Accessibility links
Planning For Haiti's Future Presents Many Challenges From the early days after the earthquake, planners have been trying to develop a long-term recovery plan to address some of Haiti's long-standing problems. But competing needs — rebuilding infrastructure, providing social services, restoring forests — are making it difficult to work out a comprehensive plan for recovery. 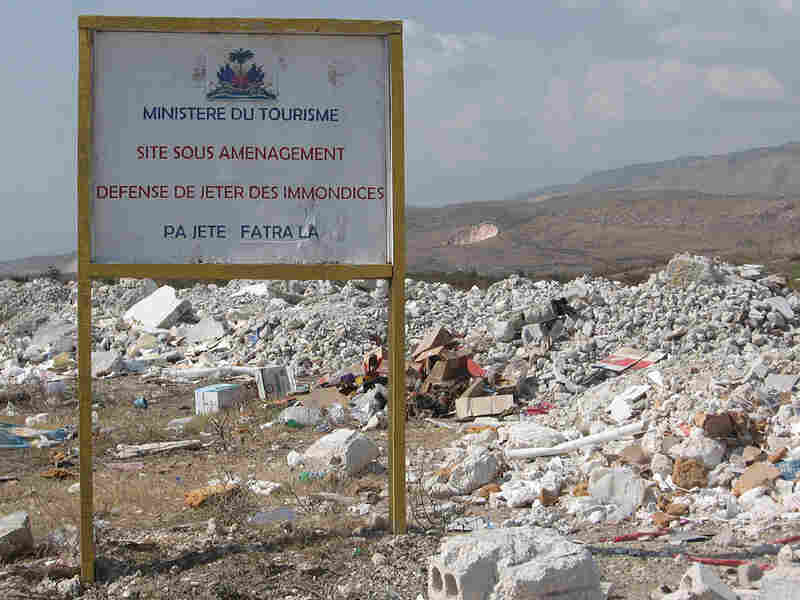 15 minutes outside of Port-au-Prince, along the shoulder of National Road 2, a sign from the Department of Tourism instructs people not to throw garbage. But this site has now become a makeshift dump, where rubble from the Jan. 12 earthquake is piled as far as the eye can see. Richard Harris/NPR hide caption 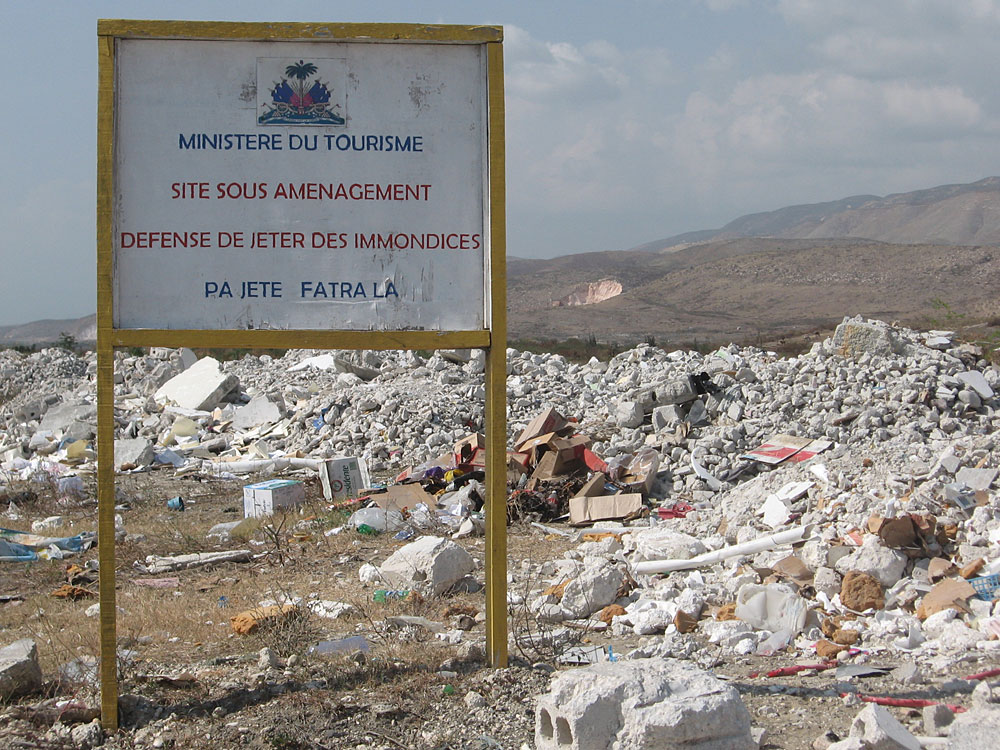 15 minutes outside of Port-au-Prince, along the shoulder of National Road 2, a sign from the Department of Tourism instructs people not to throw garbage. But this site has now become a makeshift dump, where rubble from the Jan. 12 earthquake is piled as far as the eye can see.

Some of the decisions made now in Haiti's relief efforts will affect the people and the nation for decades to come. So, since the early days of the crisis, a few planners have been trying to seize the opportunity to develop a recovery plan that can address some of the problems that have long crippled Haiti.

One obvious example has to do with the rubble from the estimated 200,000-plus buildings that were damaged beyond repair during the Jan. 12 earthquake. Front loaders and backhoes are already hard at work, clearing away some of that rubble. But so far, there's no formal plan about where to put it.

As a result, some rubble ends up in a massive pile about 15 minutes outside of Port-au-Prince, along the shoulder of National Road 2. A sign here from the Department of Tourism instructs people not to leave garbage, but in fact this has become an informal dump, stretching as far as the eye can see.

Muralee Thummarukudy from the United Nations Environment Program had been hoping to avoid precisely the kind of problem posed by this makeshift dump site. "This material is extremely valuable, and it might even have a commercial value in a few months," he says. "But that is not realized at this point of time."

Chunks of broken cinderblock may not be suitable for rebuilding Port-au-Prince, but they can be put to use, if Haiti decides to tackle some of its festering problems, such as the lack of an adequate road system, or the need for hurricane shelters along the low coastal plain.

"There will be temporary roads which need to be built," Thummarukudy says. "There will have to be land which has to be raised, so when the hurricane comes, the new camps which will be set up will be above the flooding level."

Debris disposal is one of the most visible issues in Port-au-Prince, but there are many other decisions now that will affect Haiti for decades to come.

Take the problem of sewage. Port-au-Prince is one of the largest cities in the world that doesn't have a central sewer system. It uses mostly septic tanks and pit toilets.

Pierre Yves Rochat works for Haiti's national water and sewer authority, DINEPA. He's been trying to cope with both the crisis and Haiti's long-term needs. "We hope that by dealing with sanitation in an emergency we will get a lesson learned, to improve sanitation in the normal situation," he says.

The biggest dream would be to create a sewer system for Port-au-Prince, but Rochat says that's simply too ambitious. "I think sewage system at a very large scale is not really a pragmatic solution," Rochat says. But he adds it might be possible to install some more centralized septic systems, so that wastes can be trucked away and treated according to international standards.

There's an even bigger long term question, which is whether it's worth trying to rebuild all of Port-au-Prince. Andrew Morton, who is the United Nation's chief earthquake scientist in Haiti, says it's technically quite possible to build structures that will be strong enough to survive the next quake — but at a significant cost.

"Is it affordable?" he asks. "And is it appropriate to spend that money on a very, very heavy investment essentially in concrete when the budget should also be balanced against essential social services like education and health? So it comes down, in some respects, to a question of money."

And if the money's there, others say, why not use it to replant trees across Haiti's deforested countryside, or to restore the nation's badly degraded farmland? After all, environment degradation crippled Haiti's economy even before the earthquake.

Big ideas and big aspirations are necessary, but Kim Bolduc, who heads the U.N. humanitarian efforts in Haiti, says they aren't enough. "You know the international community has been present in Haiti for a long time, many decades. We still cannot say we did a good job on Haiti. And [this] is maybe the chance for us to do it," she says.