Accessibility links
The Teen Brain: It's Just Not Grown Up Yet Scientists used to think teenage brains are just like those of adults — with fewer miles on them. But they're not. Teens' brains are developmentally different. One neurologist mother decided to get to the roots of her son's maddening behavior. 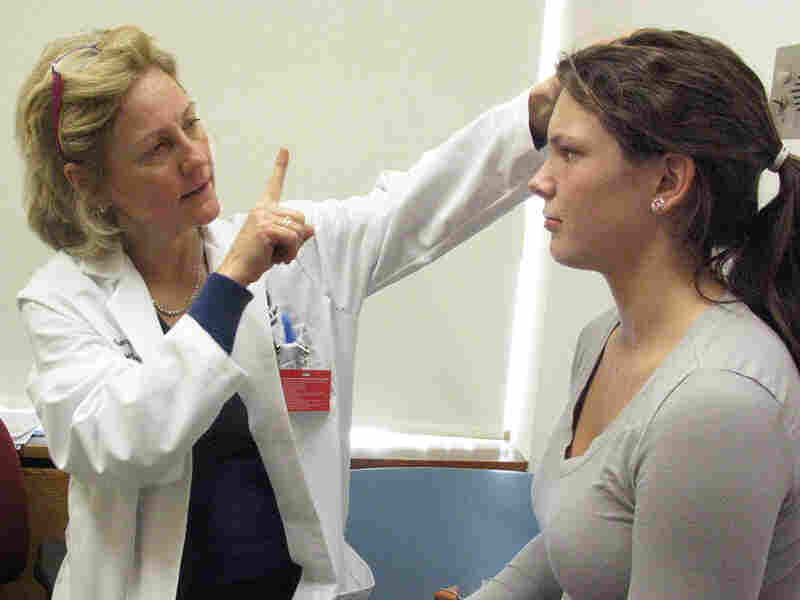 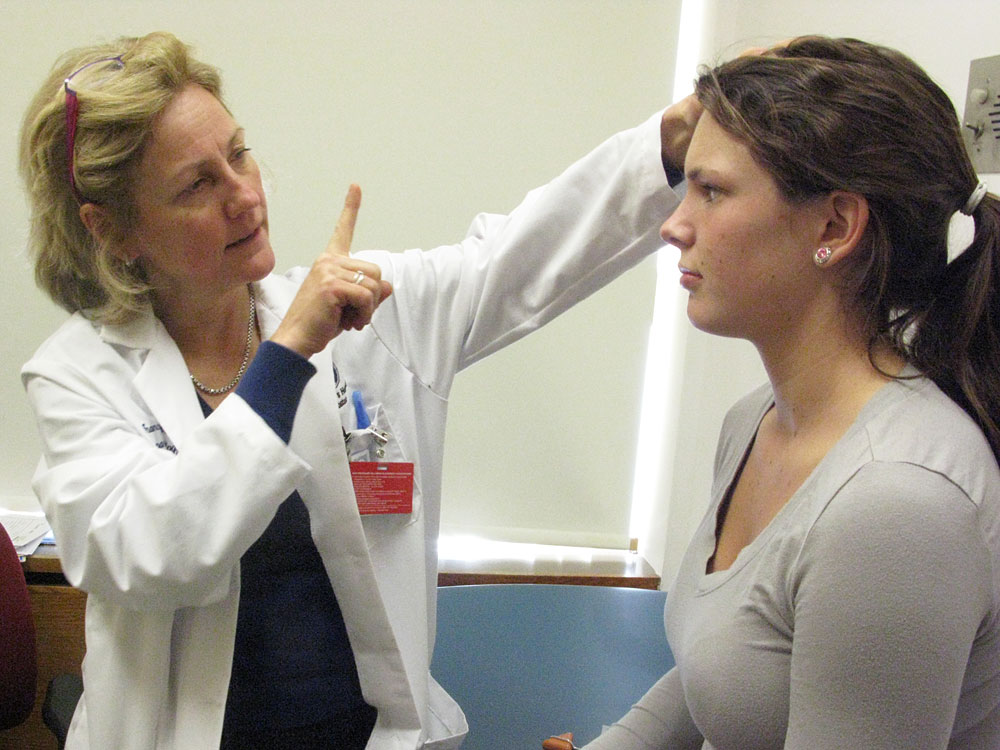 Neurologist Francis Jensen examining a teenage patient. Jensen decided to study the teenage brain when her own sons became teenagers. Now Jensen lectures to teens and parents about how teenagers' brains are different.

When adolescence hit Frances Jensen's sons, she often found herself wondering, like all parents of teenagers, "What were you thinking?"

"It's a resounding mantra of parents and teachers," says Jensen, who's a pediatric neurologist at Children's Hospital in Boston.

Like when son number one, Andrew, turned 16, dyed his hair black with red stripes and went off to school wearing studded leather and platform shoes. And his grades went south.

"I watched my child morph into another being, and yet I knew deep down inside it was the same Andrew," Jensen says. Suddenly her own children seemed like an alien species.

Jensen is a Harvard expert on epilepsy, not adolescent brain development. As she coped with her boys' sour moods and their exasperating assumption that somebody else will pick up their dirty clothes, she decided to investigate what neuroscientists are discovering about teenagers' brains that makes them behave that way. 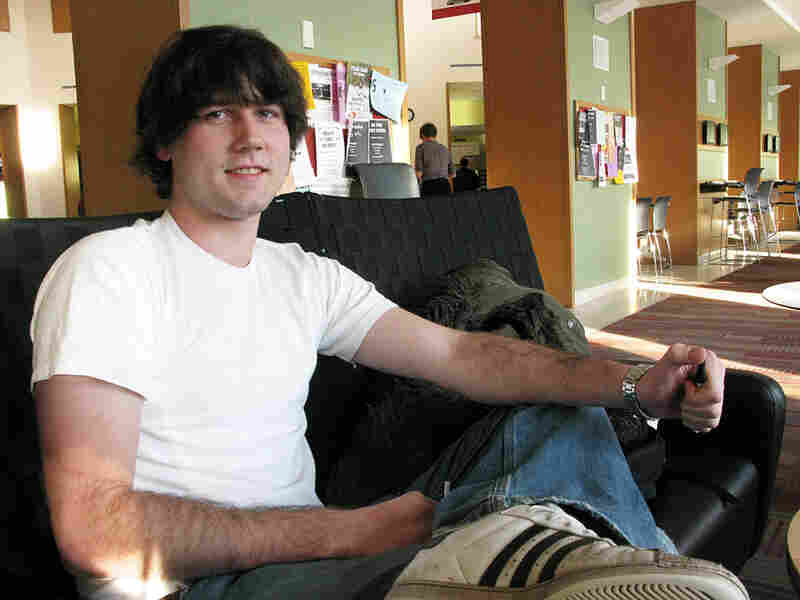 Jensen's older son Andrew Murphy, now a physics major at Wesleyan, is the reason his mother first started studying the teenage brain. She wanted to find out what was causing his maddening teenage behavior. Richard Knox/NPR hide caption 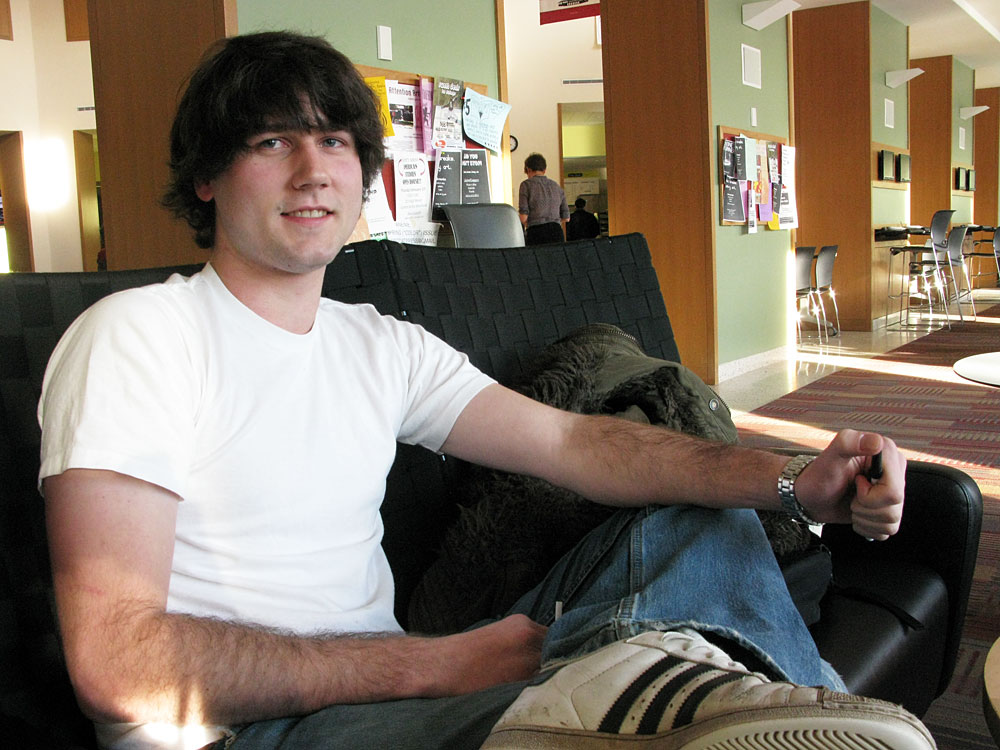 Jensen's older son Andrew Murphy, now a physics major at Wesleyan, is the reason his mother first started studying the teenage brain. She wanted to find out what was causing his maddening teenage behavior.

She learned that that it's not so much what teens are thinking — it's how.

Jensen says scientists used to think human brain development was pretty complete by age 10. Or as she puts it, that "a teenage brain is just an adult brain with fewer miles on it."

But it's not. To begin with, she says, a crucial part of the brain — the frontal lobes — are not fully connected. Really.

"It's the part of the brain that says: 'Is this a good idea? What is the consequence of this action?' " Jensen says. "It's not that they don't have a frontal lobe. And they can use it. But they're going to access it more slowly."

That's because the nerve cells that connect teenagers' frontal lobes with the rest of their brains are sluggish. Teenagers don't have as much of the fatty coating called myelin, or "white matter," that adults have in this area.

Think of it as insulation on an electrical wire. Nerves need myelin for nerve signals to flow freely. Spotty or thin myelin leads to inefficient communication between one part of the brain and another. 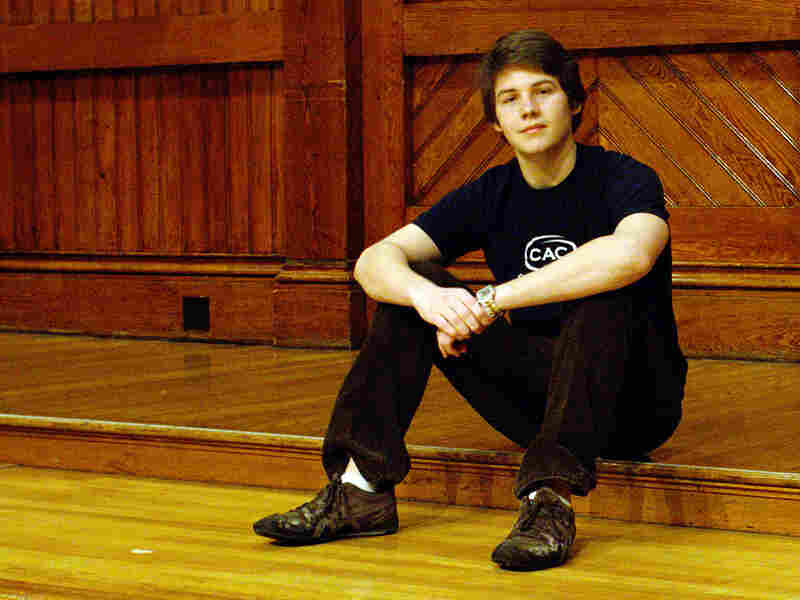 Jensen's younger son Will Murphy is now a Harvard student. He says he learned a lot about his teenage brain from his mother. Kathryn C Reed hide caption 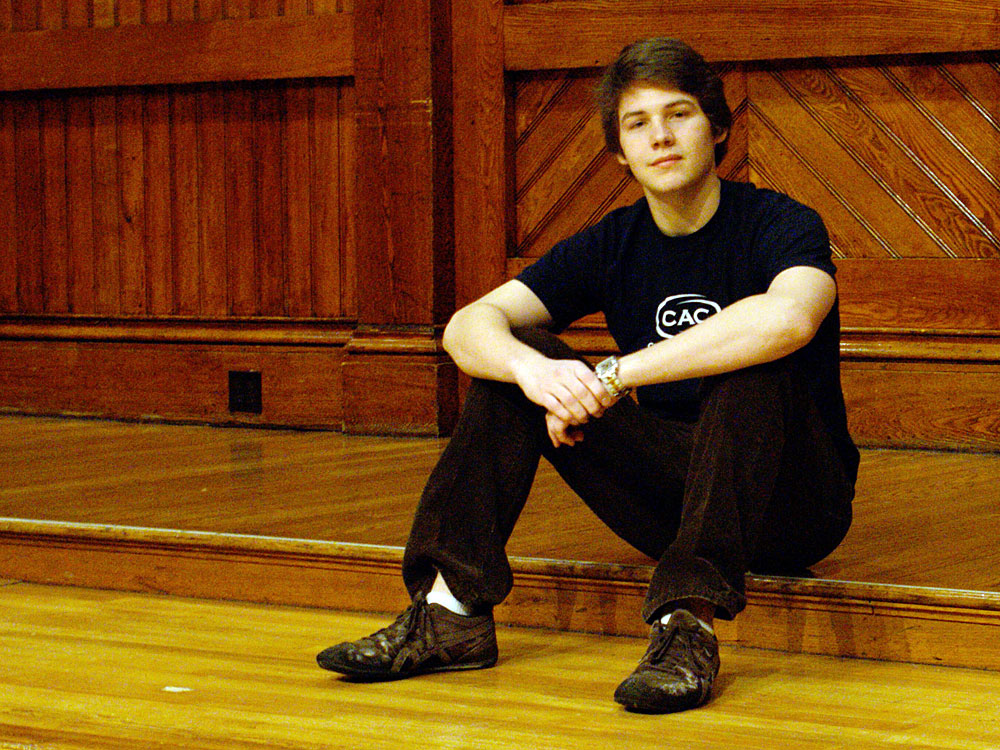 Jensen's younger son Will Murphy is now a Harvard student. He says he learned a lot about his teenage brain from his mother.

Jensen thinks this explains what was going on inside the brain of her younger son, Will, when he turned 16. Like Andrew, he'd been a good student, a straight arrow, with good grades and high SAT scores. But one morning on the way to school, he turned left in front of an oncoming vehicle. He and the other driver were OK, but there was serious damage to the car.

"It was, uh, totaled," Will says. "Down and out. And it was about 10 minutes before morning assembly. So most of the school passed by my wrecked car with me standing next to it."

"And lo and behold," his mother adds, "who was the other driver? It was a 21-year-old — also probably not with a completely connected frontal lobe." Recent studies show that neural insulation isn't complete until the mid-20s.

This also may explain why teenagers often seem so maddeningly self-centered. "You think of them as these surly, rude, selfish people," Jensen says. "Well, actually, that's the developmental stage they're at. They aren't yet at that place where they're thinking about — or capable, necessarily, of thinking about the effects of their behavior on other people. That requires insight."

Teen Brains Are Not Fully Connected

The brain's "white matter" enables nerve signals to flow freely between different parts of the brain. In teenagers, the part that governs judgment is the last to be fully connected.

But that's not the only big difference in teenagers' brains. Nature made the brains of children and adolescents excitable. Their brain chemistry is tuned to be responsive to everything in their environment. After all, that's what makes kids learn so easily.

But this can work in ways that are not so good. Take alcohol, for example. Or nicotine, cannabis, cocaine, ecstasy ...

"Addiction has been shown to be essentially a form of 'learning,' " Jensen says. After all, if the brain is wired to form new connections in response to the environment, and potent psychoactive drugs suddenly enter that environment, those substances are "tapping into a much more robust habit-forming ability that adolescents have, compared to adults."

So studies have shown that a teenager who smokes pot will still show cognitive deficits days later. An adult who smokes the same dose will return to cognitive baseline much faster.

This bit of knowledge came in handy in Jensen's own household.

When Will asked why, his mom could give him chapter and verse on drugs and teen brains. So they would know, she says, "that if I smoke pot tonight and I have an exam in two days' time, I'm going to do worse. It's a fact."

There were other advantages to having a neuroscientist mom, Will says. Like when he was tempted to pull an all-nighter.

"She would say, 'read it tonight and then go to sleep,'" he says. "And what she explained to me is that it will take [what you've been reading] from your short-term memory and while you sleep you will consolidate it. And actually you will know it better in the morning than right before you went to sleep."

It worked every time, he says.

It also worked for Andrew, the former Goth. He's now a senior at Wesleyan University, majoring in physics.

"I think she's great! I would not be where I am without her in my life!" Andrew says of his mom.

For any parent who has survived teenagers, there are no sweeter words.