Accessibility links
Discovering The Michael Jordan Of Curling The undefeated Canadian men's team plays Norway for the curling gold medal on Saturday. By all accounts, Canada has the best curler — some say the best ever. In fact, an opponent recently called Kevin Martin "the Michael Jordan of curling." But can even that comparison get a curling newbie excited about the sport of sliding stones on ice? 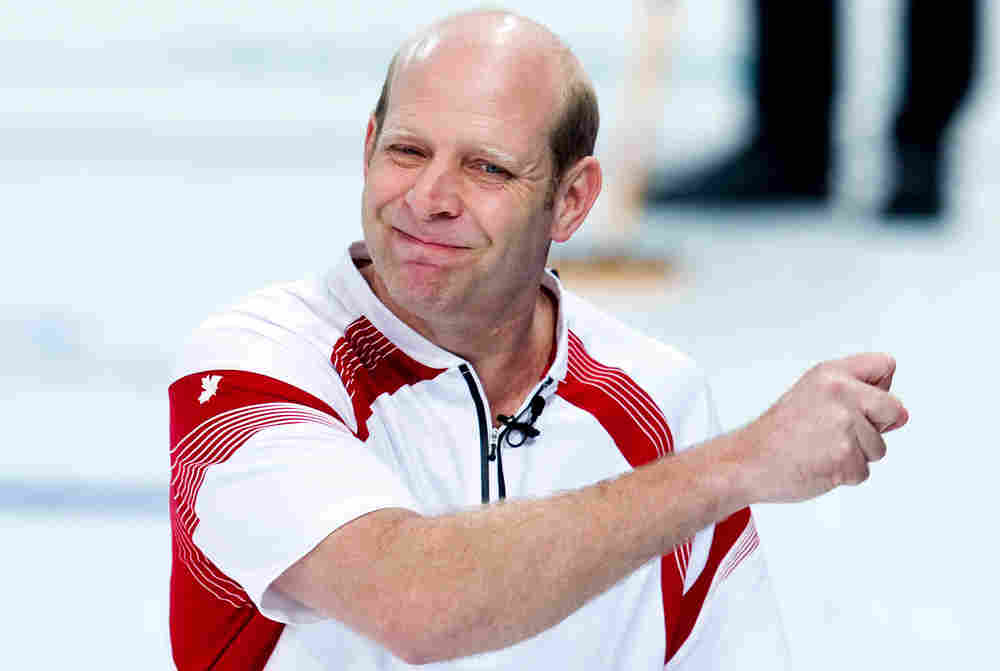 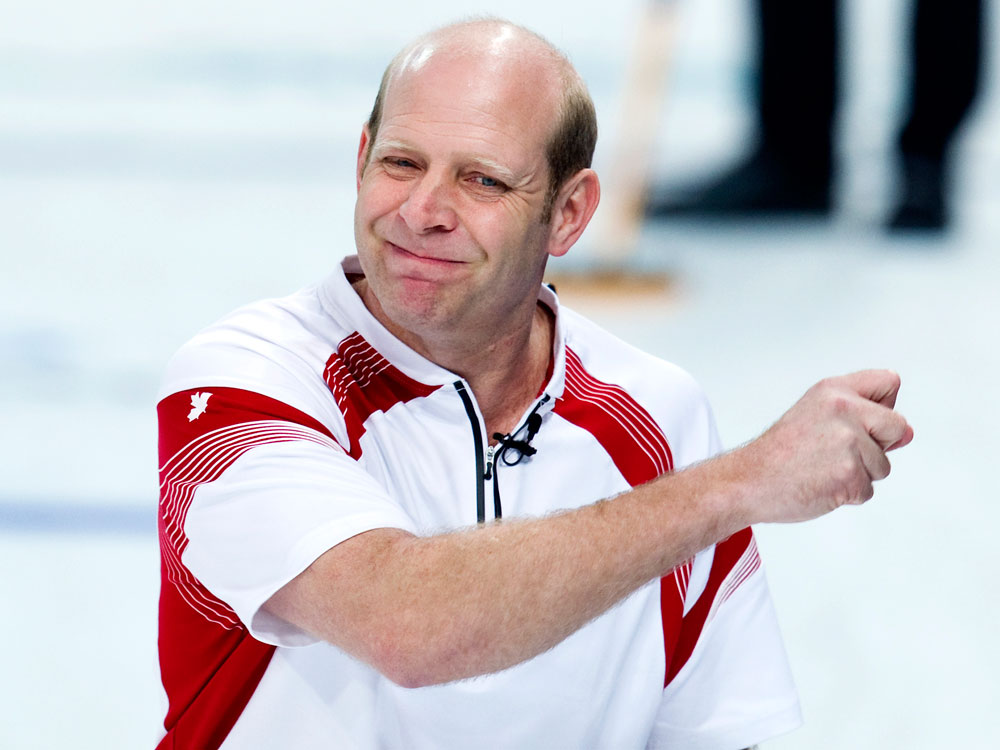 Canada skip Kevin Martin reacts after a shot in the second end while playing against Sweden during Olympics semifinal action on Thursday. An opponent recently called Martin "the Michael Jordan of curling."

At the Vancouver Winter Olympics, the Canadian men's curling team plays Norway on Saturday for the gold medal. The finals are fitting place for the undefeated Canadians — they're from a country that's crazy about the sport of sliding stones across a sheet of ice. And they have, by all accounts, the best curler.

Get a breakdown of just how curling works.

Some call Canadian skip Kevin Martin the best ever. In fact, an opponent recently called Martin "the Michael Jordan of curling." And that got NPR's Tom Goldman interested.

I've spent these Winter Olympics trying to find an entree into the fascinating and oft-maligned sport of curling. I wanted to understand it, because making fun of it? That story's old and tired.

Then I read the Michael Jordan comparison in a local newspaper — and that was my in. Because I know Michael Jordan. We all do. The dunks, the championships, the awe-inspiring shots with the tongue hanging out.

Armed with those visions, I went to the athletes' village and met up with the man behind the comparison — John Shuster, the skip of the U.S. Olympic team.

Confused already? The skip is essentially the leader of the four-man curling team — or rink. The skip, Shuster says, is the master strategist — the player who best sees how the stones line up after they're slid; who sees opportunities for where to slide the stones to earn points. 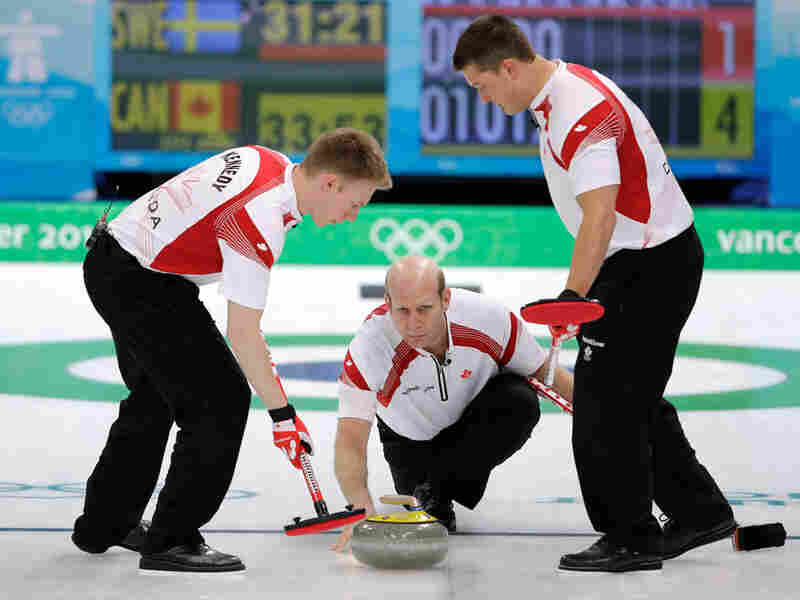 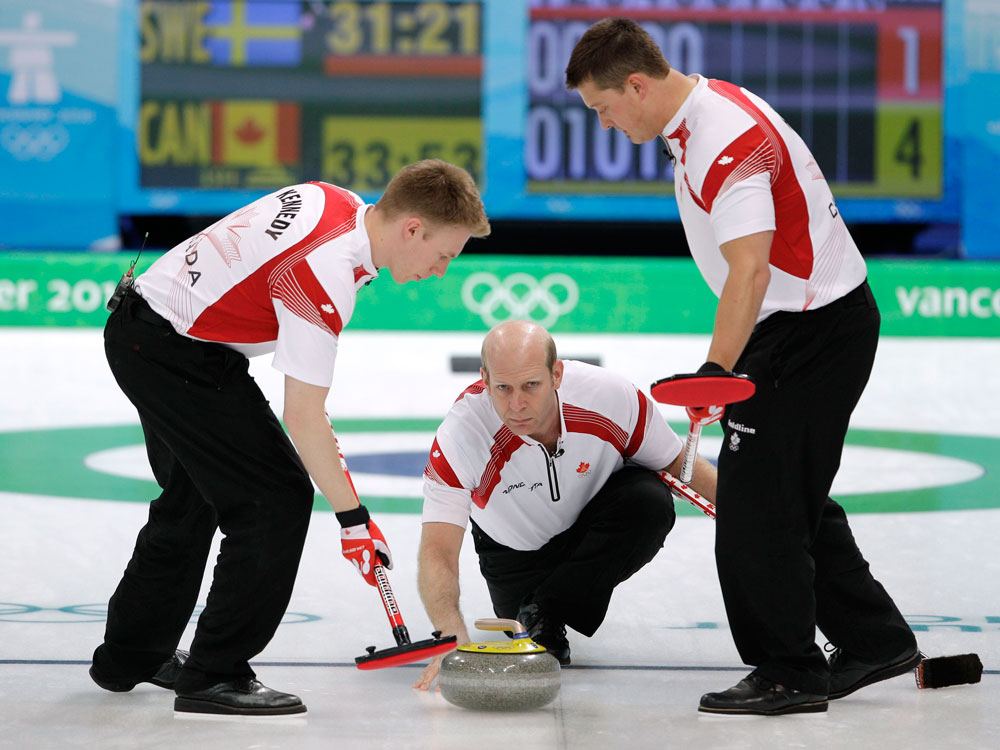 Martin delivers the stone for his sweepers Marc Kennedy (left) and Ben Hebert in the semifinal match against Sweden.

The skip is always thinking ahead — like a good pool player. And no one does it better, Shuster says, than 43-year-old Kevin Martin.

Strategy and execution don't exactly conjure up images of Jordan-esque feats of impossibility. I pressed Shuster for examples. What exactly sets Kevin Martin — they call him "K-Mart" — apart?

Shuster recounted a moment from the United States' loss to Canada during these Olympics. (Bear with him on the curling details.)

In Defense Of The American Skip

During this Olympics, John Shuster became Twitter's favorite symbol of failure. NPR blogger Linda Holmes says that's largely because nobody paid any attention to him before. Read more:

The game was 2-1 in the sixth end (an end is like an inning in baseball) and the United States had a chance to earn "a bunch of points," Shuster says. Then, Martin "threw a rock to the backside four foot and they steal one."

"And I come down to him and I said, 'You know ... you just played a shot that many people in our world are afraid to play. And there was only one spot you could put that rock and you guys had the guts to do it and you had the ability to put it there.' "

Now, that's what I'm talkin' about — guts and delivering the shot! MJ on ice!

So, Thursday, I went to Canada's semifinal game against Sweden and watched Martin's shot in the fifth end earn Canada a pivotal two points.

His teammates called the shot a "game changer." Afterward, a reporter mentioned that the game was scary at the start, with the Swedes in top form.

Martin was quick to give his opponents credit. "They played so well!"

As he stood in front of me, I tried to think "Jordan," but I couldn't stop seeing Jerry Lundegaard — that gee-whiz car salesman played by William H. Macy in the movie Fargo. But I had to move beyond appearances. (By the way, Martin is bald like MJ. Well, OK, he's got fringe on the sides — but close.)

I tried to listen to Martin carefully. He talked about playing in the gold-medal game and having a chance to win it all after almost doing so in 2002, when he won a silver at the Salt Lake City Olympics.

And, sure enough, I heard a Jordan-esque fire-in-the-belly competitiveness — Canadian-style.

"I roll with punches pretty good. So it definitely won't be the end of the world if we don't win, but I seriously want to get up that podium one more step."

An entire nation will be rooting for him to take that step. If he does, I can already hear the new ad campaign: "I wanna be like Kevin."

OK, it needs work, but you get the point.