Accessibility links
Solar Storms Could Be Earth's Next Katrina Every few decades, the sun experiences a particularly large storm that can release as much energy as 1 billion hydrogen bombs. Officials from Europe and the U.S. say an event like that could leave millions on Earth without electricity, running water and phone service. The northern lights dance over the Knik River near Palmer, Alaska. Activity on the surface of the sun creates this natural light show, but severe solar storms could devastate Earth's power and water utilities, and knock out communications. Bob Martinson/AP hide caption 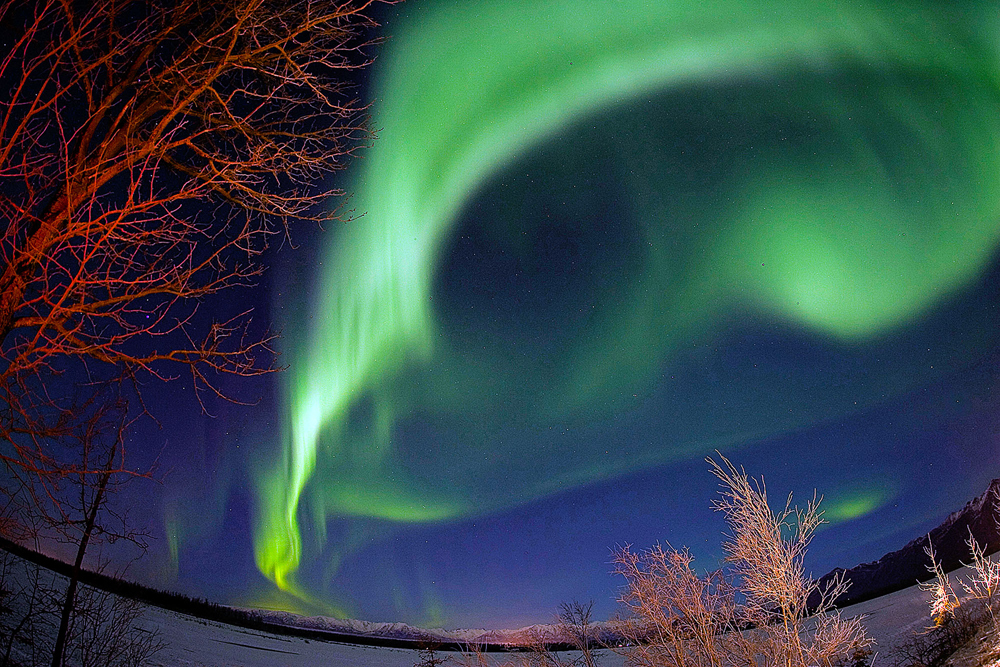 The northern lights dance over the Knik River near Palmer, Alaska. Activity on the surface of the sun creates this natural light show, but severe solar storms could devastate Earth's power and water utilities, and knock out communications.

A massive solar storm could leave millions of people around the world without electricity, running water, or phone service, government officials say.

That was their conclusion after participating in a tabletop exercise that looked at what might happen today if the Earth were struck by a solar storm as intense as the huge storms that occurred in 1921 and 1859.

Solar storms happen when an eruption or explosion on the surface of the sun sends radiation or electrically charged particles toward Earth. Minor storms are common and can light up the Earth's Northern skies and interfere with radio signals.

Every few decades, though, the sun experiences a particularly large storm. These can release as much energy as 1 billion hydrogen bombs.

How Well Can We Weather The Solar Storm?

The exercise, held in Boulder, Colorado, was intended to investigate "what we think could be close to a worst-case scenario," says Tom Bogdan, who directs the Space Weather Prediction Center in Boulder. The Center is a part of the National Oceanic and Atmospheric Administration.

"It's important to understand that, along with other types of natural hazards, (solar) storms can cause impacts," says Craig Fugate, Administrator of the Federal Emergency Management Agency (FEMA), who also took part in the tabletop exercise.

Bogdan and Fugate say that eventually there will be another storm as big as the ones in 1921 and 1859 — a sort of solar Katrina.

But the impact is likely to be far worse than in previous solar storms because of our growing dependence on satellites and other electronic devices that are vulnerable to electromagnetic radiation.

Ten or 20 minutes later electrically charged particles "basically took out" most of the commercial satellites that transmit telephone conversations, TV shows and huge amounts of data we depend on in our daily lives, Bogdan says.

"When you go into a gas station and put your credit card in and get some gas," he says, "that's a satellite transaction."

Disabled Satellites Are Just The Beginning

The worst damage came nearly a day later, when the solar storm began to induce electrical currents in high voltage power lines. The currents were strong enough to destroy transformers around the globe," Bogdan says, leaving millions of people in northern latitudes without power.

Without electricity, many people also lost running water, heat, air conditioning and phone service. And places like hospitals had to rely on emergency generators with fuel for only two or three days, Bogdan says.

In many ways, the impact of a major solar storm resembles that of a hurricane or an earthquake, says Fugate.

But a solar Katrina would cause damage in a much larger area than any natural disaster, Fugate says. For example, power could be knocked out almost simultaneously in countries from Sweden to Canada and the U.S., he says. So a lot more people in a lot more places would need help.

Individuals don't need to make any special preparation for a solar storm, Fugate says. The standard emergency kit of water and food and first aid supplies will work just fine.