Accessibility links
State Budget Cuts Threaten Child Welfare Programs States facing big deficits are cutting programs to prevent abuse and protect children. This comes at a time when many on the front lines say they're seeing a growing need. More than 1,000 children die in the U.S. each year from abuse and neglect; hundreds of thousands more are affected.

Part one in a two part report 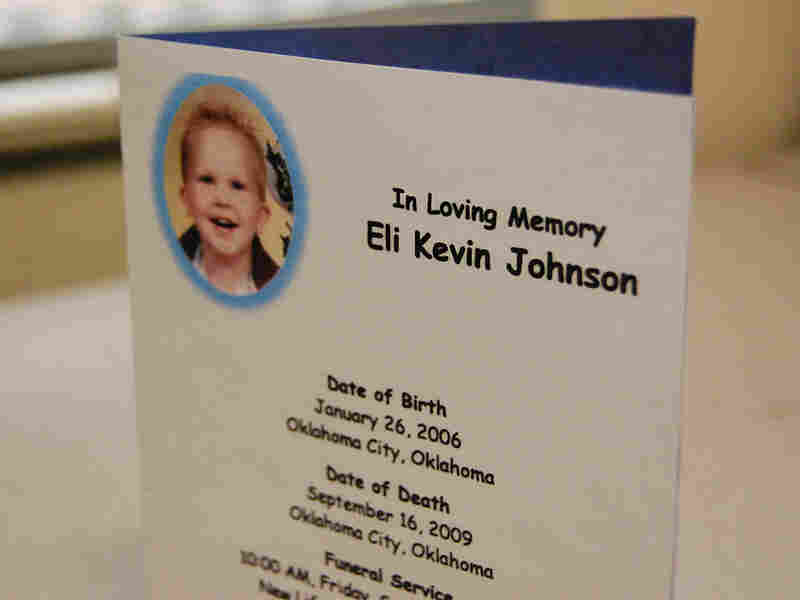 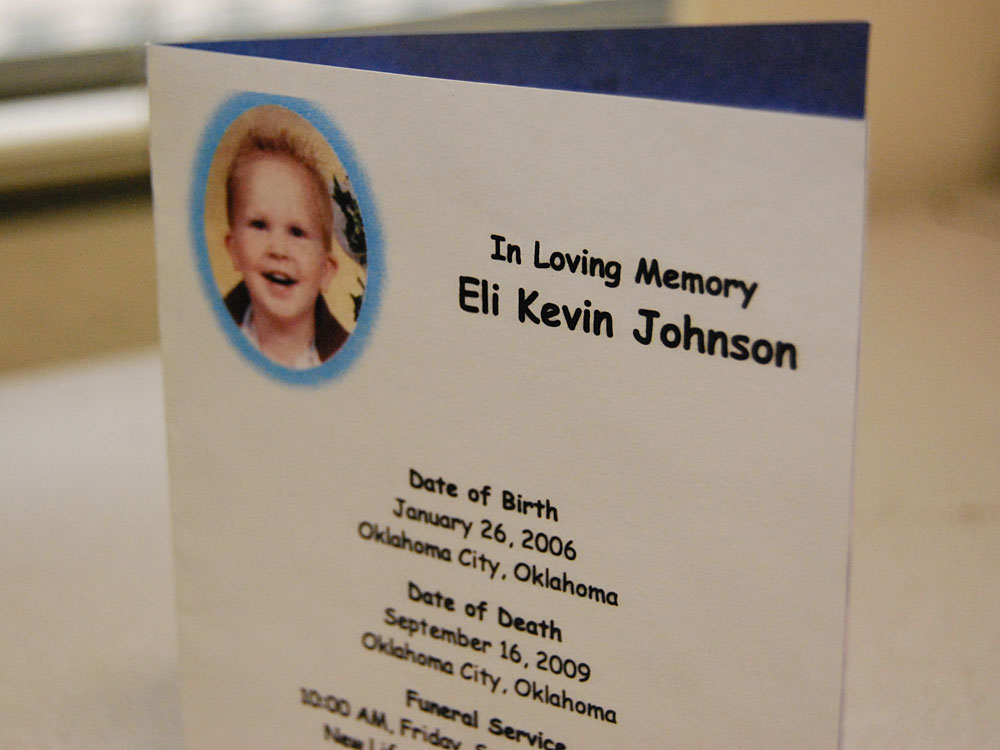 Well more than 1,000 children die in the U.S. each year from abuse and neglect. Hundreds of thousands more are affected. And a flagging economy hasn't helped.

States facing big deficits are cutting programs to prevent abuse and protect children. This comes at a time when many on the front lines say they're seeing a growing need.

Oklahoma, for example, is facing a $1.3 billion budget deficit. State programs to prevent child abuse have already been cut, and more cuts are expected. The state is also reducing its child welfare workforce by 100 positions.

But in this state, as elsewhere, child abuse and neglect remain serious problems.

Tye Nicole Johnson, left, and Eddie Valdez were arrested for the murder of Johnson's 3-year-old son, Eli, and are now in jail. Courtesy of Oklahoma County Sheriff's Office hide caption

Take the case of 3-year-old Eli Johnson, who was apparently beaten to death last year for wetting his pants. Now, his mother and her boyfriend are in jail.

Oklahoma City police say the boyfriend told them that he slapped Eli and punched him in the stomach with his fist. And that he got so angry he blacked out, and came to when he had Eli's head stuck in the water of the toilet.

"He was just a sweet little boy," says Eli's great grandmother, Evelyn Johnson. "I just cannot imagine anybody doing such a thing."

Johnson says she had suspected Eli was being abused and reported her suspicions to authorities almost a year before he died. "The signs really started about the time they decided they wanted to potty train him," she says.

Interactive Map: A State-By-State Look At Child Fatalities Due to Maltreatment In 2007
Robert Benincasa and Alyson Hurt/NPR

The result of her report? Eli's mother was required to take an anger-management class before she could get her son back. Now she and her boyfriend are awaiting trial for first-degree murder, to which both have pleaded not guilty.

The case is not so unusual. A couple of days earlier, also in Oklahoma City, a 20-year-old woman was charged with murdering her 3-month-old son, who had a fractured skull. A few weeks later, in the same city, a mother and her friend were arrested for locking her son in a closet for more than four years.

What Micah Stirling does know as she walks the halls of the Oklahoma State Capitol, not far from where Eli Johnson died, is that programs to prevent child abuse and neglect are on the chopping block because of the state's budget problems.

The Challenges Of Tracking Child Abuse

It's hard to tell whether child abuse and neglect have gone up or down since the economy soured. Many who work on the front lines, such as social workers and doctors, say they are seeing an increase in abuse cases as families struggle with joblessness and growing poverty.

But Rob Geen, who has studied the issue extensively, says that information is largely anecdotal. Geen is director of policy research for the Annie E. Casey Foundation, a charitable organization for children and families.

"When you talk to child welfare directors and we look at the data, we haven't seen an increase in caseloads yet," says Geen. "If you go back in history and take a look at the worst economic recessions that we've had, there isn't a very definite link between economic downturns and child welfare caseloads."

He says that while poverty, substance abuse and teen pregnancy can contribute to child abuse and neglect, it's difficult to say that an increase in one will lead to an increase in the other. He notes that the overwhelming majority of poor people do not abuse or neglect their children and that abuse can be found in every kind of community.

In fact, a new federal study, released last month, showed a dramatic 26 percent decline in serious child abuse cases between 1993 and 2005-2006. Some experts credit an increase in public awareness and programs to deal with potential abusers for the decrease. But the study did not cover the most recent economic downturn, which began in December 2007.

Others say that public awareness — far from reducing the number of cases — can actually boost them because people are more willing to report suspected abuse. Geen says this is especially true after a high-profile child abuse death captures local or national headlines.

Further complicating matters is that there is no federal definition for what is or isn't abuse and neglect. Something that might be considered a child abuse or neglect case in one state might not be considered one in another. Take the case of a toddler who gets outside his or her house and is hit by a car. Was it an accident or neglect?

And there are other difficulties in determining the extent of abuse and neglect. Oklahoma, for example, says confirmed cases there are down substantially, despite a bad economy. The state had 13,191 abuse cases in 2007, compared with 8,605 cases last year.

But some child advocates in the state think the numbers are down because there are fewer welfare workers to investigate abuse reports — something state officials deny.

Michael Petit is the president of Every Child Matters Education Fund, an advocacy group. He says that whether abuse and neglect cases are increasing or decreasing, the numbers are still staggering — almost 800,000 confirmed cases in 2007 and almost 2,000 deaths. Petit thinks the official numbers understate the actual incidence of abuse and neglect by as much as 50 percent.

And Geen says even if there's no evidence that the economic downturn is causing an increase in child abuse and neglect now, there could be a lag effect. He says the numbers might go up in a couple of years, as a result of cuts in programs to help struggling families and to prevent abuse.

Stirling runs the non-profit group Prevent Child Abuse Oklahoma, which gets state money to help poor and at-risk families with the challenges of parenting.

"What we're hearing is that it's unlikely anyone will be preserved at 100 percent, so we need to prepare for cuts," she says.

Stirling has come to the capitol with Charlie Swinton, a member of her board. They hope to convince lawmakers that cutting too much from programs like theirs now could cost the state more in the long run — more child deaths, more injuries and more incarcerations as abused children grow into troubled adults.

They head to the office of Republican state Rep. Doug Cox. Cox is important because he chairs the committee that oversees their funding. Swinton tells Cox that he knows some cuts are inevitable, but asks him to be kind to them.

"Micah and her staff work every day with families to raise children and keep children safe," Swinton says. "So we ask your continued support of that effort."

"Well, I appreciate that," Cox says. "You probably will not find a stronger advocate for your cause than myself because, you probably know, I'm an emergency room physician."

Cox knows all too well how serious child abuse can be. But then he says: "That being said, my other job as a state representative, as you well know — we have to balance our budget, and we're down $1.3 billion from last year."

Cox says he's also being asked to protect funds for senior citizens, children with disabilities and other safety net programs. He says he'll do his best. It's a conversation that can be heard in state capitols across the country as lawmakers struggle with record-high deficits.

After a day of meetings, Stirling has gathered lots of expressions of sympathy, but no promises. And she's worried.

"I think that we're going to find we had a much higher death rate from child abuse last year than we have in the past," she says. "I think that's a direct result of a lack of resources."

But Howard Hendrick, Oklahoma's director of human services, has a different view.

"Actually, the prevalence of child abuse and neglect, in our state at least, is dropping," he says.

He says caseloads are down, despite the economy. He thinks that's because federal stimulus funding has eased the strain on families by providing more food stamps and jobless benefits.

"Overall, we feel very confident in terms of the work that's happening in the child-welfare arena," he says.

But that confidence is not shared by all. Some in the state think caseloads are down because there are fewer workers to investigate abuse.

Hendrick's agency is also the target of a lawsuit by Children's Rights, a national advocacy group, which says Oklahoma's welfare workers are overworked and the state has failed to adequately protect children in its care.

And then there are the deaths — such as Eli Johnson's. Hendrick says he can't comment on specifics, but that overall, such cases are rare, and his workers do the best they can.

"I don't know of any child welfare worker in America who's clairvoyant and can predict the future," he says. "Every child death is a heartbreaking experience."

And it's an experience Kristin King wants to make less common. She is a nurse with the state's Children First program in Tulsa.

Among her two dozen clients is 20-year-old Brittany Ellis, a single and first-time mother. King visits Ellis twice a month at the home she shares with her mother, brother and toddler son, Elijah. King comes as much to check up on Elijah as to provide support for his mother.

The young mother tells King that her 13-month-old is starting to throw tantrums. King reassures her that it's perfectly normal.

The goal of the program is to ease the concerns of first-time, often low-income parents, and to also let them know it's normal to get frustrated sometimes with your child. The key is to learn how to respond.

King gives Ellis a handout on toilet training, and some advice.

"Never make a big deal about it," she tells Ellis. The two things a parent will not win a battle over are going to the bathroom and eating, King says.

Researchers say such home-visitation programs, which are found in many states, go a long way toward reducing abuse and neglect. But that hasn't protected them from cuts. Oklahoma's Children First program used to have 270 nurses. Now there are fewer than half that amount.