Accessibility links
Short-Term Cuts, Long-Term Consequences For Kids As cash-strapped states slash programs across the board, police chiefs and sheriffs around the country are pushing to keep funding for efforts to prevent child abuse and neglect. In Oklahoma, a safe haven for victims of the worst sexual and physical abuse is among those feeling squeezed. 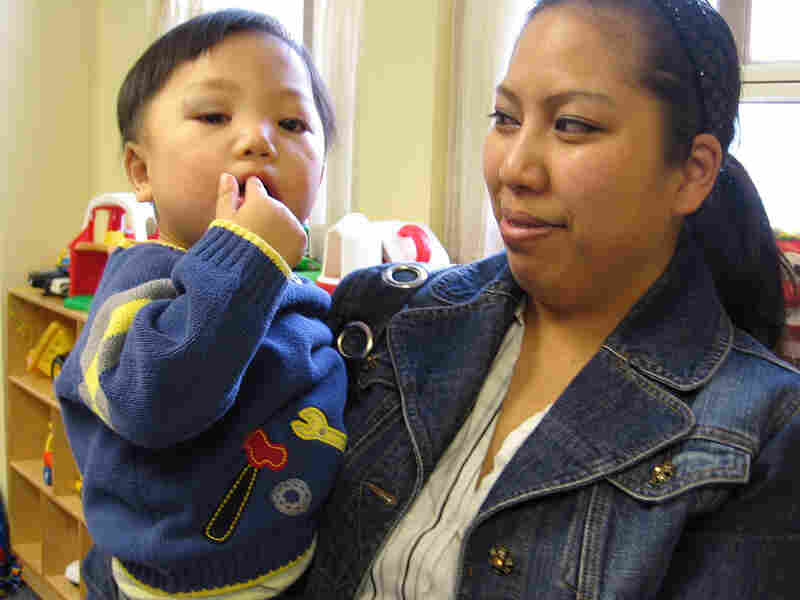 Susan Pham holds her son, Nathan. Pham meets with other mothers twice a month to discuss parenting, motherhood and life. The meetings are part of a support program for at-risk families. Pam Fessler/NPR hide caption 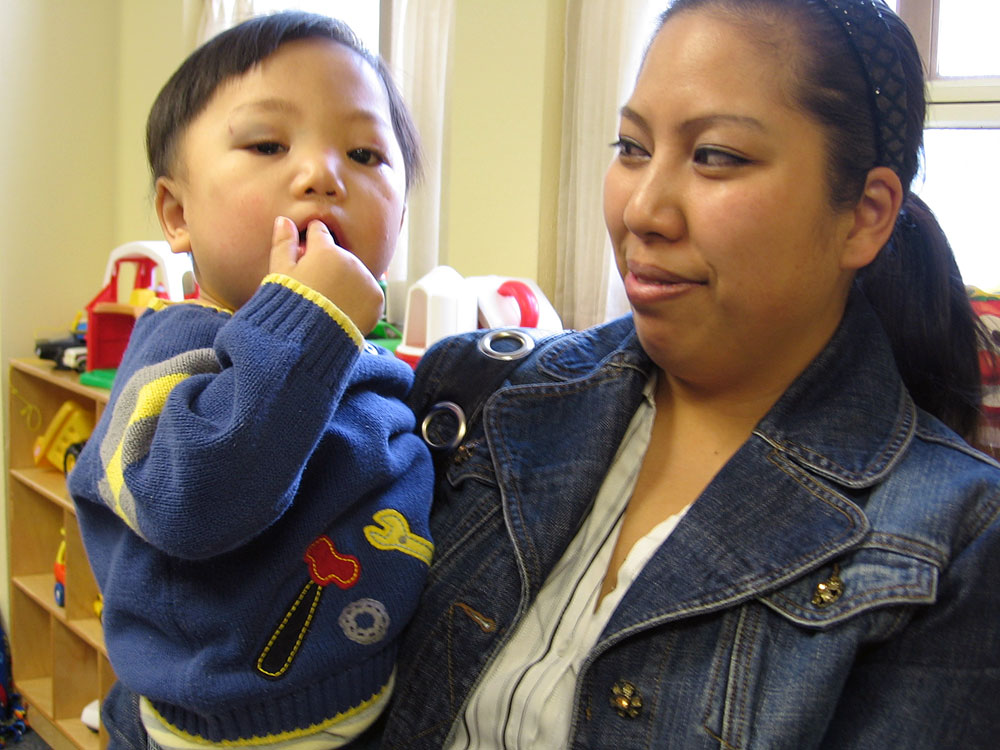 Susan Pham holds her son, Nathan. Pham meets with other mothers twice a month to discuss parenting, motherhood and life. The meetings are part of a support program for at-risk families.

Twice a month, women squeeze into tiny chairs in the basement of the First Presbyterian Church in Tulsa, Okla., in a room usually used for Sunday school. But these woman are looking for a different kind of salvation.

They are mothers enrolled in a program called Great Beginnings. Run by the Parent Child Center of Tulsa, the program targets at-risk parents — those with low incomes, substance abuse problems or other issues that make parenting especially difficult. And it is one of many social safety-net programs across the country grappling with funding cuts amid record state budget deficits.

Nationwide, such cuts have children's advocates worried about the fate of programs intended to prevent kids from being neglected and abused, at a time when people on the front lines say demand for such services is growing.

On a recent morning, the women meeting at First Presbyterian share their travails.

"There's sometimes, you know, I'll go back in the bedroom and I'll get my pillow, and Retta's in there watching cartoons, and I'll ... just scream in my pillow," Lori Moorman tells the other mothers.

Moorman has a 4-year-old daughter and a husband who's often away for work. She says even the best mothers sometimes feel like they're about to go crazy, especially if they have other stresses in their lives, which these women do — plenty of them.

"I'm sure you guys just heard the most recent crazy, bizarre thing," says Susan Pham. "He basically laid his hands on me, and I had to put him in jail." She's talking about the father of her two young boys.

Interactive Map: A State-By-State Look At Child Fatalities Due To Maltreatment In 2007
Robert Benincasa and Alyson Hurt/NPR

These mothers also face financial strains, as they try to juggle bills for health insurance, rent and day care — if they're luck enough to find work.

But here, they get to let it all out, to exchange parenting advice, mom to mom, with the help of a family support worker. Moorman says these women are friends she can rely on.

"Just having this here, it just helps just to know you're not the only one here struggling and just trying to make it from day to day," she says.

Competing With Other Services In Budget Crunch

This is one of many programs in Oklahoma funded by the state's Office of Child Abuse Prevention. Research shows that such parenting groups can limit abuse by helping at-risk mothers with the challenges of parenting.

But the state is facing a $1.3 billion budget deficit and, while lawmakers say they want to protect children, there are lots of competing demands for funds, and cuts are likely.

More To The Story

Part one of this series:

But Bill Citty, Oklahoma City's police chief, says these are the kinds of programs that pay off in the long run.

"If you really want to seriously deal with the issue of fighting crime, you invest in the types of programs that are going to give at-risk kids a healthy start," he says.

Children who've been abused are more likely to become violent criminals when they grow up. So police chiefs and sheriffs across the country are pushing to fund efforts to prevent abuse and neglect, even though it might compete with their own short-term interests.

"We need additional police officers, yeah, but it's a balance," says Citty. He adds that he can put criminals in jail all day long, but it won't get at the root of the problem.

His officers see the problems firsthand. They're often the first to respond to reports of abuse. And there's plenty of it in Oklahoma, a state where teen pregnancy and drug abuse are serious concerns. 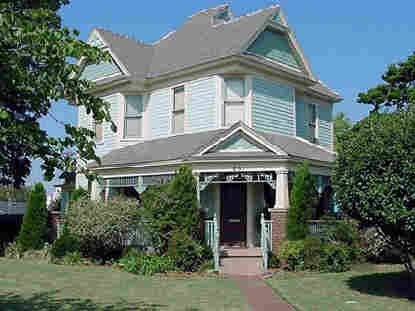 The Mary Abbott Children's House in Norman, Okla., is where the county's most serious abuse and neglect cases are investigated. Courtesy of the Mary Abbott House hide caption

One place where they're seeing an increase in cases is at the Mary Abbott Children's House in Norman. This is where the county's most serious abuse and neglect cases are investigated.

Police, welfare workers and other specialists work here side by side. They also coordinate with mental health and medical workers.

The idea is to provide a nonthreatening place where young victims can be interviewed once — not again and again by multiple agencies.

"Last week, we had interviews scheduled for about 21 children, which is probably the largest week that we've ever had," says Way. Last year, they served 652 children, almost 25 percent more than the year before.

The Mary Abbott Children's House is a cozy Victorian house, with pictures on the walls and a downstairs room filled with toys and stuffed animals where children can play while waiting to be interviewed.

But an interview room upstairs is plain, with a big two-way mirror on the wall. Outgoing director Jeannine Baker explains that they don't want toys or pictures on the walls to influence what a child might have to say about their alleged abuse. She says the children are told that there's a police officer and a welfare worker on the other side of the mirror listening in.

"They watch TV. They know there's people behind the mirror," Baker says. "We're very open about that. Some of these kids have been betrayed by every adult they know. So we're not going to lie to them."

In the center of the room, there's a small table with a large sketch pad on top. Children who've been physically or sexually abused can use it to help describe to the interviewer what happened. Sometimes they use anatomically correct cloth dolls. Baker removes a couple of them from a brown box by the wall.

"This is probably a child," she says as she holds up one of the smaller dolls. They come in all sizes and ethnicities. There are boy dolls, girl dolls, men and women. There's even a grandpa doll. Baker holds up one with gray hair on his head and chest.

Baker says that most of the children who come here are the victims of sexual abuse. Baker thinks caseloads are up because people are more willing these days to report such abuse. But she also thinks the bad economy is another reason they're seeing an increases in cases, especially of physical abuse.

Welfare worker Karla Holmes, who works at Mary Abbott Children's House, sees the pressures daily. "A lot of our parents are losing jobs, they're living in poverty, there's a lot of substance abuse around here," she says.

At the same time, budget cuts are having an impact. Mary Abbott Children's House used to have two interviewer jobs; now there are one and a half. There used to be two welfare workers here; now there's only one.

And last month, workers here were shocked when they tried to find emergency mental health services for a severely traumatized child. They called the facility down the road that they usually used, only to find that because of budget cuts, it no longer cares for young children.