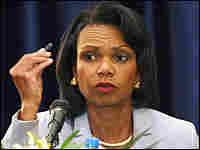 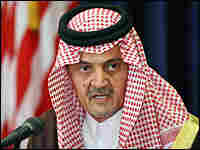 Saudi Foreign Minister Saud al-Faisal speaks during a joint press conference with US Secretary of State Condoleezza Rice and Defence Secretary Robert Gates on Wednesday. Saudi Arabia said it will send a mission to Iraq to explore the possibility of reopening its embassy there. Hassan Ammar/AFP/Getty Images hide caption

The announcement came after Secretary of State Condoleezza Rice began laying the foundation for the conference, proposed by President Bush last month, in meetings in both Israel and Saudi Arabia on Wednesday.

The proposed gathering is intended to revive the peace process and would include Israel, the Palestinians and Arab states viewed as moderate by the United States.

Speaking during a rare joint visit by Rice and Defense Secretary Robert Gates in Jeddah, Saudi Foreign Minister Prince Saud al-Faisal said his government would "look very closely and very hard at attending" if the conference dealt with "issues of real substance, not form."

Saud also said Saudi Arabia would explore opening diplomatic relations with the Shiite-led government in Iraq, an endorsement long sought by Washington. Saudi Arabia's Sunni rulers have had frosty relations with Iraqi Prime Minister Nouri al-Maliki's government and have not hidden their suspicions that al-Maliki does not have the interests of Iraq's Sunni minority at heart.

Rice's meetings with Israeli leaders in Jerusalem on Wednesday and with leaders of Mahmoud Abbas' U.S.-backed Palestinian government in the West Bank on Thursday will be her first with the sides since the regional political constellation was altered by Hamas' violent seizure of control of Gaza Strip from Abbas' forces.

Speaking at a press conference in Jerusalem, Rice said she was "encouraged by the attitude that I have seen here among all of the parties about the prospects of this international meeting."

However, Rice said in response to a question about Saudi participation, "I think it's too early ... to issue invitations and certainly too early to expect people to say whether they will attend."

Olmert's office said that the regional meeting would be able to "grant an umbrella to the bilateral talks between Israel and the Palestinians."

The Hamas takeover in Gaza has spurred a flurry of peacemaking efforts in the past month aimed at shoring up Palestinian moderates.

Those efforts have included a first visit to the region by international Mideast peace envoy Tony Blair and an unprecedented visit to Israel by a delegation from the 22-nation Arab League. That delegation urged Israel to accept an Arab plan offering peace in return for a withdrawal from all land captured in the 1967 Mideast War.

Further helping the mood of conciliation are the fears in moderate Arab states about the influence of Hamas' hardline backers in Iran and about al-Qaida's brand of extremist Islam.

Israel has carried out several gestures meant to bolster Abbas, including renewing the transfer of millions of dollars in taxes collected from Palestinians and releasing several hundred Palestinian prisoners from Israeli jails.

Bush's July 16 announcement of a Mideast conference was meant to build on the new momentum and work toward the establishment of a Palestinian state.

Palestinian officials said it was time to move from gestures to discussing the core issues of the conflict — the borders of the future Palestinian state, the status of Jerusalem and the fate of Palestinian refugees who lost their homes in the fighting that followed Israel's creation in 1948.

"The main topic will be the political negotiations," Palestinian negotiator Saeb Erekat said of Rice's meetings with Abbas and Palestinian Prime Minister Salam Fayyad on Thursday. "We don't want a new initiative."

In Rice's meeting with Barak, the two are slated to discuss American plans for a major arms sale to Gulf Arab states, including Saudi Arabia, and a parallel boost in defense aid to Israel, Israeli defense officials said, speaking on condition of anonymity because they were not authorized to talk to the press.

Israel loudly opposed such arms sales in the past but has offered no resistance this time, saying the weapons were needed to offset Iran's military strength.