Accessibility links
Reconciliation Won't Be Smooth Ride For Health Bill Senate leaders are about to go head-to-head once again over a health care overhaul. Democrats are preparing to use a Senate procedure known as reconciliation to bypass a GOP filibuster in an effort to pass a health care overhaul. But Republicans can still throw up plenty of roadblocks, says Robert Dove, the preeminent expert on Senate rules. He previews the road ahead. 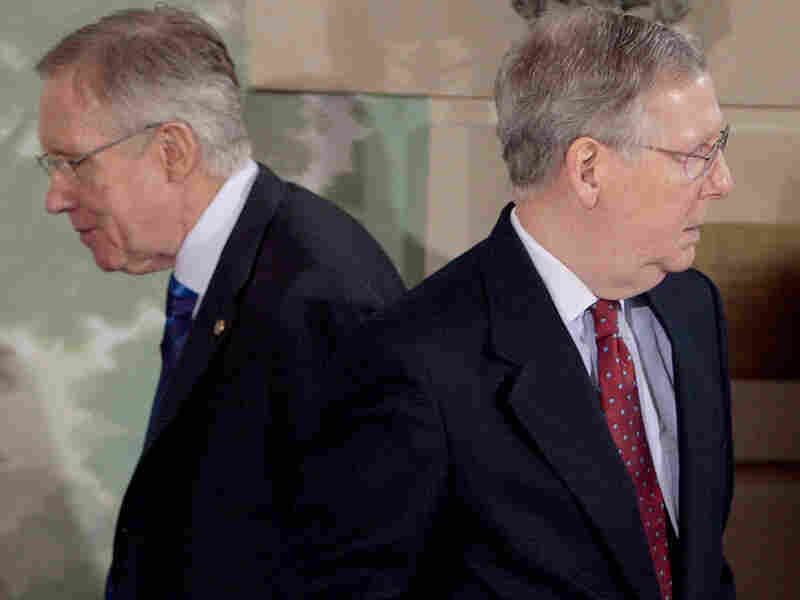 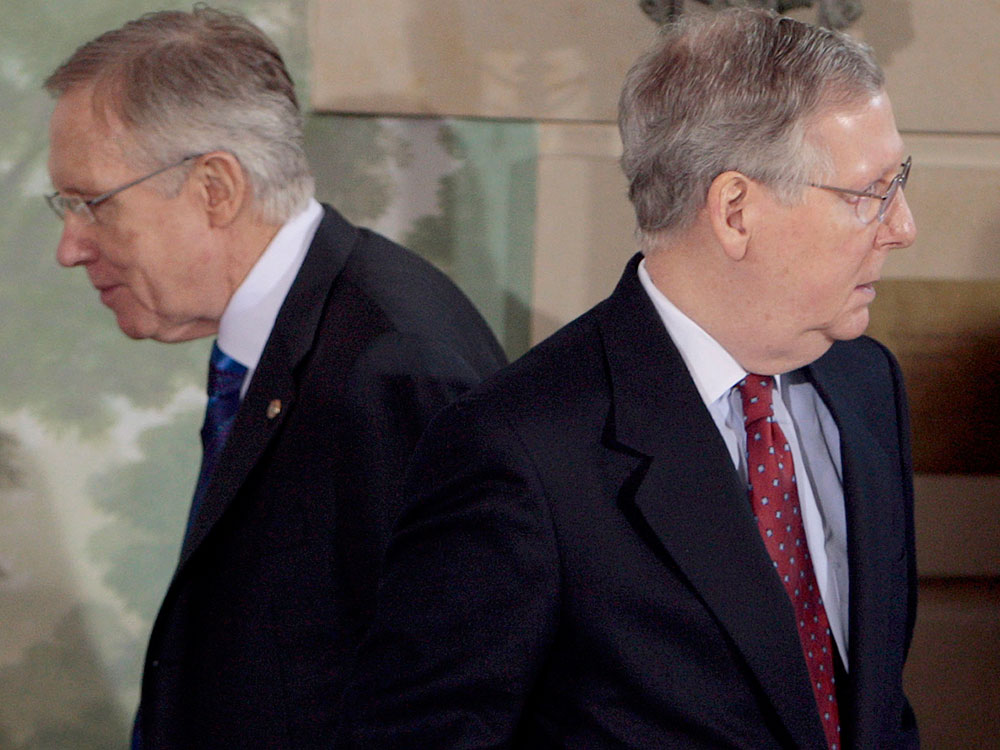 Senate Majority Leader Harry Reid, D-Nev. (left), claimed that "no one has talked about reconciliation" except the Republicans. Senate Minority Leader Mitch McConnell of Kentucky (right) plans to fight this procedural maneuver.

Democrats face a bumpy road ahead as they prepare an attempt to pass a version of health care overhaul legislation by using a Senate procedure that circumvents a GOP filibuster. So who better to explain how the coming weeks may unfold on the Hill than the man who helped write the road rules?

Robert Dove is the preeminent expert on the rules of the U.S. Senate: He served in its parliamentary office for more than three decades, heading it for a dozen years before his 2001 retirement.

The budget reconciliation process has been used to pass major health care legislation before. Among the changes passed using the procedure:

1986 — COBRA: The Consolidated Omnibus Budget Reconciliation Act allowed people who were laid off to keep their health coverage, and stopped hospitals from dumping ER patients unable to pay for their care

Dove helped write the Congressional Budget Act of 1974, which contains the filibuster-busting provision called "reconciliation," and, as parliamentarian, he presided over many such maneuvers. The process allows the Senate, under certain restrictions, to pass legislation with a simple majority vote. Dove, a professor at George Washington University and lawyer with Patton Boggs, sat down with NPR after President Obama's health care summit last week.

He predicted a messy process ahead — one that could give important, but not unprecedented, power to current Senate parliamentarian Alan Frumin. He knows the pressure Frumin faces: Dove, once a top aide to Republican Sen. Bob Dole of Kansas, became an ex-parliamentarian nine years ago after a disagreement with GOP leaders over a rules interpretation.

NPR: What are the special rules the Senate must follow in debating and amending reconciliation legislation that contains changes to the already-approved House and Senate bills?

DOVE: Debate — that's easy: Total [Senate] debate on a reconciliation bill is limited to 20 hours. Amendments, that's much harder. There is no limit to how many you can send. And you can send amendments of whatever length and have them read.

This seems to allow much room for the minority party to delay a vote on a reconciliation bill. How might this play out?

I can remember Sen. Dole sending up, attached to an amendment, the United States Code. [The code is the compilation of every Unites States law.] That got peoples' attention. After he had gotten what he wanted, he asked for unanimous consent to dispense with the reading.

Doesn't that become a virtual filibuster?

It becomes a way of people forcing votes on many things that senators don't want to vote on. Despite the fact that amendments [to reconciliation bills] have to be germane and cannot violate the Byrd Rule [see below], that doesn't stop senators from sending amendments that are totally out of order, and then asking for a vote on waiving the Budget Act [rules] to allow them. That vote counts as a real vote and is used against senators who can claim they were protecting the budget process, but suddenly are on record as refusing to waive [rules] to deal with Guantanamo Bay, or trying terrorists in New York City. I can imagine the list of amendments that will be sent forward.

You mention that Senate reconciliation amendments are required to pass the "germane" test, which was in the original Budget Act, and also not violate the Byrd Rule, which was added later. What do those prescribe?

The germane test is very narrow: Basically, all you can do is play around the edges of something that's already in the bill. It doesn't mean because you're dealing with the subject matter of health care that anything dealing with health care is germane — not at all. It is a very nice test for people who have written the bill, because they know that things that they didn't deal with aren't going to be available as amendments on the floor.

But the Byrd Rule, which was adopted in 1985, complicated that? [The rule was named after Democratic Sen. Robert Byrd of West Virginia, who devised it as a budget-balancing maneuver.]

The initial Budget Act limited amendments by saying they had to be germane, but that was supplemented by the Byrd Rule. And that has a whole series of things that are not in order as amendments to reconciliation bills. Some are very simple. For example, any provision that has no effect on the budget — doesn't increase it, doesn't decrease it — is not in order. But some of them are very difficult. One test requires that if something actually does [affect the budget], it becomes the duty of the parliamentarian to go into the motives of why the provision is there.

How might that "motives provision" play out, given differences in the current Senate and House bills — including whether proposed federal subsidies may be used to purchase insurance plans that cover abortion?

In 1995 there was a provision that absolutely disallowed any federal funds for abortion. The Congressional Budget Office determined that it was going to save money. But it was my view that the provision was not there in order to save money. It was there to implement social policy. Therefore I ruled that it was not in order and it was stricken. That is a tough rule: to go into the motives of people who have either amendments, or have put provisions into bills.

What happens if senators disagree with the parliamentarian's ruling, and the presiding chair — whether it's Vice President Joe Biden, who is officially the Senate president, or a Democratic senator — rejects the recommendation and issues his or her own ruling?

Under the Budget Act, rulings by the chair can only be overturned by 60 votes. That means that the vice president or whoever is sitting in the chair, plus 41 senators, can effectively control the procedure. For Republicans to overturn a ruling of the vice president or presiding chair, they would not only need their 41 members, they would need 19 more votes to overturn.

Have you ever seen a Senate chair overrule the parliamentarian?

It could happen, but, so far, since Hubert Humphrey, who was vice president when I came to the Senate, that has not been the practice.

Do you agree, as some have suggested, that under the rules of Senate reconciliation, the country could end up with a health care bill shaped by the chamber's parliamentarian?

That would be correct if this was starting de novo as a reconciliation bill. It's not. There are already a lot of provisions in the Senate bill that was passed in December not under reconciliation. And those provisions will still apply — unless they are contradicted by reconciliation.