Accessibility links
Maryland Town Recalls Racial Unrest in 1967 The small town of Cambridge, Md., went up in flames 40 years ago this summer. A speech by black activist H. Rap Brown helped incite unrest there. But the town's problems were rooted in a painful history of racial discrimination.

The small town of Cambridge, Md., went up in flames 40 years ago this summer. A speech by black activist H. Rap Brown helped incite unrest there. But the town's problems were rooted in a painful history of racial discrimination.

Flames of Cambridge Stoked by Decades of Division 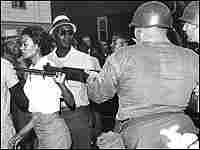 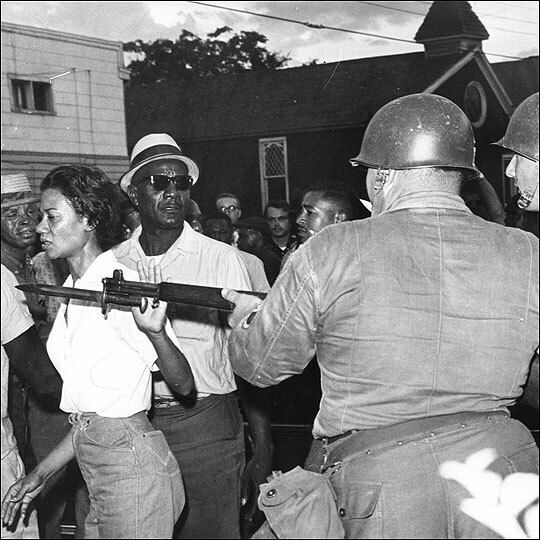 Gloria Richardson, head of the Cambridge Nonviolent Action Committee, pushes a National Guardsman's bayonet aside during a 1963 protest. 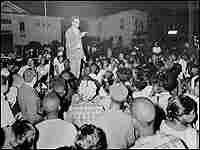 Activist H. Rap Brown speaks to a crowd in Cambridge, Md., in July 1967. After the speech, arsonists set fire to a nearby school. Corbis hide caption 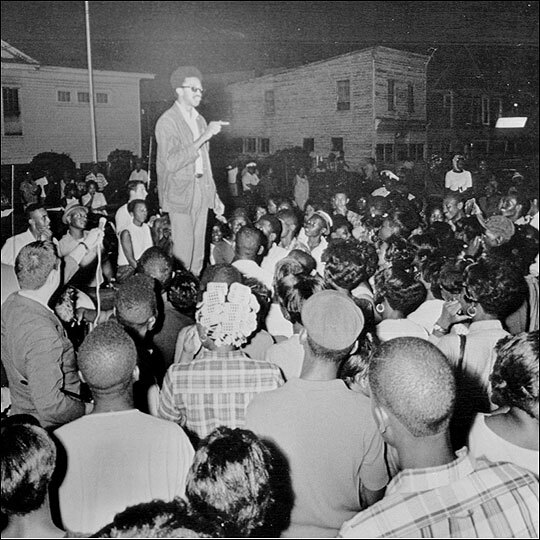 Activist H. Rap Brown speaks to a crowd in Cambridge, Md., in July 1967. After the speech, arsonists set fire to a nearby school.

Race Then and Now

Racial unrest spread quickly from Newark, N.J., and Detroit to smaller communities like Cambridge, Md. A look back at the riots.

In the summer of 1967, the racial tensions that had been simmering for years boiled over in a paroxysm of violence across the country. While there had been riots in African-American neighborhoods before — most notably in the Watts section of Los Angeles in 1965 — the long, hot summer of 1967 saw fire-bombings, looting and confrontations with police in more than 150 cities and towns, from Hartford to Tampa and Cincinnati to Buffalo.

The worst of the unrest was in Detroit and Newark, N.J. — big cities where African-Americans set fires and looted businesses in their own neighborhoods, traded gunfire with police and otherwise vented their frustration at the slow pace of social change three years after passage of the Civil Rights Act. Less well-remembered are the many small cities and rural towns that were swept up in the strife, places like Plainfield, N.J., and Cambridge, Md.

Cambridge, 90 miles from the nation's capital, quickly drew the attention of federal authorities at the highest level. It became a place where small-town life, small-town attitudes and small-town troubles intersected with national politics.

Cambridge was a depressed, working-class town of 13,000 with a harbor and a canning factory on the eastern shore of the Chesapeake Bay. Residents like barber Bob Parks remember how blacks and whites worked side-by-side in the crabbing companies on the bay, but others, like longtime resident Sylvia Windsor, recall the physical and psychological divide between the two communities.

"One side of Race Street was for the whites and one side was for the blacks, and they never crossed over and we never did either," Windsor says.

Black resident Enez Stafford Grubb remembers not being allowed to use the swimming pool, skating rink or other public facilities while growing up in Cambridge. Years after the Supreme Court's 1954 desegregation ruling in Brown v. Board of Education, Maryland's Dorchester County, where Cambridge is the county seat, maintained separate schools for blacks and whites. Grubb attended a blacks-only school.

"Whenever we received a textbook, it was a used textbook, and there was always a slip with the name of white students by the time we got it," she says.

A few years before the summer of '67, the Freedom Riders, who were trying to integrate buses crossing state lines, came to Cambridge. There was also a large demonstration on U.S. Route 40 after a visiting African diplomat complained he could not stop along the highway between Baltimore and Cambridge.

African-Americans in Cambridge had been holding sit-ins, rallies and church meetings, agitating for their civil rights. The Student Nonviolent Coordinating Committee sent activists into the town. But as historian Peter Levy points out in his book, Civil War on Race Street, not all the protests were peaceful. Several businesses were fire-bombed, shots sometimes rang out and blacks and whites carried weapons.

In 1963, Attorney General Robert F. Kennedy summoned black and white community leaders from Cambridge to Washington. He hoped to mediate a truce by suggesting that the town adopt an equal rights amendment to its charter. The measure passed the town council, but the black population, knowing the amendment would never win approval in a referendum, boycotted the vote.

One of the Cambridge black activists who met with Kennedy was Gloria Richardson. She later moved to New York, where she met H. Rap Brown, the black power activist who preached a message of violence: Only through force could African-Americans win their rights. In the summer of 1967, Richardson invited Brown to deliver the angry stump speech he was giving across the nation to the blacks of Cambridge.

Resident Lemuel Chester recalls how on July 24, 1967, Brown climbed atop a car and told the crowd, "If Cambridge doesn't come around, Cambridge got to be burned down." Not long after his speech, shots rang out, Brown was hit by buckshot, and he fled the town.

Within hours of Brown's speech, someone did set fire to the Pine Street Elementary School in the black section of town. The whites-only local volunteer fire department, citing fears of being attacked, refused to go in and put out the flames. Two blocks and 20 buildings burned to the ground. There was no looting that night, but the event would come to be known as a riot.

The finger-pointing began immediately, and most fingers pointed to Brown. Maryland Gov. Spiro Agnew, who had rushed to Cambridge the morning after the fire, said, "I hope they pick him up soon, put him away and throw away the key."

Until then, Agnew had enjoyed the support of some Maryland blacks, who believed him to be sensitive to their concerns. But the 1967 unrest in Cambridge is now seen by some historians as a turning point in his career. Agnew took a tough law-and-order approach, issuing the following statement: "It shall now be the policy of this state to immediately arrest any person inciting to riot, and to not allow that person to finish his vicious speech."

Cambridge would set the stage for the governor's tough response to rioting the next year in Baltimore and brought him to the attention of Richard Nixon, who would choose Agnew as his running mate in 1968.

Just a few days after the riot in Cambridge, on July 28, President Lyndon Johnson convened the National Commission on the Causes of Civil Unrest — better known as the Kerner Commission for the Illinois governor who chaired it. Johnson believed outside agitators, even foreigners or communists, must have been to blame for the rioting and arson that engulfed so many cities and towns like Cambridge.

But the Kerner Commission dismissed that notion. A report by the commission's staff specifically addressed the situation in Cambridge and found that, contrary to popular belief, blame for the events of July 24, 1967, could not be pinned on H. Rap Brown. The report, leaked to The Washington Post, said the cause of the unrest lay in years of systematic discrimination against the black population of Cambridge.

The story on Cambridge, Md., was produced by Rachel Guberman and recorded by Drew Reynolds and Kurt Stalnaker.