Accessibility links
Limited Understanding Of Animals In Theme Parks SeaWorld's whale shows have resumed after an orca killed a trainer. The incident raises questions about keeping animals in captivity. Amy Sutherland talks about what we know and don't know about animals in amusement parks. 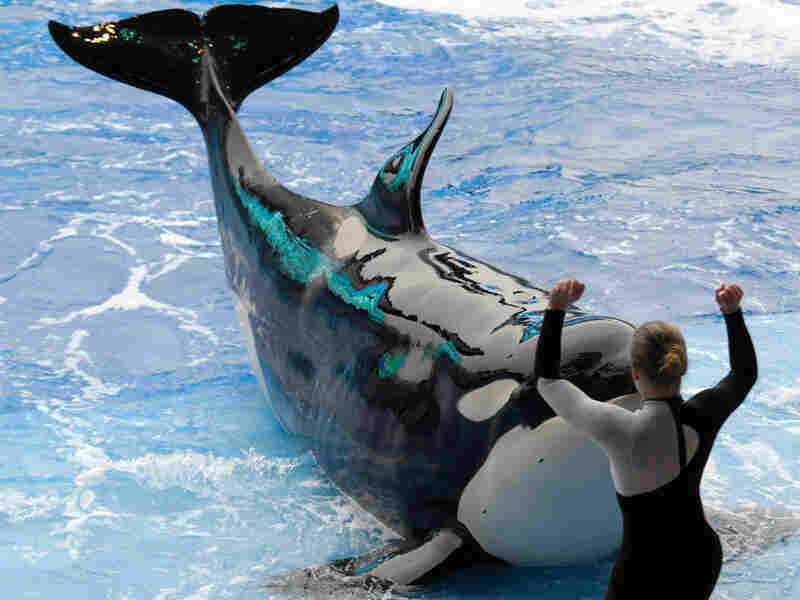 A SeaWorld trainer performs with a killer whale during the first show after an orca killed a trainer at the theme park three days earlier in Orlando, Fla. Phelan M. Ebenhack/AP hide caption 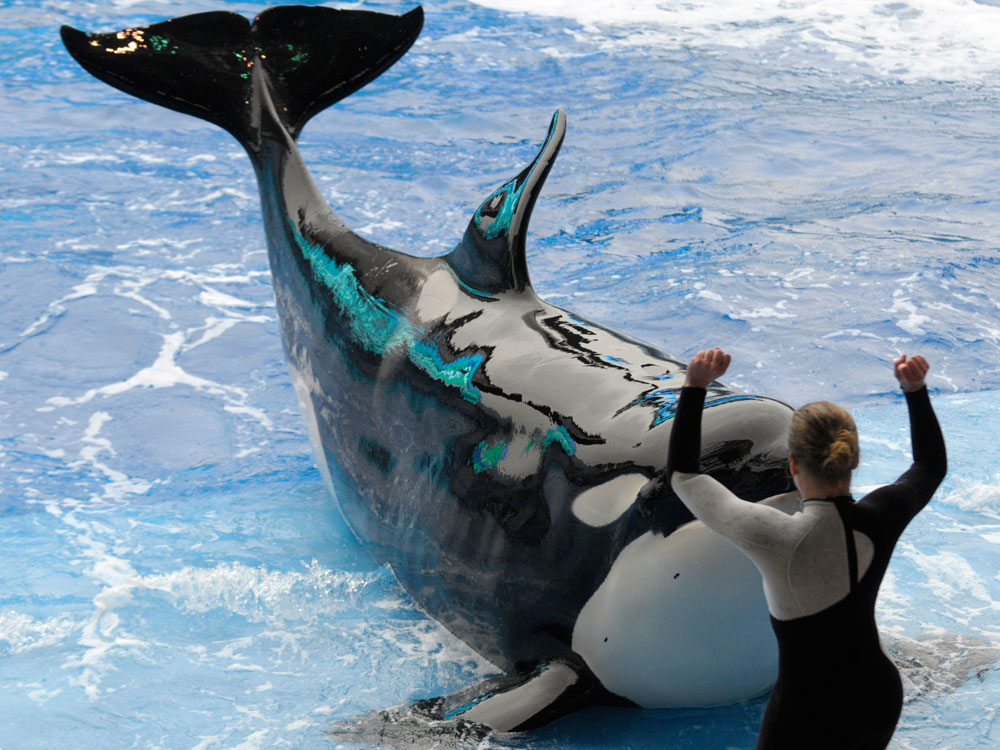 A SeaWorld trainer performs with a killer whale during the first show after an orca killed a trainer at the theme park three days earlier in Orlando, Fla.

SeaWorld's whale shows have resumed after an orca killed a trainer. The incident raises questions about keeping animals in captivity, and why we think we understand what goes on in the minds of whales.

Amy Sutherland, author of What Shamu Taught Me About Life, Love, and Marriage, and Kicked, Bitten, and Scratched: Life and Lessons at the World's Premier School for Exotic Animal Trainerstalks about what we know and don't know about animals in amusement parks.

Sutherland is quick to credit exotic animal trainers, who "know far more than us average Joes," and know they're always taking a calculated risk with their physical safety when working with the animals.

However, Sutherland tells host Neal Conan, the animals will always "be unknowable to some extent," and are "fundamentally unpredictable... They respond to stimuli and things they see differently, and they respond to it in a blink of an eye."

Back in 2008, journalist and author Amy Sutherland came on this program to talk about her column, which turned into a book, "What Shamu Taught Me About Life, Love, Marriage: And Lessons For People From Animals and Their Trainers." After the awful incident last week in SeaWorld, we've asked her back.

As you probably know, an orca named Tilikum drowned and killed a trainer just after a show, leaving spectators horrified. The shows have since resumed, but many questions are being asked about how much we really understand about the whales and dolphins who perform for our amusement.

A couple of points: Accidents, even deaths, are not new in this business -rare, but not unheard of. And we should note that Amy Sutherland is a writer and not a trainer herself. So what lessons should we draw from SeaWorld? Our phone number: 800-989-8255. Email us: talk@npr.org.

Journalist Amy Sutherland joins us now from member station WGBH in Boston. Her most recent book, again, "What Shamu Taught Me About Life, Love and Marriage: Lessons For People From Animals and Their Trainers." And thanks very much for coming back with us.

Ms. AMY SUTHERLAND (Author): Hi, Neal. Thanks for having me back.

CONAN: And I wonder, what lessons do you draw from this incident?

Ms. SUTHERLAND: You know, I was just thinking about it, as you said that, I don't know that I draw any specific lessons because I did so much reporting in the world of exotic-animal training. And so this is always a risk for them, and you just hope that it never happens. And unfortunately, in this case, it did. And so - I mean, I think that these trainers look so wonderful and glamorous, and it's easy to forget that they are always taking a calculated risk with their physical safety when they work.

CONAN: And it seems that we've come such a long way in understanding the behaviors of these animals.

CONAN: But you do wonder, how much do we really understand?

Ms. SUTHERLAND: Well, I - you know, I think the - you know, the trainers know far more than us Average Joes. But the thing is, is that they are wild animals, and they are always going to be unknowable, to a certain extent, until we either learn to speak orca or they learn to speak English. And that's not going to happen.

CONAN: Mm-hmm. Because that's something they need for survival, obviously. And...

CONAN: And if we were in that situation, we might have - reacting quickly, too. But nevertheless, as we think about the psychology of these animals, they are wild animals. They are kept in captivity. And is this an occasion to rethink that?

Ms. SUTHERLAND: Well, you know, when I did research for the book - prior to the Shamu book, which was a book about the top school for exotic-animal training -I did a lot of reading back into history about keeping animals and having zoos and training animals. And this is something that is been with mankind since about, you know, from an antiquity, if not sooner on. And my guess is as soon as we could figure out a way to keep animals - certainly we did with dogs and domestic animals - we started doing that and not long after, exotics.

So to me, it's not so much a question: Is it right or is it wrong? It just seems to be something fundamental to being human. So in that case, what I would always want is that the animals are in the best possible circumstances and really well-cared for.

You're listening to TALK OF THE NATION from NPR News.

And you write a lot about - in your book - I went back and reread the interview. And you talk about a lot about the danger of anthropomorphizing, yet these...

CONAN: ...these shows are a lot about anthropomorphing(ph).

Ms. SUTHERLAND: Right. And, you know, I would say - now you've mentioned that, I mean, those shows are very anthropomorphic, but also not. I mean, they're designed to appeal to human beings, but they're also educational - though that may not always be apparent to people. They're designed to show a lot of the naturalistic behaviors the animals would do on their own.

But you know, one lesson to draw from this, especially from all the coverage, is how quick we are to project our human emotions and rationales into a situation where they don't belong.

CONAN: Oh, that this was somehow premeditated by the - on the animal's part.

Ms. SUTHERLAND: Right. Right. Like the - we're sort of - the coverage has been, about this whale, is like he's got a long rap sheet and was a serial killer, and - you know what I mean? That he's, you know - and it's really not that. And that's sort of looking at it from a human point of view. I mean, he - you know, whatever he was thinking, you know, what he primarily did was grab her ponytail and pull her into the pool and probably, just play with her.

Ms. SUTHERLAND: And it's not that he was sort of, you know, calculating how he was going to take this trainer out because she didn't give him enough mackerel.

CONAN: Yeah. And let's get a caller on the line. This is Aaron. Aaron is with us from Jackson in Michigan.

AARON (Caller): Hi, good afternoon. I was wondering if there was correlation between the incident as a potential abuse by the trainer, because these animals are pretty intelligent. Like you were saying, they obviously don't have forethoughts of malice to the extent that we do. But they have shown the capacity to plan ahead, work towards a common goal, be it in groups or singly. And I'd just like to ask that. I'll take the question off the air.

CONAN: Okay. Thanks very much, Aaron.

Ms. SUTHERLAND: They are very intelligent and they can organize - it appears they can organize hunting in the wild. But I would say that this is not tied to any abuse. They work with these animals only with positive reinforcement. They do not use any punishment. And that's - punishment is defined in the broadest terms. And so it would not be related to that because these whales just wouldn't experience that.

I think, you know, it's more likely that the ponytail just sort of caught his eye. And if you see the video footage beforehand...

Ms. SUTHERLAND: ...there's some video online of the session leading up to this attack. Her - she had a substantial ponytail. So anyhow, it just sort of swung out in front of his mouth. And why he grabbed it, we'll really never know.

CONAN: We've been doing a series on the show last week, and we'll continue it this week, looking at the five Oscar documentaries nominated for best documentary in this year's Academy Awards...

CONAN: ...which is about a man named Ric O'Barry, who was the original dolphin trainer for the "Flipper" series, and has since come to believe that any captivity for dolphins or any cetaceans - and that would obviously include orcas, or killer whales...

CONAN: ...is a terrible thing for humans. I wonder if you've seen that picture, if you've had any reaction to it.

Ms. SUTHERLAND: I haven't seen that picture. You know, the thing is, is that it's easy to say that these animals should not be in captivity, you know, to be at a cocktail party and just say that, or wherever. But the fact is, is these animals were raised in captivity. And so to just release them into the wild would be extremely unethical and put them at tremendous risk. So I think you have to be realistic about what you're proposing. So that's really not an option for any animal that's raised in captivity.

CONAN: It was bred - born and bred in captivity.

Ms. SUTHERLAND: Right. Right. Now, he was not born in captivity, my understanding of Tilikum. But he's been in for a quite, quite a long time, so too long to be released.

CONAN: And that was - well, obviously, when there was "Free Willy." And the...

CONAN: ...orca was finally released, it was under very careful conditions. And in fact, we really don't know what happened.

Ms. SUTHERLAND: Right. And we never will. But like, in the case of Tilikum - I mean, killer whales live with their pods and, you know, he couldn't just swim out into the ocean by himself and expect to have a very long life. He would need to be rejoined with a group that he was familiar with. I mean...

CONAN: And that would accept him, as well. Yeah, yeah.

Ms. SUTHERLAND: ...and so that's just not going happen. Right.

Ms. SUTHERLAND: I mean, it sounds like a good idea in theory, but not in practice.

CONAN: Amy Sutherland, thanks very much for your time today. We appreciate it.

CONAN: Amy Sutherland, the author of "Kicked, Bitten and Scratched: Life Lessons at the World's Premier School for Exotic-Animal Trainers" - that was her first book. She joined us today from member station WGBH in Boston.

Tomorrow, nearly two months since the earthquake that flattened much of Port-au-Prince, we'll talk about picking up the pieces in Haiti. Join us for that.

This is TALK OF THE NATION from NPR News. I'm Neal Conan, in Washington.