Accessibility links
Strict Building Code May Explain Lower Chile Toll The recent earthquake in Chile was much stronger than the earthquake that shook Haiti last month, but far fewer people have died in Chile. One reason seems to be that Chile has strict building codes to deal with large quakes. Eduardo Kausel, a professor of engineering at the Massachusetts Institute of Technology offers his insight.

The recent earthquake in Chile was much stronger than the earthquake that shook Haiti last month, but far fewer people have died in Chile. One reason seems to be that Chile has strict building codes to deal with large quakes. Eduardo Kausel, a professor of engineering at the Massachusetts Institute of Technology offers his insight.

Several factors mitigated the destructive power of that earthquake. It struck offshore deep down about 21 miles underground. It was centered about 70 miles from the nearest city, Concepcion. By contrast, the earthquake that devastated Haiti was much closer to the earths surface and was very close to the capital, Port-au-Prince. But there is another factor that has kept the loss of life in Chile much lower than in Haiti, and that is much stronger buildings.

Eduardo Kausel specializes in earthquake engineering at MIT and he says the philosophy of building codes has been changing.

Professor EDUARDO KAUSEL (Civil and Environmental Engineering, Massachusetts Institute of Technology): The philosophy of earthquake codes until relatively recently was to prevent the loss of life, in other words to prevent the collapse of buildings or houses. That philosophy now is changing. And in addition to protecting people, we are now also trying to protect the buildings themselves. Because if you have a big earthquake you lose many buildings, you lose many bridges, et cetera, as a result of which the economic impact on the country can be phenomenal actually.

BLOCK: And what would be in those codes exactly? What would they say if you want to design an earthquake-proof building, heres what you have to do? What would it say?

BLOCK: We were just hearing about the 15-story building in Concepcion that collapsed. So clearly this is not failsafe, these codes that youre talking about or else that building may have been poorly constructed.

Prof. KAUSEL: That may be so. I saw the video, it was far too poor for me to make an assessment as to why it toppled over. There can be any number of reasons. I mean it may have to do with the foundation, it may have to do with the soil that somehow liquefied or poor construction, poor materials. I mean just by looking very briefly at the video I couldnt really tell.

BLOCK: What did it look like to you, that building?

Prof. KAUSEL: Well, it seemed that it failed at the foundation level because the whole building rotated as a rigid body actually.

Prof. KAUSEL: Well, you would like to make sure that the building will not fail and youre trying to achieve that by making what the engineers call a ductile -ductility. Ductility is - its very easy to explain. I mean, you take a paper clip and you bend it back and forth, and it doesnt break. On the other hand, you take a piece of chalk, which is brittle, and you bend a little bit and it breaks immediately. So, concrete in principle is also brittle material but by adding adequate amounts of steel you can make it ductile.

BLOCK: When you heard about what had happened and you thought about what would be happening in Chile - which is where you're from - what did you imagine? What did you picture?

Prof. KAUSEL: I was concerned about particularly, the older buildings that predated some of the Chilean seismic codes - I mean, some of the historical buildings. And indeed, if you look in Santiago, most of the damage really happened in the historical part of the city and also some churches that go back to the Spanish colonial times. And those have suffered enormously. On the other hand, modern construction and modern buildings behaved very well. The number of buildings in Santiago is very large. I mean, youre talking of thousands and thousands of buildings. And so when you look at that in perspective, you can see that the Chilean seismic codes have done very well.

BLOCK: Mm-hmm. And what about parts of the world also at high risk for intense earthquakes but where codes are very weak? Where would say the worst - where would you say the problem spots are?

Prof. KAUSEL: Well, the problem spots, for example, in Asia. I mean, youre talking there of Pakistan, Iran, et cetera. I mean, along the Himalayas. I mean, they do also have some seismic codes but obviously theyre difficult to enforce. These are poor countries and theres lots of very poor construction actually.

Prof. KAUSEL: Thank you very much for having me here, yeah.

BLOCK: Eduardo Kausel is professor of civil and environmental engineering at MIT.

Police fired tear gas at looters in the central Chilean city of Concepcion as the country's president and the United Nations vowed to speed delivery of food and water in the aftermath of an earthquake and tsunami that have killed more than 700 people.

President Michelle Bachelet described the disaster as "an emergency without parallel in Chile's history." Chilean officials initially balked at international assistance, but Bachelet appealed for help as the scope of the devastation from Saturday's 8.8 magnitude quake became clearer.

In Concepcion, 230 miles south of the capital city of Santiago, rescuers searching for an estimated 60 people trapped inside a collapsed 15-story apartment building, heard victims knocking. They began drilling through thick concrete to reach them, fire Commander Juan Carlos Subercaseux said. By late Monday, firefighters had pulled 25 survivors and nine bodies. At one point, rescuers had to pause because of tear gas fired at looters grabbing everything from canned milk to microwave ovens at a damaged supermarket across the street.

The known death toll rose to 723, with 19 others missing, the National Emergency Office announced. Roads and bridges are devastated and an estimated 500,000 homes are badly damaged.

"We are prepared to provide assistance," U.N. spokesperson Elisabeth Byrs told The Associated Press in Geneva. "It could be quite fast, given that our experts are on standby and were alerted in the region."

The World Health Organization said it expected the death toll to rise in the coming days as communications improve and the extent of casualties becomes clearer.

In Concepcion, the city nearest the epicenter, police used tear gas and imposed a curfew in an effort to control looting. Jaime Toha, the governor of Concepcion province, said 55 people were arrested overnight Sunday for violating curfew.

Survivors in the city reportedly were angered by the slow pace of getting government-issued relief supplies. Bachelet promised imminent deliveries of food, water and shelter for thousands living on the streets. She ordered troops to help deliver food, water and blankets and clear rubble from roads, and she urged power companies to restore service first to hospitals, health clinics and shelters. Field hospitals were planned for hard-hit Concepcion, Talca and Curico.

Bachelet, who leaves office March 11, also signed a decree giving the military control over security in the provinces of Concepcion and Maule and announced a 9 p.m.-6 a.m. curfew for all non-emergency workers.

Reporter Annie Murphy told NPR that she saw numbers of people out in the streets searching for food and water as she traveled into Concepcion. She also said people had mixed feelings about the military presence. "Some find it kind of shocking because they haven't seen the military in the streets since the Pinochet dictatorship," Murphy said. "Other people say that they're glad to see them because of the disorder that was starting to become commonplace."

Efforts to get an assessment of the full extent of damage were complicated by continuing aftershocks that have done more damage and forced thousands of people to set up makeshift tent camps rather than return to their homes. 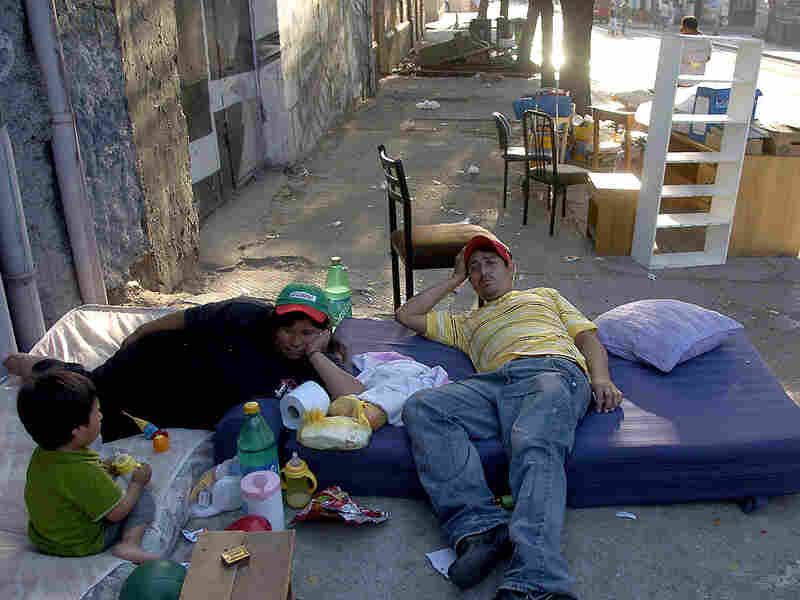 A family rested on mattresses set out on a street in Santiago's Yungay neighborhood on Sunday, a day after the 8.8-magnitude earthquake struck central Chile. Carlos Espinoza/AP hide caption 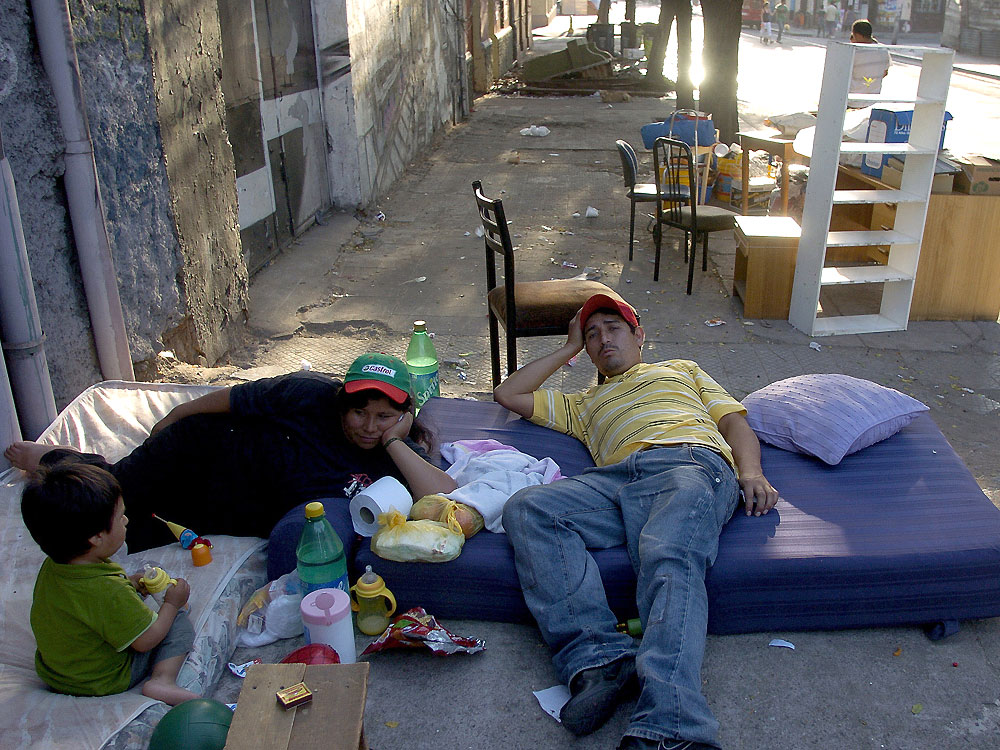 A family rested on mattresses set out on a street in Santiago's Yungay neighborhood on Sunday, a day after the 8.8-magnitude earthquake struck central Chile.

"If you're inside your house, the furniture moves," said Monica Aviles, pulling a shawl around her shoulders as she sat next to a fire across the street from her apartment building. As if to punctuate her fear, an aftershock set off shuddering and groaning sounds for blocks around.

In Santiago, there were only "pockets of devastation" Time magazine reporter Eben Harrell told NPR.

Harrell said the destruction was largely confined to the historic districts, but that more modern buildings — engineered to survive earthquakes — had fared much better.

State television showed scenes of devastation in coastal towns and on Robinson Crusoe Island, where the tsunami reportedly drove almost 2 miles into the town of San Juan Bautista. Officials said at least five people were killed there and more were missing.

Defense Minister Francisco Vidal acknowledged the navy made a mistake by not immediately activating a tsunami warning after the quake hit before dawn Saturday. Port captains in several coastal towns did, saving what Vidal called hundreds of lives. Thirty minutes passed between the quake and a wave that inundated coastal towns.

In the town of Constitucion, 350 people were reported dead after the killer wave struck.

"The tsunami destroyed almost everything on the seafront, [and] the center of the town was completely destroyed," Constitucion Mayor Hugo Tilleria told state television. "This means lots of people still haven't been accounted for."

The U.S. ambassador to Chile said officials were having difficulty getting information from the most devastated region of Concepcion.

In an interview by telephone with CBS on Monday, Ambassador Paul Simons said, "We do not have any confirmed reports of Americans who have died." He added that while officials have been able to contact "a few" of the estimated 1,000 Americans in Chile, "information is still very, very scarce."

He said the Concepcion area has suffered "major devastation" but life was returning to normal in Santiago.

Michael Black, who works for the Christian relief group World Vision, said that damage to infrastructure was making it hard to get aid supplies into the worst-hit areas in and around the capital.

"Roads are heavily damaged, especially the highway that surrounds Santiago," Black said. He added that his organization has a warehouse in Bolivia, but that it would be a challenge getting supplies to communities it needs to reach."

Secretary of State Hillary Clinton planned to briefly visit Santiago on Tuesday as part of a five-nation Latin America trip. Speaking to reporters while traveling in Montevideo, Uruguay, she said she would be bringing communications equipment to Chile.

Clinton said the Chilean government had asked her to proceed with the visit so that she could "assess whatever else they might need and immediately begin the process of providing it."