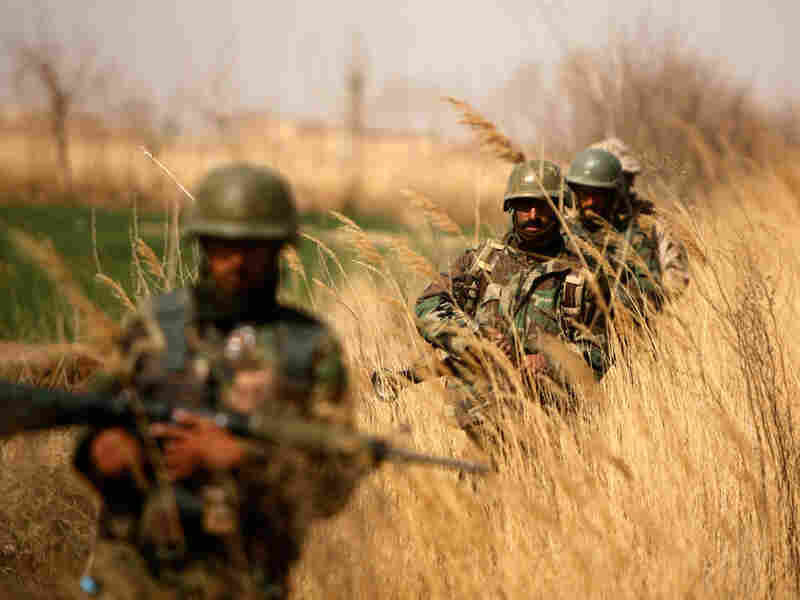 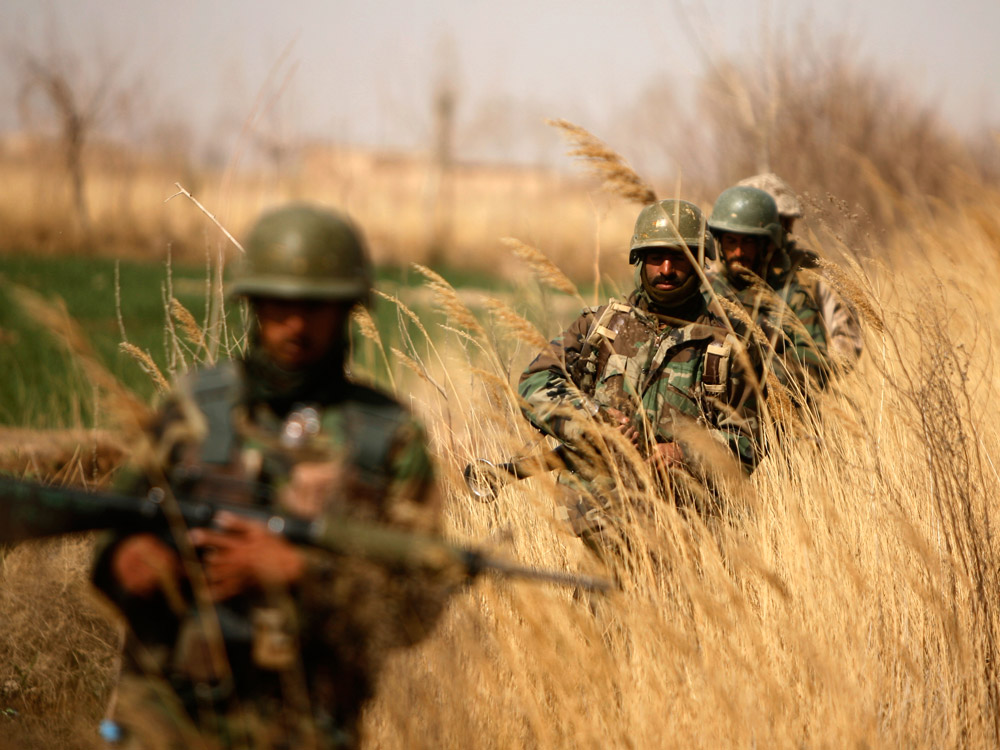 Afghan army soldiers patrol Feb. 23 in Trikh Nawar on the northeastern outskirts of Marjah. Several thousand Afghan soldiers and police are participating alongside U.S. Marines in the operation that began in mid-February.

When the U.S. military began its counterinsurgency offensive in Afghanistan's Helmand River valley last summer, some 4,000 Marines took part in the operation aside about 300 Afghan forces.

By autumn, the number of Afghan troops participating more than doubled, according to Brig. Gen. Larry Nicholson, the Marine commander in southern Afghanistan. Nicholson told NPR that a major challenge in building local relationships was the lack of Afghan soldiers and police.

"We are vetting our police. And my assessment is that probably 3 to 4 out of every 10 we have probably need to really go home," Nicholson says.

But senior U.S. officers say the current operation against the Taliban-stronghold of Marjah in Helmand province is far different.

Several thousand Afghan soldiers and police are participating alongside U.S. Marines in the operation that began in mid-February. Afghan national police were brought in from elsewhere in the country to replace corrupt local cops, U.S. officers say.

Adm. Mike Mullen, chairman of the Joint Chiefs of Staff, points out that there are about 4,500 Afghans with U.S. and coalition troops in Marjah. "It's well planned," Mullen says. "Afghans are in the lead."

You don't forge armies out of nothing. It takes a long time for units to become cohesive and to learn their tasks properly.

But a senior military official tells NPR that the U.S. definition of "in the lead" means Afghans are planning the operation, and sitting down with Afghan elders in mosques or in meetings known as shuras.

The Afghans are not leading in combat, says the senior official.

The combat performance of Afghan soldiers is spotty, according to numerous reports from the field. Reporters on the ground report Afghan soldiers in the rear, sometimes smoking hashish or looting, as U.S. Marines move forward to secure Marjah.

American and British troops provide the artillery, the airpower and the logistics. They are also suffering the bulk of the casualties — at least 10 times that of Afghans.

James Danly, a retired Army officer who trained Iraqi forces, says the problem in Afghanistan is that for years Afghan units were kept on the periphery of U.S.-led operations. They were never real partners, although that is now beginning to change.

"You don't forge armies out of nothing. It takes a long time for units to become cohesive and to learn their tasks properly," says Danly. "It could take a long time."

Just how long that will take is central question of President Obama's Afghanistan strategy. Obama wants to start removing some U.S. troops by the summer of 2011, turning over responsibility to Afghan forces.

But the Afghans may not be ready.

In a secret memo last fall — later leaked to the press — the U.S. ambassador to Afghanistan, Karl Eikenberry, wrote: "We overestimate the ability of the Afghan security forces to take over."

Eikenberry, who served as commander of U.S. and NATO forces in Afghanistan until 2007, expressed doubt in the memo that Afghan forces could assume full security even by the target date of 2013.

Retired Army Lt. Gen. David Barno thinks that may be too pessimistic. Like Eikenberry, Barno once commanded U.S. forces in Afghanistan.

Barno says success in the Marjah operation could turn things around in southern Afghanistan, much like the "surge" of American forces in Iraq in 2007 changed the security calculus there.

Afghanistan "could look a lot different in the next six months or a year from now," Barno says. But that will depend on better governance — as well as security, he says.

"I think the Afghan army is going to provide a key part of that," says Barno says. "In some ways maybe this is the first time that the people actually see their army in action. And I know during my experience there that was an eye-opening experience."

An Effort To Recruit In The South

Just getting the Afghan army into the field has been a struggle. The Afghan government has increased pay in an effort to lure and retain recruits. But illicit drug use and illiteracy are common in the ranks.

Senior U.S. trainers, including Maj. Gen. David Hogg, are having a hard time recruiting, especially among the country's largest ethnic group, the Pashtuns.

"Now we do have an issue as far as getting Afghans from the south, Pashtuns mainly, and so that's one of the things that will be a challenge as far as maintaining an ethnic balance," Hogg says.

Hogg says part of the problem in increasing the army's ranks in the south in that the region is the heartland of the Taliban movement.

But for the Afghan army to be seen as legitimate in the south, more soldiers have to come from there. Most military-age males in the south are already fighting — for the Taliban.

Hogg also says that large numbers of Afghan soldiers are going absent without leave or not reenlisting.

"What that means is we've got retain more and we've got to recruit more to make up for the attrition," Hogg says.

But recruiting is going better outside the south. Hogg says nationwide in December there were nearly 9,000 recruits for the army, double the number from just a few months earlier.

Hogg says his command is hopeful it can meet its target of 134,000 Afghan soldiers by this fall.

But that recruiting success has revealed still another problem: Finding instructors from NATO countries to turn the Afghan recruits into soldiers.

If NATO doesn't send more, the U.S. may have to fill that void, even as the already expanding U.S. troop presence in Afghanistan is expected to reach about 100,000 this fall.