Accessibility links
Support Group Strengthens Mother-Daughter Bond Keeping a sound relationship during the teenage years can be tricky for both parent and child. But with the Mother-Daughter Project, a group of mothers and daughters have banded together to form a support circle with hopes of cementing and nurturing family ties. 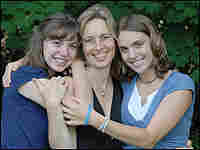 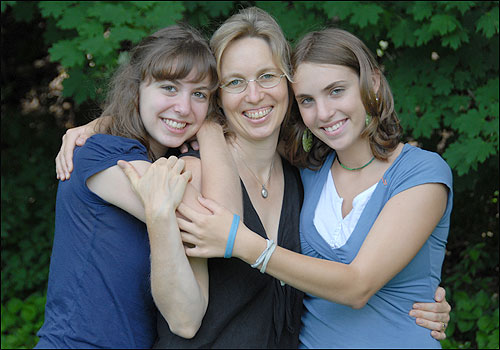 SuEllen Hamkins, with daughters Tiama Hamkins-Indik (left) and Franny Hamkins-Indik, were part of the original Mother-Daughter Project, organizing support for mothers and daughters who want to stay connected.

Psychiatrist SuEllen Hamkins responded some of your questions on how to strengthen relationships between parents and children.

SuEllen Hamkins, a psychiatrist, offers a few tips to help mothers build bonds with their teenage daughters. Hamkins is co-author of the book, The Mother-Daughter Project: How Mothers and Daughters Can Band Together, Beat the Odds, and Thrive Through Adolescence.

—Assume that your daughter loves you and wants to stay connected with you. No matter what unskillful thing she may say or do, from slamming her door to yelling "I hate you!" it helps not to take it personally. Staying available in a low-key way, such as wordlessly taking her a cup of tea, lets her know you care and want to stay connected.

— Create opportunities for mother-daughter fun. Find out what she loves to do and do it with her, whether reading a favorite book series together or catching breakfast. What she loves will change as she grows up, so be prepared to change what you do together.

— Other mothers and daughters are key to connection. For fear of seeming "babyish," your 13-year-old might not want go to the movies with just you, but she'll go with a friend, her friend's mother and you. It's much easier for mothers to forge close relationships with teenage daughters when they band together with a group of mothers and girls who value the same thing. 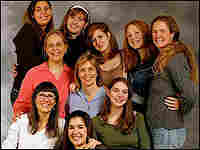 SuEllen Hamkins (center) stands with the Mother-Daughter Project group, which has been meeting for more than 10 years. Janine Norton hide caption 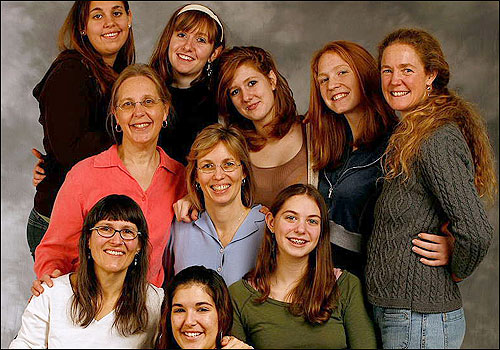 SuEllen Hamkins (center) stands with the Mother-Daughter Project group, which has been meeting for more than 10 years.

Creating a group of mothers and daughters lets girls see their mothers in new ways. Along with the book, The Mother-Daughter Project, this additional information tells how to start a support group that will nurture both mother and daughter through the teenage years.

It was 10 years ago that psychiatrist SuEllen Hamkins and psychologist Renee Schultz began their mother-daughter group. Today, both Hamkins and Schultz say the group helped their daughters grow into confident — yet still connected — teenagers.

The daughters agree. Tiama Hamkins-Indik is Hamkins' 17-year-old daughter. This fall, she'll be a freshman at Olin College of Engineering in Boston. She's an enthusiastic, articulate young woman who says she now has a wonderful relationship with her mother.

But Hamkins says it wasn't always that way. Take five years ago.

"I remember I took her a book about a girl's changing body during puberty," Hamkins says. "I put it up in her room and I went downstairs. Then, I heard this 'thwack.' She had thrown the book downstairs over the banister."

Today, Hamkins can laugh at the situation.

"I hated those one-on-one conversations," Tiama says. "Just hated them. I wouldn't let her talk. I'd plug my ears, run out of the room. For some reason, I just found these conversations awful."

The reason, of course, is obvious. Young girls become very self-conscious as they enter and go through puberty. But in the case of Tiama and the other daughters in the mother-daughter group, interactions with their mothers about puberty and other developmental issues were softened — and better understood — through the meetings of the group.

The group was started when Tiama and the other girls were seven. It was a time that Hamkins and the other women in the original group were beginning to worry about potential estrangement from their daughters as they grew up.

"In our group, we looked at our relationship with our own mothers," Hamkins says. "Most of us had gone through some sort of dramatic rift in adolescence. At the time, we had told our mothers to leave us alone."

But looking back, says Hamkins, the mothers realized that they had actually missed their own mothers and that they just wanted to be better understood.

"We did not want estrangement," she says. "We wanted a more realistic connection. And that's what really galvanized us to begin the mother-daughter group."

When the group began, Hamkins says the goal was to show the girls they could have fun being with their mothers. Over the course of the year, each girl brought a game she loved to the monthly group meeting that she could teach to everyone else. It could be an indoor game or an outdoor game like "capture the flag" or "hide and seek."

But after that first year, the focus of the monthly meetings became more serious. Each meeting anticipated a developmental hurdle the girls would soon face.

For example, at 8, the theme was friendship, because a year or two later, girls could eventually form cliques and drop friendships for no apparent reason. At age 9, the focus was puberty — before the girls actually began puberty and before they became self-conscious. Then, at 12, the topic was about desire and knowing what you want.

"The way we take it on, the whole curriculum of value, is to start with asking the girls and their mothers, 'What would a day you would love be like? What do you like?'" Hamkins says. "The idea is to help the girls develop their own muscle of desire to know what they want and what they don't want."

In one exercise played this year, words were printed out on dozens of small pieces of paper — words that indicated a place, a food, a person or an experience. Then, the girls and their mothers used those words to describe their perfect day. It's a process of confirming the girls' likes and dislikes.

And that can be really important very soon, as the girls enter their teen years and likely get challenged on many of their values.

"I do really remember that year," Tiama says. "I didn't know that desire was the theme of the year. I had no idea. But it all ended up with the sex talk which, of course, was appropriately awkward but we were young enough so we could do it without being awkward about it."

And, as intended, as the group tackled touchy, difficult topics it wasn't only the girls' confidence that grew, it was also their relationships with their mothers.

"When I was younger, I did not view my mother in the context of other people," Tiama says. "But yet in the mother-daughter group, I could see her hanging out, just being with friends, rather than running the household and cleaning up. I got to see my mom as a person; someone I could relate to."

"Every time I see the girls come in and get so engaged in the activities and so interested in what the women are saying, it always surprises me a little bit, even though this was the reason for the Mother-Daughter Project," Hamkins says. "It goes against what we're told that 12- and 13-year-old girls are going to disdain their mothers. It's really great to see how interested the girls are in their own mother and other mothers. It gives me a surge of joy whenever I get to see that happen."

Hamkins says it doesn't take a psychiatrist like herself to start a group like this. All it takes, she says "is at least one other mother and daughter and a commitment to meet over the years."