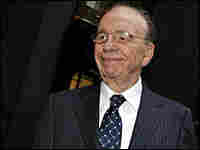 The Bancroft family has finally said yes to Rupert Murdoch's offer to buy Wall Street Journal publisher Dow Jones and Company for more than $5 billion. Some fear the deal has troubling implications for newspapers and for journalism.

Janet Babin of Marketplace talks with Alex Chadwick about the impact that the News Corp buyout could have on publishing in the United States and what this deal means for Murdoch's media empire.