Accessibility links
Oyster Stew: Four Ways To Warm Up Cool Nights In a stew, oysters keep the fresh mineral flavors of a raw bar — but with the plump texture of a cooked bivalve. It's a warming way to have the best of both worlds, in a simple and satisfying oyster stew. Here are four interpretations of a classic, with flavors from Japan, Mexico and New Orleans. 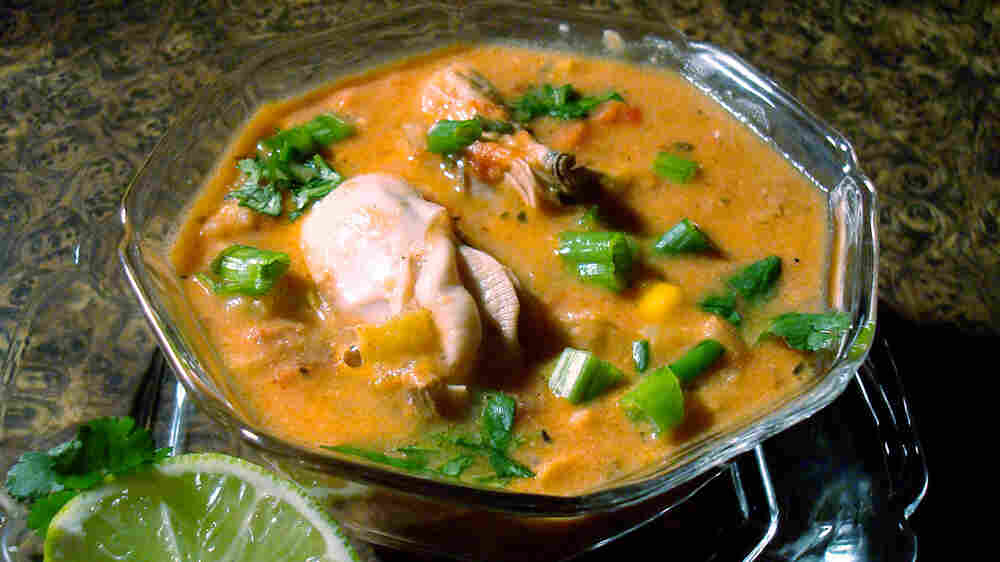 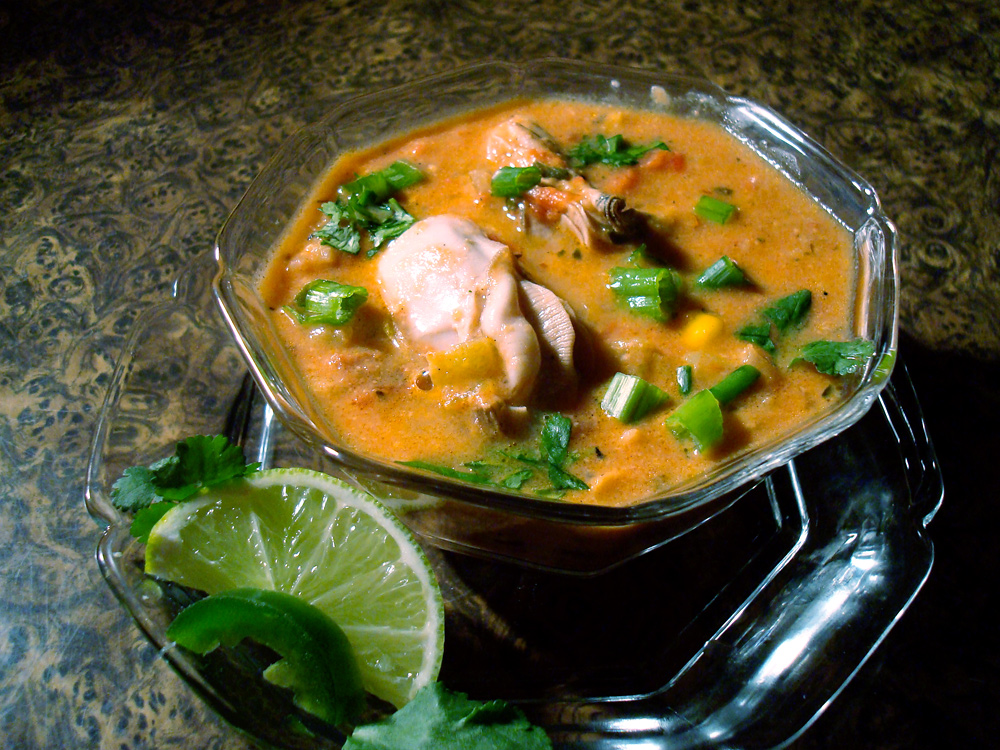 When eating out, I slurp oysters raw, as shooters or on the half-shell with mignonette sauce. I love them dusted with cornmeal or panko breadcrumbs, and fried. At home, though, I prefer to whip up a simple, satisfying oyster stew.

I fell for the stew at the Italian Mamma Zu, our favorite restaurant in my hometown of Richmond, Va. My family and I shared a bowlful, fighting over spoonfuls of plump oysters bathing in spicy, definitively porky, cream. Did we taste pancetta or maybe chorizo? Actually, country ham and smoked hog jowl, I later learned. I had to re-create it.

MFK Fisher's "A Supper to Sleep On" essay in Consider the Oyster became my guide. Although it seems all you do is heat shucked oysters with butter, milk and cream, Fisher reminds us that chefs have long quibbled over how to assemble these constant ingredients. Do you frizzle the oysters in butter until they curl, only then adding them to the hot milk? Boil the oysters in their own juice? Add them raw to the steaming broth?

Then there's the question of seasoning. You want to accentuate but not overpower an oyster's subtle, mineral character. Recommended spices include celery salt, cayenne pepper, paprika, Worcestershire sauce — even nutmeg or old-fashioned blades of mace. And don't discount the power of salt and pepper.

Regardless of method, these stews are deemed by Fisher to be "mildly potent, quietly sustaining, warm as love and welcome in winter." Yes, winter. So gather ye oysters while ye may, through April. Tradition tells us to shun the mollusks in R-less summer months. The idea was to let oysters spawn in peace, when the water temperature warms to 70 degrees.

Sure, it's possible — and more importantly, safe — to eat oysters year-round from commercial farms, particularly colder-water Pacific varieties. But I won't crave oyster stew come July. As with tomatoes and strawberries, it's better to indulge in peak season, then abstain and await that first bite of delayed gratification.

Laura McCandlish is an Oregon-based freelance writer. She contributes to The Oregonian's FOODday section and hosts a monthly food show on Portland radio station KBOO. She blogs at baltimoregon.com.

I was eager to cook other stews before this season passed. I wanted to try ethnic variations. I also had different oysters to work with. Back East, I ate mostly larger, mild specimens from tributaries of the Chesapeake Bay. Now I live in Oregon, known for its own Yaquina Bay and Coos Bay bivalves.

Unfortunately, reports of illness just prompted Oregon Oyster Farms, one of our biggest suppliers, to recall its shucked and still-in-the-shell products. My seafood shop, however, carries only Willapa Bays from Washington.

I first tackled a Japanese stew, based on a popular appetizer of sweet oysters broiled in foil with enoki mushrooms at Greenwich Village's Tomoe Sushi. A friend who works there couldn't divulge the recipe, but confirmed the broth is a blend of dashi, rice wine, soy sauce and butter. Dashi, a seaweed consomme as integral to Japanese cuisine as our chicken stock, is surprisingly easy to make.

For Valentine's Day, I made my husband a stew of oysters and artichokes, both purportedly aphrodisiacs. We enjoyed my version's spring green puree, but it didn't quite meld with the oyster flavor.

I tried one more preparation, a Mexican-style stew that was our clear favorite. While I skipped questionable-looking oysters in the beach town of Puerto Escondido, I grew up loving ostiones de Mazatlan, the tangy Mexican oyster dish my father bakes every Christmas. He learned to make the cheddar cheese-topped casserole while working at Harvard Square's late Casa Mexico restaurant during college.

Over the phone, Dad and I invented a soup version of the recipe. The green chilies, the dried ancho pepper, the crumbled tortillas to thicken the broth were his suggestions. He thought of spiking the chowder with sake. I decided to keep it Mexican, considering beer before settling on tequila.

Whatever recipe you use, it's worth splurging on extra-small oysters. The big ones can be chopped into bite-size morsels, less appetizing than the intact frilly petites. When swallowing oysters raw, still my favorite mode of consumption, I like them meatier, but only if they're ultrafresh.

Why not have your oyster and eat it, too? Chase a bowl of steaming stew with one perfect, fresh oyster on the half-shell. I recently tried this divine combination from the century-old Dan & Louis Oyster Bar in Portland. A milky stew dotted with pearls of butter and a raw oyster, briny and cold. That's my idea of a supper to sleep on. 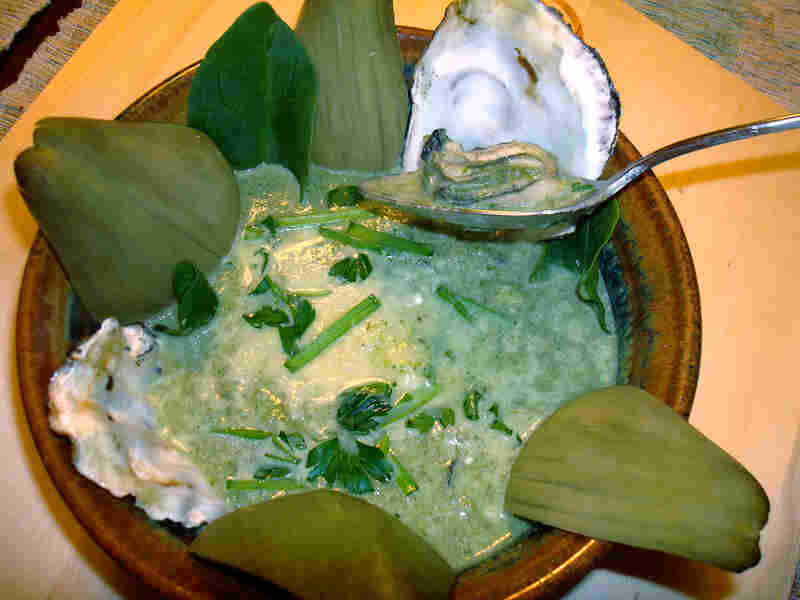 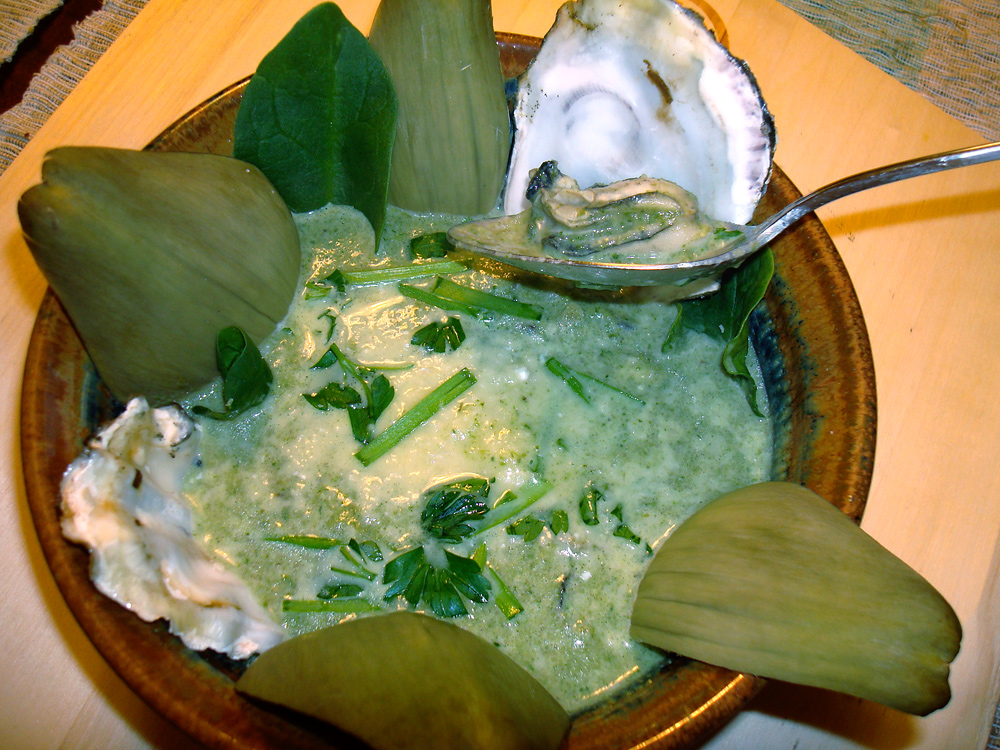 A New Orleans staple, oyster and artichoke soup first caught my eye in James McNair's now out-of-print Soups (Chronicle Books 1990). I combined that recipe with elements of an excellent oyster and spinach bisque from the now-defunct Wesley's Restaurant in Virginia Beach, Va.

For a Cajun kick, ratchet it up with some hot sauce. Next time, I might also spike the stew with Pernod, or other anise liqueur, which pairs well with oysters.

Makes 4 servings as a soup course, or at least 2 as a main dish

1 cup chopped shallots, leeks and/or yellow onion (I use half leeks, half onion)

Cut off tip of artichoke stems and snip off the thorny tops of the leaves. Peel the stem to remove tough bottom leaves. Place in a steamer basket over 1 to 2 inches of boiling water, and steam about 30 to 45 minutes, until the stem and hearts feel tender when pierced. Pull off the leaves, spooning off their meat into a bowl. Scrape out and discard the leaves and fuzzy choke. Chop the crowns and peeled stems, adding them to the bowl. Set aside.

In a soup pot or large, heavy saucepan, melt 4 tablespoons butter over medium heat. Add the shallot, leek or onion, and celery, and saute until soft and fragrant, about 5 minutes. Add the celery salt or seed, artichoke pulp and chopped spinach, sauteing 1 minute longer.

Stir in the stock and bring to a boil over medium-high heat, then reduce heat and simmer for 15 minutes. Remove from heat and cool slightly. Transfer soup to a food processor or blender (I use an immersion blender in the pot) and puree until smooth. Pour the mixture into a clean pot and bring to a simmer over low heat.

In a small saucepan, melt the remaining 2 tablespoons of butter over medium heat. Add the flour and cook, stirring constantly, until the roux is smooth and lightly golden. Stir the mixture into the simmering soup and blend well. Stir in the cream and season to taste with cayenne, salt, pepper and a splash of sherry. Add the drained oysters and simmer until they are cooked, about 4 minutes.

Note: Before adding the oysters, the soup can be refrigerated for up to 3 days. To serve, slowly reheat, add the oysters, cook and serve. 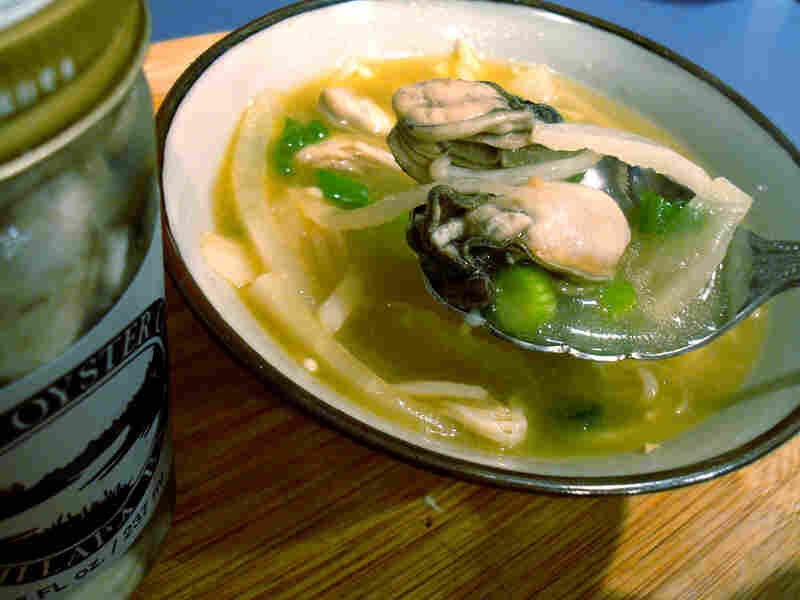 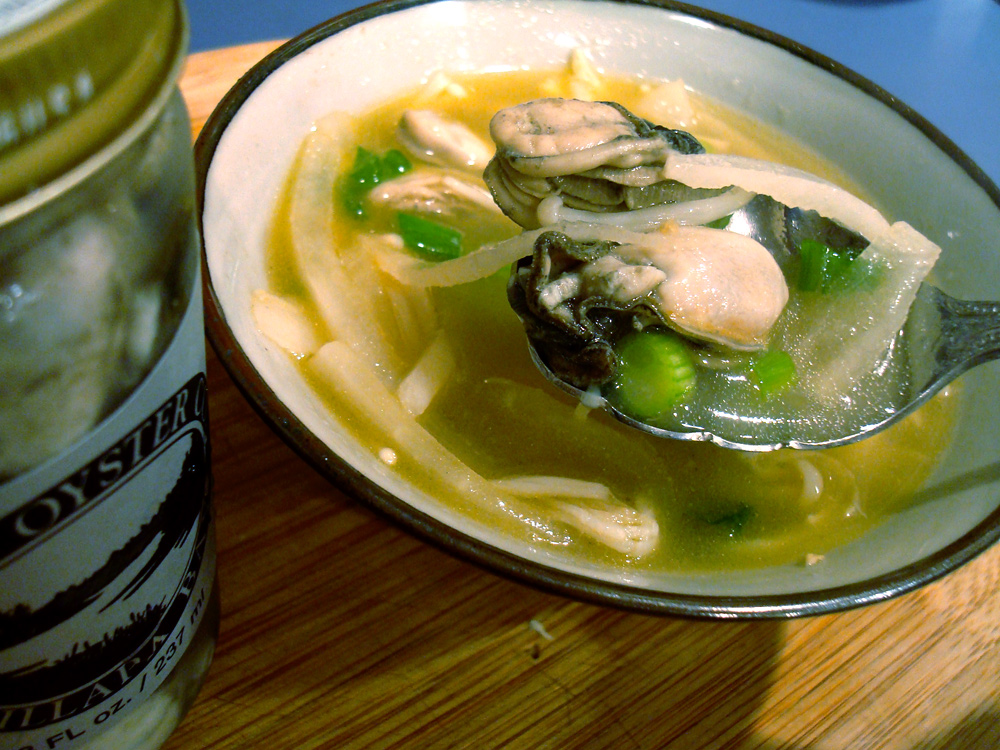 For a shortcut (if you don't mind MSG), use instant dashi powder. You can also substitute diluted tsuyu concentrate (used in tempura and soba noodle dipping sauces) for the dashi, mirin and soy sauce.

But it's incredibly easy to make your own dashi. Find most of the following ingredients, including daikon and enoki mushrooms, at any Asian market or, increasingly, your local grocery store. The Book of Miso (Ten Speed Press 2001) is a helpful primer on making dashi, a building block of Japanese cuisine.

Makes 4 servings as a soup course, or 2 as a main dish

Half a 3.5-ounce package enoki mushrooms, rinsed, with bottom inch cut off, and separated

Combine water and kombu, letting it soak for at least 6 hours and preferably overnight. Remove kombu, add ginger to remaining liquid, and bring to a boil. Skim any scum from surface.

Add the bonito flakes to the broth and bring it back to a boil. Turn off heat and let stand for about 3 minutes, or until flakes settle. Push remaining flakes to bottom and skim off foam. Strain broth through cheesecloth-lined strainer over a pot. Press flakes with back of spoon to extract any remaining broth and discard.

In a large saucepan or soup pot, stir together dashi, miso, soy sauce and mirin. Add daikon slivers and bring to a boil. Reduce heat to a simmer and add enoki mushrooms.

Melt butter in a separate fry pan and saute strained oysters until they curl. Add about 2 tablespoons oyster liquor to pan and stir into simmering broth. Salt (or add extra soy sauce or mirin) to taste.

Ladle into bowls and garnish with chopped scallions before serving.

*Forgot to bathe your kombu overnight? Just bring it to a boil in the water, turn down heat and simmer for 3 to 5 minutes, then turn off heat and remove softened seaweed, skimming scum from the surface. The traditional cold-soak method, however, is said to draw more nutrients and flavor out of the seaweed. 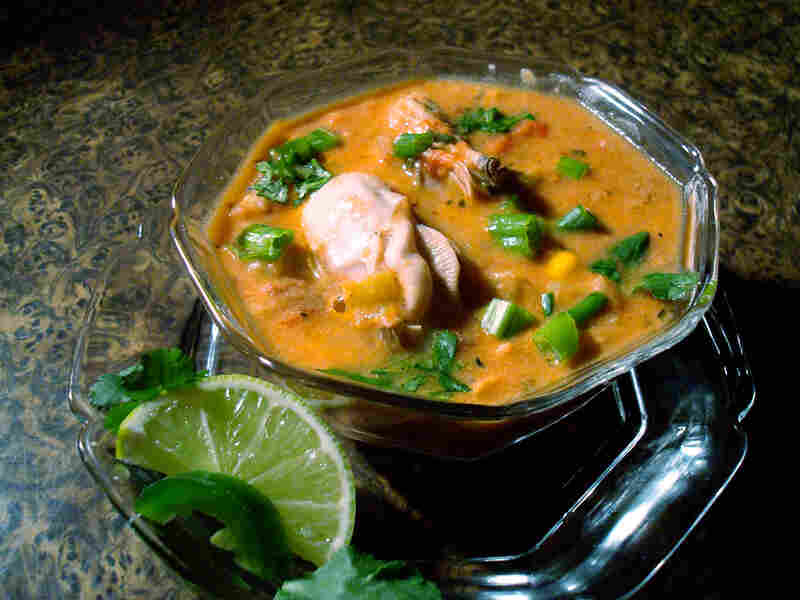 This piquant tortilla soup is inspired by my dad's recipe, where raw oysters are covered in butter-soaked breadcrumbs and salsa, then baked with cheese. The oysters stand up to the mild chilies and mellow ancho pepper, softened by the cheddar cheese and cream. The splash of tequila and squeeze of lime provide just the right zing.

Makes 4 servings as a soup course, or 2 as a main dish

14.5-ounce can fire-roasted diced tomatoes with their juice (I use Muir Glen with green chilies)

2 cups of stock (I use a chicken-beef broth combination)

Place dried ancho chili in a hot skillet and toast until blistered and aromatic, about 1 minute per side. Grind the toasted pepper, including the seeds, in a spice grinder or food processor, or crush vigorously with a mortar and pestle.

Melt 2 tablespoons butter in a soup pot or large, heavy saucepan. Add the onion and garlic, and saute until lightly browned and fragrant, about 3 minutes. Add tomatoes, green chilies, stock, crushed ancho chili and oregano. Bring to a boil over medium-high heat.

Reduce to a simmer, add tequila and crumble in corn tortillas. Continue to simmer about 20 minutes, stirring, until tortillas are incorporated into the soup. Add corn kernels.

Melt remaining tablespoon butter in a separate fry pan. Add white parts of scallions and strained oysters, sauteing until they curl. At the same time, stir shredded cheese and heavy cream into soup. Add reserved liquor (optional) for extra oyster flavor. Stir in the oysters and pan juices. Spritz with half the lime. Cut the two remaining lime quarters into 4 wedges.

Salt and pepper to taste.

Ladle into bowls to serve, divvying up the oysters evenly. Garnish with chopped green scallion parts, cilantro and lime. 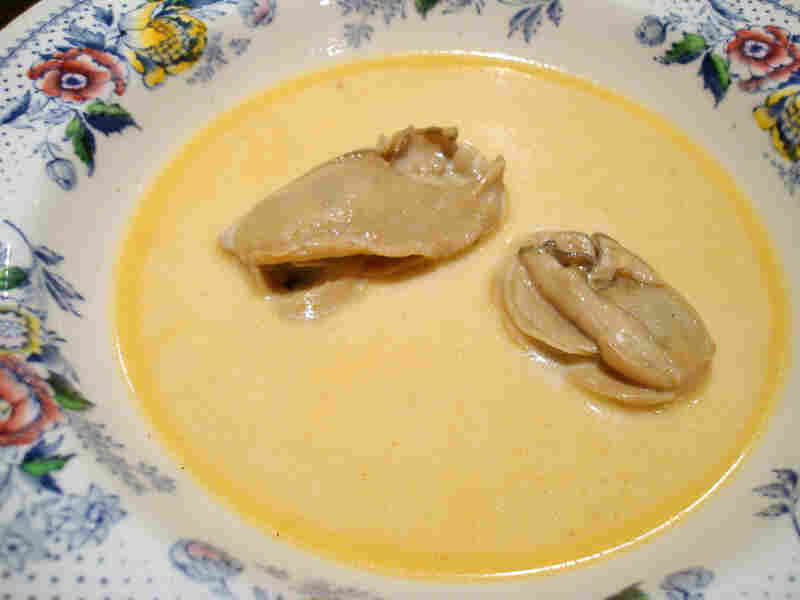 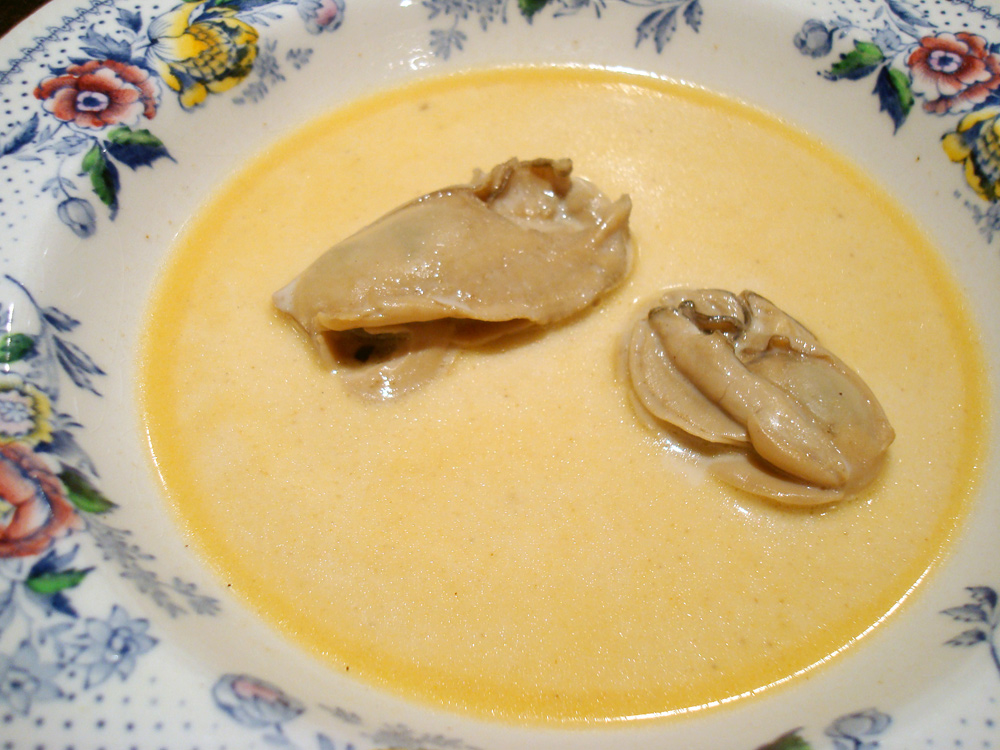 I prefer to saute oysters in butter first, until they curl. Some recipes say to scald the milk in a double-broiler so it doesn't scorch. I don't bother, just warming the milk cautiously instead, in a thick-bottomed pan.

For a heavier soup, use less milk and more cream. Consider garnishing the soup with chopped parsley or chives. This is my imperfect ode to the stew I had at Mamma Zu.

Makes 8 servings as a soup course, or 4 as a main dish

In a large saucepan, bring the reserved oyster liquor to a boil and skim off the foam. Add cream, milk, butter and celery salt to taste, and gently simmer.

At the same time, fry pancetta until grease coats the saute pan. Add the crushed pepper and drained oysters, sizzling them until just curled, being careful not to overcook. Add the oysters to hot broth, removing the pancetta. Salt and pepper to taste.

Ladle the soup and at least two oysters into each bowl. Serve immediately, with oyster crackers or crusty bread.