Accessibility links
Inchvesting In Detroit: A Virtual Realty For $1, anyone can own a square-inch corner of this Rust Belt town. Real estate developer Jerry Paffendorf has "inchvestors" from as far away as Australia. It operates like a SimCity computer game, except buyers get real land. Some locals hate the idea.

For $1, you can own a piece of Detroit. It will be a small piece: 1 square inch, to be exact. But your deed to that microplot of land will also buy you passage into an online community that could yield big ideas for the city. 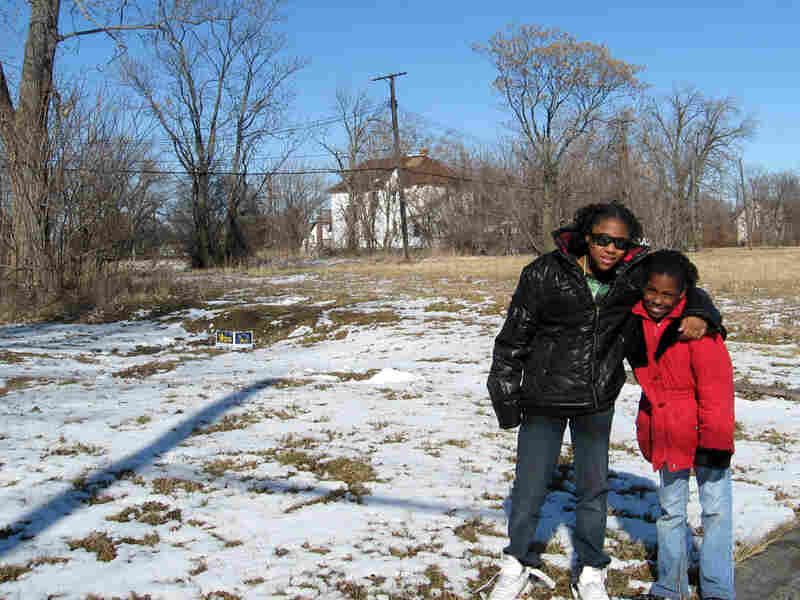 Celeste Moore (left), 11, and her sister Ricki Collins, 9, live in the only house left on the block where Loveland, a SimCity-like, part virtual, part physical project, is located. Ricki says she hopes the project will give them a neighbor. Sarah Hulett/Michigan Radio hide caption 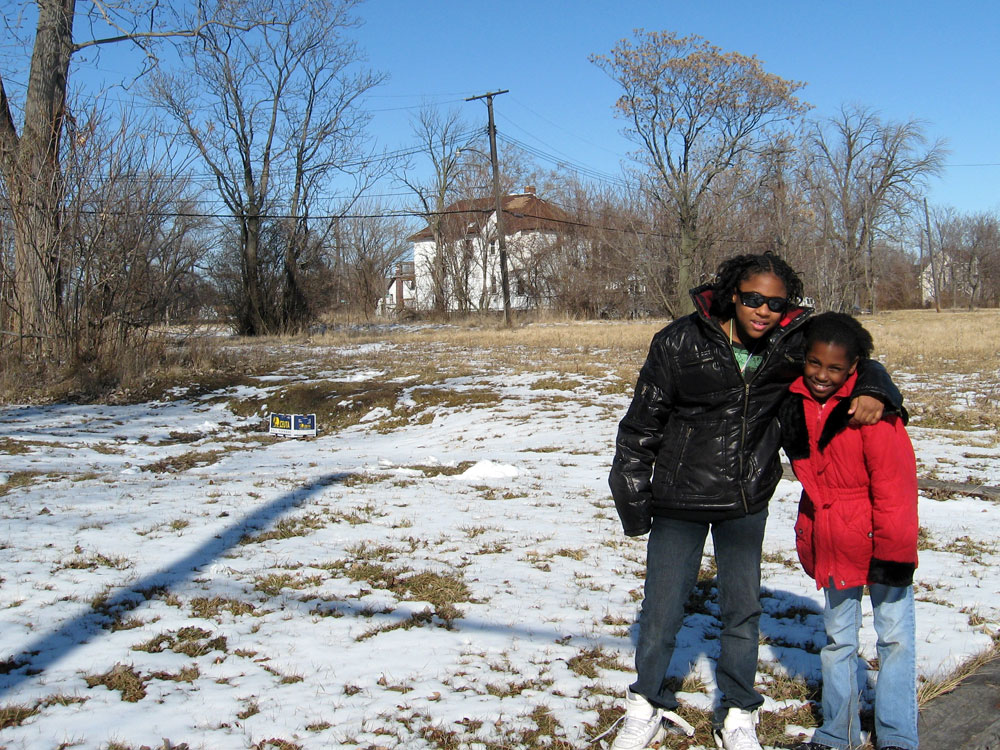 Celeste Moore (left), 11, and her sister Ricki Collins, 9, live in the only house left on the block where Loveland, a SimCity-like, part virtual, part physical project, is located. Ricki says she hopes the project will give them a neighbor.

Paffendorf's project is called Loveland. And it's a hybrid: part virtual and part physical.

"What we want to do is we want to build this wild social network of people that's literally built out of the dirt and the ground," Paffendorf says.

The physical part is a vacant lot on Vernor Highway in east Detroit. Paffendorf bought the property at auction for $500. Then he put 10,000 square inches up for sale, and people from all over the planet began snapping them up. They've now all been sold to nearly 600 people.

The "deeds" Paffendorf mails out are not legally valid, so the people who buy inches won't get to vote in Detroit, or have to pay taxes.

Some inchvestors have sentimental ties to the city, and they just liked the idea of having a physical stake in the place where they — or their parents or grandparents — grew up. But a lot of them are attracted by the project's virtual possibilities and say Loveland is sort of like the SimCity computer game, but with real land.

Rita King is the biggest "landholder" in Loveland, with 1,000 square inches. She works for IBM, and she's an entrepreneur with a firm that helps companies use social media and virtual worlds.

King is excited about the project's potential to help the real city in which Loveland sits.

"Because Loveland is physically located in Detroit, it takes those 500 inchvestors, and it ties us to Detroit, which means that the development of Detroit is now of critical importance to hundreds of people who don't live or work in Detroit," King says. "And now I, for one, am starting to look very closely at Detroit, and how can I help Detroit level up along with Loveland in our small way."

"Leveling up" is a phrase from the world of video games. It's what happens when the character you're playing makes it to the next level in the game. And for many, it's an apt description of what Detroit needs to do.

King says she expects the online component of Loveland to include interactive maps and stories. And proceeds from the project's next phase are expected to be used to fund grants for nonprofit groups around Detroit.

It ties us to Detroit, which means that the development of Detroit is now of critical importance to hundreds of people who don't live or work in Detroit.

Feedback From Locals Not Always Positive

But for all the excitement about the possibilities Loveland holds among high-minded techno-futurists, the project is also fodder for derision and mockery in some quarters. Here's a sampling of some of the comments posted to an online discussion board called Detroit YES:

A virtual art project? That sounds to me like a project that's almost an art project.

This guy's laughing all the way to the bank.

Bill Johnson, who goes by the pseudonym "Gnome" on Detroit YES, thinks the project is just exploitation.

"You know in places outside Detroit, we've got a bad reputation as sort of a pitiful, worthless place," Johnson says. "And this guy's preying on that. That's what he's really peddling."

Paffendorf says Detroit is a place of opportunity and creativity. He shares an optimism about the city and his project with Ricki Collins. She's 9 years old and lives next door to the empty lot Paffendorf bought. Hers is the only house left on the block.

It's not clear how many of the people who have bought into the project will actually visit their square-inch plots in person. But King says she intends to make the trek from New York City.

She also plans to install a mailbox so people can send things to and from the site.