Accessibility links
Tsunami May Prove Bigger Killer Than Chile Quake Authorities say most of the nearly 800 people who died were in communities along a 435-mile stretch of Chile's Pacific coast that was swamped by giant waves after last week's 8.8 magnitude earthquake.

As Chile's death toll neared 800 on Wednesday, it was becoming clearer that a tsunami that smashed coastal communities after last week's massive earthquake may have been the biggest killer and done the bulk of the economic damage. 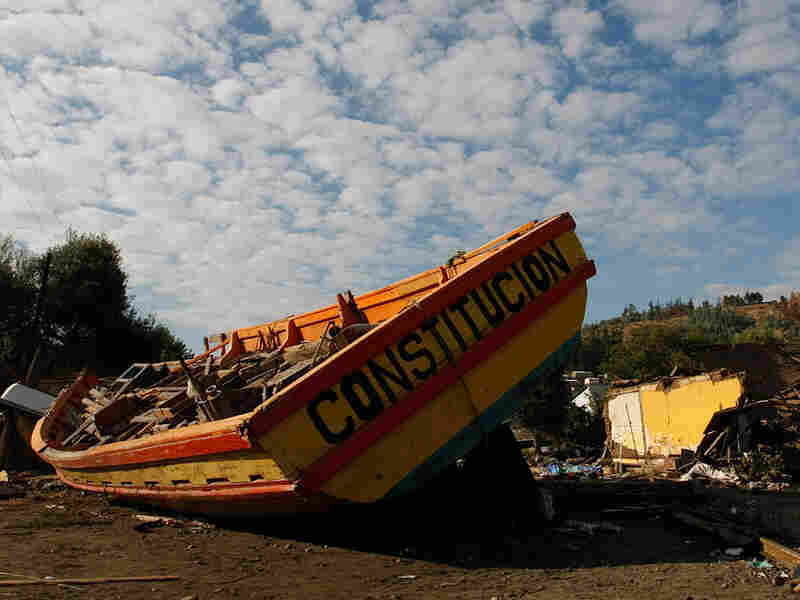 A boat battered by giant quake-triggered waves was driven ashore near the port in Constitucion, Chile. Fernando Vergara/AP hide caption 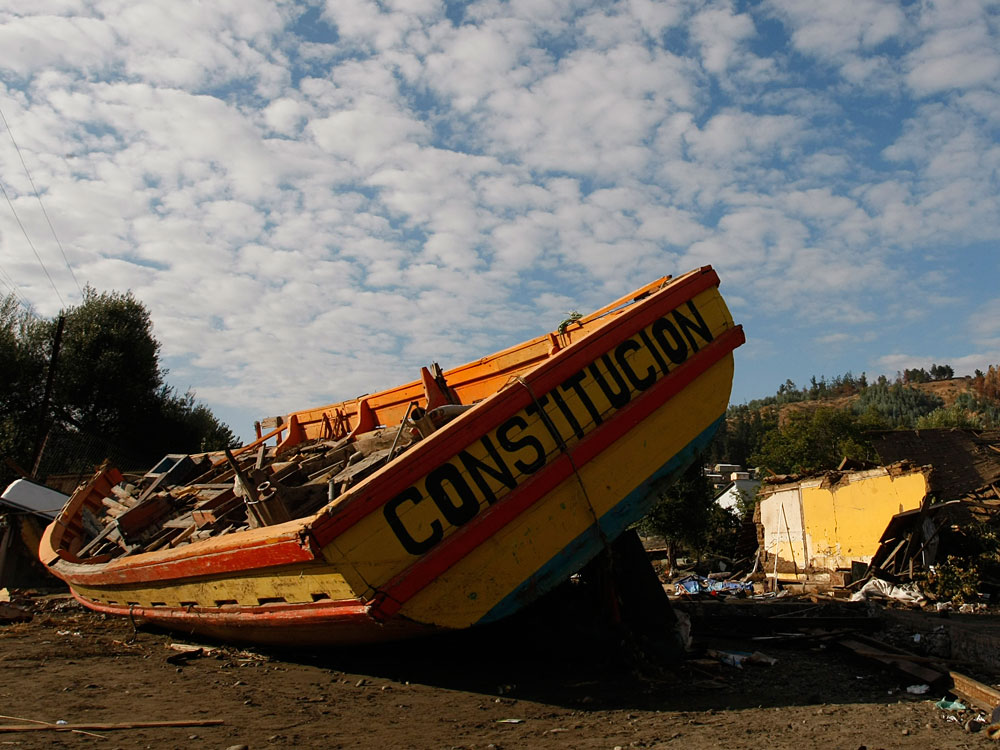 A boat battered by giant quake-triggered waves was driven ashore near the port in Constitucion, Chile.

A 5.9 magnitude temblor provoked a brief panic in the city of Concepcion on Wednesday, but no tsunami warning was issued and no injuries or damage have been reported. Some residents started running for high ground when they felt the earth shifting again.

Authorities now say most of the 799 people known to have lost their lives were in coastal communities, and that the surging seawater may have been more deadly than the quake itself.

When the small fishing village of Dichato was hit by the waves, it killed 15 people and destroyed 80 percent of the town.

One resident, Raul Andrade, had a two-story house right on the beach and did good business selling snacks and drinks to the tourists who flock to the town during the Southern Hemisphere's summer. But the former fisherman told NPR that he remembered the tsunami that hit after the last big earthquake in 1960. So when the water receded from the beach, he knew it would return quickly — and with a fury. He escaped with his life, but lost all his possessions.

NPR's Juan Forero Reports On The Devastation Along Chile's Coast

In school teacher Maria Teresa Mios' cottage, the refrigerator is wedged up over a wall, and the furniture is soaked in mud and sand, a total loss. The worst part, she said, was having to run for her life, all the while watching her belongings float by.

In Chile's big cities, a stringent adherence to building codes has limited the damage, but the codes weren't well enforced in small towns such as Dichato.

As Chilean air force helicopters ferry in food and water, local residents are forced to stand in line for a handout.

Marcelina Sisterna picked up a box of pasta, water and canned goods. She said she welcomes the relief supplies but that the town needs much more. People were so hungry, she said, that some resorted to stealing food after the waves hit.

That story is echoed in countless other small towns that dot the coast, where the loss of life has been high and the lasting economic impact significant.

Farther south, in the port city of Talahuano, $40 million in business from the annual anchovy and sardine catch was washed out to sea with the receding tsunami. The large ships that fish Chile's rich offshore waters were able to ride out the waves, but a spokesman for local fishermen said an estimated 1,000 boats that ply waters closer to shore were destroyed.

Less than 100 miles away, the quake felled bridges and tore huge crevices in the main north-south highway, which normally serves as the main artery of the country's farm-raised salmon industry. And continued telecommunications problems meant that local and foreign investors who own vineyards couldn't reach employees to talk about the upcoming grape harvest.

Meanwhile, Chilean soldiers deployed to larger cities continued a crackdown on looting and worked to speed the delivery of food and water. The post-quake banditry put President Michelle Bachelet on the defensive. She declared a state of emergency Sunday and dispatched 14,000 troops to the quake zone with shoot-to-kill orders. The country's urban rescue teams were stymied by delays in getting equipment and the looting of their depot in Concepcion.

Chilean officials initially declined offers of international help, miscalculating the scope of the devastation. The government later welcomed assistance from the U.S. and other nations.

Bachelet, who leaves office March 11, said her country is still in the midst of an emergency response and that the extent of the destruction is still unclear. One estimate, she said, is that it will cost $30 billion to rebuild.

With 2 million people affected and 500,000 homes damaged, "I can only say it will be a lot," Bachelet said.

From NPR's Scott Neuman, Jason Beaubien and Juan Forero, with material from The Associated Press

How The Chilean Quake Moved An Entire Planet March 3, 2010