Accessibility links
Matzo Run Marks The Beginning Of Passover The Manischewitz factory in New Jersey prepares 60 percent of its matzo product line in the weeks before Passover. Schmura, or "guarded," matzo is produced under the watchful eyes of a team of rabbis. 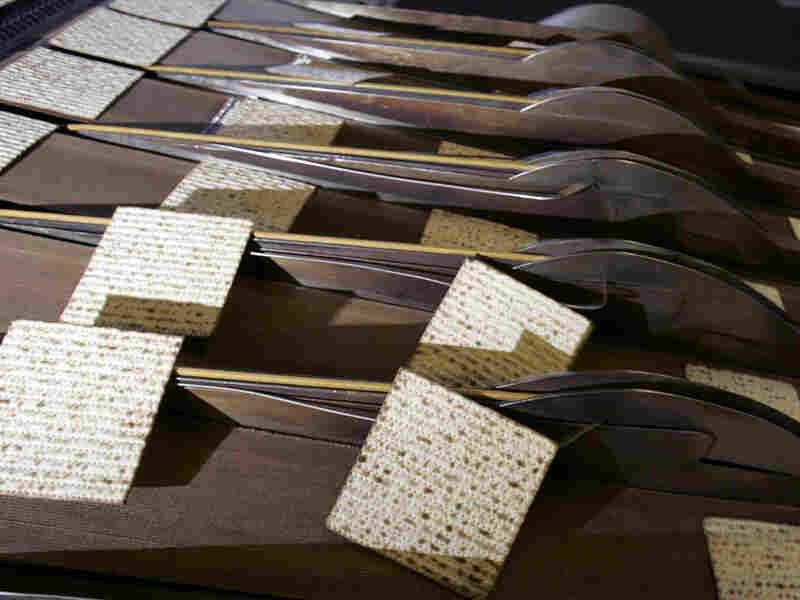 Matzot emerge from the oven on a conveyor belt at the Manischewitz plant, formerly in Jersey City, N.J., in this file photo. Mike Derer/AP hide caption 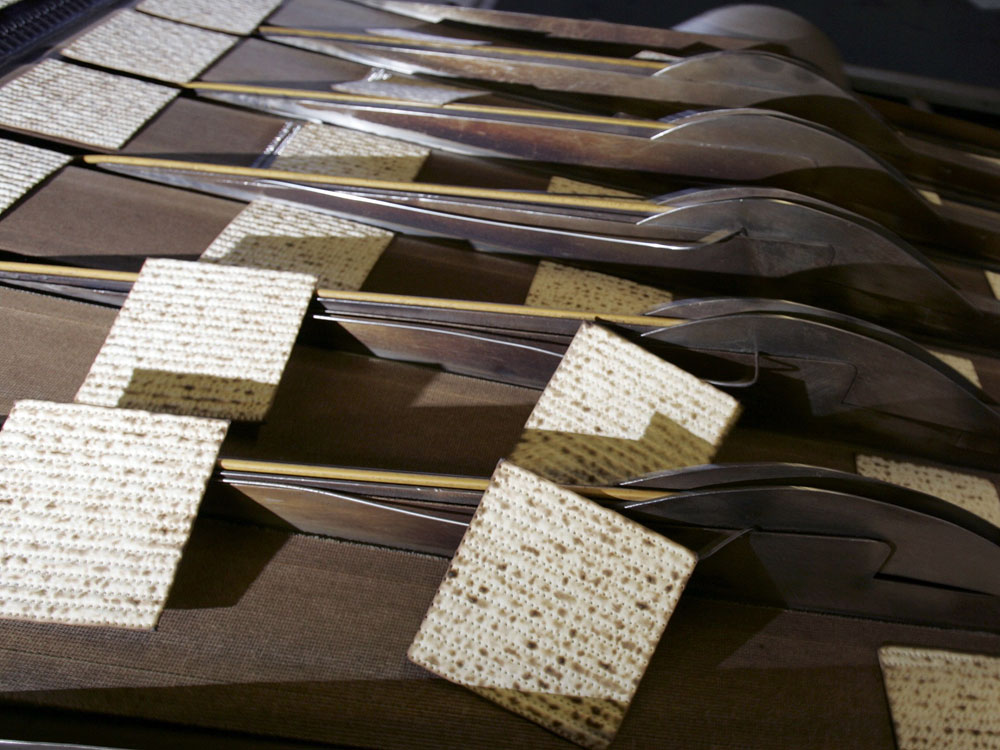 Matzot emerge from the oven on a conveyor belt at the Manischewitz plant, formerly in Jersey City, N.J., in this file photo.

Passover is right around the corner, and over the next few weeks, hundreds of thousands of pounds of matzot (plural of matzo) will ship out to grocery stores everywhere. A few batches of this plain-tasting cracker will sell out first, though.

The pressure is on at the Manischewitz baking factory in Newark, N.J. Rabbi Yaakov Horowitz is overseeing the production of schmura, or "watched," matzo.

A Special Kind Of Matzo

All matzo is bread made without yeast, but schmura matzo is guarded by the watchful eyes of a team of rabbis from the field to the oven. Their job: guard against any trace of water mixing with the flour until the last minutes before baking.

"The very basic of kosher matzo requires that it goes from the mixing area to the oven in less than 18 minutes," Horowitz says.

Jewish religious leaders say 18 minutes of contact between flour and water is about as long as you can go before fermentation sets in. Even before it is mixed, the matzo dough comes from grain that, once it is ripe, is kept away from water.

At the industrial bakery, a few religious leaders are on hand to assist with the schmura matzo production. Taking a cue from Horowitz, two rabbis give a blessing, press a button next to a silver mixing cauldron, and watch.

The very basic of kosher matzo requires that it goes from the mixing area to the oven in less than 18 minutes.

Rabbi Yaakov Horowitz, who oversees the production of schmura matzo at the Manischewitz baking factory

"I remember going to the Boston rebbe and making schmura matzot in the basement," Katz says. "A group of young people — we were rolling it, and then the rabbi himself putting it into the oven. And that matzo had [a] special taste."

Katz and the others are watching the high-tech machines press out a ribbon of dough. Suddenly, an official matzo-watcher opens a gate on the conveyor belt and just-cut squares of dough fall into a trap right before they go in the oven. The rabbis say these matzot are not up to snuff.

"They are torn," Horowitz says. "They are broken, they are folded over."

Soon, the familiar squares are rolling again. Manischewitz and other matzo makers turn out as much as 60 percent of their product line in the weeks before Passover — a high-stress order.

"For me, it's PPS — pre-Passover syndrome," says Kevin O'Brien, the head of sales for Manischewitz. "In layman's terms, it's like our Thanksgiving, Christmas, New Year's and Hanukkah all rolled into one."

In the coming weeks, schmura matzo from Manischewitz is heading to Seder tables from Canada to Argentina. As for the matzo dough that didn't pass muster, it's turned into feed for animals.