Accessibility links
Delayed U.S. Nuclear Review Likely To Call For Cuts The Obama administration has missed its own deadline for mapping out its policy on nuclear weapons. But however the Nuclear Posture Review emerges, it will likely call for a deep reduction in the U.S. arsenal. 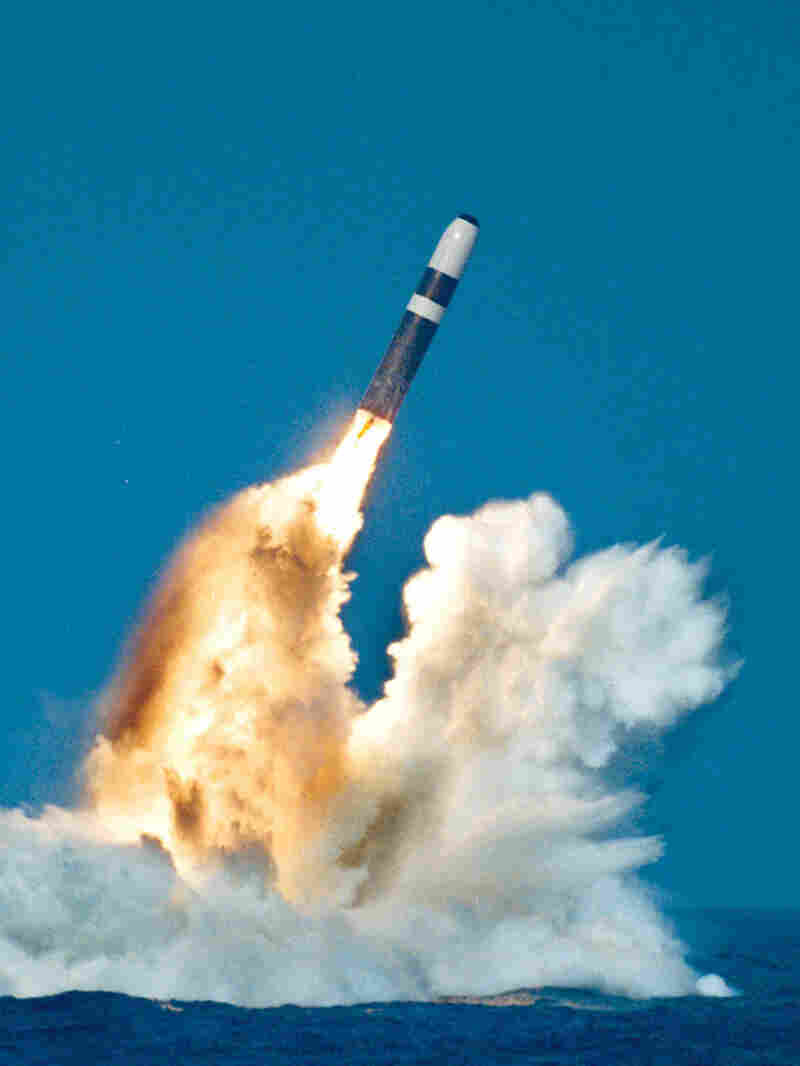 A Trident missile is launched in a test firing from a U.S. Navy submarine in this undated file photo. The U.S. has about 2,200 nuclear weapons deployed on long-range missiles, bombers and in submarines. Getty Images hide caption

The Obama administration has missed its own deadline for mapping out its policy on nuclear weapons, which was supposed to be submitted to Congress two days ago.

Each new administration goes through the Nuclear Posture Review, which is intended to determine what nuclear weapons are for, how many of them the U.S. should maintain, and a host of highly complex related issues.

From the first weeks of his administration, President Obama signaled he wanted to see deep cuts in the U.S. nuclear weapons arsenal of about 2,200 deployed warheads. But he also recognized the need to maintain the arsenal as long as other nations possess nuclear weapons.

"President Obama has helped focus our attention on the challenges of reducing nuclear dangers and taking concrete steps toward the ultimate goal of eliminating nuclear weapons," Gates said. "At the same time, as he and the vice president have said, as long as nuclear weapons are required to deter aggression and defend our country and our allies, we will maintain a safe, secure and effective nuclear arsenal."

It is the task of the Nuclear Posture Review to set out how the administration will implement that policy. The review is expected to be completed sometime this month.

One of the first and most contentious issues the administration is trying to sort is what the nuclear weapons are for.

It's not going to be as much as some people wanted. It's going to be criticized by others as having gone too far.

Some administration officials want a simple and straightforward answer: Nuclear weapons are solely for the purpose of deterring a nuclear attack against the U.S. and its allies.

But others prefer a more ambiguous answer, says Barry Blechman, a national security expert and co-founder of the Stimson Center, a think tank in Washington, D.C.

"The Defense Department prefers to have some greater flexibility there because military planners say you never know what might happen," Blechman said.

Some say the U.S. could use nuclear weapons to retaliate against a biological or chemical attack, or against an enemy's deeply buried nuclear weapons facilities. Still, even those who argue this position want the Nuclear Posture Review to declare nuclear weapons are primarily, but not exclusively, a deterrent.

Either position would depart significantly from past nuclear doctrine, says Jim Walsh of the Massachusetts Institute of Technology's Security Studies Program.

The U.S. and Russia are negotiating further cuts in deployed nuclear weapons to about 1,600. The U.S. also has several thousand active nuclear warheads stored in reserve. The Nuclear Posture Review will probably call for deep reductions in them, Walsh said.

"What you're going to see from this posture review is, there'll be change," he said. "It's not going to be as much as some people wanted. It's going to be criticized by others as having gone too far.

"But it definitely points the U.S. in a new direction, that is de-emphasizing nuclear weapons in a way that we haven't seen before," he said.

Vice President Biden referred to this difficult balancing act in a speech he gave at the National Defense University last month.

"Some in my own party may have trouble reconciling investment of $7 billion in our nuclear complex with the commitment to arms reductions," Biden said. "Some in the other party may worry we are relinquishing capabilities that have kept our country safe. With both these groups, we respectfully disagree."

But Blechman points out that however the Obama Nuclear Posture Review emerges, it will call for a reduced role for nuclear weapons in the defense of the United States.

This in turn, say senior administration officials, will help the U.S. work with other nations to prevent the spread of nuclear weapons, especially in such problem cases as Iran and North Korea.

"We're trying to communicate to the world that we're going to meet our obligations, that we're going to reduce our reliance on nuclear weapons," Walsh said. "And that that's going to give us political leverage when we have to go to some of these countries and get their help to deal with the problem states that we confront right now."