Accessibility links
For Gay Catholics, D.C. Marriage Win Bittersweet Gay couples lined up to apply for marriage certificates Wednesday as Washington, D.C.'s gay-marriage law took affect. The law caused the diocese to change its policies so it wouldn't have to give gay spouses benefits or handle adoptions for them. The change may allow the diocese to keep city contracts, but it could also push the faithful away. 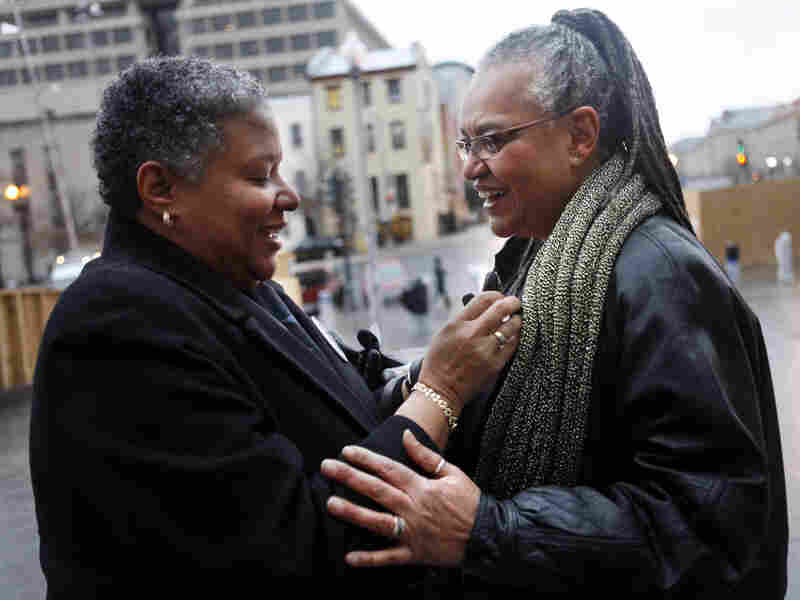 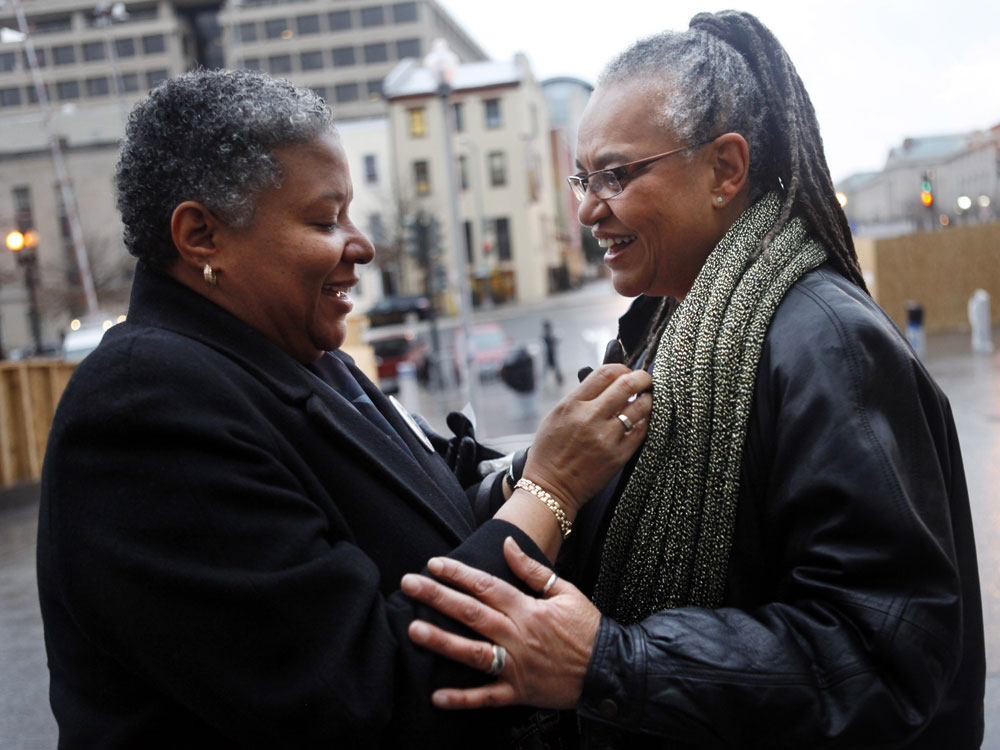 The District of Columbia began allowing gays and lesbians to apply for marriage certificates Wednesday, which means that the nation's capital joins five other states in allowing same-sex marriage. Before the doors to the marriage bureau even opened, more than 100 couples were standing in line.

Outside the D.C. courthouse, it is a familiar scene: A handful of religious conservatives are damning the couples, singing "God won't hear what you say when you pretend to pray."

Soon their protests are drowned out when the first batch of couples emerges from the D.C. courthouse, whooping and hugging and holding hands. They stand in front of microphones, euphoric that they can now, as one woman puts it, "marry the love of my life."

But for Catholics like Phillip Dunham, there is some ambivalence.

"I didn't go on Ash Wednesday for the first time in years," he says. "I really felt like I didn't belong anymore, and I couldn't be part of a church that didn't want me or anyone like me as part of it."

Clutching the hand of Allen Pittinger, his partner for the past nine years, Dunham says he has long felt snubbed by the Roman Catholic Church. But the final straw came when Catholic Charities in Washington, D.C., stopped handling adoptions so that it would not have to place children in the homes of gay couples. And as of Tuesday, it stopped providing spousal benefits for all employees, lest the organization give benefits to a gay spouse.

Pittinger and Dunham see these as cynical moves.

"Now, they don't have to provide any type of benefits for anyone going forward," Pittinger says.

Dunham adds, "And they can blame us. When I read that I thought, 'Wow, it's a great way to save on payroll costs. Blame the gay community, and come out smelling like a rose.' "

They say the Catholic Church in other places, such as San Francisco, found a way to accommodate gay couples, and they believe that the church and its charitable arm simply didn't want to.

Not so, says Susan Gibbs, a spokeswoman for the Archdiocese of Washington. Given the Catholic Church's history of social justice and fighting for working-class wages, this decision was wrenching for the church.

"This has been really hard for Catholic Charities and for the archdiocese, because we are so committed to working with the poor. It's what we do," Gibbs says.

She says the church had no choice. The D.C. government redefined marriage, and so Catholic Charities was forced to choose between keeping its contracts with the city and abandoning its belief about the holiness and purpose of marriage, in which a man and woman unite to have children.

"Really the priority was: How does Catholic Charities continue serving all the people it does now, while meeting the requirements and staying true to who they are as a Catholic organization?" Gibbs says.

She says by removing spousal benefits and getting out of the adoption business, the organization could still serve the poor without abandoning its theology.

But the Rev. Joseph Palacios, an openly gay priest affiliated with Georgetown University, says the new policies were "written by the lawyers." He says while the policies may allow the Catholic Church to keep its contracts with D.C., the church will lose the faithful.

"The church will find itself in increasing isolation with its own Catholic community," Palacios says.

Palacios sees this particularly among students, a trend that was captured by a recent poll of Catholics under 30 years old.

"The millennials who identify as Catholics are thinking of themselves as increasingly spiritual and less Roman Catholic," he says, and thus less bound to the traditions and rules of the church.

This translates into fewer people in the pews, he says. And he says churches that accept same-sex unions are benefiting from the Catholic Church's stand.

Of course, some conservative Episcopalians have flocked to the Catholic Church because of its harder line — suggesting that the battle over marriage and theology will be messy for some time.