Accessibility links
Chile's Leader Faces Criticism Over Quake Response Chile is dealing with one of the most powerful earthquakes ever recorded, just as President Michelle Bachelet's term is set to expire. She has been strongly criticized in Chile for her response to the quake, and some say the impending transition has complicated relief efforts. 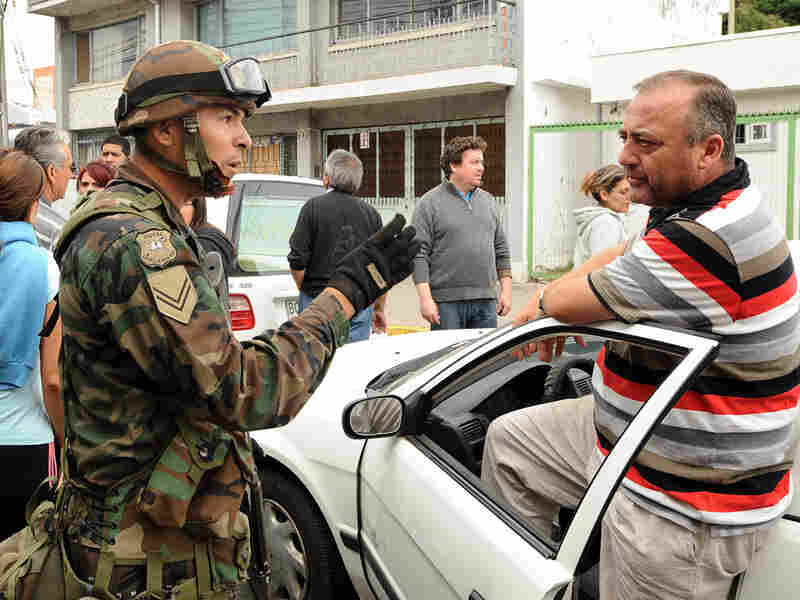 An officer with Chile's army talks to a civilian waiting in line to buy fuel at a petrol station in Concepcion on Tuesday. Critics say Chilean President Michelle Bachelet was too slow in sending the army in to restore order in the areas hardest hit by the Feb. 27 earthquake. Evaristo Sa/AFP/Getty Images hide caption 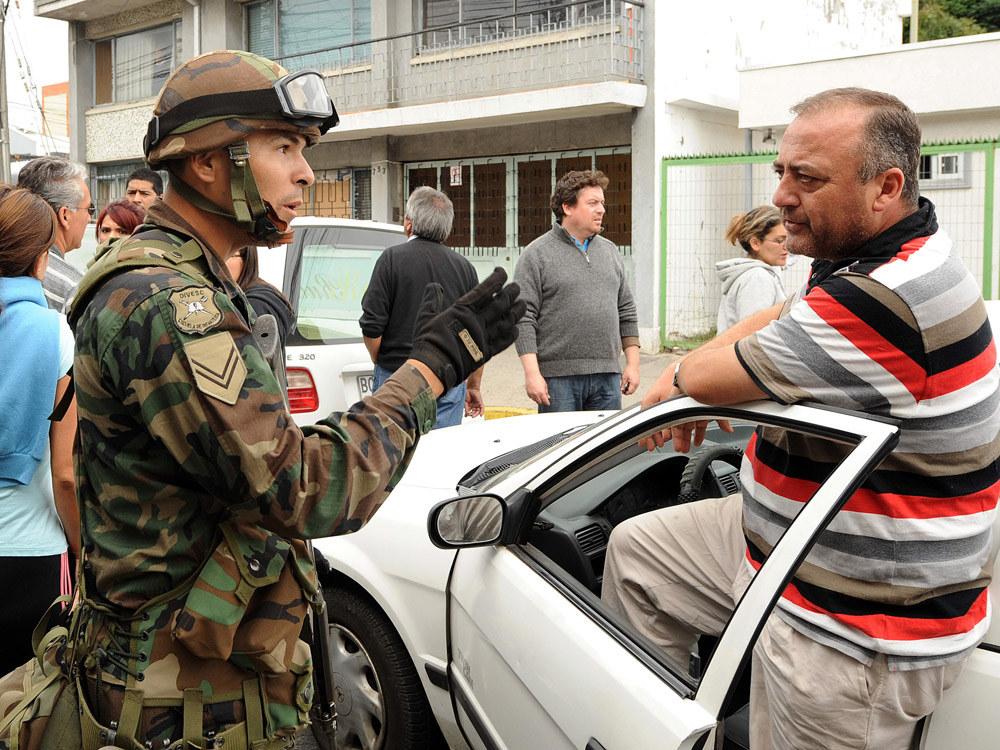 An officer with Chile's army talks to a civilian waiting in line to buy fuel at a petrol station in Concepcion on Tuesday. Critics say Chilean President Michelle Bachelet was too slow in sending the army in to restore order in the areas hardest hit by the Feb. 27 earthquake.

Chile is dealing with one of the most powerful earthquakes ever recorded while it is also on the verge of a political transition.

President Michelle Bachelet's term expires next week, and one of the richest men in the country, conservative Sebastian Pinera, will replace her.

Bachelet, a center-left politician, has been strongly criticized in Chile for her response to the quake, and some say the impending transition has complicated the government's handling of the disaster.

In an emotional hourlong radio appearance broadcast throughout Chile, Bachelet defended her response to Saturday's earthquake.

She said that in the hours immediately after the 8.8-magntiude earthquake, all the communications systems in the country collapsed. She said she wasn't able to find out if there was a tsunami. She said she couldn't even reach some of her key staff to arrange a helicopter in order to tour the damaged areas.

In the 1970s, Bachelet was tortured by the military under the dictatorship of Augusto Pinochet.

This week, she was hesitant to send in the army to restore order in the worst hit parts of Chile, and she has been strongly criticized for this.

Chile is one of the most prosperous nations in Latin America. In the capital, Santiago, glimmering skyscrapers jut up in front of the Andes.

The country has billions of dollars in fiscal reserves, and there is a sense of pride that the country knows how to handle earthquakes.

But Bachelet denied that she ever turned down offers of international aid. She said the government must make a thorough analysis of what is needed before Chile can request aid. She said rumors and misinformation are creating a national psychosis.

In addition to responding to criticism, Chile's first female president also stressed that the recovery is going to take time. She called for patience.

Bachelet's voice cracked with emotion as she told her people to have confidence that her government is doing everything possible to reach areas still cut off by the quake and tsunami.

But the criticism continues.

Raul Sohr is a political analyst at Chilevision, one of the country's largest TV networks, which also happens to be owned by Pinera, the incoming president. He says there is "no doubt" that the earthquake has seriously damaged Bachelet's legacy.

"She's been most unlucky. It all seemed to be glory in the final days of her government, but now she has stumbled badly," he says.

Sohr says the failure of Chile's tsunami warning system, the looting in quake-ravaged areas, and the slow pace of aid deliveries has made many Chileans feel that the government abandoned them during this crisis.

He says the natural disaster has exposed the deep divide between rich and poor in Chile.

"What earthquakes do [is] they make countries naked, and you can see through all the weakness. And here, for decades, we've been talking about exclusion, about the people who are [marginalized]," Sohr says. "Well, all of those marginals have come out into the streets. Some of them have looted supermarkets."

Especially in the capital, modern buildings withstood the quake unscathed, yet adobe and brick houses in poorer neighborhoods were severely damaged. Sohr adds that the earthquake also puts Pinera in a difficult spot.

The president-elect has been careful not to step on Bachelet's toes during the crisis, and Bachelet says her administration is working closely with his transition team. But Pinera has made it clear that he would have sent the army in immediately.

At an event Tuesday with visiting Secretary of State Hillary Clinton, Pinera declared that maintaining public order was the government's first priority during a crisis, followed by the distribution of food and water.

Pinera added, however, that this is not a time to assign blame but rather for all Chileans to work together to solve the country's huge current problems.