Accessibility links
Spreading Digital Revolution In A Cuban Living Room Twice a week, Yoani Sanchez transforms the living room of her small Havana high-rise apartment into what she calls the Blogger Academy. In a country where few people have an Internet connection, Sanchez is teaching her students the tools of a digital revolution that Cuba's government views warily. 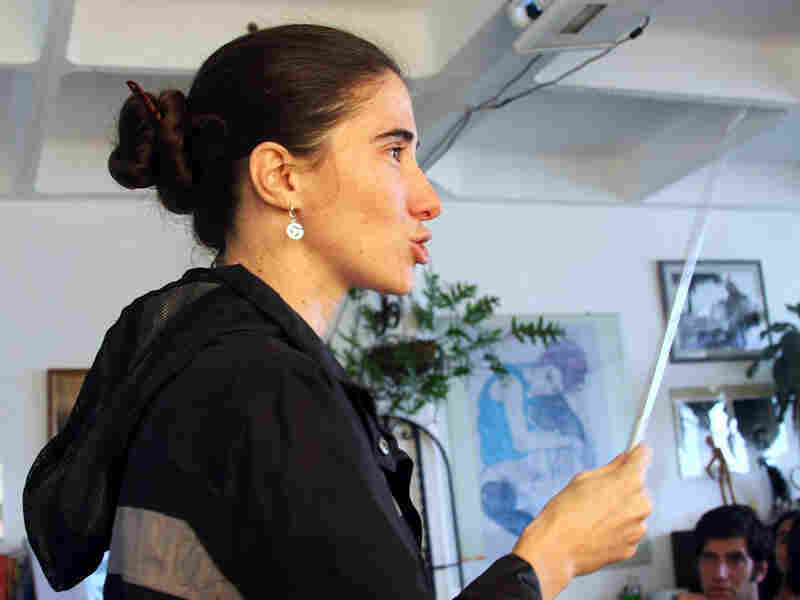 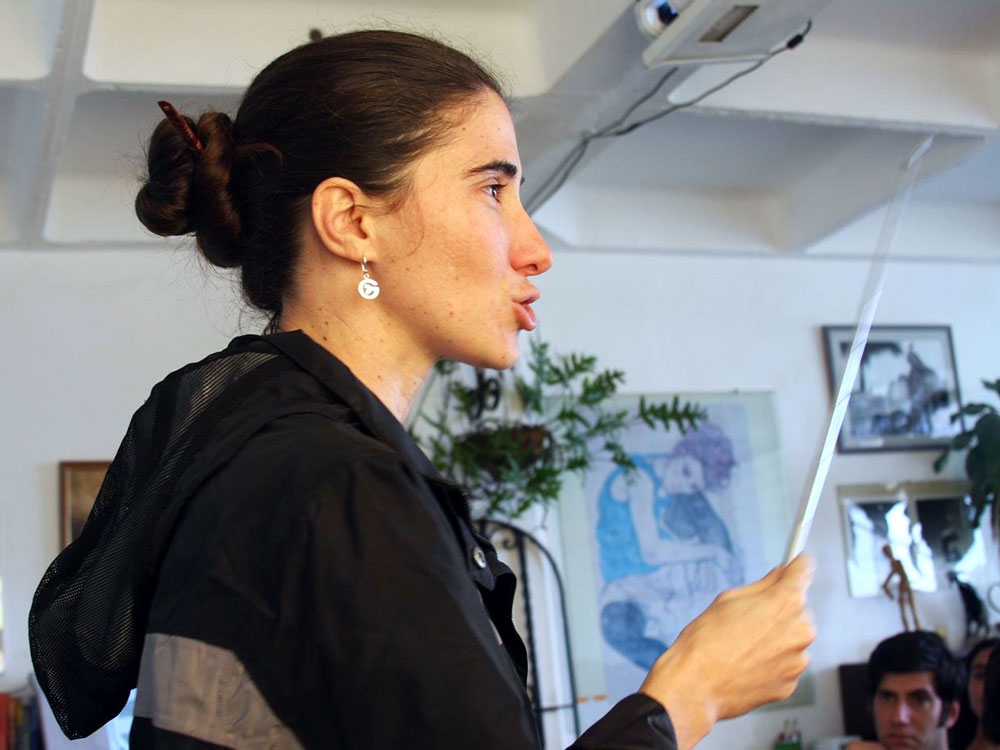 Twice a week, Yoani Sanchez transforms the living room of her small Havana high-rise apartment into what she calls the Blogger Academy. About 30 students cram inside to learn how to use WordPress, Wikipedia and the other tools of a digital revolution that Cuba's government views warily.

The small group of young Cuban bloggers has drawn international attention to their campaign for greater freedom of expression and Internet access. The government treats them as a security threat, backed by anti-Castro forces abroad.

On a recent afternoon, Sanchez is teaching her students about Twitter. Few Cubans have an Internet connection, so Sanchez is demonstrating how to send tweets from a cell phone.

There are a handful of laptops in the room, along with photocopies of articles with titles like, "Can Journalism Be Participatory?"

Sanchez, 34, has long black hair and the weary intensity of someone who has been living on the edge for a long time.

"Unfortunately, in Cuba, the act of wanting to find out what the official media is hiding is viewed as an attack on the integrity of the state," she says. "But that's not our intention. This is an educational project, not a political one."

Blogging Without An Internet Connection

Sanchez's blog, Generation Y, is political, but not with the kind of overheated rhetoric that has characterized the Cuba debate for so long. It's earned her several international awards, and though the blog is blocked on the island by the Cuban government, it's accessible through third-party Web sites.

Because she isn't allowed to have an Internet connection, Sanchez says, she writes her blog from home, then goes to tourist hotels and e-mails several postings at a time to friends abroad who run the blog for her. They send back reader comments, which often number in the thousands.

Among Cubans abroad, Sanchez has become the island's most famous symbol of opposition to the Castro government. But her name isn't mentioned in state-run newspapers or on TV here, and she's not widely known.

When her activism has moved from the computer screen to the streets, the response from authorities has been swift. The Blogger Academy has been left alone so far, though some students say they have been harassed by police and had equipment confiscated.

"We are Cubans ... We are living in the revolution — or maybe in the post-revolution — and we are good persons," says Orlando Luis Pardo, a 38-year-old blogger who is part of the academy.

"We don't [intend] to create chaos, social chaos. On the contrary, we [intend] ... that people in Cuba regain somehow their hope in Cuba, because a lot of young people that I know will say, 'When you get some money, find your way out of the country.' "

Cuba's bloggers have attracted the attention of President Obama, and he gave Sanchez an interview by e-mail last fall. It's that degree of American enthusiasm for Sanchez that gives the Cuban government cause to view her and her group as a tool of U.S. foreign policy.

In another apartment building on the opposite side of Havana's Revolution Square, journalist Rosa Miriam Elizalde strikes back at Cuba's critics from a Macintosh laptop in her bedroom. She's the editor of Cubadebate, the pro-government Web site best known for its most famous contributor, retired President Fidel Castro. He writes a Web feature called "Fidel's Reflections."

Elizalde follows Sanchez's tweets and counters them with her own.

"We're not talking about some blogger in Sweden," Elizalde says. "We're talking about a blogger in Cuba, which the United States has been waging economic and political warfare against for the past 50 years. And this is just the latest form of that warfare."

Just as Sanchez sees her small group standing up to the power of the Cuban state, Elizalde sees Cuba as the underdog, besieged by a hostile media and the giant to the north. She says she doesn't have a problem with the Blogger Academy. But to her, Sanchez's overnight fame and the international support for her blog seem like a coordinated campaign to attack Cuba.

"I think she's a symbol that's been constructed for a specific political purpose, as part of an aggressive U.S. foreign policy," Elizalde says. "She obviously gets a lot of technical support if she's running a site that's being translated into 18 languages."

Sanchez says she will continue using the money she has made from her writing and her awards to help other Cubans launch their own blogs.