Accessibility links
401(k)s Still Fall Short As A Retirement Strategy The market plunge during the Great Recession has left many people without adequate funds for a comfortable retirement. Only about half the U.S. workforce is covered by some type of an employer-sponsored retirement plan. That means many workers depend on Social Security. 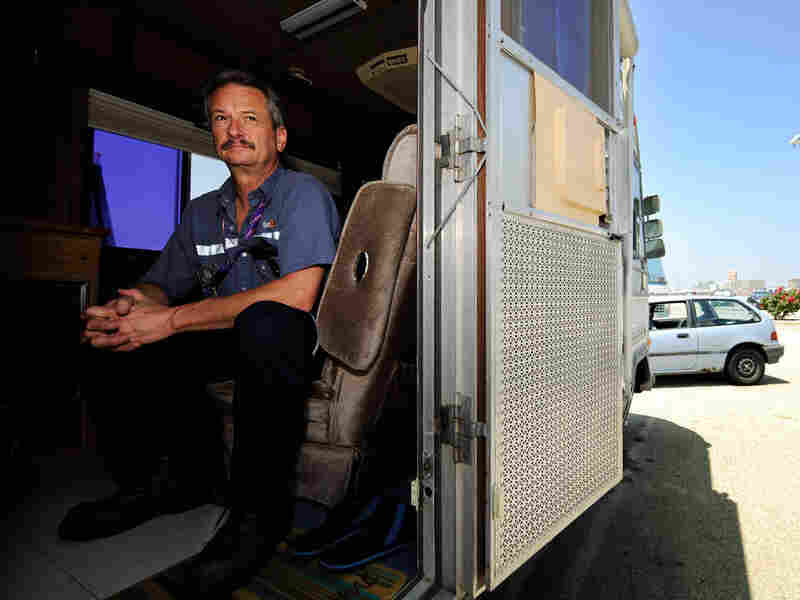 Aircraft mechanic Jere Herr of Indianapolis prepares to go to work while seated in his recreational vehicle, parked in a lot at the Los Angeles International Airport. He lives by the airport to save money for the future. One-third of Americans will have to rely on Social Security benefits — not pensions — in their retirement years. Kevork Djansezian/Getty Images hide caption 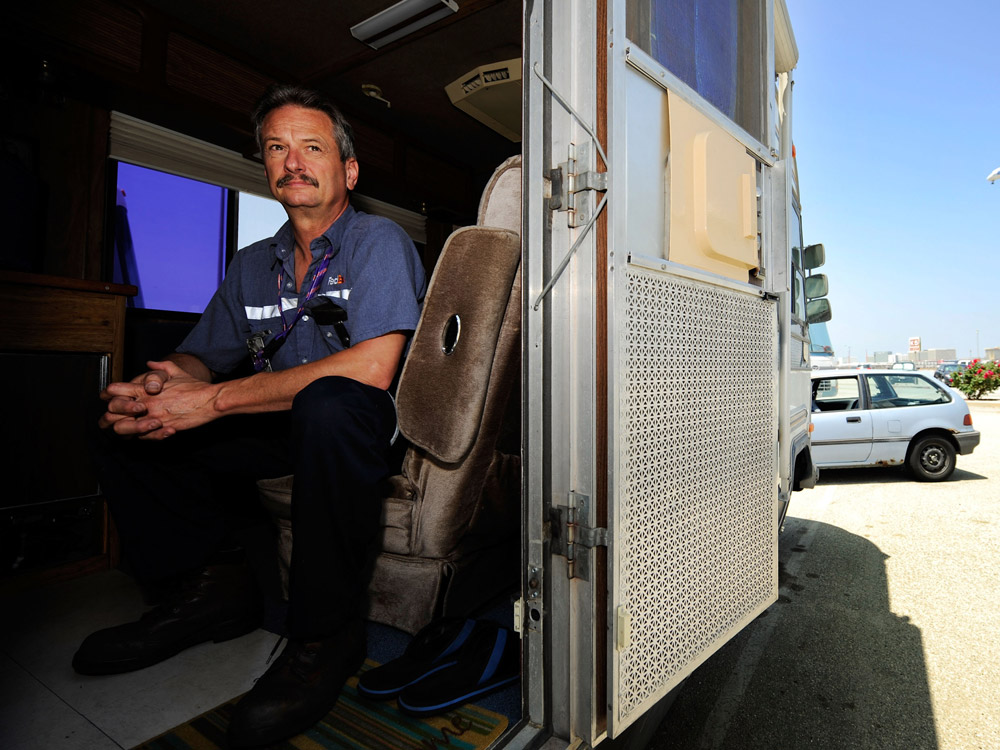 Aircraft mechanic Jere Herr of Indianapolis prepares to go to work while seated in his recreational vehicle, parked in a lot at the Los Angeles International Airport. He lives by the airport to save money for the future. One-third of Americans will have to rely on Social Security benefits — not pensions — in their retirement years.

Most American workers were woefully unprepared for retirement before the financial crisis struck. The stock market crash that followed made things even worse.

"The financial crisis certainly laid bare how inadequate our retirement savings system is," says Alicia Munnell, the director of the Center for Retirement Research at Boston College. She points out that one-third of all workers will likely end up depending on Social Security for all of their retirement income.

That's partly because only about half the U.S. workforce is covered by some type of employer-sponsored retirement plan. And most of those are 401(k) plans, which usually require employees to contribute and make investment decisions.

Even before the financial crisis, the average balance in 401(k)s for workers nearing retirement was just $78,000. After the market plunged, that average was reduced to about $56,000, according to Munnell's calculations. That's just not enough for a comfortable retirement, says Roger W. Ferguson Jr., president and chief executive officer of TIAA-CREF, the financial services company that offers retirement plans for employees in the academic, medical and nonprofit fields.

In recent years, the limits on contributions to IRAs and 401(k)s have been raised. In addition, the government has encouraged businesses that do offer 401(k) programs to enroll workers automatically, unless the workers specifically decline. Ferguson says it's a good first step. But Munnell believes these initiatives aren't enough.

Where Seniors Get Their Retirement Income

Americans 65 and older rely heavily on Social Security for their retirement income — even at the top income bracket, according to the Center for Retirement Research at Boston College. Meanwhile, the majority of Americans can't depend exclusively on pension plans, including 401(k) and other defined contribution plans, as well as defined benefit plans, because of the substantial losses these accounts sustained during the Great Recession.

The bottom, middle and top income tiers each represent one-third of the population age 65 and older. The bottom tier includes those with annual income of $16,758 or less. Seniors with income between $16,758 and $37,161 fall into the middle tier. The top tier encompasses income above $37,161.

She thinks it should be government-mandated savings, but she says it would likely need to be managed by the private sector to be politically palatable.

"Her critique is absolutely right," says John Bogle, who founded the Vanguard Group, one of the nation's largest mutual fund companies.

Bogle says the government would have to set the structure of any new program and ensure that the fees charged by fund managers are reasonable. Retirement money managers should have a fiduciary responsibility and a legal requirement to act in the investor's best interests, he says, adding that this is something in short supply today. Bogle also says that it shouldn't be easy to withdraw funds from retirement savings.

Planning For The Future With More Education

TIAA-CREF's Ferguson is skeptical of constructing a new tier of retirement savings.

High Anxiety: The Impact Of Higher Fees On Investments In The S&P 500

The investment returns are not adjusted for inflation.

"I think it's very hard in this day and age to talk about another government mandate," Ferguson says. He believes a serious effort at education, coupled with nudging people in the right direction though automatic enrollment and automatic saving increases, could solve much of the problem.

Ferguson says many people don't realize that they need to save between 10 percent and 14 percent of their pre-retirement gross income to have a reasonable income replacement when they retire.

"If we talked much more about it, people would wake up and recognize how much they have to do," Ferguson says.

Finally, he says, more attention should be paid to getting people to convert at least part of their retirement nest egg into a guaranteed lifetime income stream so they don't outlive their retirement savings.