Accessibility links
Belief On The Big Screen: Secrets Of Special Effects A spaceship lands. Humans become avatars. A man in a cape can fly. Special effects have made movies magical for decades. NPR's Susan Stamberg goes backstage to learn how moviemakers frighten, fool and thrill the audience.

A spaceship lands. Humans become avatars. A man in a cape can fly. Special effects have made movies magical for decades. Big-dollar or ultralow-budget, the goal is the same: to frighten, fool or thrill the audience.

For a huge movie like Avatar, various special effects companies spent years on the project. One of them, Legacy Effects, had about 120 people working on the look of the inhabitants of the alien moon, Pandora.

But special effects happen on a smaller scale as well. In a cramped trailer in Van Nuys, Calif., two guys mix up fake blood for a slasher scene in C.L.A.S.S. (that stands for Criminal Law and Student Slayings). It's so low budget — $1 million — the filmmakers are shooting in producer Sheldon Robins' aunt's house for the film's final scene.

Robins put much of the little money he had toward special effects makeup. "The most important part was making sure my kills didn't look cheesy," he says.

Jerry Constantine will commit the makeup murders. Constantine did special effects makeup work on The Curious Case of Benjamin Button, Watchmen and Van Helsing. Usually, for bloody scenes, Constantine attaches plastic tubing to the actor's back, and with a syringe, fires fake blood through the tubing during the live scene. But not on this budget.

"They don't have time for the two-hour makeup for me to pull the actor, glue the appliance on, and then spurt the blood," Constantine explains. "So we fake it out."

Viewers will see the actor after the throat's been slit. (Sorry, but it's all make-believe, remember.) First, Constantine takes a superthin, neck-sized piece of latex foam and cuts a horizontal slit in the middle. Constantine's assistant is Mike Measimer — they've been working on films together for 11 years. Constantine holds the piece up to the actress' neck and proclaims that it will work perfectly, so they glue it on. The two men work in tandem, like surgeons in reverse (wearing black surgical gloves.)

Constantine powders the line where the foam meets skin. With a sponge dipped in makeup, he dabs various pinks onto the fake flesh, then sprays on some pale brown freckles. It looks just like the woman's natural neck, but with a big empty slit in the middle. And now, the slashing begins. Before it gets too gory, we're going to cut away (as it were) to some of the special effects folks who worked on Avatar.

Legacy Effects, the special effects company for Avatar, is the offspring of the Stan Winston Studio. Winston worked with Avatar director James Cameron on his Terminator films, creating the menacing bots from the future. (Winston also did Aliens and the groundbreaking dinosaurs in Jurassic Park.) Winston's studio started working with Cameron on Avatar in 2006, but Winston died of cancer in 2008. 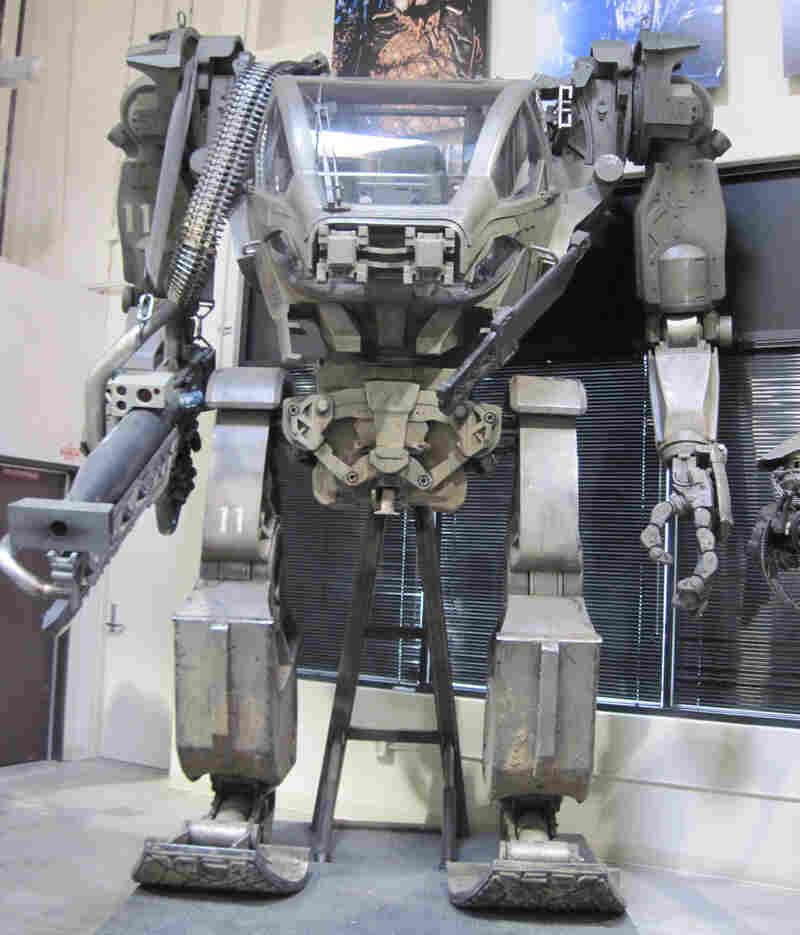 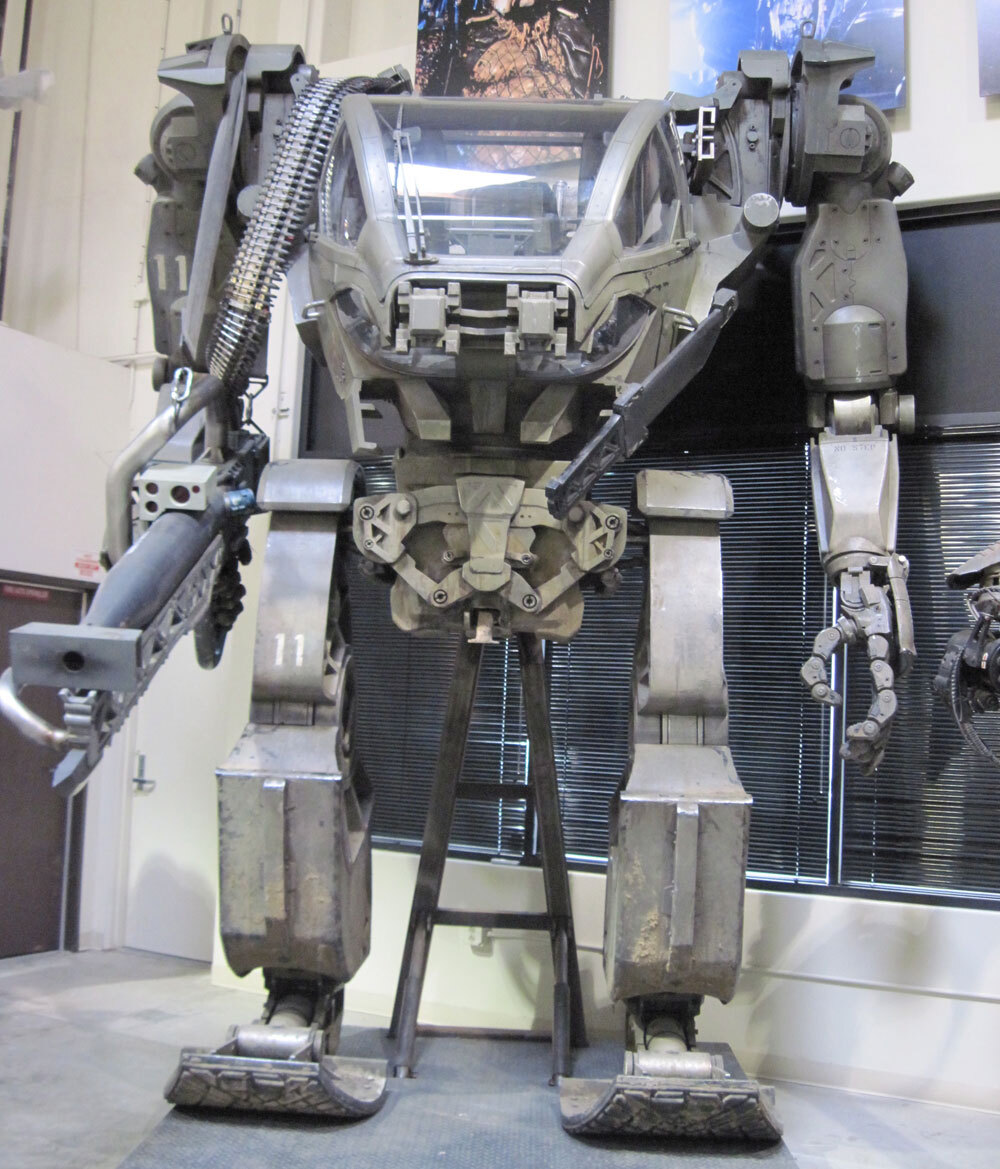 John Rosengrant, Winston's protege of 25 years, and a few others at the studio started Legacy Effects, a name in honor of their friend and mentor. They carried on the work in Avatar, creating the specialty props such as the enormous Armored Mobile Platform (AMP) suit, which looks like a tank on legs. The AMP is on display in Legacy Effects' warehouse, where all their movie, TV and commercial props and makeup effects are made. The AMP stands 13.5 feet high, and it's made of 200 distinct pieces — hand-detailed to suggest a metal texture.

"It's like Apache helicopter meets power loader from Alien," says Rosengrant, who worked on all three Terminator movies. Standing nearby the AMP suit in the warehouse is a rogues' gallery of specialty props: the Avatar Scorpion cockpit; the T-600 robot and two-gun turret tank from Termination Salvation; and the Iron Monger from Iron Man.

Rosengrant and his team also created the prosthetic legs actor Sam Worthington wore in Avatar. They found a Sam-sized young man — whose paralysis didn't stop him from playing basketball — and made a cast of his legs.

"We finished them off in silicon and punched individual hairs into them. [The prosthetic legs] would get strapped onto Sam, and his legs would go down into holes in the wheelchair," explains Rosengrant. "I think it was important to make sure that this was convincing, because it really sells the idea of Jake in his freedom as an avatar versus how he was trapped on Earth."

Rosengrant's team also conceived the look of Pandora's Na'avi people — with their enormous eyes. The team selected snow leopard eyes as inspiration and played with the color, turning them more golden and less green.

"You always draw from nature," says Rosengrant, "because you're trying to make the unbelievable believable." 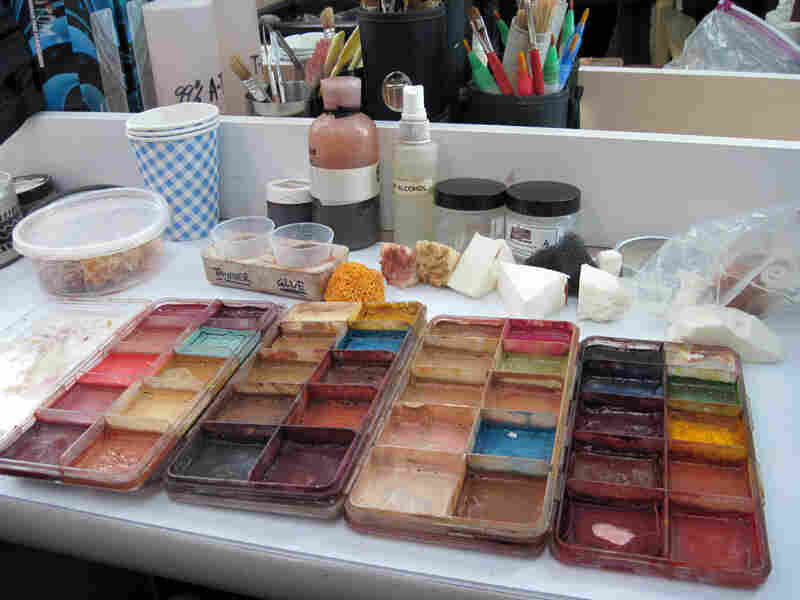 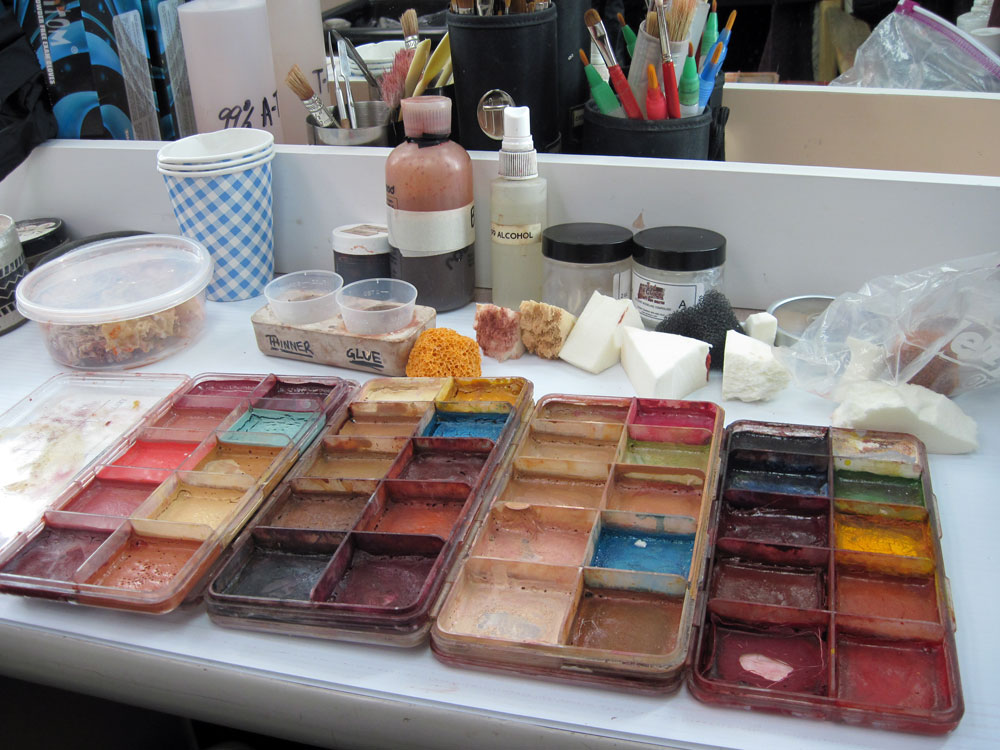 Tools Of The Trade: It takes an extensive color palette for makeup artists Jerry Constantine and Mike Measimer to create their on-screen illusions.

Now, Back To Slashing

Making the unbelievable believable is a tall order on a small budget, but special effects makeup artists Jerry Constantine and Mike Measimer are still working on wreaking murderous mayhem on an actress' neck in C.L.A.S.S. So far, they've made the prosthetic to look completely natural with the actress' skin.

Constantine adds cotton to the horizontal slit area. He's creating what he delicately calls the "meat." The cotton will give dimension to the wound area after red coloring is applied to look like blood. Then, with a tiny spatula, Constantine spreads what looks like raspberry jelly on top. And ick — it suddenly looks like thickened blood.

"This where it starts to look like what it is," says Constantine. And it does. It looks so real, you want to turn away.

To learn about other unusual Hollywood jobs, listen to Susan Stamberg's pre-Oscars stories from past years:

With all the advanced special effects on movies these days, it's hard to believe that Constantine and Measimer are still doing it the old-fashioned way. But even at a big studio like Legacy Effects, "slashing" is alive and well. Alan Scott, one of the co-owners of Legacy and a Stan Winston protege, stands by the old methods.

"The technologies that have been used in special makeup effects that worked for nearly 100 years still work," Scott says.

He says digital blood is not as messy, but you don't have actors reacting to something visually horrible, either.

"If you just have a tennis ball that you're playing to, it's hard to understand that there's a 30-foot creature trying to eat you," Scott says.

Scott and Rosengrant were inspired by all the old, great classic horror films — Frankenstein, The Mummy — and actors like Boris Karloff and Lon Chaney. In fact, Scott says, he'd love to do a full-on zombie movie.

"That's part of our roots," he says. "We love horror. My wife doesn't understand it, but that's my whole Netflix library."