Accessibility links
Is the Planet's Carbon Sink Getting Too Full? The ocean's job is to keep the planet cool by absorbing carbon dixoide from the atmosphere. These days, it's working overtime 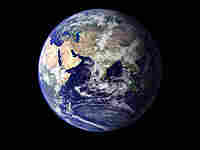 A view of Africa, Asia and the Indian Ocean from space. NASA hide caption 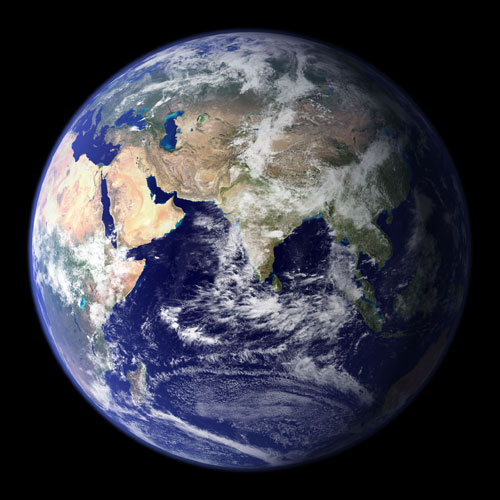 A view of Africa, Asia and the Indian Ocean from space.

You can't talk about climate change without talking about the ocean. Seas dominate life on Earth; almost three-quarters of the planet are covered by the ocean. Drop a person into the ocean and it's the size equivalent of an ant on Mount Everest.

But the ocean's role in keeping the Earth habitable is often overlooked. It absorbs about half of all carbon dioxide that is released into the air by burning fossil fuels. But as the Earth warms up, the ocean is losing this ability. Here, Jeff Chanton, a Florida State University oceanographer, explains what's going on with our oceans.

Q. Why is the ocean warming?

The same heat trapping gases that are warming the Earth are also driving up the temperature of the ocean. About half of the carbon dioxide released into the atmosphere is absorbed by the ocean, keeping the Earth from getting too hot. But rising greenhouse gas emissions, combined with the loss of trees — a key absorber of carbon dioxide --due to deforestation, places more of a burden on the ocean. Just as more carbon in the atmosphere means that we feel the heat, more carbon in the water means a warmer ocean.

Q. Humans live on land. Why is it a big deal that the ocean is warming?

Because the ocean expands and becomes less dense as it warms, a process called thermal expansion. So naturally, as it gets warmer, the ocean takes up more space and causes sea level to rise. Global average sea level rose 3.1 millimeters per year between 1993 and 2003. (Melting glaciers and ice caps caused about .77 millimeters of it.)

Thermal expansion is one of the most significant contributors to the rising sea levels — a huge problem for people living next to the ocean in low-lying areas. In the U.S., barrier islands like Miami Beach and Atlantic City are especially vulnerable to flooding. The Intergovernmental Panel on Climate Change (IPCC) projects that many millions of people could be impacted by flooding by 2080 due to a rise in sea levels. If the trend continues, some small islands could be wiped off the map entirely.

Another problem is that gases are more soluble in cold conditions, and as the ocean warms, it loses one of its most crucial functions in regulating the Earth's temperature. Its ability to absorb carbon dioxide diminishes, which leaves more of the heat-trapping gas in the atmosphere.

Q. What do warming seas mean for creatures living in the ocean?

Scientists have noted that ocean water is becoming more acidic because it has absorbed more carbon dioxide. The increase in acidity harms marine life, particularly organisms like coral reefs and some phytoplanktons. This can lead to population decreases and can upset the balance of the food chain as many fish and whales feed on phytoplanktons and coral, throwing the marine ecosystem out of sync.

Q. If seas continue to warm, what will the impact be around the globe?

According to a 2007 IPCC report on climate change, the impact will vary regionally, but coastal and river flood plains areas are among the most vulnerable.

On small islands and in Africa, the erosion of beaches and coral bleaching will harm local fisheries and reduce tourism dollars. The heavily populated mega-delta regions in South, East, and Southeast Asia will be highly vulnerable to sea flooding. The Great Barrier Reef and Queensland Wet Tropics will see a serious loss of biodiversity. And in Latin America, flooding will cause shifts in southeast Pacific fish stocks.

Scientists say the loss in coastline will be not so much a gradual process, but the result of ongoing temperature rises combined with sudden big storms and catastrophes.

Q. Can anything be done to reduce the impact to ocean life and coastal areas?

Scientists have unsuccessfully explored ways of engineering the Earth's way out of the problem. For example, they have discussed the idea of releasing sulfate aerosols or dust into the atmosphere. The dust would reflect light and thus cool the Earth. Volcanoes could serve the same function because an eruption injects sunlight-reflecting particles into the atmosphere. When Mount Pinatubo erupted in the Philippines in 1991, the area's temperature was cooler for a couple of years.

But no one would go out and provoke a volcanic eruption, and no one has come up with any other trustworthy engineered solution. The only real solution is the control our greenhouse gas emissions.