Accessibility links
Mighty Mussels Have Industrial Strength Mussels hold tight to rocky seashores with the help of their strong but flexible "beards," or byssal threads. These threads are made of a sticky protein loaded up with iron that suggests a new way of making flexible but strong materials for industrial uses. 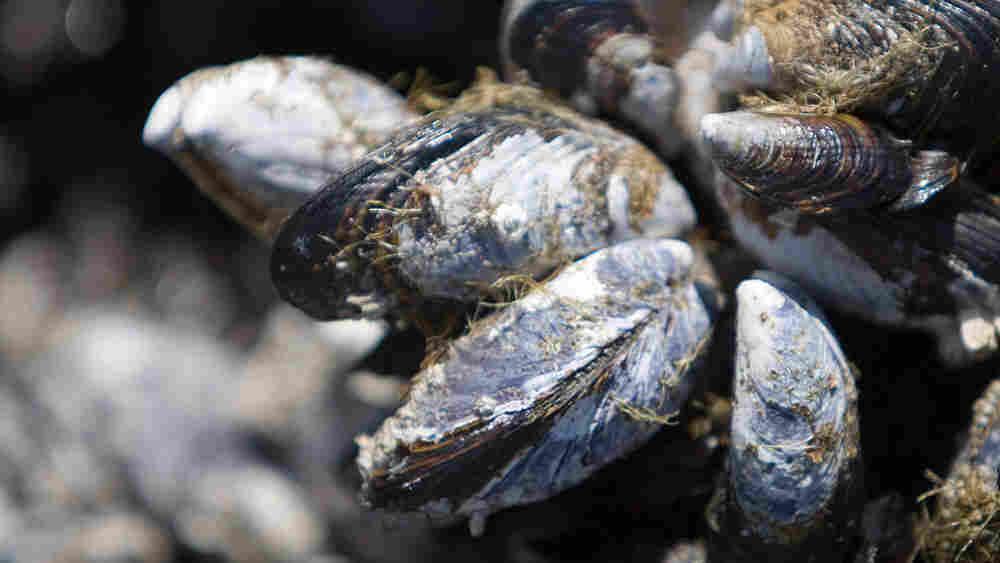 The byssal threads help these mussels hang on to rocky outcroppings and might suggest a new way of making flexible but strong materials for industrial uses. jeffk/via flickr hide caption

Mussels can cling to rocky shores with an iron grip, and a new study suggests that's thanks to a special arrangement of protein and metal ions in their bushy "beards."

These "beards," which are removed by cooks before mussels become a tasty treat, are made of 50 to 100 individual fibers, known as byssal threads. The threads anchor mussels onto rocks that repeatedly get hit by crashing waves — and to do that, scientists knew the threads had to be simultaneously hard and stretchy. 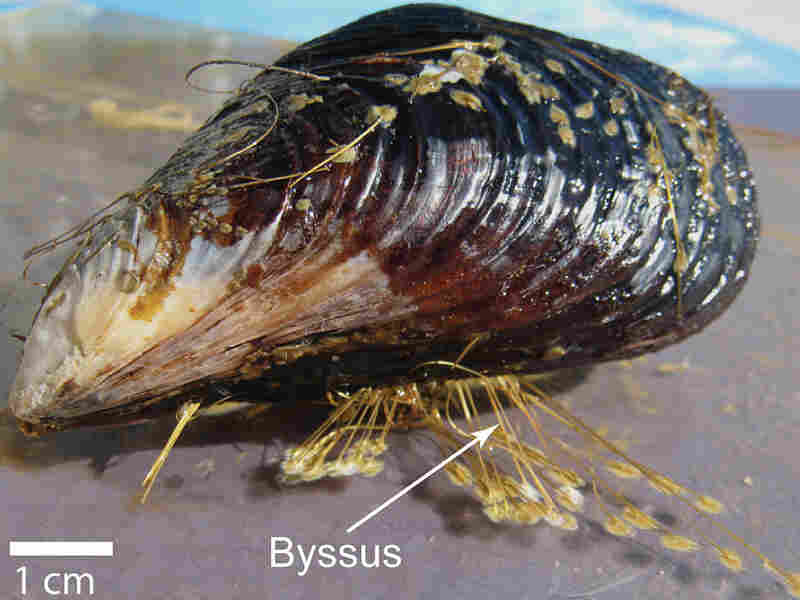 Byssal threads, like those visible on this mussel, are protected from abrasive damage by a hard and knobby coating loaded up with iron. Courtesy of Matthew Harrington hide caption 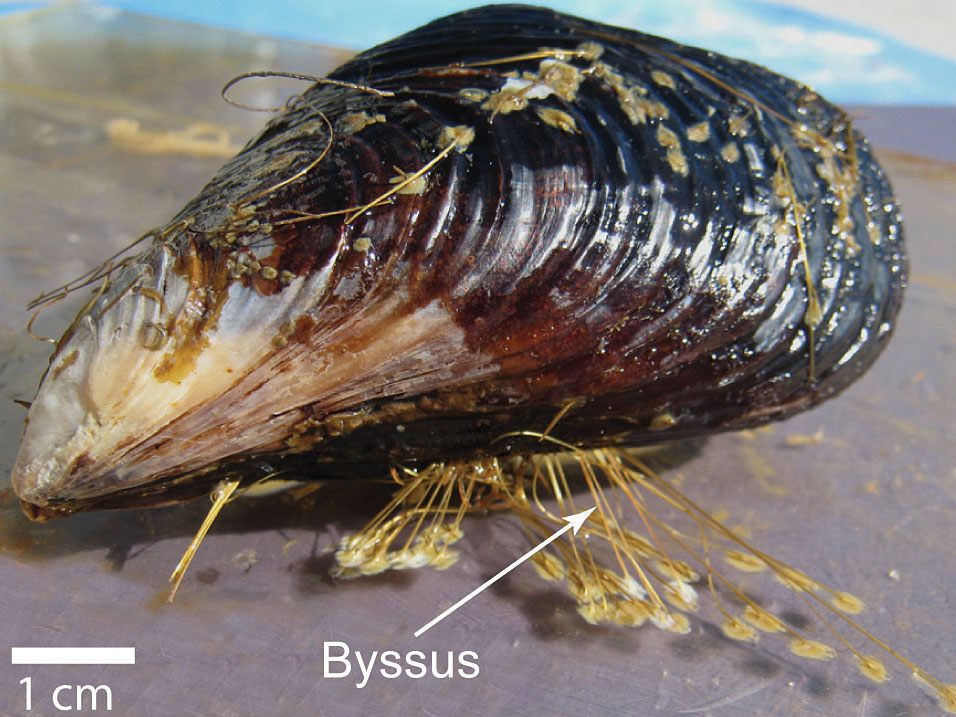 Byssal threads, like those visible on this mussel, are protected from abrasive damage by a hard and knobby coating loaded up with iron.

"Normally, stretchy and hard don't go together," says Matthew Harrington, a researcher at the Max Planck Institute of Colloids and Interfaces in Potsdam, Germany.

But that's what the mussels need, Harrington says, because "they're not only facing these huge wave forces which are trying to, you know, rip them off the rocks, but also they're being blasted with debris like small pieces of sand and other debris in the water that are basically acting like sandblasting, and creating these really abrasive environments to live in."

The Chemical Makeup Of Byssal Threads

To find out how the byssal threads do this tricky job, Harrington and his colleagues studied them with a microscopic technique that reveals not only the structure of the thread, but also its chemical makeup. 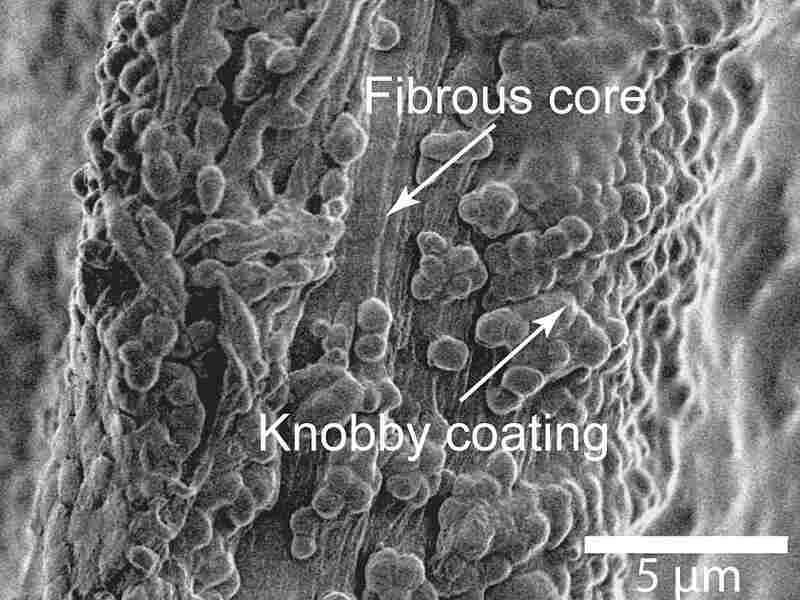 This microscopic view of a byssal thread shows the fibrous core and knobby coating that enables the mussel to cling to rocks. Courtesy of Susan Weichold hide caption 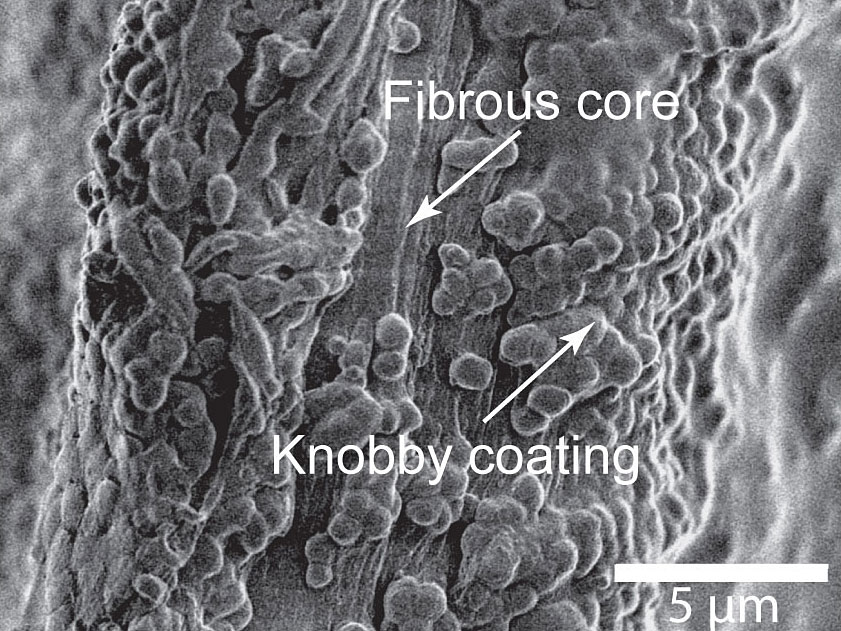 This microscopic view of a byssal thread shows the fibrous core and knobby coating that enables the mussel to cling to rocks.

They found that the threads have a core of a soft, stretchy collagen-like material similar to what you'd find in a person's Achilles tendon. That's surrounded by a harder outer coating, composed of protein that's linked together with iron ions.

"The coating has this really kind of weird, rough texture — very, like, knobby — almost has kind of like a sandpaper-like texture," says Harrington. The coating has hard granules embedded in more of a soft matrix.

As the mussel gets hit by waves and debris, any small cracks in a byssal thread's coating would only occur between the hard granules. "You kind of are able to distribute the damage more generally over the whole structure and allow it to stretch to longer lengths without seeing huge damage," says Harrington.

The researchers describe their findings in the journal Science. Harrington hopes that the structural design used by mussels could someday be used for new coatings for man-made materials that are both stretchy and hard. "To combine these two properties hasn't really been achieved yet in engineering materials," he says.