Accessibility links
Sept. 11 Trial May Shift To Military Court The Obama administration is close to deciding that Khalid Sheikh Mohammed — the self-professed mastermind of the Sept. 11 attacks — will be tried in a military court, NPR has learned. But an announcement is weeks away, an official said.

The Obama administration is close to deciding that Khalid Sheikh Mohammed — the self-professed mastermind of the Sept. 11 attacks — will be tried in a military court alongside four other men implicated in the plot, NPR has learned.

People familiar with the talks told NPR that the Obama administration was inching closer to the decision. A White House official would only say that a review of the available options was still under way and it could be weeks before the final decision is made. 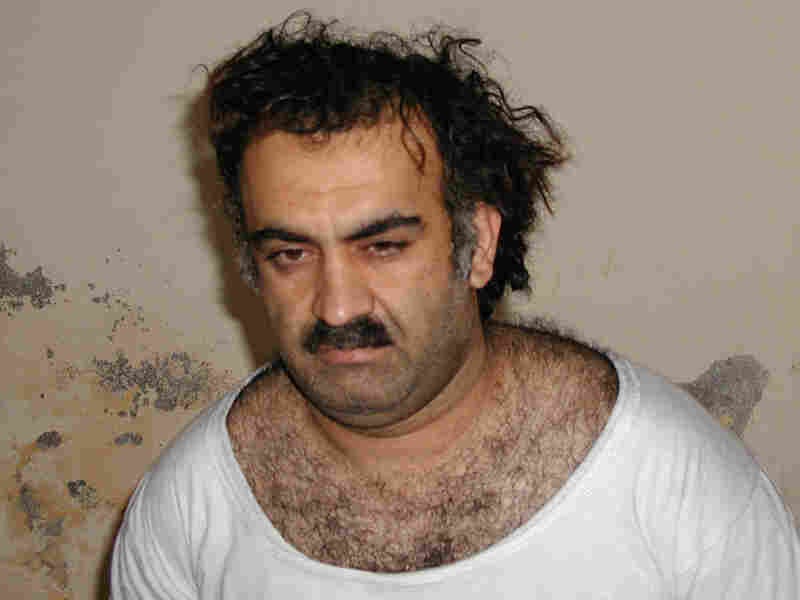 In this now iconic March 1, 2003 photo, Khalid Sheikh Mohammed is seen shortly after his capture during a raid in Pakistan. AP hide caption 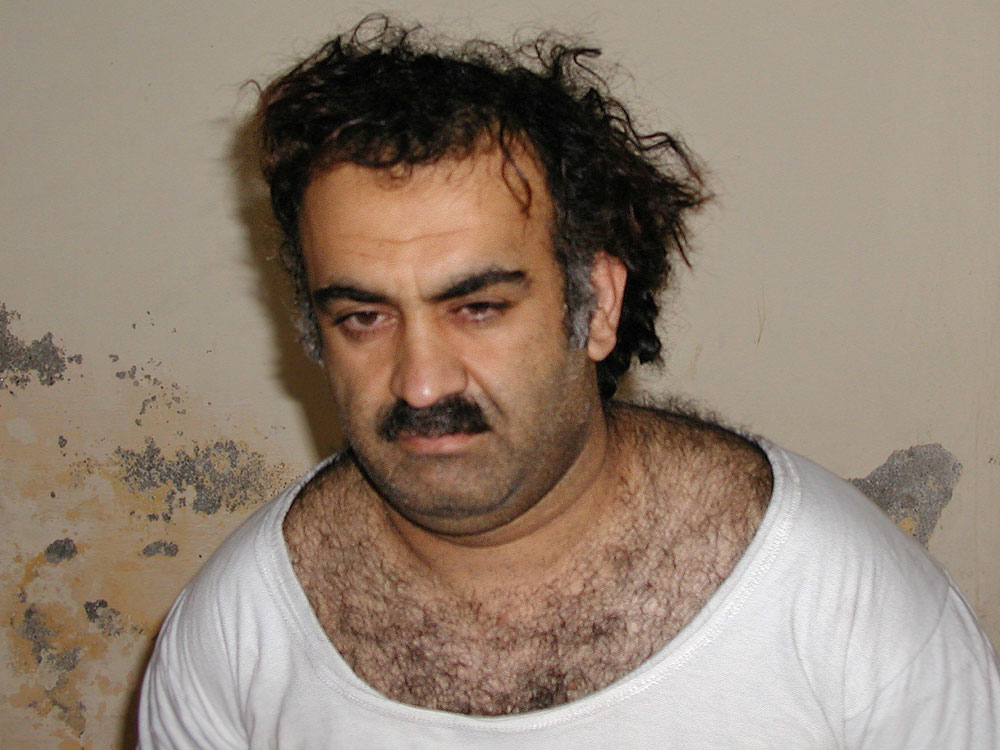 In this now iconic March 1, 2003 photo, Khalid Sheikh Mohammed is seen shortly after his capture during a raid in Pakistan.

The move to try the Sept. 11 suspects in a military commission would be a major reversal for the administration. Attorney General Eric Holder announced in November that Mohammed and his co-defendants would tried in a civilian court in New York.

The attorney general picked the Southern District of New York, in Manhattan, as the venue, saying prosecutors there had so much experience with terrorism cases they would be sure to get a conviction for the five men.

His confidence aside, fierce political opposition began to build against prosecuting the men in the criminal court system. And that opposition appears to have prompted an about-face.

Republicans and even some Democrats expressed concern that the civilian legal system — with its protections for defendants — could permit a suspected Sept. 11 terrorist to go free, perhaps on a technicality.

Initially, New York City Mayor Michael Bloomberg had been supportive of trying the men in Manhattan. Then he announced in January that he didn't think that New York was a good venue for the trial. He said it would be too expensive and would hobble lower Manhattan with the increased security necessary for the trial.

How the trial would unfold before a military commission is unclear, but it is likely that civilian lawyers will be able to take part in the trial. It is also likely to take place somewhere in the continental U.S., although it is unclear where.

Obama signed new rules for the military commissions into law in 2009. Among the changes: limits on coerced and hearsay evidence, and defense attorneys are supposed to be accorded more rights and resources.

But civil liberties groups oppose moving any of the detainees' cases to the military commissions and criticized the administration for mulling an about-face.

Even with the Obama changes in place, the groups say, the commissions would provide second-class justice. They claim it sets up an alternative system of justice that could apply to other suspects in other cases — not just terror suspects — in the future.

If the administration makes the switch, the clock on the prosecutions would have to be reset. There would have to be fresh indictments; fresh rulings on admissibility of evidence; fresh motions from counsel.

Some analysts say that, in a strange way, if these men are tried in a military court, it could hand al-Qaida a victory. Al-Qaida doesn't see itself as a band of criminals, but as a warrior in a giant struggle with the non-believers. In a sense, the argument goes, putting them in military commissions elevates their status.

Another potential propaganda value, analysts say, is that al-Qaida has maintained for some time that the U.S. talks about justice, but changes the rules when it suits Washington's purposes.

The flip side is that critics have said a civilian trial in New York would give al-Qaida a global platform for their cause. There was some concern that Khalid Sheik Mohammed would use that his advantage.

Sources say there is still plenty of horse trading to do between the administration and Congressional leaders before a final decision is made. Moving Mohammed and other detainees to a military court would win support among key Republicans on Capitol Hill.

The Obama administration needs Congress if it wants to close the detention center at Guantanamo Bay, and fulfill one of the president's campaign promises. Among other things, Congress has to provide the money to pay for the alternative facility in the U.S. where detainees could be held.

Sen. Lindsey Graham, a Republican from South Carolina, is a former military lawyer and has been a key player in the negotiations with White House Chief of Staff Rahm Emanuel on the issue of trying the detainees.

Graham favors closing Guantanamo Bay under certain terms. But the key issue is whether to treat detainees as criminals or as enemy combatants. Graham says that they ought to be seen as enemy combatants and he's introduced legislation toward that end.