Accessibility links
U.S. Unemployment Rate Holds At 9.7 Percent The Labor Department said employers cut 36,000 jobs in February, well below analysts' expectations of 50,000. The department said the recent severe snowstorms that hammered the East Coast may have affected job losses, but it wouldn't quantify the impact. 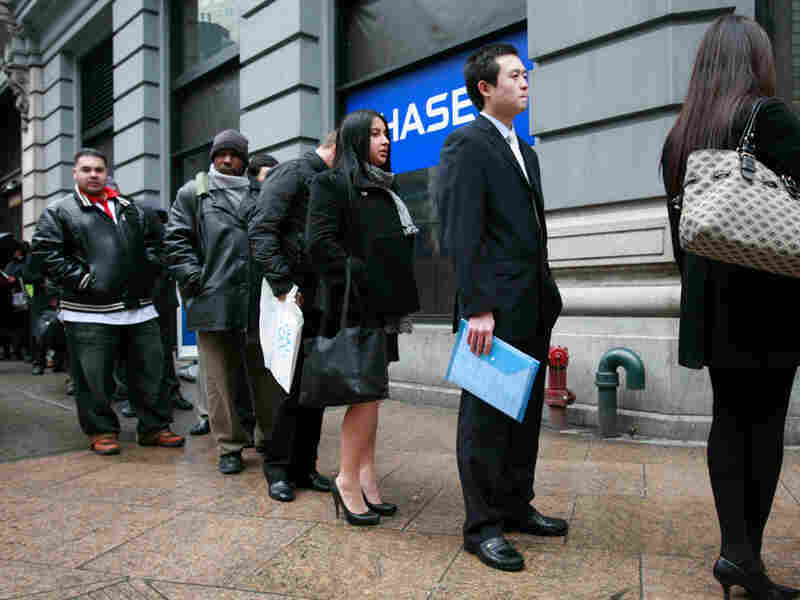 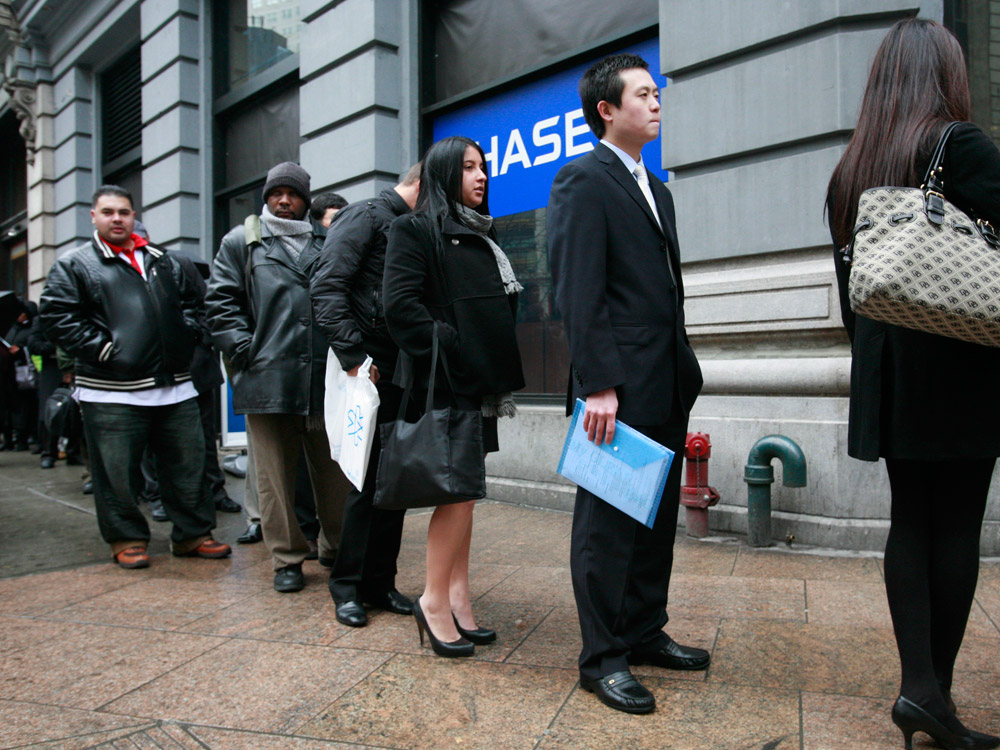 Tan Ruihan (second from right), who recently received a master's degree in finance from Boston University, waited in a line to enter a job fair last month in New York.

U.S. unemployment held steady at 9.7 percent in February, the Labor Department reported Friday, and the economy shrugged off concerns that recent snowstorms would wreak havoc on the number of jobs lost.

The report said employers cut 36,000 jobs, fewer than the 50,000 that most analysts had expected — numbers that would have put the jobless rate at 9.8 percent.

Economists had expected the massive East Coast storms to inflate job losses by as much as 100,000, but the actual impact wasn't nearly as high, said Alan Levenson, chief economist at T. Rowe Price in Baltimore. The Labor Department said it wouldn't quantify the effect of the storms, which hit the same week that the government surveys businesses about their payrolls. Employees who couldn't make it to work and weren't paid aren't included on those payrolls.

Interactive: Jobs That Have Become Obsolete

"There were clearly a lot of people affected by the weather," Levenson told NPR. "The fact that the unemployment rate remained unchanged shows either much less of an impact from the snow or a slightly firmer underpinning of the labor market."

Excluding the storms, he said, the economy may have actually added jobs last month — marking only the second time that would have happened since the recession began in December 2007.

Brian Wesbury, chief economist at First Trust in Chicago, said forecasts of the snow's impact were based on historical data. But he noted that "when an economy is accelerating, I think the impact of the weather is smaller than if it's just cruising along."

The Labor Department said 5 million people worked fewer hours last month because of the snow. It also showed a drop in the average wor week to 33.8 hours from 33.9 the previous month, which Wesbury attributes to the weather.

Wesbury said a number of factors point to the possibility that the March employment figures that will be released next month could see a very large number of jobs added.

Far fewer census workers were added this month than many people expected, just 15,000, so next month should see a sharp increase. Hiring of temporary workers — usually a precursor to full-time employment — has steadily increased in recent months. And Wesbury said there also should be some bounceback from the weather.

"We seem to have turned the corner. The jobs data accelerate from here," he told NPR.

But there are still nearly 15 million people unemployed. About 40 percent of those have been out of work for more than half a year. If you add in those workers who have been compelled to work part time because they can't find full-time work or those who have quit looking, the unemployment rate actually rose to 16.8 percent, says Peter Morici, an economics professor at the University of Maryland.

"Jobs are a lagging indicator, not a never indicator," Morici said. "Eight months into the much touted recovery, the economy should be adding jobs, not losing jobs at a slower pace."

The House passed legislation Thursday giving companies that hire the jobless a temporary payroll tax break. But many economists doubt the measure will create a significant number of jobs.

Although the number of job losses was better than expected, "it's more than we should tolerate," President Obama said Friday.

The administration's top economist echoed that statement. "We need to achieve robust employment growth in order to recover from the terrible job losses that began over two years ago," said Christina Romer, head of the White House's Council of Economic Advisers. "That is why it is essential that Congress pass additional responsible measures to promote job creation. It is also vital that we continue to support those struggling with unemployment."

More than 6 million people are still classified as long-term unemployed — meaning they have been out of work for at least six months.

Brian Silverstein was laid off from his job as a mechanical engineer for a steel company more than a year ago. His entire department was eliminated, and none of his co-workers have been able to find work either.

"I've come to the conclusion that sending out resumes is probably pointless, because the number of resumes that I've sent out that were completely ignored is probably well over 90 percent," he told NPR.

Still, many recession-sensitive industries fared better in the jobs report than many economists had predicted. Construction lost 64,000 jobs, compared with an average of about 40,000 in the previous three months. But retail employment was flat and the leisure and hospitality industry gained 7,000 jobs, the first increase since September.

NPR's Tamara Keith and Yuki Noguchi contributed to this report, which includes material from The Associated Press