Accessibility links
Exclusive First Listen: The White Stripes Live Shedding nuance and between-song banter almost entirely, the live album Under Great White Northern Lights bursts with redlined intensity, as the Whites barrel through a decade-spanning assortment of newer songs and older fan favorites. Hear the record in its entirety here until its release on March 16. 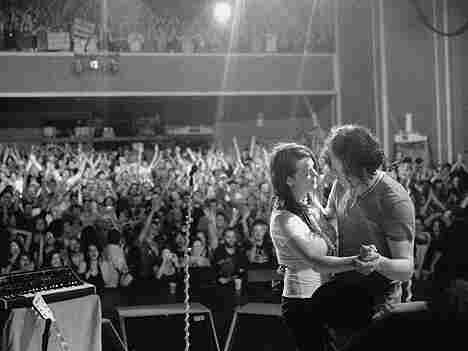 Well before Canada-philia ran rampant in conjunction with the 2010 Winter Olympics, The White Stripes made a point of hitting every single Canadian province during a 2007 tour — which meant touring everywhere from arenas to a bowling alley to a boat. The band's escapades on that tour are preserved in Emmett Malloy's new documentary, appropriately titled Under Great White Northern Lights, which captures the interactions between members Jack and Meg White as they make their way across some of the northernmost expanses of North America.

Of course, the Whites' relationship represents only one side of The White Stripes' story. Another side is built around blistering, white-knuckle performances like those documented on the no-nonsense live album which shares a name with the documentary. Shedding nuance and between-song banter almost entirely — Jack White speaks all of three nondescript sentences the whole time — Under Great White Northern Lights bursts with redlined intensity, as the Whites barrel through a decade-spanning assortment of newer songs and older fan favorites. (Of course, Dolly Parton's "Jolene" gets a workout, too.)

Drawn from a bunch of different concerts, Under Great White Northern Lights re-creates the blustery, bottom-heavy rumble of being there. There's nothing sterile about these performances: They practically beg to be blasted, and why shouldn't they? Fortunately, you can hear them all on this page until the album's release on March 16.

Please leave your thoughts on Under Great White Northern Lights in the comments section below.