Accessibility links
The Tricky Business Of Defining Genocide Condemning mass slaughter can be difficult. President Obama has broken his campaign pledge regarding use of the word genocide regarding the 1915 killing of more than 1 million Armenians by Ottoman Turks. Like other leaders, he has found that this term of condemnation carries particular risks.

The Tricky Business Of Defining Genocide

The Tricky Business Of Defining Genocide 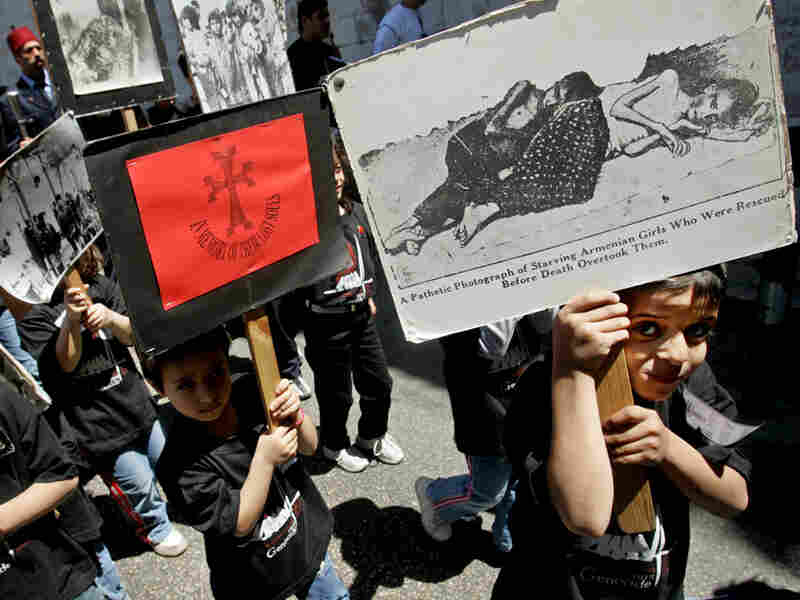 Armenian children in Jerusalem carry signs and photographs during a 2005 march to mark the 90th anniversary of the mass killing of Armenian people in 1915. Armenians accuse the Turks of genocide in the slaughter during World War I. Kevin Frayer/AP hide caption 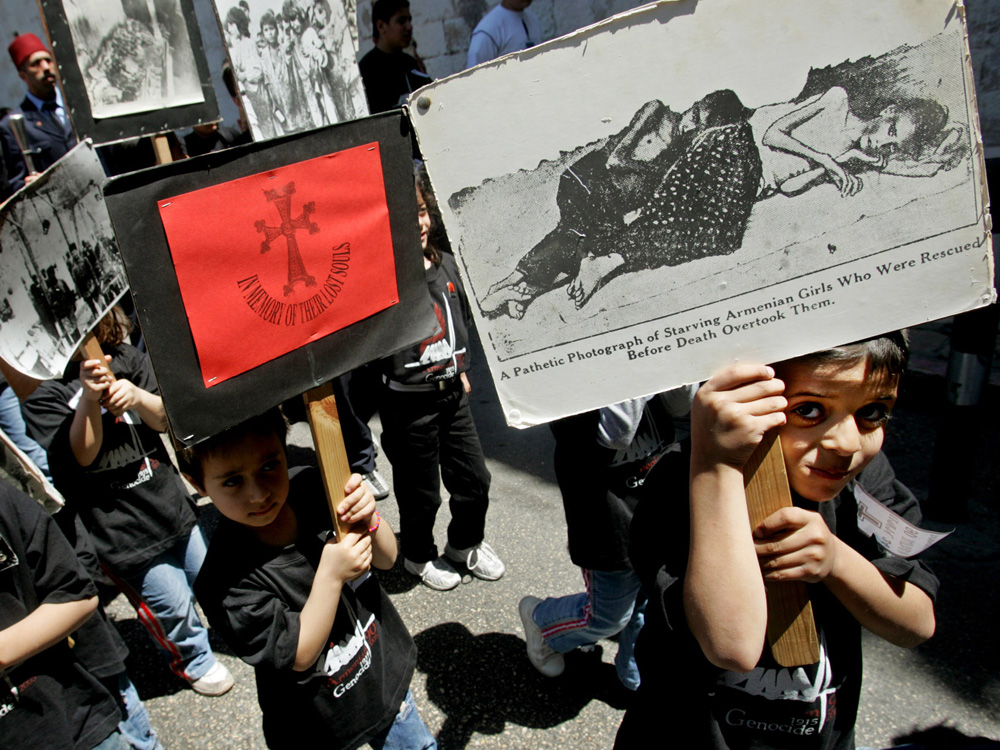 Armenian children in Jerusalem carry signs and photographs during a 2005 march to mark the 90th anniversary of the mass killing of Armenian people in 1915. Armenians accuse the Turks of genocide in the slaughter during World War I.

The term "genocide" was coined during World War II to denote a crime so terrible it could not be confused with any other. In that sense, the word may have worked too well.

The word's association with Nazi Germany and the Holocaust has presented a barrier to defining mass killings as genocide. And the lack of agreement on what constitutes genocide has led to inaction in the face of contemporary slaughters, as well as endless arguments about whether historical events qualify for the description.

The House Foreign Affairs Committee on Thursday approved a resolution recognizing the slaughter of more than 1 million Armenians by Ottoman Turks in 1915 as genocide.

Congress — along with parliaments in other nations — has regularly debated this issue in recent years, creating tensions with Turkey. Turkey's foreign minister said Friday that the House panel's vote would damage U.S.-Turkish ties.

But the Armenian debate is not the only argument over what exactly constitutes genocide. What seems to be the most straightforward political act imaginable — condemning mass slaughter — turns out to be a tricky business.

Fear of upsetting Turkey, an important NATO ally, has led President Obama to lobby against the genocide resolution. This stands in contrast to his position as a senator and presidential candidate, when he pledged to recognize the genocide. He said it was simply "a historical fact."

The reality is that the term is a great hindrance, because fixating on the term hinders our understanding both of what happens and what should happen.

In some contemporary cases, such as the 1994 mass murders in Rwanda, debate among rich nations has seemed to turn more on the semantic question of whether events technically qualify as "genocide," rather than on formulating any response.

Calling such killings genocide would force action. Member states can call on the United Nations to try to prevent genocide and are bound by treaty to stop genocide from taking place within their own borders.

"There's a legal structure out there that makes the word very powerful," says Daniel Jonah Goldhagen, author of a 2009 book about genocide, Worse Than War. "That's why there's so much debate about whether something is genocide or isn't."

Defining just what is genocide has been a point of contention ever since the word was invented. Raphael Lemkin, a Polish Jew who evaded capture by the Germans during World War II and eventually settled in the United States, created the word in a 1944 book in response to the Holocaust. He combined the Greek word genos, meaning race or tribe, with the suffix -cide, derived from the Latin word for killing.

This was more than a linguistic exercise. His neologism quickly made its way into international law with the 1948 adoption of the United Nations Convention on Genocide, which defines genocide as the attempt to destroy, in whole or in part, a national, ethnic racial or religious group.

To Lemkin's dismay, however, political compromises meant that the document did not define mass murder for political reasons as genocide. That has turned out to be an enormous loophole. In Indonesia, for example, an anti-Communist purge in 1965-66 left an estimated 500,000 people dead. Yet, because of their political nature, the massacres have not been considered genocide.

Perpetrator regimes typically argue that their intent is based on self-defense or military necessity. Perhaps surprisingly, outside nations, too, willingly enter into legalistic arguments about whether mass slaughters such as Rwanda and Darfur constitute genocide.

"The reality is that the term is a great hindrance, because fixating on the term hinders our understanding both of what happens and what should happen," Goldhagen says.

It can be an argument without end.

Charles W. Ingrao, an historian at Purdue University, notes that former combatants can sometimes agree on the facts — including mass murder and rape — but the aggressor will still not accept the opprobrium of the genocide label.

"The use of the term genocide throws a monkey wrench into what could be the smoothly working machinery of reconciliation," he says. "It has a political dimension that makes it counterproductive."

Armenians insist the 1915 killings constituted the first genocide of the 20th century. Most scholars agree. Denying it is as unimaginable, in their eyes, as a German denial of the Holocaust.

Armenians outside of Armenia seem to take a harder line on the question of the term genocide than those still living in the country.

"This denial of the genocide has become the central organizing principle among Armenians in the diaspora," says Ronald Grigor Suny, a professor of Armenian and Russian history at the University of Michigan.

Turkey has lobbied hard against foreign countries recognizing the 1915 killings as genocide.

Following Thursday's House committee vote, Turkey recalled its ambassador to the United States and has threatened to deny the U.S. use of an airbase, as well as other sanctions, during previous debates over the past decade.

Turkey has always maintained that the Armenians were not targeted for extermination and that ethnic massacres happened on both sides during World War I. Turks also say their Ottoman predecessors feared that Armenians in their midst would support invading Russians.

But feelings run deep among Armenians. Protesters of Armenian dissent showed up by the thousands in France, Lebanon and the U.S. last year as Armenian President Serzh Sargsyan essentially campaigned for diaspora support of a rapprochement between Armenia and Turkey. He was trying, unsuccessfully, to get diaspora leaders to back an accord with Turkey that established diplomatic relations and reopened the borders — but also called for a joint historical commission to examine the genocide question.

"The government of Armenia is not going to push this issue as much as they might have," Suny says. "They want to make some realistic state-to-state agreements with the Turks."