Accessibility links
Buttkiss The Black Pacu May Be Oldest Fish In New York Amid the wood paneling and vintage posters of a New York City pet store lurks Buttkiss, a giant fish who has become a neighborhood celebrity. With more than four decades behind him, some say the underwater survivor might be the oldest living fish in the city. 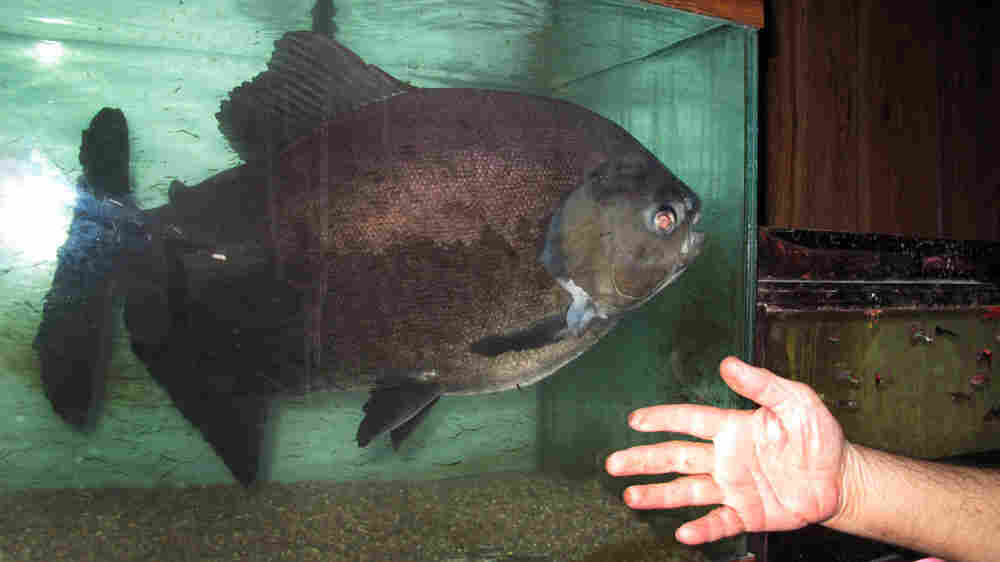 Buttkiss has been living in the same 4-foot-long, 75-gallon tank for most of his life. John Byron Kuhner hide caption 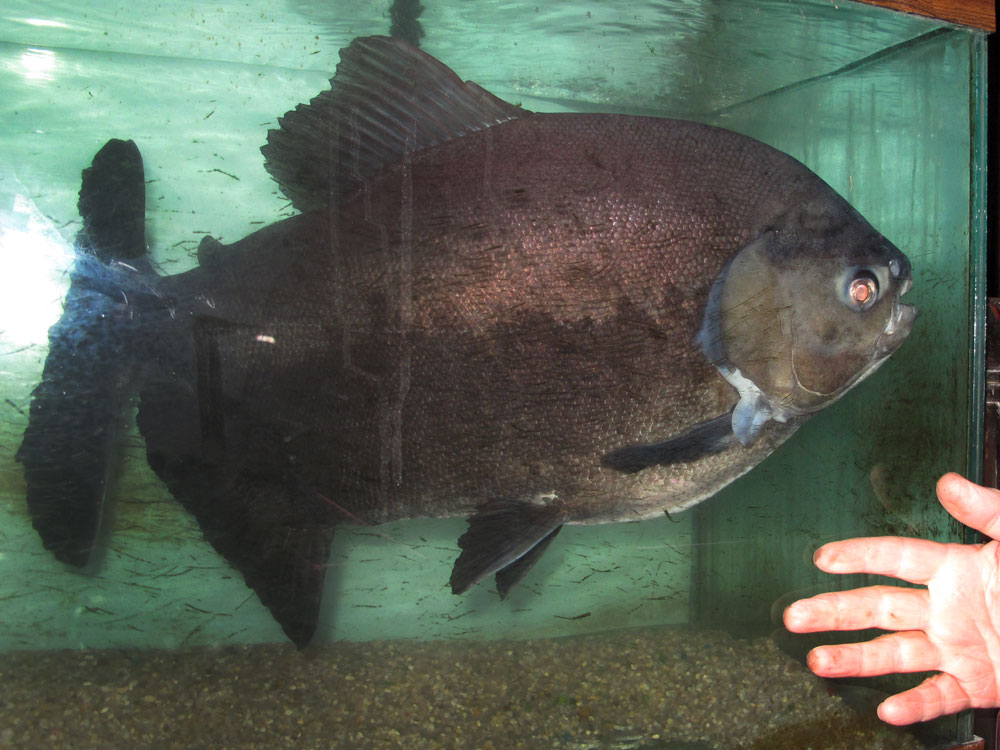 Buttkiss has been living in the same 4-foot-long, 75-gallon tank for most of his life.

Amid the wood paneling and vintage posters of a New York City pet store lurks a giant fish who has become a neighborhood celebrity. With more than four decades behind him, some say the underwater survivor might be the oldest living fish in the city.

That's Buttkiss as in football player Dick Butkus. Owner Steve Gruebel explains that the fish got his name because he was so big.

Gruebel owns the Cameo Pet Shop in New York's Richmond Hill neighborhood and has been working there for 46 years. For most of those years, he's had Buttkiss by his side.

Not only is Buttkiss huge — he weighs in at about 15 pounds and is 22 inches long — he's also really old. As far as his species goes, this fish is ancient. Already he's lived more than twice what black pacus normally do.

For Buttkiss, the view hasn't really changed in all that time. He's been living in the same 4-foot-long, 75-gallon tank for most of his life.

"I did have a few people that were a little upset that he's in such a small tank, but he's been in there for 40 years, so if I change his environment now he might not survive it," Gruebel says.

The black pacu is related to the piranha and seems to hit every ugly branch on the family tree. It's a homely fish with pointy teeth, and Buttkiss has even more problems. Over the years his gills have become deformed. His back has grown hunched, and he's developed glaucoma in his right eye. That last might be considered a blessing if it cuts his chances of catching his reflection in the tank.

But ever the proud papa, Gruebel likes to brag. "People walk in the store and they look at the fish and they go, 'Holy crap! Look at the size of that fish!' People love him."

One of the people who love him is 84-year-old Pat Polisciano, a spry World War II veteran who's not quite 5 feet tall — "but cute," he says.

Polisciano is Gruebel's longtime friend. He, too, has been a fixture at the shop for 40 years and comes in around the same time every day just to chew the fat. His favorite thing about Buttkiss is watching him eat.

"I have watched him consume thousands of goldfish," Polisciano says.

It's definitely a spectacle when Buttkiss is fed. Like any trained pet, he knows the routine. As soon as he sees Gruebel walking down the aisle toward the tank, Buttkiss jams his face into the corner of the glass and he swings his tail back and forth like a dog.

Gruebel pours 20 unsuspecting goldfish into the tank and a small crowd gathers around for the show. Buttkiss uses his mouth like a Dyson vacuum cleaner. He creates so much suction that he brings fish into his mouth from several inches away.

Within minutes he's slurped up and devoured 16 fish. This is the most excitement there's been in the store for weeks, Gruebel says, a sign of just how slow business has been. But however tight things get, Buttkiss isn't for sale.

"I wouldn't sell him. He's a member of the family now," Gruebel says. And the family is getting ready to celebrate a birthday. On April 1, Buttkiss turns 44.