Accessibility links
Culture Of Corruption Creeps Into Italian Life Ahead of regional elections later this month, Italian Prime Minister Silvio Berlusconi's right-wing coalition is facing a storm of accusations over alleged corruption. Beyond politics, many Italians report a "feeling of decay" amid a culture of fraud. An estimated one-third of Italians evade their taxes. 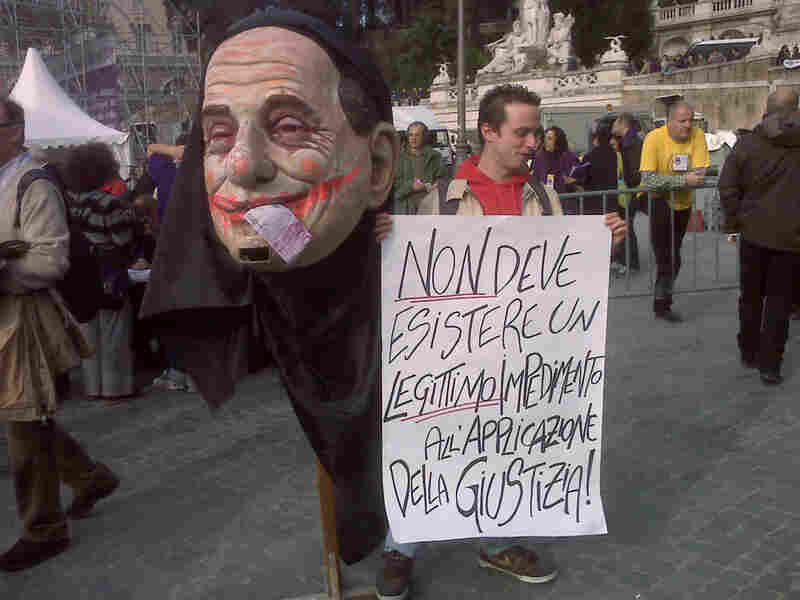 In Rome, thousands took to the streets to protest a culture of corruption that seemingly has become pervasive. This poster derides a bill being pushed by Prime Minister Silvio Berlusconi that would shield him from prosecution while in office. Sylvia Poggioli/NPR hide caption 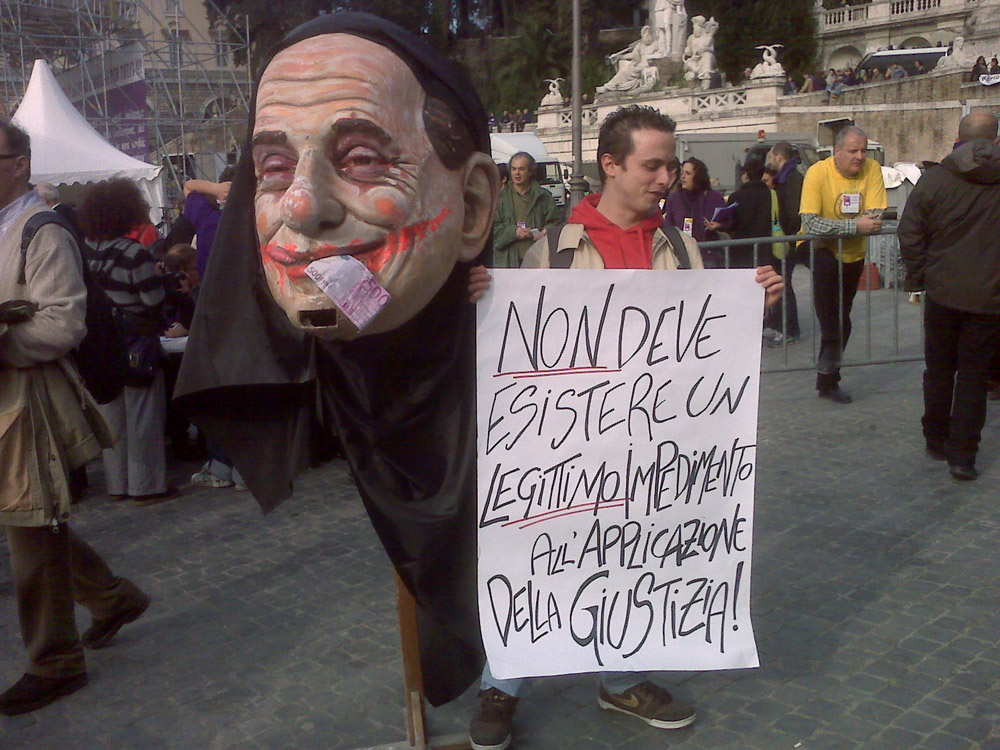 In Rome, thousands took to the streets to protest a culture of corruption that seemingly has become pervasive. This poster derides a bill being pushed by Prime Minister Silvio Berlusconi that would shield him from prosecution while in office.

As regional elections approach later this month, Italian Prime Minister Silvio Berlusconi's right-wing coalition is facing a storm of accusations over alleged corruption and sleazy behavior on the part of its public officials.

The atmosphere is reminiscent of Italy's so-called "Bribesville" scandals 20 years ago, when systemic political corruption was exposed through a major investigation. Those incidents shook the Italian political establishment and ushered media mogul Berlusconi into politics.

Last April, the central Italian town of L'Aquila was devastated by an earthquake. Eleven months later, the downtown area is still a pile of rubble. Residents left homeless by the quake recently staged a protest against unfulfilled government promises that the city would be rebuilt.

'Kick All Those Politicians In The Behind'

"Shame on you," protesters yelled. "This is just a stage set for your campaigns. We should kick all those politicians in the behind."

Anger was sparked by revelations of widespread fraud in reconstruction contracts awarded by the Civil Protection Agency, including allegations of graft and sexual favors in exchange for lucrative public works.

Several top public officials and businessmen have been arrested, and the probe has focused on Berlusconi's inner circle. The prime minister, however, has dismissed the graft as the work of a few "little rascals."

Given this situation, it’s unlikely a foreign investor has any reason to invest in our country.

Berlusconi — who faces two corruption trials of his own — is pushing bills before parliament that would shield him from prosecution while in office and sharply curb the judiciary's ability to use wiretaps.

Berlusconi On The Defensive

"We are already living in a police state," Berlusconi told supporters last week. "All our phones are tapped; our conversations are leaked to newspapers. This is a barbaric system."

He has also branded some members of the Italian judiciary as Taliban members.

Another probe also involving wiretaps exposed a money-laundering operation involving two of Italy's major telecom operators. Investigators say the alleged fraud of nearly $3 billion is one of the biggest cases of its kind in Italian history, and involved individuals from organized crime, politics and business.

The case also involves a senator from Berlusconi's party, Nicola Di Girolamo, who prosecutors say is directly linked to the Calabrian Mafia. He was pressured to resign as senator.

Prosecutor Enzo Macri says organized crime no longer lurks behind the scenes, but is now a direct political player. 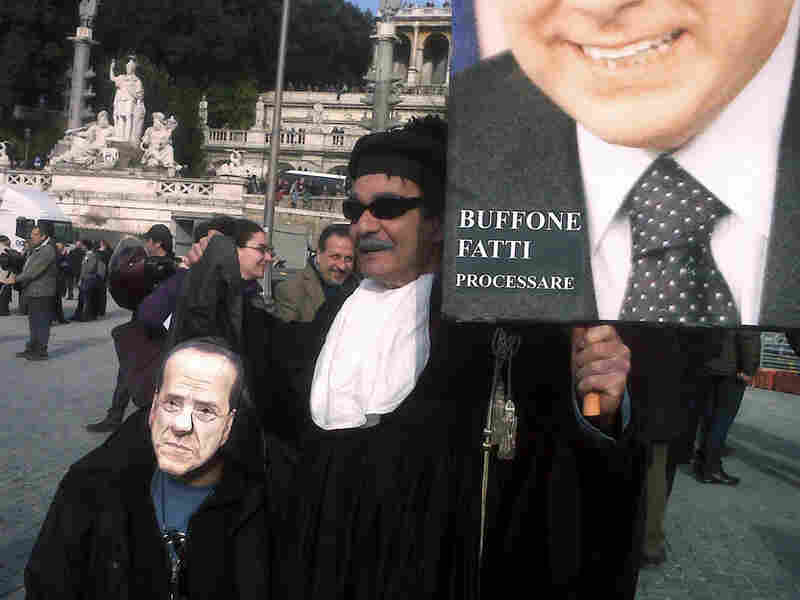 The protester to the right holds a poster calling Berlusconi a "buffoon" and prods him to show up in court. Sylvia Poggioli/NPR hide caption 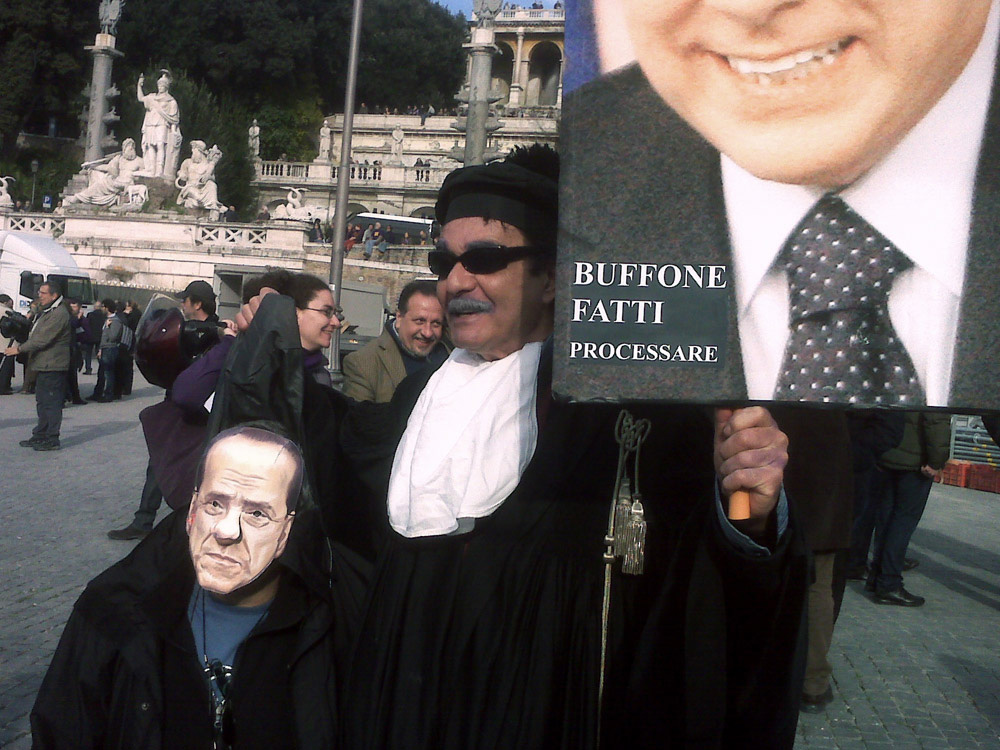 The protester to the right holds a poster calling Berlusconi a "buffoon" and prods him to show up in court.

"This is the end of a long march to conquer the heart of state institutions," Macri said. "This shows the Mafia holds sway over large portions of territory through control of electoral ballots, control of the economy and control of politics. The circle is closed."

While Italians were still reeling from these new revelations, another shock came from Italy's high audit court, which oversees and controls irregularities in public spending. It revealed that corruption cases are soaring — a 229 percent increase last year over 2008. It also showed that one-third of Italians evade taxes.

Court president Tullio Lazzaro said corruption is now an accepted part of Italian culture, and the law is no longer sufficient.

"Given this situation," Lazzaro said, "it's unlikely a foreign investor has any reason to invest in our country".

The latest corruption revelations have triggered a national debate on morality in public life. Last month, tens of thousands of people protested in Rome. The prevailing message was that Berlusconi is undermining democracy by trying to avoid his corruption trials. Many wore Berlusconi masks and striped prison uniforms.

"For young people like me, it's pretty hopeless," he said. "There are no prospects. Many of us are starting to go outside Italy and look for a job somewhere in Europe, in America, Canada, Australia. Here, it is very difficult."

Lucio Manisco, a former member of the European Parliament, says this current period is reminiscent of the round of corruption scandals two decades ago that wiped out Italy's entire political establishment. But he fears this time, many Italians see Berlusconi as an ideal role model.

"He is a classical example that people try to imitate," Manisco says. "They say if he can do whatever he wants to make money, why not us? Italy is the most corrupt country in Europe, so there is a feeling of decay of Italian society."