Accessibility links
Study Answers Question of Why Bridges Collapse Mother Nature is the prime cause, followed by cars and ships, according to a 2005 study of 503 failed bridges over an 11-year period. The researchers say floods were responsible for more than half of recent bridge failures; fewer bridges were toppled or disabled by factors such as overloading, deterioration, or design flaws. 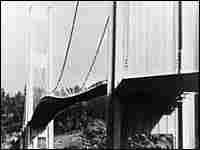 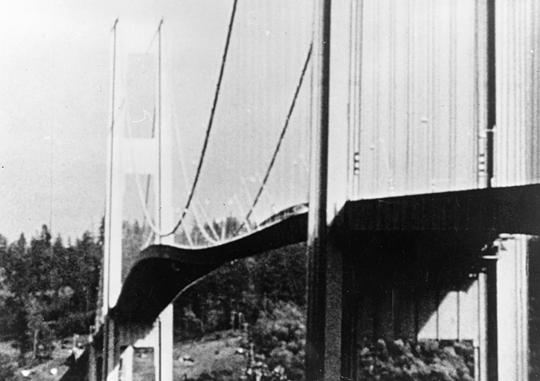 Nov. 7, 1940: The Tacoma Narrows suspension bridge in Puget Sound in Washington state vibrates violently just before its collapse due to hurricane-force winds causing a violent oscillating motion known as "flutter."

2007: A truck packed with passengers and merchandise overloads a bridge in the West Africa's Republic of Guinea, causing it to collapse, killing 65 people.

2002: A barge hits a 500-foot section of a bridge spanning the Arkansas River in Webbers Falls, causing it to collapse, killing 14 people.

2001: A bridge collapses in Lisbon, Portugal, causing a tour bus to plunge into a river, killing more than 50.

1980: The Sunshine Skyway Bridge in Tampa Bay collapses, killing 35 people. A ship hit the bridge during a storm.

1876: A railroad bridge falls into the Ashtabula River in Ohio, killing 92. The designers later commit suicide.

Mother Nature is hard on bridges.

That's the main message from scientists who conducted a massive study of why bridges fail in the United States. The researchers say floods were responsible for more than half of recent bridge failures; fewer bridges were toppled or disabled by factors such as overloading, deterioration, or design flaws.

The 2005 study by Kumalasari Wardhana and Fabian Hadipriono of Ohio State University looked at 503 U.S. bridges that had failed between 1989 and 2000. The failed bridges included everything from spans designed to carry pedestrians over roadways to floating pontoon bridges across lakes. "Failure" was defined as anything from collapse to damage so serious the bridge had to be closed.

Overall, they found that 53% of the failures came during floods, when raging waters undermine bridge footings or batter the structures with debris. The great floods of 1993 were particularly hard on bridges across the Midwest. Earthquakes brought down another 3% of the bridges.

"Overloading" took third place in the survey. Roughly 10% of the bridges failed after too many people or cars crowded on to the span. The study notes that 107 people were injured after a walkway collapsed at an auto racetrack in North Carolina.

Deterioration and design flaws – potential factors in the collapse of the Interstate 35 West bridge in Minnesota — were responsible for about 9% of the failures. Twenty bridges, for instance, failed due to corroded steel or related deterioration.

The study, which appeared in the Journal of Performance of Constructed Facilities, notes that some bridges are particularly plagued by problems.

The Evergreen Point Floating Bridge on Lake Washington, Washington had an 11-year run of bad luck. The pontoon bridge's deck cracked open in 1989, then again in 1991. Then, eight years later, strong winds split the bridge in two. In 2000, it was damaged by a collision.