Accessibility links
In Haiti, Quake's Orphans Long For A Home UNICEF estimates that more than 20,000 children lost their parents in the Jan. 12 quake and its aftermath. Relatives or neighbors are caring for many of these children. Others, such as a group of boys in a Port-au-Prince park, are fending for themselves. 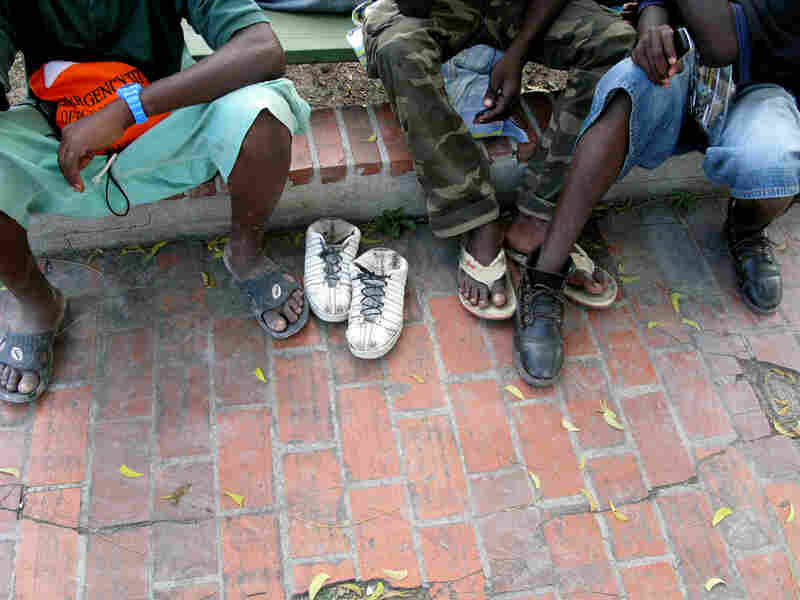 A group of teenage boys who lost their families and homes in Haiti's Jan. 12 earthquake have formed a brotherhood of sorts, and are helping one another survive. They live in a Port-au-Prince park with no shelter and no adult supervision. The boys have washed and worn the same clothes they were wearing the day of the quake. Debbie Elliott/NPR hide caption 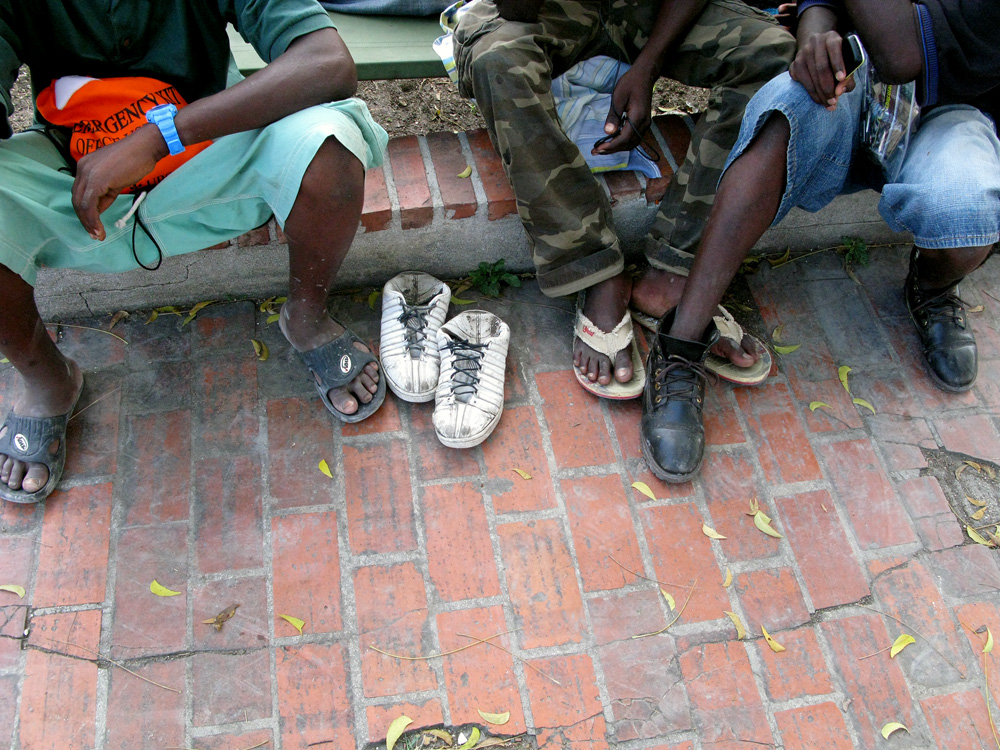 A group of teenage boys who lost their families and homes in Haiti's Jan. 12 earthquake have formed a brotherhood of sorts, and are helping one another survive. They live in a Port-au-Prince park with no shelter and no adult supervision. The boys have washed and worn the same clothes they were wearing the day of the quake.

Haiti is a country of children. Half the population is under 18 years old. And since the earthquake, it seems kids are everywhere — carrying water buckets, pushing wheelbarrows full of rubble, flying kites and playing with toy cars amid the tents that are now homes.

There also are many children who are alone, orphaned since the Jan. 12 quake that killed more than 200,000.

In a park near the airport road in Port-au-Prince, the Haitian capital, a group of teenage boys are huddled around a radio, listening to Creole rap music. They are not related, but have formed a brotherhood in the disaster. Five of them are living in the park without shelter — or adult supervision.

"After the earthquake, all of us came here to sleep," 16-year-old Luckson explains through a translator.

Their homes and neighborhoods collapsed in the earthquake. "All my family died," Luckson says.

The boys do odd jobs to earn money, like fixing cars that break down on their way to the airport. They share food and try to survive with what little they have, washing out the same clothes they've been wearing since the earthquake.

UNICEF estimates that more than 20,000 children lost their parents in the quake and its aftermath. Relatives or neighbors are caring for many of these children. Others, such as the boys in the park, are fending for themselves.

Humanitarian groups are working to track the separated children and reunite families when possible. The children's names are entered into a searchable database with information about where they used to live and whether they have relatives in the countryside.

Late on a recent Friday afternoon, a team of social workers came to register the teenage boys living the park. The workers took photographs and promised to return Monday morning to take them to an orphanage, where they would be cared for and would be able to resume their studies until caregivers can be found.

UNICEF officials say they have registered more than 300 children so far and reunited about a dozen families. It takes detective work, says Marie de la Soudiere, coordinator of UNICEF's program for separated children in Haiti.

Until caregivers are located, the agency tries to place kids temporarily in orphanages or designated child-safe tents in the spontaneous camps where earthquake victims have settled. Soudiere says there is danger in the chaos of disaster.

"You can take children [who] are lost, and nobody will even find you," says Soudiere. And you can take advantage of desperate parents "who don't know what's going to happen tomorrow, because their lack of knowledge that aid is coming ... then they just say, 'Take my child,' " she says.

Even before the earthquake, Haiti had more than 300,000 orphans. Destitute parents gave up some, and in the worst cases, handed the children over to wealthy families as servants, known as restaveks in Creole.

Since the earthquake, the government has tightened its watch on child trafficking and temporarily halted adoptions, a move supported by key humanitarian groups.

"No one has the right to take a child out of this country," says Caryl Stern, president and CEO of the U.S. Fund for UNICEF. She says good intentions don't always result in what's best for a child.

"You hear frequently in the States, especially, 'Well, but we can provide for them so much better.' Where do you draw that line then? So this summer, when it's really hot and the kids in the ghetto or neighborhoods where they don't have air conditioning, are we going to pluck those kids and take them to parents who have air conditioning because they can provide for them better?" she asks.

"No one has the right to decide where a child should be except that child's family," Stern says.

No Safety Net For Families

But some say the crackdown on adoptions is misplaced.

"In a perfect world ... I would love to see international adoption stopped," says Dixie Bickel, who runs the orphanage God's Littlest Angels, about 45 minutes outside of Port-au-Prince. "I would love to see Haitians take in and adopt a child without making it a slave in their home," she says.

Bickel is an American nurse who has lived in Haiti since 1991. There are about 60 children staying at the orphanage now, mostly infants and toddlers she has taken in from other orphanages that were destroyed by the earthquake.

Bickel is frustrated by what she sees as hostility toward orphanages like hers.

"Nobody says a thing because mothers give up their kids in the U.S., because we know they can't take care of their kids," she says. "But in Haiti, it's made to look like it's an illegal trafficking situation because the mother says, 'I would rather give up my baby than see it die in my arms.' "

Bickel says that until the cultural system in Haiti changes to support families with children, institutions like hers are crucial.

Some U.S. senators, including Louisiana Democrat Mary Landrieu, believe the influx of international aid after the earthquake provides an opportunity to build a modern child welfare system in Haiti.

"The problem is there's no safety net of support services in Haiti," Landrieu says. "And it causes many parents to want to or to be forced to or encouraged to abandon their children."

For now, UNICEF's Soudiere says her agency is trying to get emergency assistance to families in crisis.

"If it's a bit of food and a tent so be it, because it's criminal that money should be spent on a child in an orphanage, separated from the family, where a quarter of that amount of money could maintain that child at home," she says.

On Monday morning, the teenage boys living in the Port-au-Prince park are up early, backpacks on, waiting for the social workers to return for them.

"It makes me so happy that I have a chance today," sings 15-year-old Steve. He says the group wanted to get back to school so they will have a future.

But something is amiss. Two of the boys do not show up. Over the weekend, they left with foreigners offering food and money. The others didn't have details, but think they went to a hotel downtown. They are surprised their "brothers" did not return to meet the social workers.

The social workers arrive late, and with bad news. The orphanage won't take the boys because they are too old. The plan now is to give the boys a tent in one of the settlement camps throughout the city.

The smile fades from Luckson's face. He doesn't like the idea.

"We will always stay [here] until we find someone [who] is not lying so they can help us really," Luckson says.

He sits down on one of the brick garden walls that has been his home since the earthquake. In his pocket is a folded piece of notebook paper, with a poem neatly written in English: