Accessibility links
Russian Village Haunted By A Hidden Holocaust Past World War II ended more than six decades ago, but one Russian village on the Baltic Sea is still coming to terms with its role in the Holocaust. In Yantarny, Russia, then part of East Prussia, thousands of Jews were killed in 1945. Even now, some villagers are still unaware of what happened. 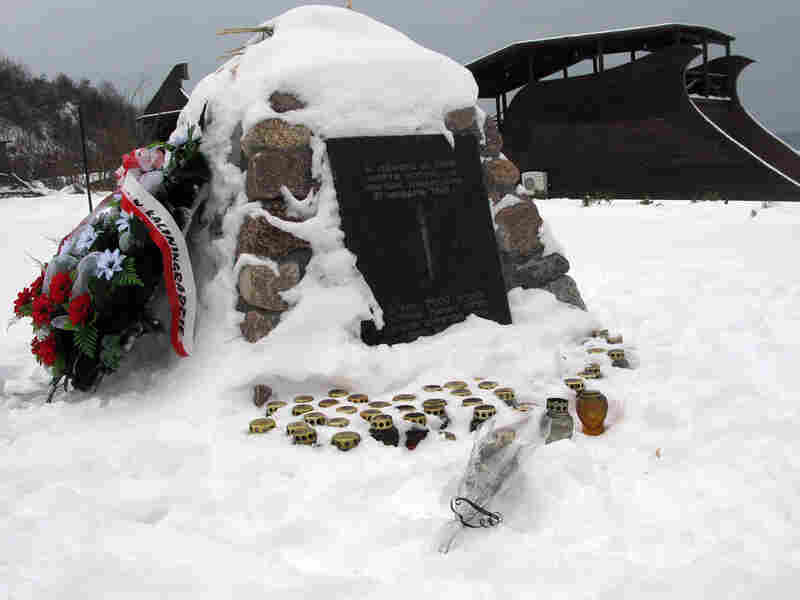 A memorial on the beach in Yantarny, Russia, where thousands of Jews were killed in January 1945. The restaurant in the background was built several years ago, over the objections of some residents. David Greene/NPR hide caption 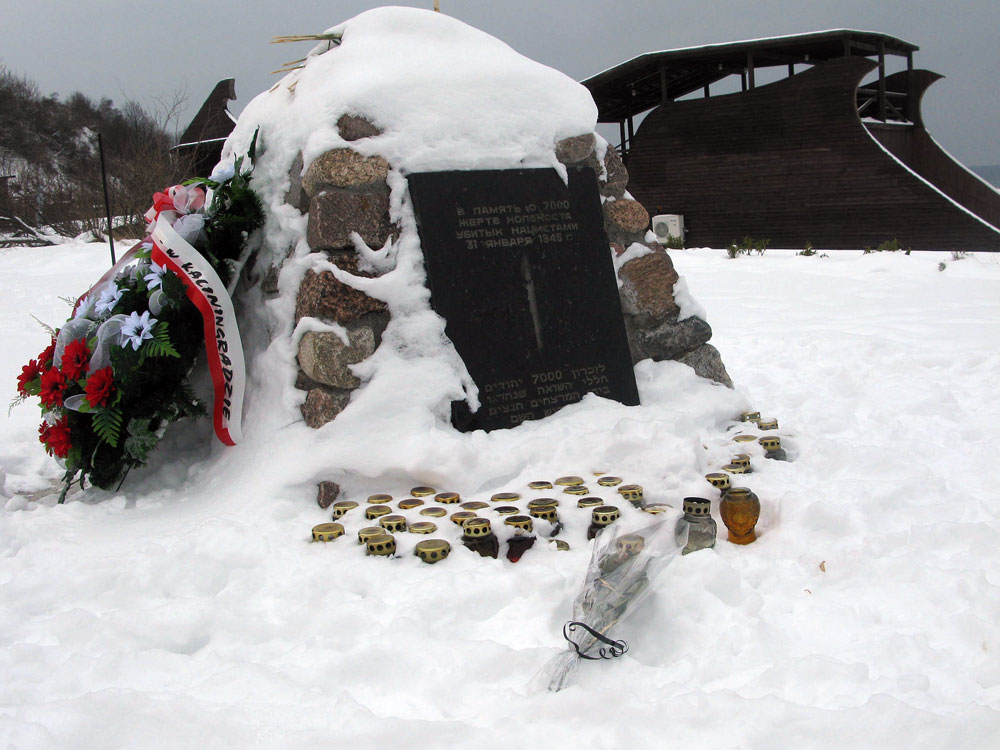 A memorial on the beach in Yantarny, Russia, where thousands of Jews were killed in January 1945. The restaurant in the background was built several years ago, over the objections of some residents.

The Holocaust memorial in the seaside Russian town of Yantarny is out of the way. A bumpy road leads down a hill, toward the chilly waters of the Baltic Sea. Climb over a rope, walk around a restaurant and there are a few stones arranged like a pyramid and, nearby, a long inscription in Russian.

The words recall a massacre on this beach in January 1945, described on the memorial as the last act of the Holocaust.

Some may debate whether it was really the last act, but what happened here did come several days after Auschwitz was liberated. The Nazis still had Jewish prisoners on the move. One death march, which began with 7,000 people, ended here in the town, then known as Palmnicken.

Frail women and children were ordered into the icy water and shot dead.

It's been more than six decades since the end of World War II, but this village in the westernmost part of Russia is still coming to terms with its role in the Holocaust.

Even 65 years later, some in Yantarny are still unaware of what happened — like Vladimir Nikolaevich, who was leaving a fishing hole near the memorial.

"What Holocaust?" he said in Russian, when asked about the beach's past. "It's unlikely there were victims here."

A German who witnessed some of the killings has written a book about the massacre. But the memorial, dedicated in 2000, became the first tangible recognition of the Holocaust anywhere in a Russian province of 1 million people.

One reason is the area's peculiar history: This Baltic coastline was East Prussia. After the war, the victorious Soviets seized the province, renamed it Kaliningrad and repopulated it with Russians. As the Germans died or left, so did their memories.

But Viktor Shapiro, a prominent voice in the Kaliningrad region's small Jewish community, points to something else.

One of the hallmarks of Soviet rule, he says, was to downplay any ethnic or religious differences among Soviet citizens. And so, to single out Jewish people as special victims of fascism, he says, would have contradicted Communist policy.

As for the memorial on the beach, Shapiro visits it often. He says he hopes it begins to teach people that the Holocaust left its mark here.

The director of a history museum in Yantarny, Lyudmila Kirpinyova, was born in the town in 1958. She remembers her parents telling her to stay away from a beach close to her house. Looking back, she says her parents — and some others in the village — may have known about what happened in 1945.

"In those days, everyone kept silent; they did not reveal anything," she says. "Even now, my husband tells me if I had a shorter tongue, I'd be of greater value. But since I couldn't speak much in the past, now is my time to speak — a lot — at last."

But only to a point. The history of East Prussia is represented in the museum, along with portraits of Vladimir Lenin and Soviet memorabilia. But it's hard to find anything about the Holocaust.

The museum director says she will never force people to confront what happened here.

"There are people who would like to speak about those events and people who don't want to speak or even think about it," Kirpinyova says. "It's not for us to judge."