Accessibility links
Combat Vet Says Gender Bias Led To Untreated PTSD According to recent VA statistics, PTSD and depression are the top disability claims among America's female veterans. But many have trouble proving they saw combat — a key to being treated for Post-Traumatic Stress Disorder. One decorated war veteran's story is emblematic of the struggle to get help. 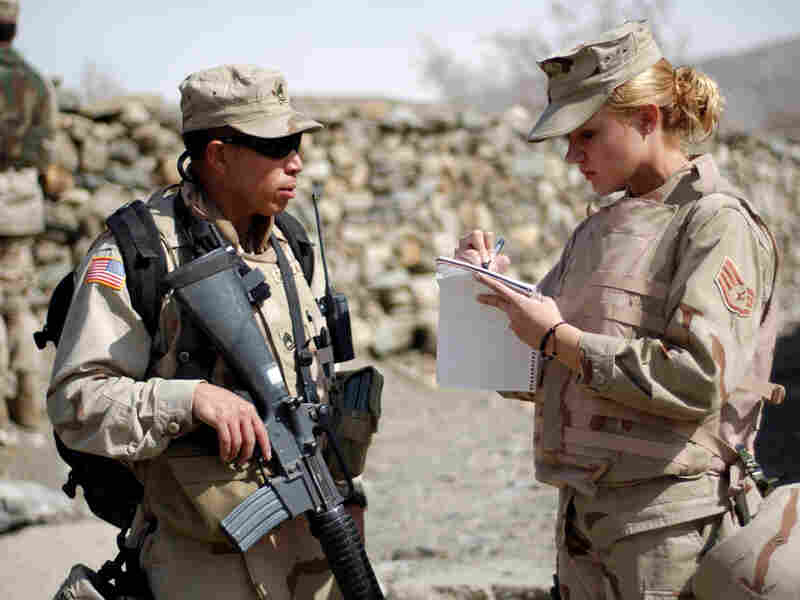 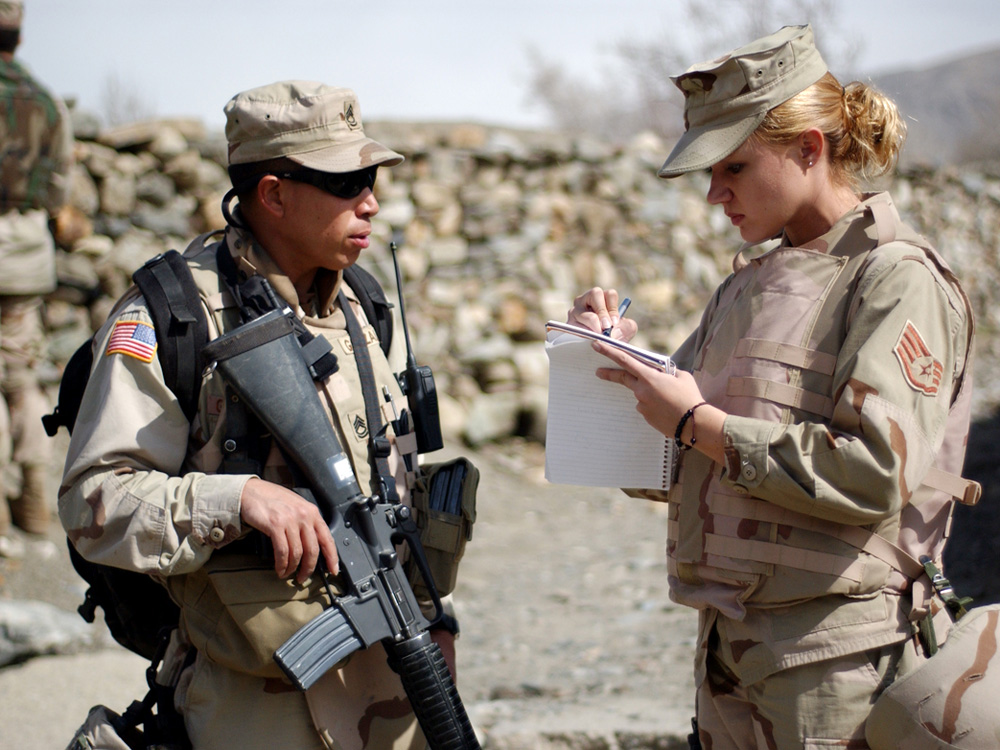 Staff Sgt. Marti Ribeiro interviews an Army sergeant while embedded with a combat unit in Afghanistan.

According to recent VA statistics, PTSD and depression are the top disability claims among America's female veterans — many of whom served in Iraq and Afghanistan. But many of them have trouble proving that they saw combat — a key to getting treatment for Post-Traumatic Stress Disorder.

A decorated war veteran, Marti Ribeiro's return to America — marked by a divorce and bouts of anxiety — highlights the struggles many female veterans face. Ribeiro, 30, spent eight years in the Air Force, achieving the rank of staff sergeant. She served tours in both Iraq and Afghanistan. Sitting for an interview recently, Ribeiro smoked a cigarette, looking both tired and nervous.

In 2006, she was embedded with the Army's 10th Mountain Division in Afghanistan as a military journalist, covering the unit's humanitarian mission. But on many occasions, Ribeiro, a slender woman with hazel eyes and blond hair, had to drop her camera and pick up her rifle.

Of the attacks on her unit, Ribeiro said, "We were hit with mortars and RPG [rocket-propelled grenades] and it ranges from IED's on our convoys to a lot of small-arms fire."

Ribeiro was awarded the Army's Combat Action Ribbon, but the medal did little to slow the mounting chaos in her life. She was getting ready to separate from the Air Force and return to her husband and young daughter in the United States when her husband filed for a divorce.

Shaken by the tension and grief of combat, Ribeiro came home to take on her new role as a single parent. She recalls being overwhelmed by stress and anxiety.

"It's like having a burning sensation in the pit of your stomach that doesn't ever go away," she said. "You become very paranoid in that sometimes you feel like people are out to get you."

Ribeiro was diagnosed with post-traumatic stress disorder by military doctors at a hospital in San Antonio, where she was stationed. She says doctors recommended she apply for benefits through the Department of Veterans Affairs. More than 40 percent of America's female veterans have enrolled in the agency's health care plan.

After being discharged, Ribeiro moved to Oklahoma City with her daughter, and her symptoms got worse. According to her VA medical records, her PTSD claim was approved — but when she tried making an appointment at the local clinic, another battle began.

She was finally evaluated by a physician and a psycho-therapist, but Ribeiro claims she was over-medicated with drugs like Xanax, that covered up her symptoms but didn't deal with the roots of her anxiety. Eventually, she found a psychiatrist who helped her.

"He got me on the right medication, the exact medication I needed to be on," Ribeiro said, "but there are two psychiatrists, that's it, for the entire Oklahoma City VA Medical Center, and I'm only allowed to see him once every six months."

Officials at the Oklahoma City VA say there are 14 psychiatrists on staff — but only one solely dedicated to PTSD issues from the wars in Iraq and Afghanistan. Ribeiro says her counselors denied her access to a group therapy program designed for combat veterans of those conflicts.

Speaking of the PTSD treatment options meant for veterans who served in Iraq and Afghanistan, Ribeiro said, "They've got sleep therapy, they've got a nightmare group therapy program — but they are sticking to their guns and they won't refer me."

When asked why that is, Ribeiro said, "You're asking the wrong person. It seems to be the only thing that's excluding me is the fact that I'm female."

Studies show that female veterans often have a hard time proving they saw combat — something that can help get a PTSD claim approved. But in Ribeiro's case, she earned a combat medal.

Dr. Dan Jones is the director of the Post-Traumatic Stress Recovery Program at the Oklahoma City VA Medical Center. He didn't comment directly on Ribeiro's case, but Jones says there are national policies that should prevent a female vet with an approved claim from being denied access to a support group.

"I can't think of a reason that she would be denied for entrance into most of these programs if she had those qualifications," Jones said.

Marti Ribeiro says she's given up on the VA's ability to provide free counseling. She's found a good therapist for herself and her daughter, through private insurance.

"It's 30 bucks a week — that's my co-pay for seeing a specialist, basically. So it can get expensive, especially between that and my daughter's counseling."

Today, Ribeiro has a full-time job, and she's found support from a committed relationship. She wants to move on from the memories of war, but she knows her life will never be the same.

"You don't want to forget. You feel guilty for wanting to forget," Ribeiro said.

"I served my country honorably for eight years. I should be proud," she says. "I've seen things and done things that a million other people haven't, and I lived through it and I'm fine, and I'm on the other side, and I'm going to get through it."