Accessibility links
States Square Off Against Amazon Over Sales Tax The Supreme Court has said that retailers can't be expected to collect sales taxes in states where they don't have a physical presence. But as states struggle with huge budget deficits, they want to collect on the billions of dollars of taxes they say online shoppers owe. 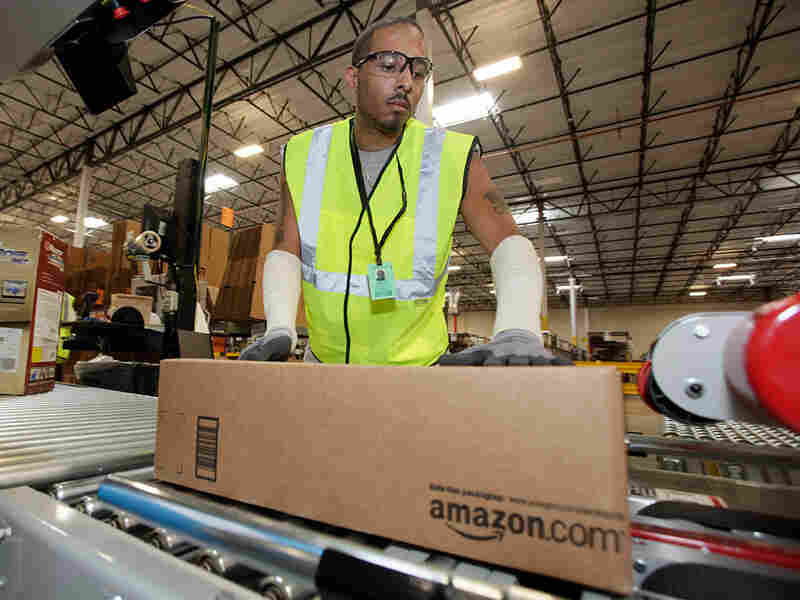 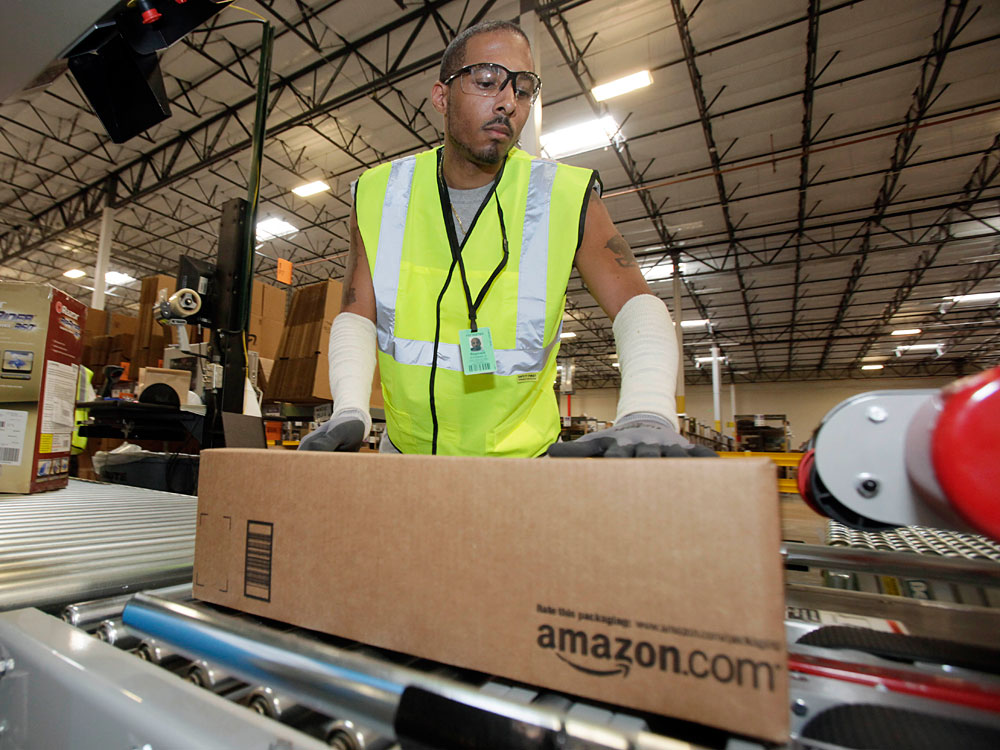 Reginal Armstead Jr. sends a package from an Amazon.com warehouse in Goodyear, Ariz., in November 2009. When consumers in some states buy items through Internet merchants, they avoid being charged state sales tax.

The last time you bought something online, there's a good chance you didn't pay sales tax.

Online retailers often don't charge the tax, but that doesn't mean you don't owe it. And as states around the country struggle with huge budget deficits, they're looking for new ways to make sure you pay it.

Zach Tomanelli — a college student, NPR intern and a big Quentin Tarantino fan — was eager to buy the filmmaker's latest DVD, so NPR sent him to the Target in Culver City, Calif., to do a little sales tax experiment.

After a quick credit card swipe, Tomanelli takes a look to see how much he's just contributed to state and local government. The California tax is 9.75 percent, or $2.44 for the $24.99 DVD, so the total amount he pays for the Inglourious Basterds special edition DVD is $27.43.

How does Amazon skip the tax? The company does not have a California address. The Supreme Court says retailers can't be expected to collect sales taxes in states where they don't have a physical presence. Since Amazon ships merchandise in from neighboring states, it can offer Californians a checkout unencumbered by the sales tax.

Neal Osten of the National Conference of State Legislatures in Washington says it's still people's responsibility to pay the sales tax, even if an online retailer leaves it off.

"A number of states right now do ask that you [pay]," Osten says. "On your income tax form, there's a line for unpaid sales taxes or uncollected sales taxes — and you can report that and pay that to the state."

But in the real world, almost nobody does. With the rise of Internet commerce, states are missing out on billions of dollars. Numbers like that get the attention of California Assemblyman Charles Calderon.

"When you're looking at double-digit billion-dollar deficits, every penny counts," Calderon says. "You can't [afford to] leave any money on the table."

Calderon is pushing what he calls the "Amazon bill." It's a whole new way of defining an online store's "physical presence" in a state. Specifically, it focuses on "affiliates" — the smaller, third-party Web sites that get a commission for linking customers to Amazon and other big online retailers. The bill focuses on the fact that many of those "affiliates" are located in California.

"It makes the finding ... that if you have affiliates, you have a physical presence," Calderon explains. "And therefore, the obligation can be imposed on you, Amazon.com, to collect our use tax for us."

This approach was actually invented by New York state, which has been using it for a couple of years now. Amazon is suing to overturn the law.

Meanwhile, Amazon's affiliated are getting dragged into the middle of the political fight over sales taxes. This week, Amazon cut ties with its affiliates in Colorado after that state passed a different kind of online sales tax law.

The affiliates are usually small businesses, and they get a lot of sympathy. One Colorado legislator called Amazon's action "blackmail." Amazon won't comment on the issue, but it referred an NPR reporter to Fred Nicely at the Council on State Taxation, a trade organization in Washington, D.C.

"What the business community really wants is for the states to remove a lot of the complexity in collecting their taxes," Nicely says.

In fact, an effort to harmonize state sales tax rules has been under way for a number of years, but it's still waiting for congressional approval. That could take awhile. In the meantime, states like Colorado, New York and possibly California are looking for ways to get their money now.