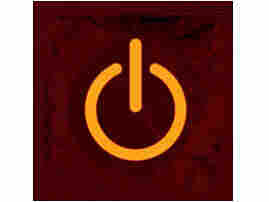 New York City has an official condom. This winning logo will grace the cover of 6 million condoms distributed in the city. nyc.gov hide caption

New Yorkers have a new sex symbol. The international sign for the power button (the circle with the line thrusting out the top) will grace the wrappers of millions of New York City condoms.

The city's health department distributes 40 million free condoms every year. But the official design was less than stimulating. Enter the Web. An online contest for a special limited edition wrapper brought out the city's more dirty-minded designers and 15,000 people voted on the finalists.

The winning "power-on" logo was thought up by Luis Acosta, a designer from Queens.

"I wanted to associate it with something we see in our daily lives so it wasn't taboo for people," Acosta said. Not that he found the power symbol arousing, or anything. "I like electronics but I don't like them that much."

"It seemed like a simpler, more chivalrous time, so I wanted to remind people of the fact that there's good manners involved in sex," he said. And if you picture your favorite little gentleman wearing a jaunty chapeau, then so much the better.

Other entries in the condom contest were more suggestive. There was the image of a manhole. Another wrapper featured a subway train plunging into a dark tunnel.

"I didn't want it to be in you face, you know," explained designer Gene Lambert. After all, there's nothing dirtier than the New York City subway system.

Acosta's power-on design will not be on all of the city's official condoms. But with a limited release of 6 million, it will likely become one of the most recognized logos in New York.

"I get to be part of 4 million people's sex lives," Acosta calculates, noting that many people will grab more than one. But not Acosta. He's married and says he doesn't use condoms anymore.