Accessibility links
Rossini's 'The Barber of Seville' The Barber of Seville may be the perfect, operatic comedy. On World of Opera it comes to us from the jewel-like theater at Glimmerglass Opera, a perfect venue for the crystalline musical textures and intimate vocal detail of Rossini's masterpiece.

Rossini's 'The Barber of Seville'

Rossini's 'The Barber of Seville'

In Act I, Figaro introduces himself with one of the most famous numbers in opera, "Largo al factotum." Here it is sung by Aaron St. Clair Nicholson at Glimmerglass.

Not long after Figaro's big moment, Rosina boldly decides to write a letter to the young man who's been serenading her, and sings the spectacular aria "Una voce poco fa." Here's mezzo-soprano Katharine Goeldner's Glimmerglass performance. 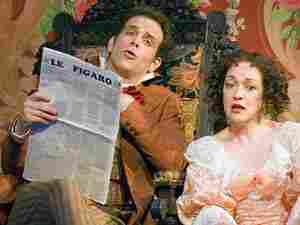 When The Barber of Seville was first performed, early in 1816, it would have been difficult to predict that Rossini's comedy would become one of the most beloved operas of all time.

For one thing, the piece would have seemed decidedly unoriginal. It was based on a famous play by Beaumarchais and another composer, Giovanni Paisiello, had already made a successful opera from the story. That one was a hit, and when Paisiello's fans heard about Rossini's new opera, they choreographed a disturbance at the premiere. The opening night performance was sloppy, and the opera's future looked bleak.

But you can't keep a good opera down, and Rossini's Barber is a lot better than just good. It quickly overshadowed Paisiello's version and before long it had spread all over Europe, with performances from London to St. Petersburg. In 1825 it became the first opera ever sung in Italian in New York City, and Rossini was arguably the most popular composer in the world.

In operatic terms, The Barber of Seville is actually a sort of prequel. Beaumarchais' original play was the first in a series of dramas. The second one was The Marriage of Figaro, the source of Mozart's great opera from the previous century. The characters in Barber continue their story in Figaro. In fact, the Barber of Rossini's opera is Figaro — pre-marriage.

Mozart's opera may have greater philosophical depth, and a more pointed social message, but it's hard to think of a more perfect operatic comedy than The Barber of Seville. And on this edition of World of Opera, host Lisa Simeone brings it to us from an ideal venue. The jewel-like theater at Glimmerglass Opera, with its snug dimensions and clean acoustics, is just the right place for the crystalline textures and intimately detailed vocals of Rossini's masterpiece.

The Story of 'The Barber of Seville' 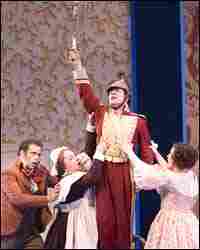 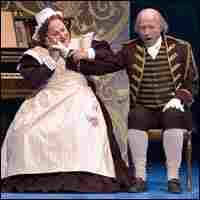 ACT ONE: After the familiar overture, we meet Count Almaviva standing outside a house in Seville, singing a serenade. He's fallen in love with a beautiful young woman named Rosina. Almaviva has trailed her home, disguised as a poor student and calling himself Lindoro — hoping she'll fall for him, and not just his title. The serenade is lovely, but it doesn't work. Rosina fails to appear.

Figaro makes a boisterous entrance, with the famous aria "Largo al factotum." He and Almaviva already know each other, and Figaro agrees to help the Count meet Rosina. Figaro tells Almaviva that Rosina is the ward of the wealthy Doctor Bartolo, and is living in Bartolo's house. Moreover, Figaro is Bartolo's barber, and can get into the house any time he wants. But there's a snag: Bartolo wants to marry Rosina himself, and keeps her under lock and key. This becomes clear when Almaviva tries another serenade. Rosina is seen briefly at a window, but someone else quickly closes the shutters.

Figaro figures that the only way Almaviva can speak with Rosina is to find a way into the house — and he has a plan. Almaviva should pose as a drunken soldier and demand housing from Bartolo.

Inside, Rosina has written a letter to 'Lindoro,' the poor but handsome suitor she's spotted outside. We hear it in the famous aria "Una voce poco fa." Bartolo hears from his friend, the music teacher Don Basilio, that a Count named Almaviva is in town, and has his eyes on Rosina. Bartolo decides he'd better marry his ward quickly, before this troublesome Count gets in the way. But Figaro overhears this, and warns Rosina. He also agrees to deliver her letter to "Lindoro," going along with the Count's deception.

Before long, Almaviva arrives in his drunken soldier disguise, enraging Bartolo by demanding housing and repeatedly mispronouncing the doctor's name. Bartolo produces an official document exempting him from mandatory billetting, and the Count protests — loudly. Figaro shows up again and the commotion draws the police, who threaten to arrest Almaviva. When he quietly produces some identification, they back off in a hurry. Bartolo is outraged. Nobody but Figaro understands why the cops are treating the "drunken soldier" with kid gloves, and the first act ends in confusion.

ACT TWO: Count Almaviva is about to try another scheme to weasle his way into Doctor Bartolo's home. This time, Almaviva has disguised himself as Don Alonso, a music teacher. Claiming to be a student of Bartolo's friend Basilio, he says because Basilio himself is ill and that he's come in Basilio's place, to give Rosina her lesson. Bartolo is skeptical. But the Count wins him over by producing the letter, written to "Lindoro" by Rosina, and saying they can use it to convince Rosina that the young man she wrote to is simply trying to use her. Bartolo falls for this, and the music lesson begins.

Meanwhile, Figaro shows up to give Bartolo a shave and a haircut. When Bartolo sends him to fetch the shaving gear, Figaro also steals the key to Rosina's balcony door. Then he knocks over a stack of dishes, making a ruckus that brings Bartolo to investigate. This leaves Rosina and Almaviva alone to declare their love.

Basilio, the real music teacher, arrives and threatens to foil the whole plan. But with Figaro's help, the lovers convince him that he really is sick and had best save his energy, and go home. Almaviva pays him off, just for good measure, and Basilio leaves. Almaviva and Rosina agree to elope at midnight, using the stolen key, and Almaviva sneaks out.

But Basilio returns, and Bartolo finds out that Rosina has just had a music lesson from a phony teacher. He's not sure exactly what's going on, but decides to marry Rosina immediately. First he sends Basilio off to fetch a notary. Then Bartolo shows Rosina the letter she wrote to the guy she knows as Lindoro, the poor student. Bartolo tells her it was given to him by a Count named Almaviva — who is using Lindoro to get to her. Rosina still doesn't realize that Lindoro actually is Count Almaviva. Devastated, she agrees to marry Bartolo, if only to get even with Lindoro and the conniving Count.

With Rosina alone in her room, Figaro and Almaviva climb a ladder to her balcony, as planned, and open the door. Calling Almaviva "Lindoro," Rosina throws his letter at him and accuses him of trying to sell her to the Count. But when Almaviva reveals his identity, all is forgiven. Figaro tells them there's no time to waste, and tries to hurry them out of the house. But they can't leave yet — there's a love duet to sing! By the time they've finished, Bartolo has removed the ladder, and they're trapped.

Just then, Basilio rushes into the room with the notary — while Bartolo is fetching the police to get his household back under control. Figaro immediately tells the notary to marry Almaviva and Rosina. When Almaviva produces a nice roll of cash — and a pistol — Basilio agrees to act as witness, and the ceremony is performed. When Bartolo turns up with the police in tow, it's too late. With no options left, Bartolo blesses the newlyweds and everyone wishes them a long and happy marriage.