Accessibility links
Crackdown On Taliban Shifts U.S.-Pakistan Ties The U.S. relationship with Pakistan has been bolstered by successful intelligence operations. But skepticism persists over whether Pakistan really intends to pursue Afghan militants on its soil. U.S. officials cite a positive change in mood, but both sides are wary about overpromising what this new cooperation can deliver. 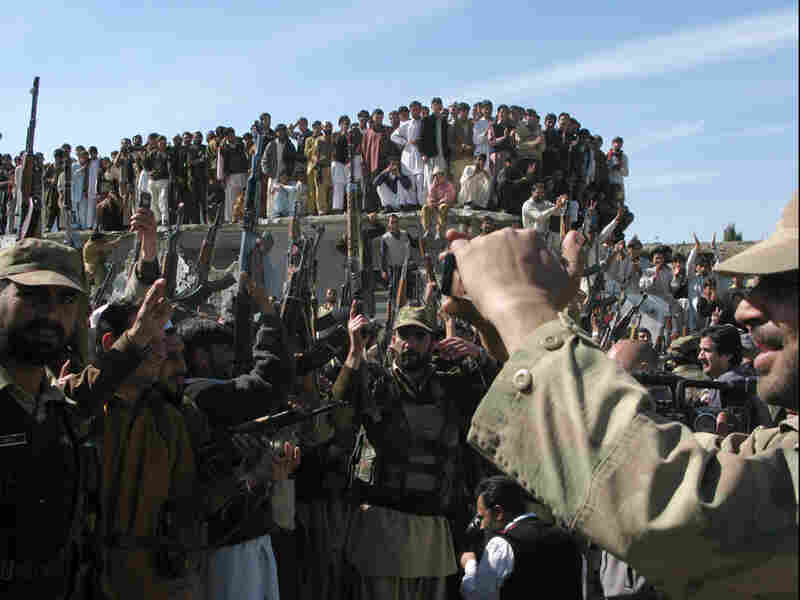 Militia members brandish weapons while dancing in a show of force in Khar, the main town in the tribal enclave of Bajaur, which lies in Pakistan's tribal area along the Afghan border. The men had gathered to show their numbers during a media trip organized by the Pakistani army. The army routed militants from Bajaur in fierce fighting that left some 75 militants dead. It's the latest Pakistani offensive that has been lauded by the United States. Julie McCarthy/NPR hide caption 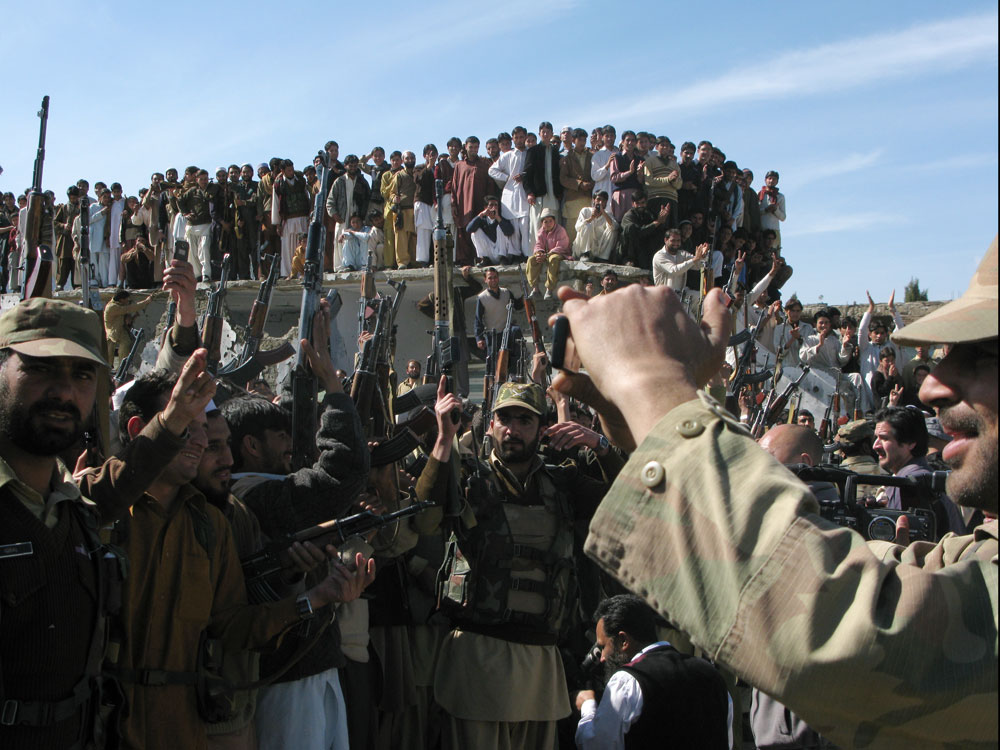 Militia members brandish weapons while dancing in a show of force in Khar, the main town in the tribal enclave of Bajaur, which lies in Pakistan's tribal area along the Afghan border. The men had gathered to show their numbers during a media trip organized by the Pakistani army. The army routed militants from Bajaur in fierce fighting that left some 75 militants dead. It's the latest Pakistani offensive that has been lauded by the United States.

A series of Pakistani army offensives against domestic militants and a string of arrests of senior Afghan Taliban members signal a new understanding between Pakistan and the United States.

As Pakistan accelerates action against extremists, Washington has reciprocated with stepped up delivery of military hardware and praise for the Pakistani government.

For years, Pakistan denied that senior members of the Afghan Taliban were on its territory. But those denials were cast aside last month when Pakistani and American intelligence agents arrested Mullah Baradar, the Afghan Taliban's deputy leader, in a joint raid in the Pakistani port of Karachi.

Pakistan helped create the Taliban and facilitated its rise to power in Afghanistan in the turbulent years after the withdrawal of Soviet forces in 1989.

"I think Pakistan has realized that it cannot continue to support militants [and] at the same time be an ally with the United States. I think there is a shift taking place. It is a gradual shift, but the realization is there. I think we have to understand that," Masood adds.

A senior Pakistani intelligence official confirmed that the CIA and Pakistan's intelligence agency, the ISI, have conducted 63 joint operations in the past year. They often travel in the same vehicle to pick up their quarry, and sit "behind the same glass" when interrogating suspects.

Newspaper editor Najam Sethi says Pakistan has grasped that the Afghan Taliban is not separate from the Pakistan Taliban, with whom the country is at war.

We are in a race for the fate of Pakistan.

"The Pakistanis now have come around to the fact that this is a seamless network in many ways. And the CIA is doing its job of intelligence, and the Pakistanis are doing their job of physical nabbing," Sethi adds.

But Moeed Yusuf, South Asia adviser at the U.S. Institute of Peace, does not see the recent string of arrests as a strategic shift. Pakistan reportedly fears being excluded from any talks with the Afghan Taliban to end the fighting in Afghanistan.

Yusuf says Pakistan helped capture the Afghan Taliban's second in command, Mullah Baradar, to stay relevant and to ensure a place for itself at the table when the parties explore a negotiated end to the Afghan war.

"This was a very clear message from the Pakistani establishment to the U.S. as well as to the Afghan Taliban that, 'We are going to be the main interlocutors,' " Yusuf says. "Pakistan, because of its own paranoia that it may be left out, will continue to signal this off and on."

The Pakistanis show no sign of handing Mullah Baradar over to the Americans or the Afghan government, though a Pakistani intelligence source said the Americans have "equal access" to the key Taliban commander for interrogation.

High Marks From The U.S.

Whatever differences exist over the handling of the Afghan Taliban, American officials give high marks to Pakistan's campaign against its homegrown Taliban.

The Pakistani army has been busily sweeping militants from their strongholds in the treacherous tribal belt along the Afghan border. 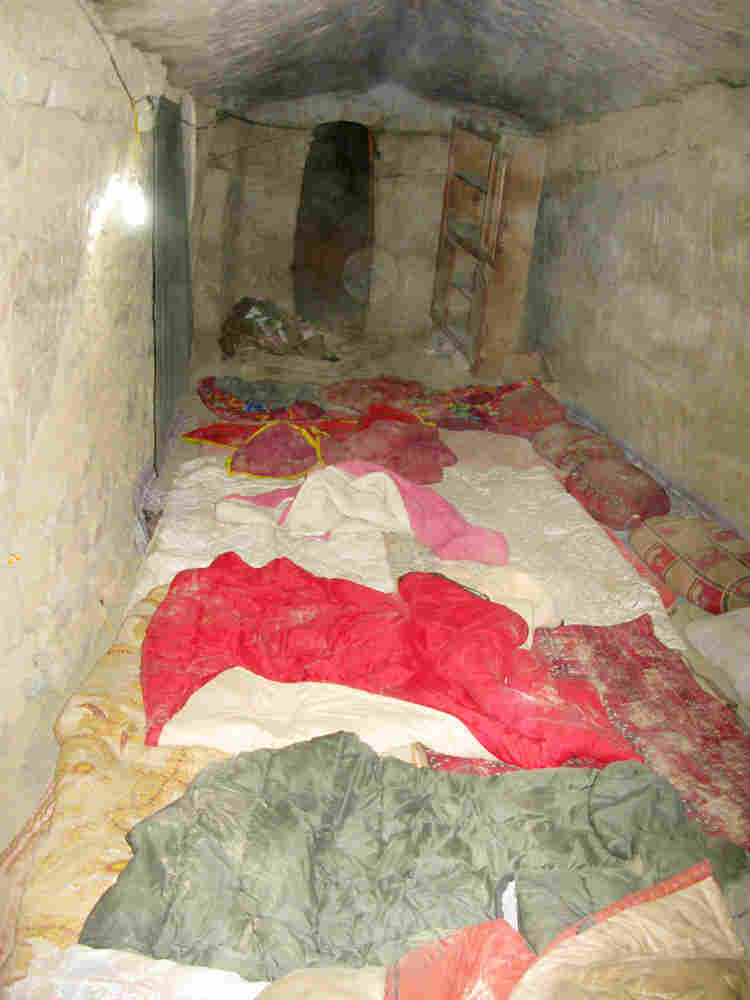 Damadola in Bajaur had been considered a Taliban bulwark for almost seven years. Pakistani security forces discovered a honeycomb of caves that provided safe haven for an assortment of extremists that was at one time believed to have included al-Qaida. Julie McCarthy/NPR hide caption

This past week in Bajaur, the smallest of Pakistan's seven tribal districts, a civilian militia of 1,000 men brandished guns and sang songs to celebrate the defeat of the Taliban there.

Pakistan's army unearthed a honeycomb of caves there that the top brass described as a nerve center for the Taliban, and a one-time haven for al-Qaida. It attracted an assortment of extremists, who launched attacks against Pakistani targets as well as NATO troops next door.

Pointing to a strategic ridge just beside a beautiful snowcapped peak, Pakistan's paramilitary Frontier Corps Chief Gen. Tariq Khan says his forces recently seized the area after a fierce battle. They planted the green crescent flag of Pakistan over the hills that foreign and local militants once controlled.

"This is the conduit that they used to travel in and out," Kahn says. "They had occupied the ridges. There were 156 caves designed as a defensive complex." Now, his men control the high ground in Bajaur.

Pakistan Takes Ownership Of The War

Samina Ahmed of the International Crisis Group says the Pakistani military leadership has deftly reframed the war on extremists — replacing the American mantra of "do more" with their own rhetoric: "This is our war, this is not just yours. This has not been thrust upon us. We are willing to do this for our own sake."

And Ahmed says the U.S. officials beating a path to army headquarters here come away impressed with the military's performance beating back the Pakistani Taliban.

"They all leaving saying great job! No longer just words. It's action on the ground," Ahmed says.

But Ahmed says Pakistan's relations with other militant commanders remain intact. "While there's been some action taken on some Taliban groups, there hasn't been action taken against the Kashmir-based, the India-based jihadis, some Afghan insurgents as well, such as the Haqqani network."

Operating from Pakistan, Sirajuddin Haqqani and his network of Afghan insurgents attack U.S. and NATO troops across the border. The CIA believes Haqqani had a role in the killing of seven Americans in eastern Afghanistan in December.

A Pakistani intelligence source said, "We'll get him when his time comes."

Masood says Pakistan must act on its own timetable. "It is already overstretched, so it has to really calibrate its response to American pressure."

Amir Sultan Tarar is a former Pakistan intelligence officer with a devotion to Allah and the Afghan Taliban. Also known as Colonel Imam, he played a prominent role in recruiting and training resistance fighters during the Soviet occupation of Afghanistan. His views reflect a deep distrust of the U.S. that has long run through Pakistan's military, the intelligence services and the Pakistani people.

"We have been treated as a subjugated nation," he says. "We have no free will, please understand that. But this is not the way."

He says Pakistan has little choice but to get in line with the U.S. demand for more cooperation in the battle against the Taliban.

"Telling us to do more — what a wisdom," he says. "You do more, you make more enemies. We are doing the wrong thing on the American behest, just to please them."

Pakistan is now going after its former allies. To accommodate Pakistan, the U.S. is easing Pakistani concerns about India and providing long-sought F-16 jets and billions of dollars in development aid.

It is costly, but in the words of one American official, "We are in a race for the fate of Pakistan."