Accessibility links
As Lice Grow Treatment-Resistant, Drug Could Help Lice in children have been treated for years with lotions, creams and shampoos. But the little critters are becoming more and more resistant. Now an oral drug already used to treat certain parasites in people appears to kill lice as well. Researchers say it could be an alternative when standard treatments fail. 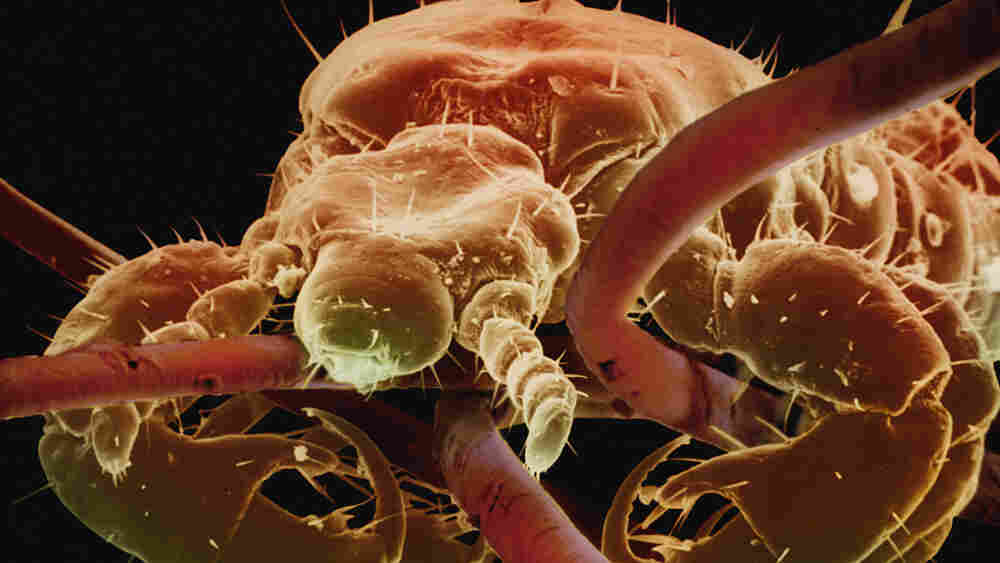 After being treated with shampoos and lotions containing insecticides for many years, some lice have become resistant to treatment. Dr. David Phillips/Corbis hide caption

Head lice in children have been treated for years with lotions, creams and shampoos. But, like other microscopic bugs, lice are becoming resistant to treatments. Now, in a study in the New England Journal of Medicine, researchers report an oral medication may be an alternative when standard treatments fail to fight off the recalcitrant bugs.

Dr. Barb Frankowski is a pediatrician in Burlington, Vt., who helped write lice treatment guidelines for the American Academy of Pediatrics. The adult louse, she says, is about the size of a sesame seed. "If you look at it under a microscope it looks like a little insect. You can see its mouth and little legs and if you're that good, you can actually tell whether it's a male or a female."

The eggs that hatch, called nits, are extremely sturdy, she says. They stick to the hair shaft sort of like glue. Like mosquitoes, lice survive by sucking blood. They are drawn only to human blood, and they don't like cats, dogs or inanimate objects.

"They say the head lice have been around since prehistoric times; they found head lice in mummies, Egyptian mummies!" says Frankowski. And they're still here, because, like most bugs, they evolve faster than the substances developed to kill them, she says.

Because of concern about increasing resistance to treatment, researchers from Europe looked at a powerful oral medication that is now used to treat certain parasites in people, as well as worms in horses and dogs. Dermatologist Olivier Chosidow headed the study with patients who had difficult-to-treat lice that weren't eradicated with topical treatments. He compared the oral anti-parasitic drug ivermectin, which attacks the central nervous system of the louse, with the prescription lotion malathion.

A New Purpose For A Known Drug

Chosidow and colleagues found that ivermectin was 10 percent more effective than malathion. The drug was 95 percent successful in ridding the patient of lice, compared with 85 percent for patients using the malathion lotion. He says ivermectin works because when the lice attach to the hair shaft and bite into the scalp, they suck up microscopic amounts of blood that carries the toxic insecticide.

Patients used the drug once to kill off the lice and then about a week later to kill off any eggs. This is also how topical shampoos, cream rinses and lotions are used.

Pediatrician Cindy Devore works in upstate New York, where she helps schools treat children with lice. She calls the findings promising but urges caution. "What we don't want to do is to jump in immediately using a very good, potentially stronger and more effective treatment, when a lesser drug might do the same job," she says.

"We don't want to bring out the big guns because we do not want head lice to develop resistance to ivermectin."

Ivermectin has not been approved by the FDA to treat head lice. European researchers agree with Devore that if the drug is used in the United States, it should be used only after shampoos, cream rinses and prescription lotions have failed.

And, even though the study found no serious side effects, some health experts worry that because ivermectin works by destroying the nervous system of lice, it could be potentially harmful to people.

J. Marshall Clark is professor of toxicology and environmental chemistry in the Department of Veterinary and Animal Science at the University of Massachusetts. "Ivermectin is actually a very potent toxin on the nervous system if it gets there," he says. "If the blood-brain barrier is compromised, ivermectin does get to the brain. I am one toxicologist that would never approve the ingestion of any insecticide by children for the treatment of human head lice."