Accessibility links
Man And Machines: Pat Metheny's Orchestrion Among music composers, there's always been a desire to hear their works performed exactly as conceived. One distinguished jazz guitarist acted on that impulse: He built his own collection of computer-controlled acoustic instruments. 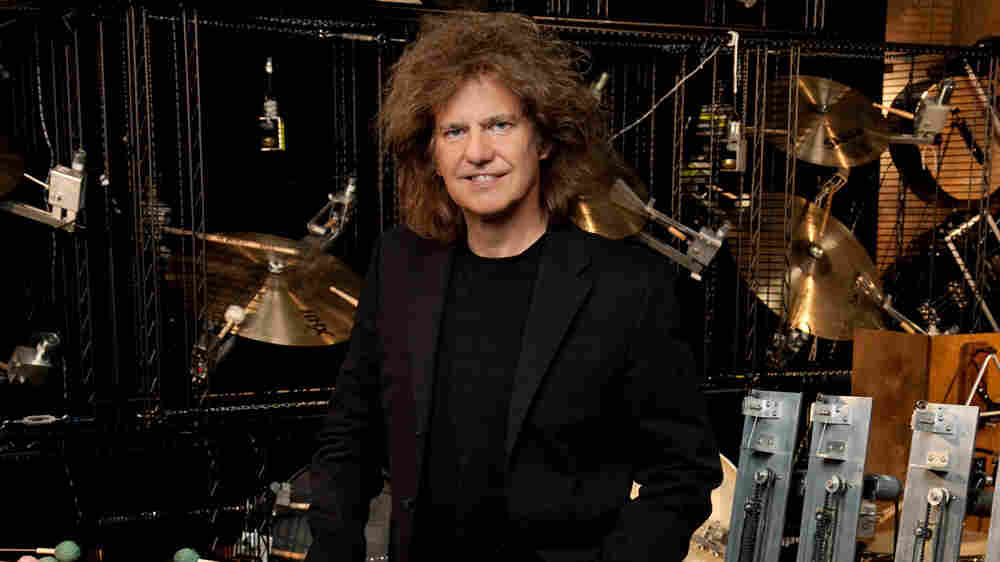 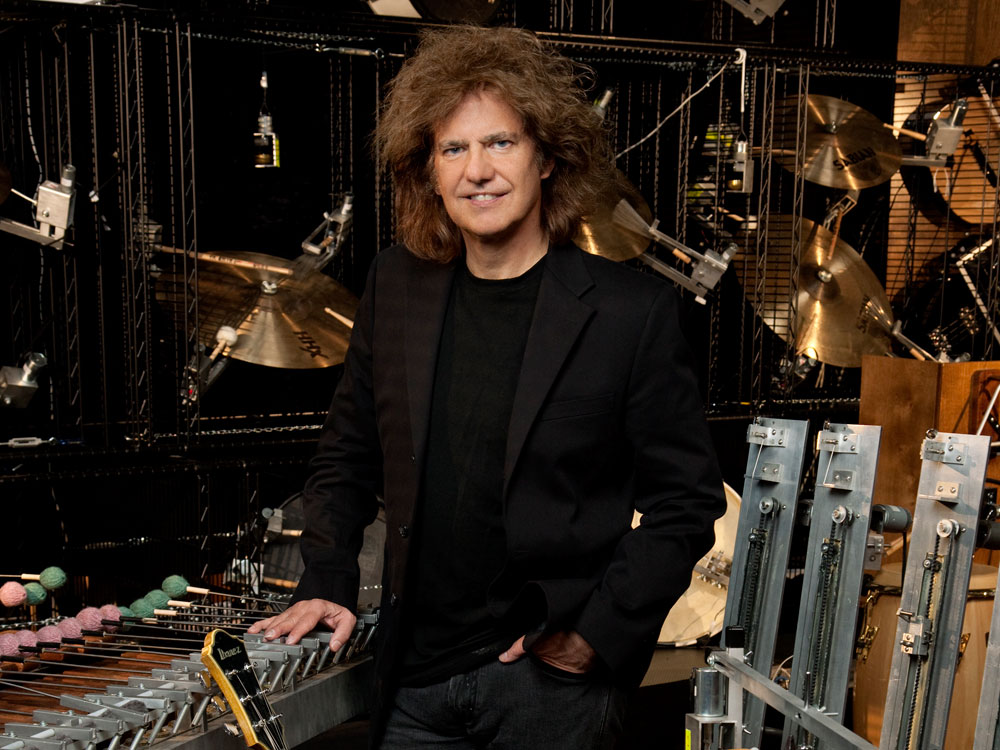 Pat Metheny is currently touring the U.S. for two months with his orchestrion.

Spirit Of The Air

Among music composers, there's always been a desire to hear their works performed exactly as conceived. It's an impulse that helped popularize the player piano 100 years ago, synthesizers in the 1960s and digital software today.

Jazz guitarist Pat Metheny recently revived the idea of automated instruments to perform a new series of compositions. He calls it an orchestrion -- a collection of real, self-playing acoustic instruments.

He's recorded an album with it and is taking it on the road, playing his guitar while his computer triggers a full range of acoustic instruments at the same time. There's no studio trickery, no overdubs.

"It's an odd combination, because everything is me," Metheny says. "Every little bit of it, from the compositions to the way the ride cymbal is played, is filtered through my sense of things. It's absolutely the most personal thing I've ever done."

"It" is Metheny's 21st-century variation on the orchestrion -- an instrument that dates back to the turn of the last century.

Metheny pulls out a book. 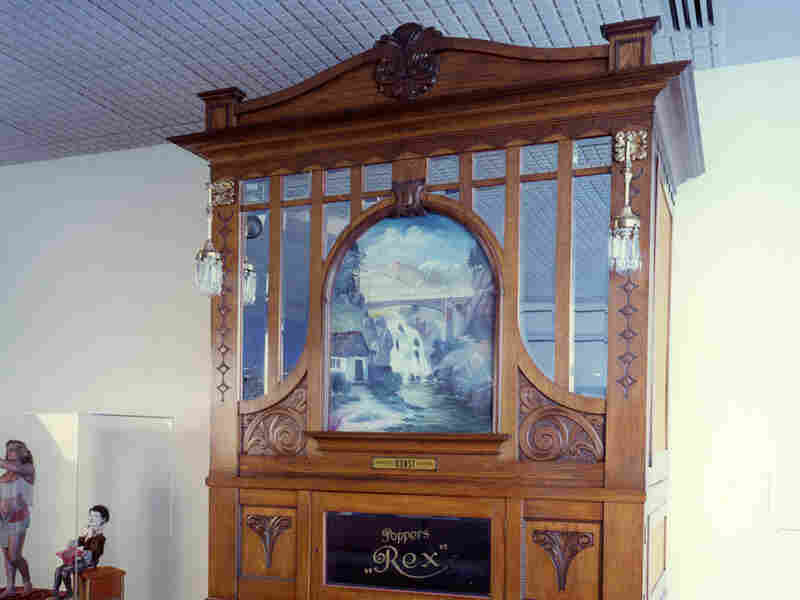 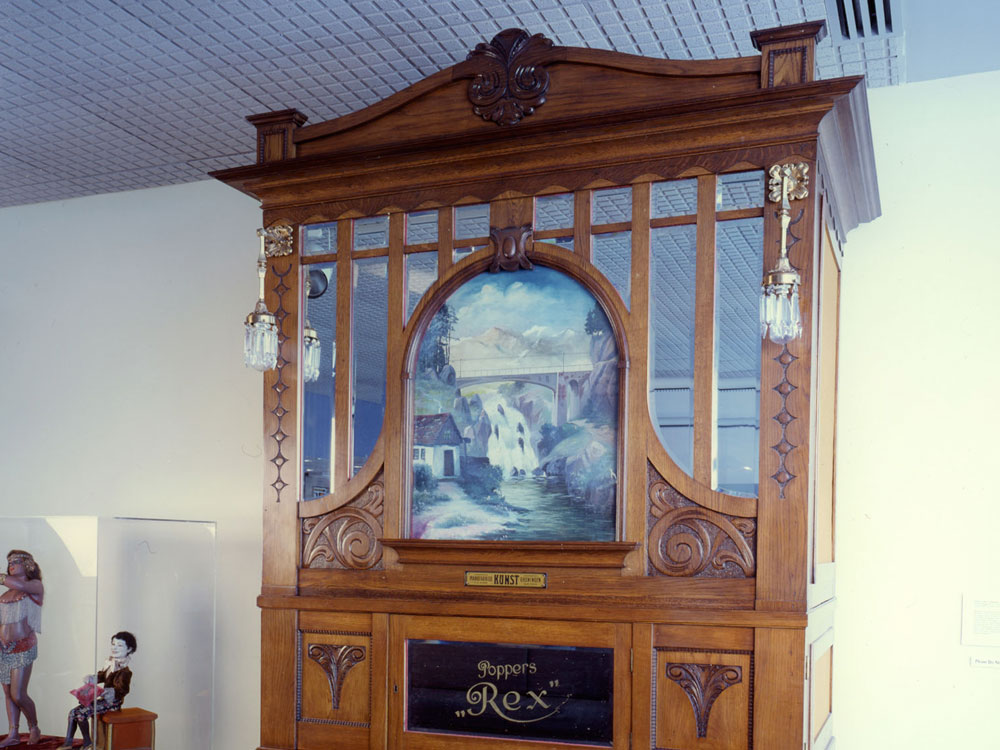 The Popper's "Rex" Orchestrion at the Morris Museum in Morristown, N.J.

Courtesy of The Morris Museum

It actually looks very different from Metheny's orchestrion, but many of the parts are there.

At the Morris Museum in Morristown, N.J., conservator Jeremie Ryder cranks up the Popper's Rex, an orchestrion built in 1913 in Leipzig, Germany.

"There's a full piano inside a keyboard-less piano that doesn't have a keyboard, so you can't play it," Ryder says. "There's also just under 100 organ pipes of different varieties to create different flavors and textures of sounds. There's also a full wooden bar xylophone inside of it. There's a set of orchestra bells that's similar to a glockenspiel inside of it, as well as a bass drum, snare drum, crash cymbal and triangle."

Not that far off from Metheny's conception of the instrument.

"It's not synthesizers, it's not samples; it's actual physical, living, breathing, smacking and getting-hit-around stuff," he says. "A whole ensemble of stuff that I can then write for and improvise with. And that's essentially what the Orchestrion Project is."

In a small former church in Brooklyn, Metheny rehearses his orchestrion -- working out the technical kinks, fine-tuning the music he composed for it.

Seeing the orchestrion in action is like watching Santa's workshop, if Santa were a jazz cat. In addition to two pianos, two robotic guitars, a vibraphone, drums and bells, a mechanism blows air across the top of liquid-filled jugs. They're all linked by wires to an Apple hard drive. Metheny triggers some instruments into action while he plays the guitar; many sequences are pre-programmed.

"I mean, you can't help but sort of laugh when you see it all going," Metheny says.

It took Metheny four years to create his orchestrion. For it, he employed the help of experts in the fields of robotics and solenoids -- electromagnetic triggers that can move a drumstick or shake a tambourine.

"This is easily the most expensive undertaking I've ever attempted, and I'll be really happy to break even on this one," he says. "It's not cheap -- we're into the six figures, we can say that."

Metheny's Orchestrion Project is both an album -- just released -- and a concert tour of Europe and the U.S. Performing with the orchestrion is a primary motivation behind the endeavor.

"We've been able to make records by ourselves for many years," he says. "They were kind of dead-end ways, though, because you couldn't do that live. ... It was a studio experience. This, I can go out and do that live."

Exploring musical styles and new technologies is nothing new to Metheny.

"I mean, I often joke my first musical act was to plug it in," he says.

In the 1980s, he caused more than a little controversy playing jazz on a guitar synthesizer. How the orchestrion will be received by critics remains to be seen -- the jazz world is not known for being especially warm to technological innovations.

"I've always felt a big part of my job is to irritate those people," Metheny says. "When I'm not doing that, I feel like I'm not doing my job."

The jazz world has mostly come to terms with electronic instruments and digital technology. If there's anything about Metheny's orchestrion that might raise eyebrows, it's the lack of human interaction -- an essential element of jazz performance.

"Because I'm a jazz guy, there's going to be this question of interactivity and blah blah blah," he says. "The thing is, with this, I've created a world for myself where I can interact with dozens of different things a dozen different ways."

Most listeners probably won't know that they're hearing automated instruments on Metheny's new album. But when they see it in concert, they'll know.

"I expect it to be a character-building experience when things don't work," he says. "Which is going to happen -- I mean, we're talking about hundreds of moving parts here. One night, that one isn't going to work, I know it. And when that happens, solo guitar, baby!"

Pat Metheny: A 35-Year Romance With New And Traditional Technology

For 35 years, guitarist Pat Metheny has been one of the very few jazz headliners to achieve mainstream success while holding on to the respect of his peers. He's worked with a wide range of musical legends, including Ornette Coleman, Herbie Hancock, Joni Mitchell and David Bowie, and won 17 Grammys leading a wide variety of his own bands.

He's also known as a musician who has never been shy about exploring an unusually diverse variety of electronic and acoustic instruments. Metheny is quick to point out that to him, music has always been about the what, not the how.

"For me, music is music," he says. "And honestly, whether you develop it using a billion-dollar system that's super high-tech, or your kid's $10 guitar, good notes are good notes; a good idea is a good idea. In terms of the show-and-tell factor, I've never really gone for that."

Though his latest recording, Orchestrion, is essentially a take on the one-man band, Metheny maintains that his priority is still natural sound and interaction.

"I've certainly been involved with electronic music and have a deep relationship to electricity, let's say, but there's an undeniable power of what happens with air, with acoustic sound moving through the air," he says. "This is a maximum amount of me moving the air around, this record. I still love the power of acoustic instruments above anything else."

Here are three examples of Metheny's penchant for balancing technical innovation with a modern jazz sensibility. 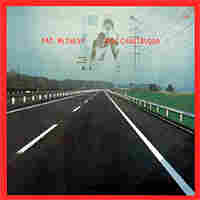 Orchestrion stands as the latest of Pat Metheny's solo recordings -- five albums to date. Until Orchestrion, he employed modern studio techniques, primarily overdubbing, to record various parts, then layer them together. "New Chautauqua," with its sunny, almost Nashville flavor, is the title track to his earliest solo effort; the album on the whole is more contemplative and atmospheric than this tune suggests. 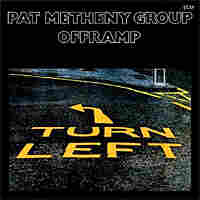 Are You Going With Me?

Are You Going with Me?

As the 1980s opened, the popularity of the Pat Metheny Group -- featuring keyboardist/composer Lyle Mays, among others -- rose high, as did the hopes of many looking for a new hero steeped in jazz. While his playing revealed influences from guitarists like Wes Montgomery and Jim Hall, Metheny's groundbreaking use of the Roland GR300 Guitar Synthesizer left many purists and critics cold. Like other jazz innovators of the past -- Miles Davis, for one -- Metheny stirred up controversy with his electronics while opening the door to a new generation of listeners on career-defining albums like Offramp. 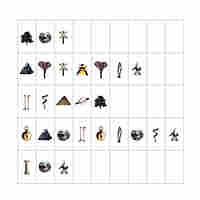 As forward-looking as Metheny is with electronics and digital technology, he can be equally focused on traditional instruments -- ask anyone who's caught him live in the past 10 years or so. One of the most unusual sights in his musical arsenal is the three-necked, 42-string "Pikasso guitar" that harkens back to harp-guitar hybrids of old. "Into the Dream" -- from a 1997 album that explores world folk styles from as far away as Indonesia and Iran -- showcases the custom-built acoustic instrument.