Accessibility links
Electric Vehicles May Energize Elkhart's Future Elkhart, Ind., is known as the RV-making capital of the world. The mayor wants to claim a new title: the electric vehicle capital of the world. Stimulus grants and other incentives are attracting companies planning to build electric vehicles to Elkhart. It's hoped the new business will fill the void created by a serious slump in recreational vehicle sales. 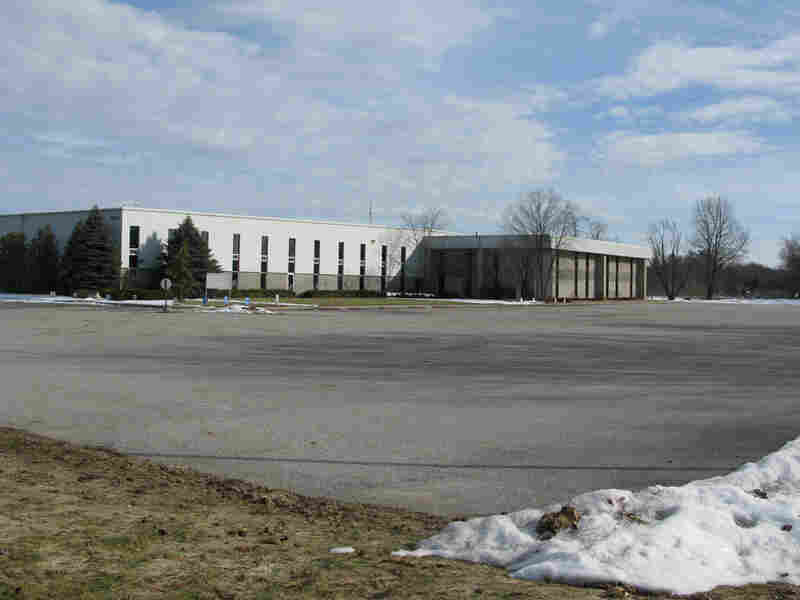 The exterior of the empty Phillips Industries plant in Elkhart, where city and state officials recently welcomed the electric car company Think, which plans to assemble electric cars in this plant and eventually hire more than 400 workers. Davis Schaper/NPR hide caption 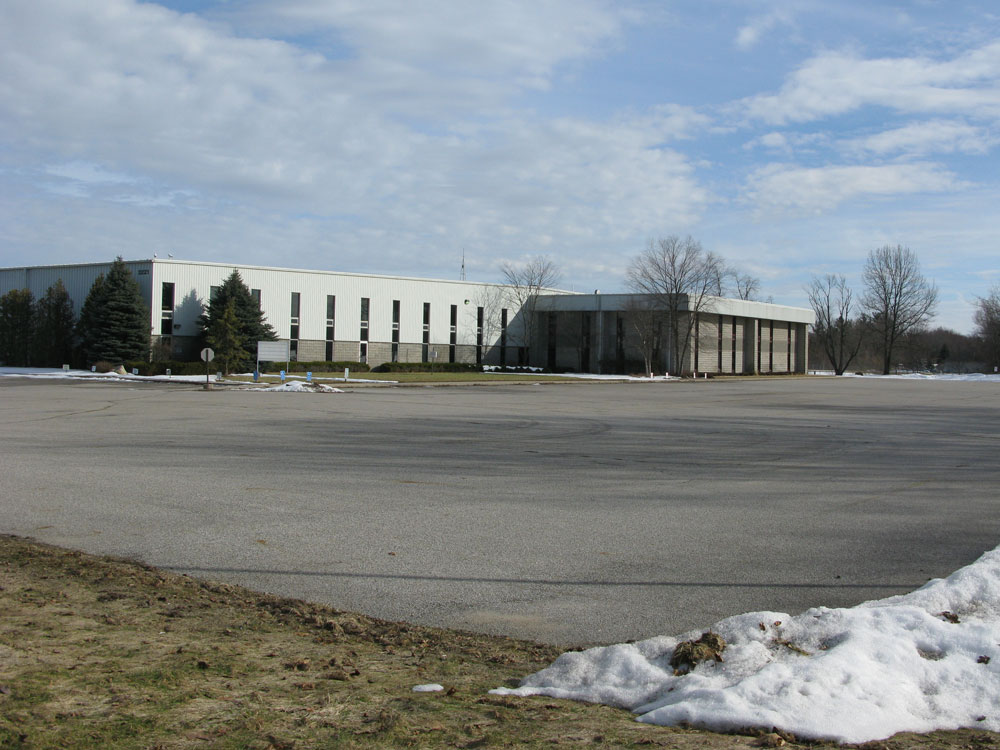 The exterior of the empty Phillips Industries plant in Elkhart, where city and state officials recently welcomed the electric car company Think, which plans to assemble electric cars in this plant and eventually hire more than 400 workers.

A year ago, Elkhart, Ind., had the highest unemployment rate in the country — near 20 percent. President Obama highlighted Elkhart's troubles, visiting twice last year to push his economic stimulus programs.

There are some tentative signs of recovery in Elkhart, though unemployment still hovers around 15 percent. The city is trying to shift its economy away from gas-guzzling RVs, and hopes to begin rolling electric vehicles off its assembly lines soon.

Cindy Eby looks over the vast emptiness of what used to be the busy factory floor at Phillips Industries in Elkhart. Everyone she knew is gone, all the equipment is gone — everything except the electric and hydraulic cords hanging from the ceiling that were plugged into the factory's machinery.

"I had seen it empty before we moved into it, and now I'm seeing it empty at the end, too," says Eby, who spent 21 years at Phillips. She worked her way up to production supervisor in the plant that made windows and doors primarily for recreational vehicles, mobile homes and manufactured housing.

Phillips Industries closed the plant and six others last August and is no longer in business.

Eby says the plant's closure was heartbreaking, and finding work in or around Elkhart is next to impossible. More than half of the area's economy is based on manufacturing, and half of that, or 25 percent of overall economic output in Elkhart County, is related to the production of recreational vehicles.

The RV industry was among the first and hardest hit when gas prices soared in the summer of 2008, and the global economy began to crumble. 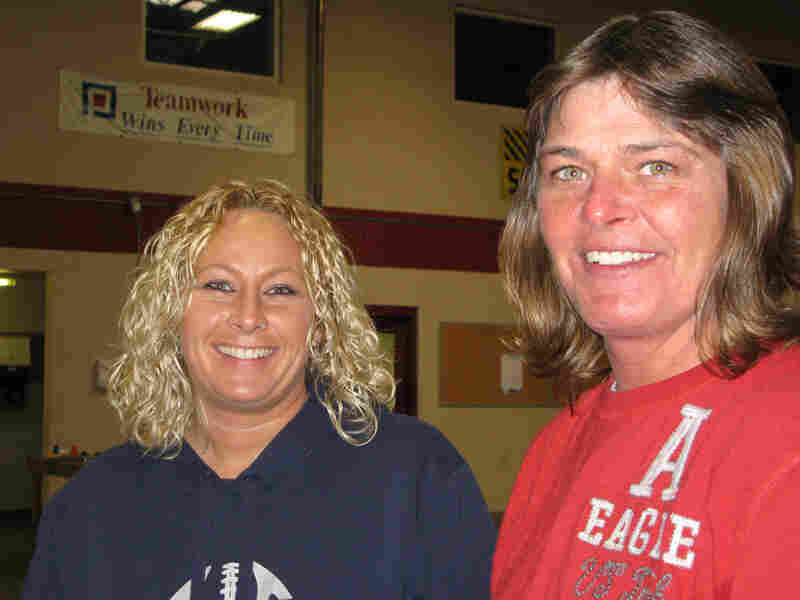 Cindy Eby (right) and Jennifer Lakin (left), former production managers for Phillips Industries, look over the empty plant floor where they worked for years. They hope to be hired on to help assemble electric cars for the Norwegian manufacturer Think. David Schaper/NPR hide caption 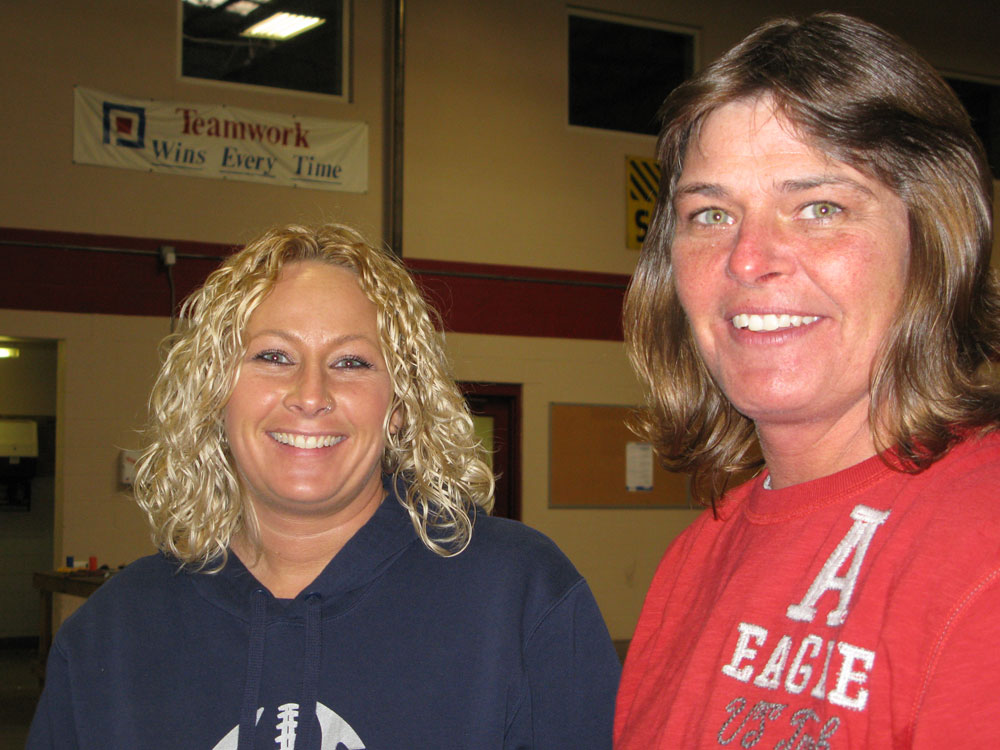 Cindy Eby (right) and Jennifer Lakin (left), former production managers for Phillips Industries, look over the empty plant floor where they worked for years. They hope to be hired on to help assemble electric cars for the Norwegian manufacturer Think.

Unemployment in Elkhart County peaked at 18.9 percent in March of last year. There has been a small uptick in RV orders recently, and some employers have begun bringing some workers back, but unemployment remains near 15 percent.

The Norwegian electric vehicle manufacturer Think announced in January it will locate its first North American assembly plant in the Philips building. By this time next year, the company says, it will be rolling a small electric car called the Think City off the assembly line.

Production won't begin until late this year or early next year. The company hasn't even begun hiring yet and won't for a while, but that hasn't stopped Eby and Lakin, who recently helped Think clear out the building and prepare old machinery to be sold at auction.

"These poor guys, they're bombarded with our resumes constantly," says Lakin, who hopes to be hired by Think. She and Eby say they've both submitted resumes to Think "several times."

Think company officials say initially they'll hire about 100 workers, but they plan to hire 415 people to staff the plant by 2013.

"They're talking about 415 employees in that plant, and I see a thousand," says Dick Moore, Elkhart's mayor.

Though many Americans have yet to embrace tiny electric cars that take all night to recharge, Moore believes that as battery technology improves and prices come down, Think's electric cars, made in Elkhart, will really sell. 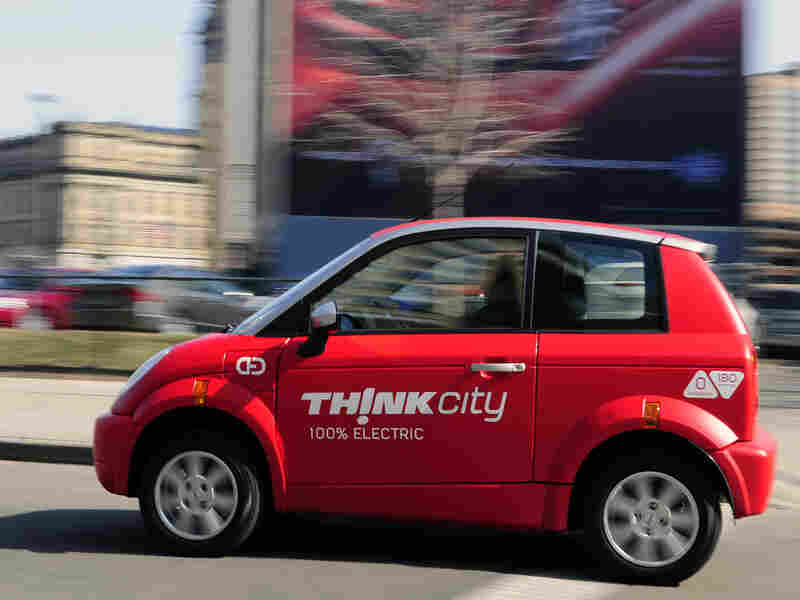 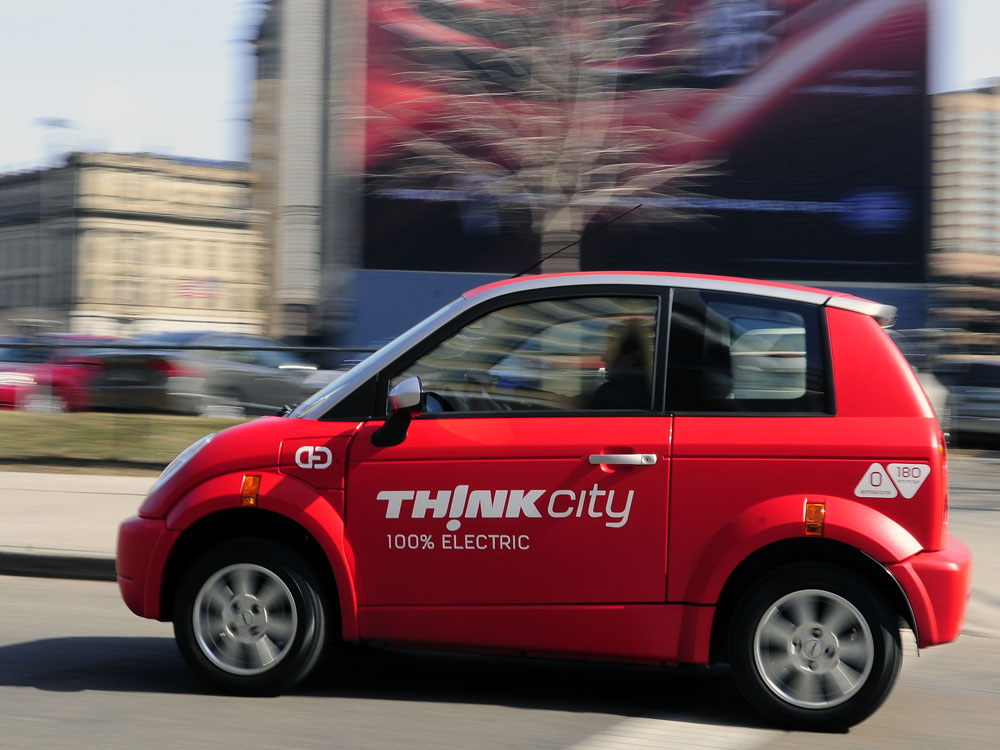 The assembly of the Think City car could employ up to 415 new workers in the coming years at the once abandoned Phillips Industries plant.

And Think isn't the only manufacturer of electric vehicles in Elkhart. Navistar is set to begin production of an all-electric delivery truck, possibly within the next month. And other companies are talking about producing electric vehicles and their parts in or around Elkhart.

"I really believe we could become, this area at least, could become the electric vehicle capital of the world," Moore says.

That's quite a goal in what is still known as the RV manufacturing capital of the world.

The mayor credits the notoriety created by having the highest unemployment rate in the country, and the president's visits, for attracting new businesses and sparking the new electric vehicle buzz.

Local and state officials are going all out, offering tax breaks and incentives, in addition to the federal stimulus grants and financing available to those developing green technologies.

Among Elkhart's selling points are those that made the RV industry flourish — its location, a ready and well-trained workforce and hundreds of small manufacturers eager to supply parts to those two-seater electric cars.

"We've been devastated to say the least," says George Thomas, CEO of Dual Form, which makes plastic parts that are mostly RV-related. "It's been crushing — our business was down 60 to 80 percent."

Thomas says he had to lay off 120 of his 200 employees. He recently was able to bring some back because of a slight increase in the RV business. He has diversified by bidding to be a major supplier to electric cars.

"If Think comes on, it'll be a fantastic boost for us," Thomas says. "We'll add another shift."

But for some in Elkhart, there are too many "ifs" associated with electric vehicles.

"I really don't think this electric car is going to take off very good," says Glen DeYong, who works in an RV plant. He has been laid off a few times in the past couple of years but says the work is more steady now.

DeYong says his faith remains in the RV industry because he doubts electric cars will sell. He points to the price tag, which Think officials say will be around $30,000, compared with a compact like the Ford Focus, which sells for around $13,000.

And DeYong says if the demand isn't there, electric vehicles won't bring Elkhart anything near the actual number of jobs that have been promised. He points out that few, if any, electric car-making jobs have been created yet.

But in a city where nearly one in six are still out of work, many say electric vehicles seem to hold more promise than almost anything else.