Accessibility links
Foreign Policy: Biden's Broken Gift From Jerusalem Vice President Biden came to Israel to talk about Iran and it seemed by early that both sides were willing to resume negotiations. But a few hours after Biden arrived in Jerusalem, Israel's Interior Ministry announced plans to build in a neighborhood sure to cause Palestinian tension. 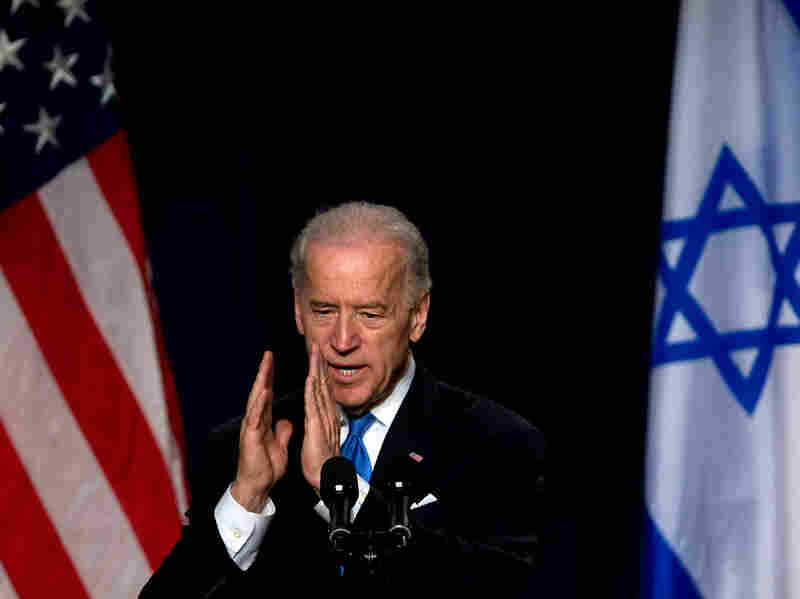 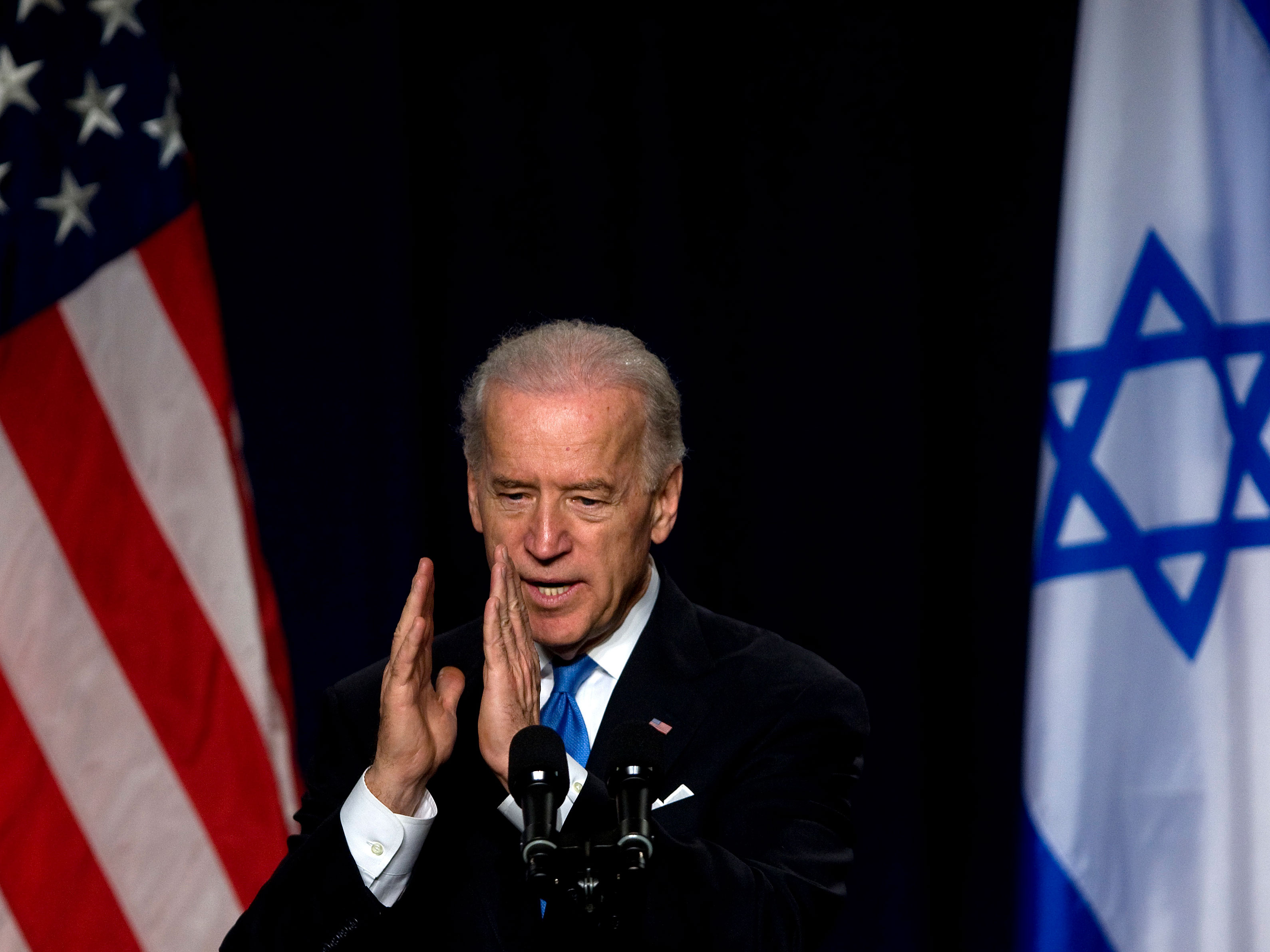 Benjamin Netanyahu accidentally broke the glass on Tuesday, but that was just the beginning — and only the lesser Israeli disaster in a day that marked a new low point for Netanyahu's rocky relationship with the current U.S. administration. The Israeli prime minister's team prepared a symbolic gift for visiting U.S. Vice President Joe Biden: a framed document announcing that several trees were planted in Jerusalem in memory of Biden's mother, a loyal supporter of Israel. But Netanyahu leaned on the present by mistake and shattered the glass frame. "I have one thing to offer you right now, and it's broken glass," the prime minister said, trying to improvise a joke during a joint news conference. It got worse.

Biden arrived in Israel, the third and most-senior U.S. official to do so in less than three weeks, mainly to talk about Iran. President Barack Obama's administration is worried that Israel might interfere with the U.S. plan to initiate international sanctions against the regime in Tehran by launching a pre-emptive strike against Iran's nuclear facilities. But apart from issuing restraining orders against Israeli F-16s, the Americans were also hoping to show progress on the Palestinian track. After many attempts, and many mistakes, it seemed by early March that both sides were willing to resume negotiations, though indirectly, mediated by U.S. special envoy George Mitchell. This was hardly a cause for celebration because everybody involved in the talks assumes there is only a slight chance of significant achievement in the near future. Yet Netanyahu managed to ruin even that. A few hours after Biden arrived in Jerusalem, Israel's Interior Ministry announced that approval had been granted to build 1,600 new housing units in Ramat Shlomo, an ultra-Orthodox Jewish neighborhood in northeast Jerusalem that borders the Palestinian neighborhood of Shuafat.

The units were authorized by the Jerusalem District Planning and Building Committee, the body in charge of approving such programs. It will be one of the largest construction projects launched by Israel in Jerusalem in recent years. It is also seen as a direct insult to the vice president because the Obama administration had emphasized numerous times during the last few months its strong reservations against Jewish neighborhoods expanding beyond the Green Line (1967 borders) in East Jerusalem. Ramat Shlomo lies beyond that line.

Biden reacted immediately. In Washington, the White House issued a statement condemning the decision, while the vice president, acting in what was clearly an undiplomatic manner, arrived an hour and a half late to a formal dinner with the prime minister and his wife. Biden, it was explained, was busy on the phone with Washington, trying to figure out the appropriate U.S. response. Then on Wednesday in Ramallah, the vice president verbally attacked the Israeli decision, saying the housing plan "undermines ... the trust that we need right now in order to begin as well as produce profitable negotiations."

Why was it necessary for Netanyahu to embarrass Biden, a longtime supporter of Israel and a man the prime minister describes as a personal friend? Did Netanyahu even know of the plan to announce the decision during the visit? The answer to the second question is apparently negative, as Netanyahu has denied being in the loop. As for the timing, it might have been a coincidence because the committee was planning to do it anyway.

It wouldn't even come as a surprise to anybody following the Israeli bureaucracy closely. Many in the United States see Netanyahu as a hard-liner who isn't serious about peace. But seen from Israel, a perhaps more-important issue is the incompetence of some of his advisors. Netanyahu's government makes unnecessary blunders (such as the recent pointless insults to the Turkish ambassador in Tel Aviv) on an almost weekly basis, though usually the consequences aren't always so far-reaching.

For Netanyahu, the current disorganized construction in East Jerusalem and the West Bank is a feature, not a bug. Israeli governments, as a rule, find it useful to leave such district planning commissions with no supervision. "A righteous person's work is done by others," goes the old Jewish saying. Why should a minister bother to interrupt? If the construction goes unnoticed, Israel has succeeded in creating "facts on the ground" in a disputed area. If the plan is exposed, better not to be involved. East Jerusalem is not officially included in Netanyahu's pledge to freeze construction in the settlements for 10 months. But a close look at the situation in the West Bank will show that even there, the government and the settlers have found diverse ways to bypass the official decision. Settlers were granted permission to build hundreds of housing units just before the freeze was announced, and they are also allowed to complete houses for which the foundations have already been laid.

There is also a potential domestic political explanation for the latest crisis. Interior Minister Eli Yishai is the leader of Shas, an ultra-Orthodox party on the right wing of Netanyahu's coalition. His ministry's decision will mostly help Shas constituents living in the overcrowded religious neighborhoods of Jerusalem. Yishai faces fierce competition from within his party, but unlike Netanyahu, the interior minister can afford some criticism from Washington. Actually, it might even help him among his voters.

Not surprisingly, the Palestinians could hardly curb their enthusiasm regarding the Israeli fiasco. While not very keen to achieve any progress in the "proximity talks" with the Israelis, Palestinian leaders are more than happy to see Israel take the blame for any obstacles to Obama's dream of peace in the region. Unfortunately, the outcome for Netanyahu might be even worse. At such a delicate time regarding Iran, Israel needs maximum cooperation and understanding from the Unites States. But after this latest scandal, Obama and Biden now have fewer reasons to trust Netanyahu's word.