Accessibility links
Greece Roiled By General Strike Over Austerity Plan Greek police fired tear gas to disperse protesters throwing rocks and firebombs outside Parliament as tens of thousands of people marched through Athens to protest measures to cut the country's debt. The strike grounded all flights and brought public transport to a halt. 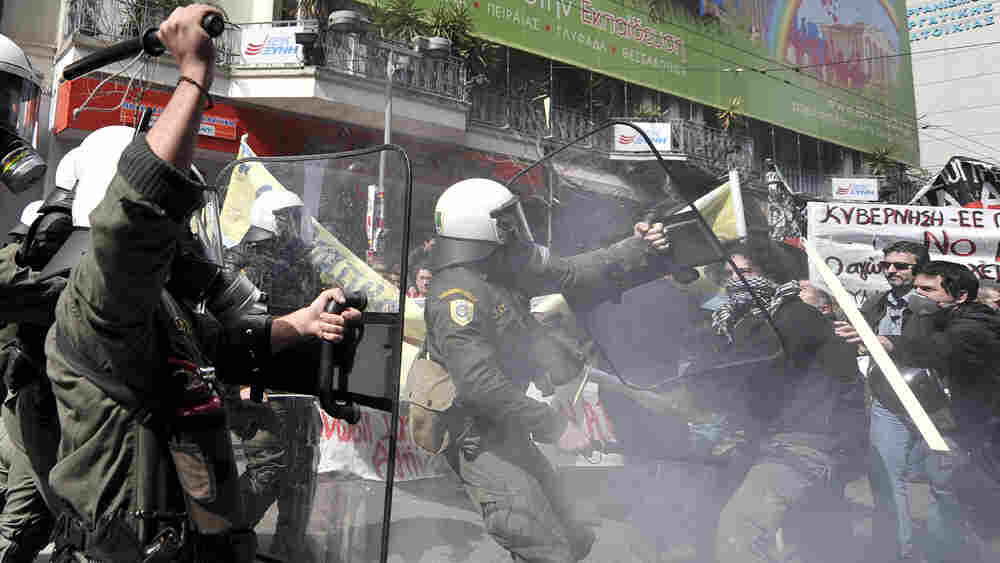 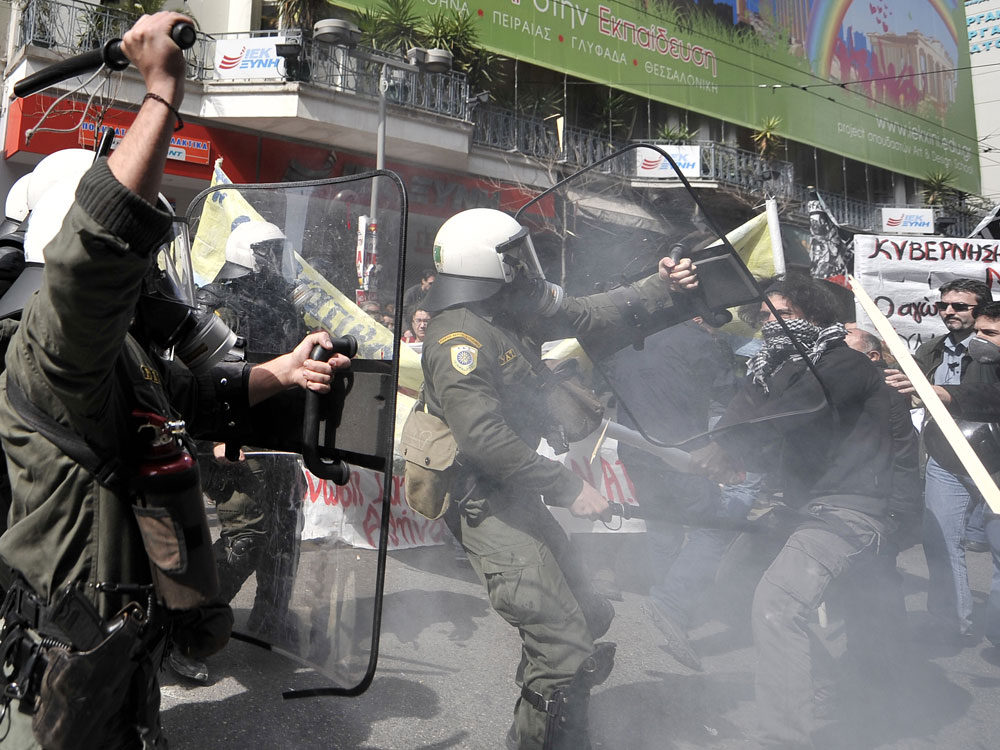 Riot police clash with demonstrators Thursday in Athens during a general strike to protest the government's austerity plan to solve the country's debt crisis.

Greek police fired tear gas and stun grenades at masked protesters in the heart of Athens on Thursday, as hundreds of thousands of union members went on a nationwide strike that closed schools, grounded planes and left hospitals staffed for emergencies only.

Labor unions are protesting harsh new austerity measures imposed by the government to try to cut the country's massive debt and restore confidence in the euro. 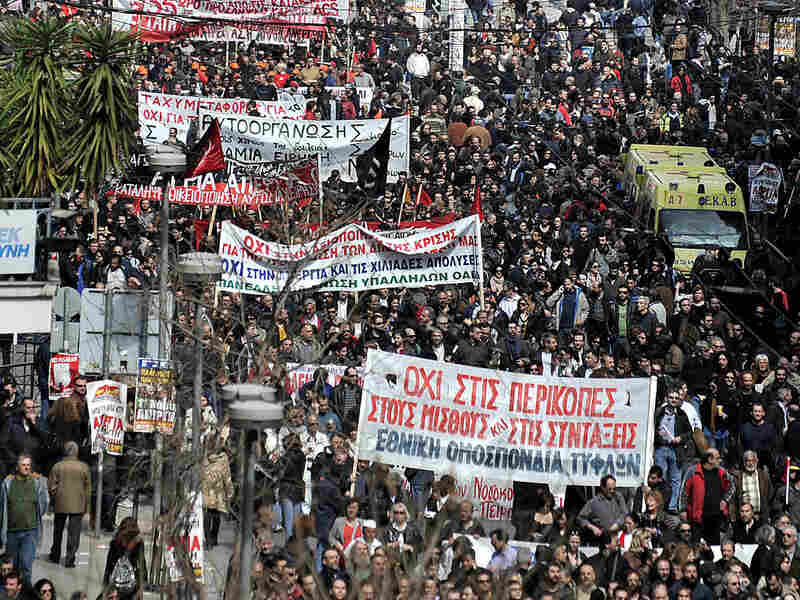 Tens of thousands of workers took to the streets of Athens on Thursday in the second nationwide strike in as many weeks. Aris Messinis/AFP/Getty Images hide caption 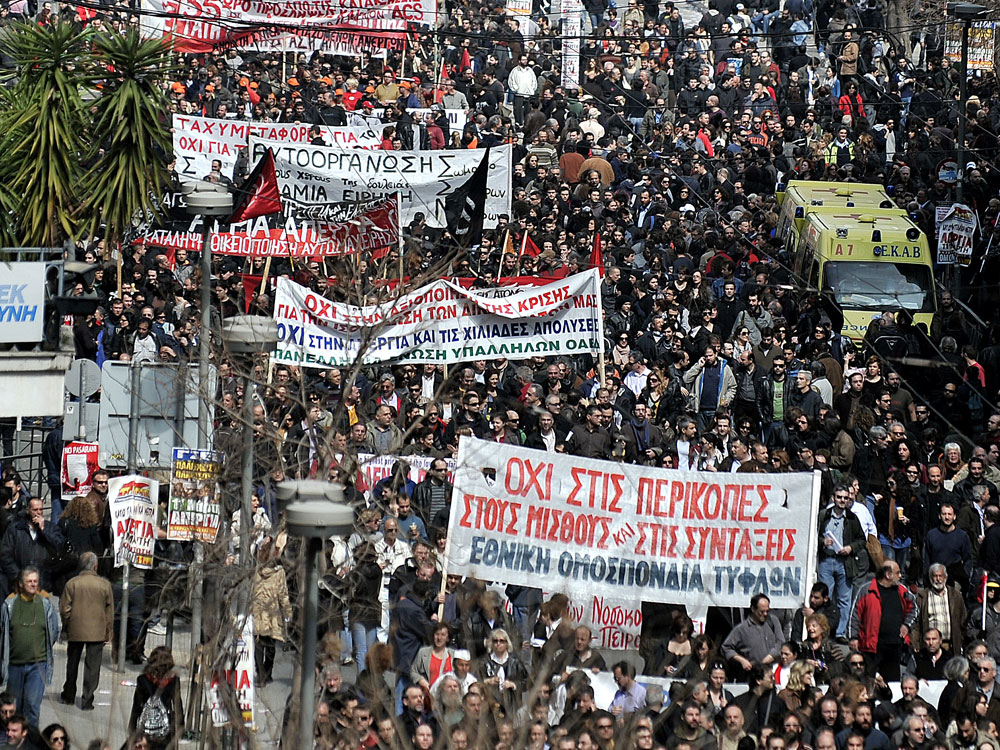 Tens of thousands of workers took to the streets of Athens on Thursday in the second nationwide strike in as many weeks.

Tens of thousands of workers — from garbage collectors to hospital staff — took to the streets Thursday in the second nationwide strike in as many weeks.

Protesters banged drums and chanted slogans such as "no sacrifice for plutocracy" and "real jobs, higher pay." People draped banners from apartment buildings that read: "No more sacrifices, war against war."

But hundreds of black-clad youths wearing crash helmets and ski masks threw stones and Molotov cocktails at police and used sledgehammers to smash more than a dozen storefronts. Riot police fired tear gas that drifted over the city center, forcing some residents to run for cover.

Minor clashes also broke out in the northern city of Thessaloniki, where about 14,000 people marched through the center.

The unions, representing more than 2 million Greek employees, say the austerity measures unfairly punish workers for the previous government's mismanagement. The measures, which officials say will save $65.3 billion, include cuts in civil servant incomes and a pension freeze, as well as an increase in the fuel and value-added tax.

"They are trying to make workers pay the price for this crisis," said Yiannis Panagopoulos, leader of Greece's largest union, the GSEE.

Many protesters, such as worker George Kuchukos, warn that the government should back off the austerity measures.

"Greece will have bigger problems if these cuts happen. If you cut the salaries, you cut the demand and the economy goes down," Kuchukos told NPR, adding, "These cuts will serve nothing."

But most analysts in Athens say the protests most likely won't have much impact.

Socialist Prime Minister George Papandreou's administration says it is sticking to its plan to cut Greece's debt, which has shaken markets and confidence in the euro.

Athens has come under intense pressure from the European Union to get its financial house in order as fear of a Greek default has undermined the euro for all 16 countries that share it.

The latest cuts, coupled with a previous $15.24 billion austerity plan, are aimed at reducing Greece's budget deficit from 12.7 percent of annual output to 8.7 percent this year. The long-term target is to bring overspending below the EU ceiling of 3 percent of GDP in 2012.

The government also is pledging to finally get tough on tax evaders and to crack down on corruption. 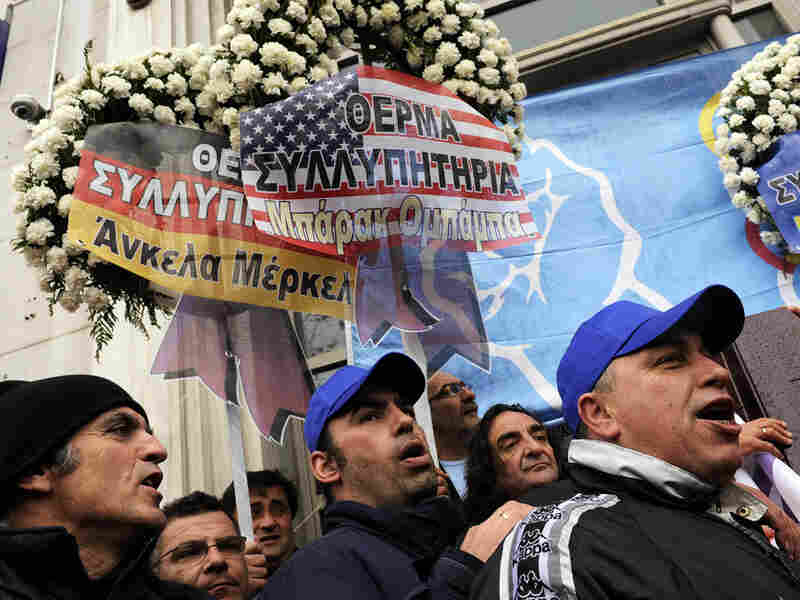 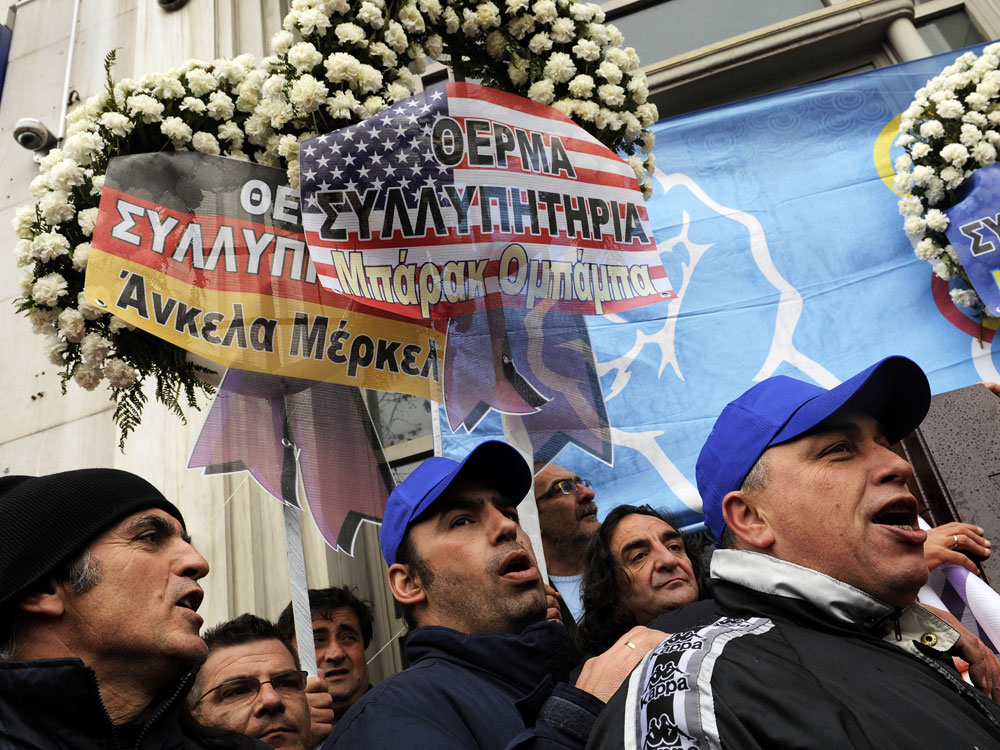 By law, Greek police and fire officials cannot go on strike. But that didn't stop about 200 uniformed police, coast guard and fire brigade officers from gathering at a square in the center of the city shortly before the marches got under way.

"The police and other security forces have been particularly hard hit by the new measures because our salaries are very low," said Yiannis Fanariotis, general secretary of one police association. He said the average policeman made about $1,360 to $1,635 a month if weekend and night shifts were included.

As taxi driver Panos Kanaloupitis waited for a fare in central Athens, he told NPR that the austerity measures are hypocritical. Tax evasion and petty bribery are widespread and the government does not bother to go after the rich, he said.

"I want to be honest. If I could do it, I would try to hide something," Kanaloupitis said. "The salaries here in Greece are one-third [that] of the average European."

In the eyes of many other Greeks, such as Cristos Arvenedis, who is unemployed, corruption is the main issue.

"All these years they've been stealing for the airport, for the Olympic games, for many, many things, he told NPR. "They're corrupt. They are putting a lot of money in their pockets."

Greece says it does not want an EU bailout, but the government has warned that unless the cost for it to borrow on the market falls, it might have to appeal to the International Monetary Fund for help.

On Wednesday night, Deputy Prime Minister Theodore Pangalos said Greece could bypass the costly process of borrowing from anxious markets by urging international institutions to buy its bonds at a set interest rate.

The Greek branch of the anti-corruption group Transparency International says the country has one of the largest underground economies in the EU. The government estimates that the untaxed, shadow economy in Greece is at least 30 percent of the declared economy.

Costas Bakouris, chairman of Transparency International Greece, said he hopes the current crisis will finally make the country realize that corruption is a threat to its future.

He added: "It is corruption that makes countries poor, not the other way around."

From NPR's Scott Neuman and Eric Westervelt, with additional material from The Associated Press