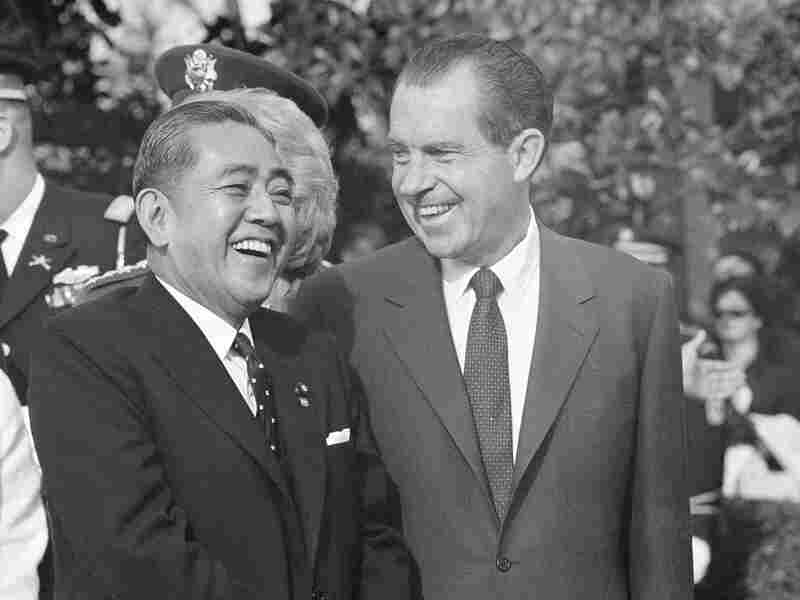 In this 1969 photo, U.S. President Nixon welcomes Japanese Prime Minister Eisaku Sato at the White House when the two leaders were holding talks concerning the return of Okinawa to Japanese control. This week, a Japanese government-appointed panel confirmed the existence of secret U.S.-Japan agreements, including ones signed by Nixon and Sato in 1969 allowing nuclear weapons in Japan. AP hide caption 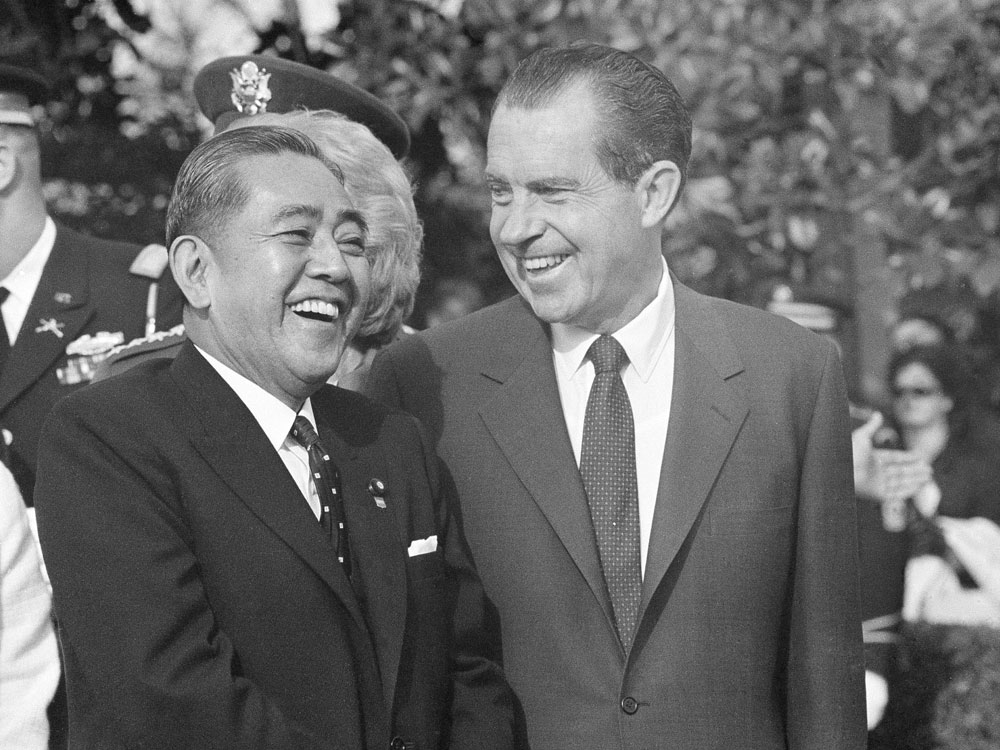 In this 1969 photo, U.S. President Nixon welcomes Japanese Prime Minister Eisaku Sato at the White House when the two leaders were holding talks concerning the return of Okinawa to Japanese control. This week, a Japanese government-appointed panel confirmed the existence of secret U.S.-Japan agreements, including ones signed by Nixon and Sato in 1969 allowing nuclear weapons in Japan.

Japan's government said this week that previous administrations had lied to the public for decades about atomic weapons. A government-appointed panel confirmed the existence of secret Cold War-era agreements allowing the U.S. to bring nuclear weapons into the country in violation of Japan's non-nuclear policies.

Foreign Minister Katsuya Okada announced the panel's findings on Tuesday, putting an end to decades of both official denials and public speculation. But while admitting that secret agreements existed, Okada was vague on the question of whether U.S. nuclear-armed vessels entered the country.

"We have never been able to categorically assert that no nuclear weapons were brought into Japan," he said at a press conference. "I believe it is impossible to completely eliminate such suspicions."

Since taking power last August, the Democratic Party of Japan has begun to overhaul the policies of the Liberal Democratic Party, which dominated Japanese politics after World War II. The investigation into the secret pacts is one of these efforts.

Admitting the secret agreements now should strengthen, not weaken, the U.S.-Japan alliance, says Hans Kristensen, director of the Nuclear Information Project at the Federation of American Scientists in Washington, D.C..

"I think it's in the interest of both nations to open up the books on this and try to clean out the skeletons from the Cold War closet," he says. "In this day and age, I think it's more about whether the Japanese and the Americans can figure out to how to adjust [their] nuclear policies to the realities of the post-Cold War [era]."

Japan is the only country in the world to have been attacked with atomic weapons. Following World War II and the bombings of Hiroshima and Nagasaki, Japan adopted a constitution that said it would never produce or possess nuclear weapons nor allow them on its soil.

The U.S. stored both tactical and strategic nuclear weapons on the island of Okinawa, which it directly administered until 1972. The weapons were mostly intended for use in the event of conflict with China.

I think it's in the interest of both nations to open up the books on this and try to clean out the skeletons from the Cold War closet.

Hans Kristensen, of the Federation of American Scientists

One secret pact signed in 1969 by President Nixon and Japanese Prime Minister Eisaku Sato allowed the U.S. to reintroduce nuclear weapons into Okinawa in times of emergency, and with prior consultation with Japan. The U.S. later said that port calls by nuclear-armed ships were not part of the deal.

Since 1958, the U.S. has maintained a policy of neither confirming nor denying the location of its nuclear weapons.

But this was no longer an issue, Okada said Tuesday, because the U.S. ordered its ships and planes to stop carrying tactical nuclear weapons in 1991. Okada has previously pointed out that the existence of the secret pacts was confirmed in declassified U.S. documents. The point of the panel's investigation, Okada said, was to restore the public's trust in Japan's diplomacy.

In Washington on Tuesday, State Department spokesman P.J. Crowley made no mention of Japan's non-nuclear policies and said the investigation was a Japanese affair.

"I don't think that it is going to significantly affect cooperation between the U.S. and Japan," he told reporters. "We understand the special sentiment of the Japanese people with regard to nuclear weapons and we have faithfully honored our obligations under the Treaty of Mutual Cooperation and Security and will continue to do so."

Kristensen says that during the Cold War, Japan faced a tough choice between seeking national security under the U.S. nuclear umbrella and telling the public the truth.

"It chose to be economical with the truth," he says.

That choice left a legacy of mistrust that still complicates the ongoing issue of reducing the U.S. military's footprint on Japan. It was also a somewhat unfair choice for Japan, Kristensen says, because the U.S. nuclear umbrella could have easily been provided by strategic nuclear submarines operating outside Japan.

The investigation's findings confirm what many Japanese already knew. Takichi Nishiyama, the Mainichi Daily reporter who uncovered one secret pact in 1972, remembers the day he obtained a Foreign Ministry document that proved the existence of a clandestine deal.

"This was clearly a violation of the constitution and a political act that should never have been committed," Nishiyama says. "I was both shocked and angered to see this."

Nishiyama's scoop could have become Japan's Watergate. Instead, Nishiyama was convicted of illegally obtaining the document via his relationship with a female Foreign Ministry secretary. The Japanese media did not pursue the story and Nishiyama was forced to quit his job.

"I don't believe that I did anything illegal," he says. "The problems that came up were my own personal matters and had nothing to do with any crime. I should have the freedom to conduct interviews as part of my work."

Nishiyama is now 79 and still fighting in court to clear his name.