Accessibility links
Cities Find New Ways To Reach Into Your Wallet Across the country, cash-strapped cities are coming up with novel ideas for raising money — imposing new charges on everything from sodas and plastic bags to library late fees and emergency-response services. With at least two more years of bad budgets ahead, look for cities to turn to niche taxes.

Cities Find New Ways To Reach Into Your Wallet

Cities Find New Ways To Reach Into Your Wallet 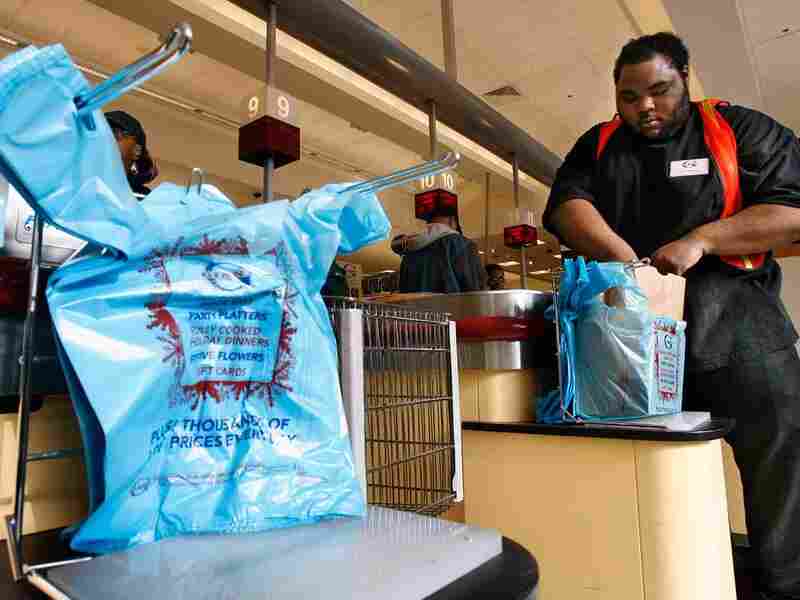 An employee bags groceries at a Giant supermarket in Washington, D.C. Officials in D.C. tout the city's new fee of 5 cents on plastic grocery bags as a way of cleaning up the polluted Anacostia River, which has become the final resting place for thousands of plastic bags. Jacquelyn Martin/AP hide caption 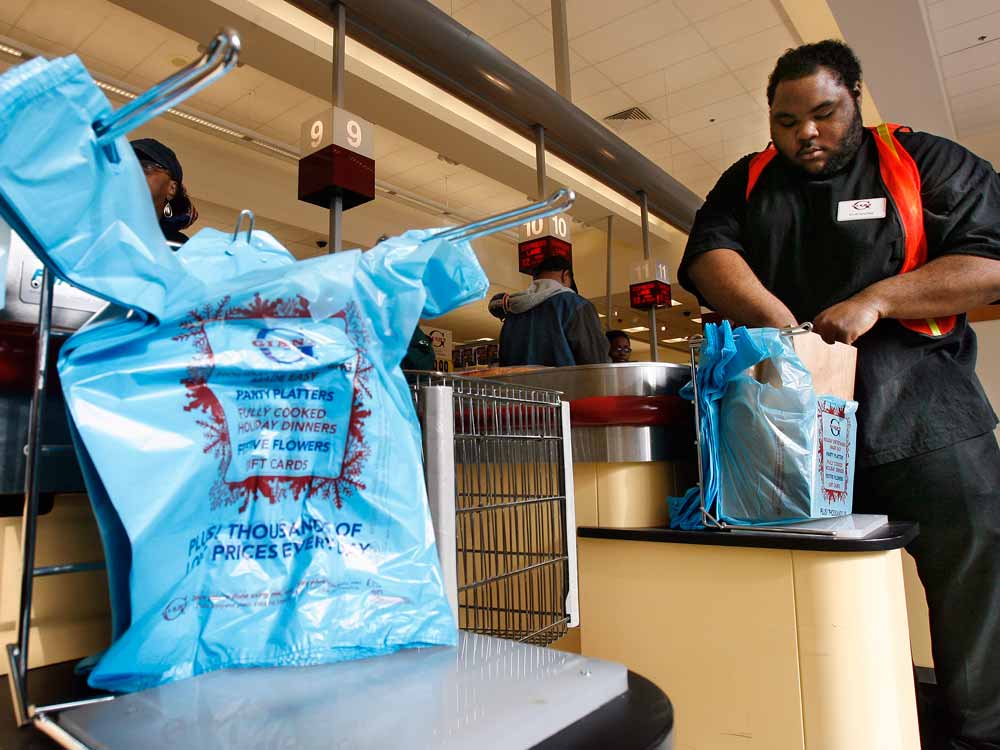 An employee bags groceries at a Giant supermarket in Washington, D.C. Officials in D.C. tout the city's new fee of 5 cents on plastic grocery bags as a way of cleaning up the polluted Anacostia River, which has become the final resting place for thousands of plastic bags.

You may love your hometown, but get ready to be nickel and dimed by it. Cities all over the country, strapped for cash, are coming up with some novel ideas for raising money, bit by bit.

These range from new charges for responding to 911 calls to taxes and fees on sodas, bottled water, groceries and grocery bags. One budget officer compares the annoyance factor of these niche taxes to having to pay baggage fees and other airline charges.

"Cities and states are going mostly after these kinds of sin taxes," says Justin H. Higginbottom, an analyst with the Tax Foundation, a conservative research group in Washington. "They'll target a politically unpopular industry and go after them to raise revenue. It's much easier to do that than to raise rates on sales taxes."

One reason sin taxes are easier to sell is that they aren't presented purely as ways to raise money. Mayors like to stress the idea that they're helping to curb bad behaviors.

Officials in Washington, D.C., tout the city's new fee of 5 cents on plastic grocery bags, which took effect Jan. 1, as a way of cleaning up the polluted Anacostia River, which has become the final resting place for thousands of plastic bags.

"It doesn't actually raise all that much money," says Charles Allen, chief of staff to District Councilman Tommy Wells, who sponsored the new fee. "The goal is cleaning up the Anacostia."

Similarly, Philadelphia Mayor Michael Nutter last week proposed a 2 cents per ounce tax on sodas — which would add up to $2.88 for a 12-pack of 12-ounce cans — because, he says, it's a tool for discouraging childhood obesity.

Dr. Donald Schwartz, who serves as both Philadelphia's deputy mayor and its health commissioner, says he's optimistic that the proposed soda tax will help cut down on consumption. But, he concedes, "Our No. 1 priority at the moment is revenue for the city."

There's no question that cities are in bad shape financially right now, with property, sales and income tax collections all on the decline. States are cutting way back on aid to cities, too. The National League of Cities estimates that municipalities will face collective shortfalls as high as $83 billion over the next three years.

But economists frown on what they call "Pigovian taxes," which are designed not only to raise revenue but put to governments in the position of trying to influence how people shop or behave.

"Social engineering through the tax code isn't the most efficient way to do it," Higginbottom says.

And city officials are aware of the contradictions involved in imposing sin taxes. You may have the health commissioner hoping people will cut back on sodas, but the budget director will quietly root for them to keep sipping.

"You're taxing behaviors we want to see reduced," says Chris Hoene, research director for the National League of Cities. "But if so, are you planning for revenues to go down as people change behavior, or are you planning on collecting that money?"

Even some city officials get frustrated when they encounter new fees. Michelle McGurk, a senior policy adviser to San Jose, Calif., Mayor Chuck Reed, describes herself as a heavy library user and certainly noticed when the late fee spiked to 50 cents per book per day.

"I'm one of those people who never turn books in on time," she says. "If you have five books checked out, it adds up pretty quickly. "

But McGurk recognizes that her boss has few good options. San Jose has had to cut its budget nine years running and faces a $116 million shortfall heading into its next budget year this summer.

And city officials in Phoenix, which started the year facing a $275 million shortfall, felt they had no choice but to impose a 2 percent tax on groceries. Phoenix, like most cities, faces limits imposed by state law on its ability to raise most kinds of taxes.

Sal DiCiccio, a member of the Phoenix City Council, said the food tax, which kicks in next month, "is absolutely the worst tax that could have been imposed. It's regressive and it's imposed on the poor."

But a broader sales tax increase was not feasible, says Cathy Gleason, the city's budget director, because of competition with neighbors. "You have to be concerned about raising your overall tax rate, because people can go and buy their cars in Scottsdale to avoid the sales tax," Gleason says. However, all of Phoenix's neighbors already charge a grocery tax.

Local officials are facing at least two more years of bad budgets and hard choices. Cutting salaries and benefits for unionized workers is politically difficult, and the public protests cuts to the highly visible services provided by cities, such as trash pickup, police and parks.

As a result, look for more cities to turn to niche taxes. They may not bring in enough money to fill large budget shortfalls, but for cities these days, every nickel counts.