Accessibility links
Computers One Step Closer To Reading Your Mind Clairvoyant computers may be nearer to reality than you'd think. In a new study, a computer program that analyzes brain scans was able to detect participants' thoughts — or at least their memories of a short film they were thinking about. 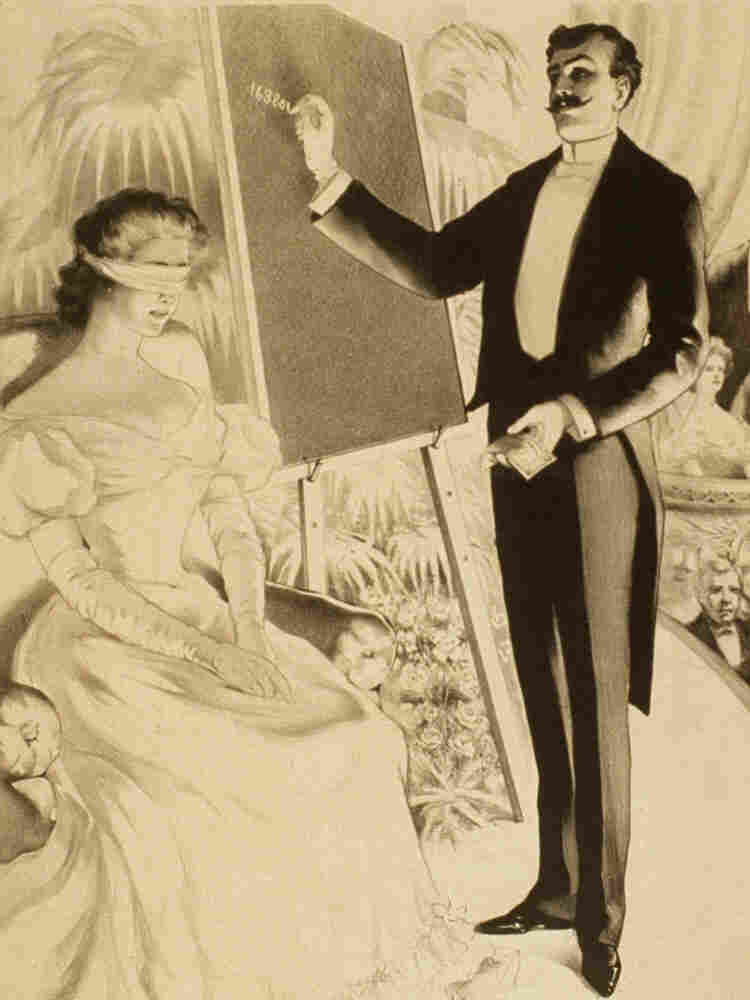 When this poster was printed in 1900, mind reading was still in the realm of magic. A new computer program capable of predicting individuals recollections has brought telepathy a small step closer to science. Library of Congress hide caption

Machines that decode your thoughts aren't limited to the realm of science fiction anymore.

A computer program that analyzes brain scans was able to tell which of three short films people were thinking about, according to a study in the journal Current Biology.

"We were able to predict just from their brain activity which of those memories they were recalling," says Eleanor A. Maguire, one of the study's authors and a professor of cognitive neuroscience at University College London.

This is a major step forward, Maguire says. But it falls short of what most people would call mind reading. "We can't put somebody in a brain scanner and immediately know what thoughts they are having," she says.

The experiment was designed to learn more about a part of the brain called the hippocampus, which seems to act as a sort of index for memories of events in our lives, Maguire says.

She and her colleagues wanted to know whether traces of these so-called episodic memories could be detected in brain scans.

So they found 10 volunteers who agreed to watch several very short films. One showed a woman taking a letter out of her handbag and putting it in a mailbox. In another clip, a woman finishes a cup of coffee and throws the cup in a trash can.

The volunteers watched the films over and over, until they had formed a strong memory of each episode. "Then we popped the people in the scanner and had them recall these movies," Maguire says.

Data from these scans of activity in the hippocampus was analyzed by a computer program that looked for distinct patterns of activity associated with each film. And Maguire says the program found them. "In every single case it was able to predict with high accuracy which of the memories those 10 participants were recalling," she says

That was what the scientists expected to find. What surprised them, though, was how similar the patterns were across all 10 brains. The brain activity associated with each film clip "was incredibly consistent," Maguire says.

'Surprising Consistency' Of Our Minds

Other scientists doing similar work have also found surprising consistency from brain to brain. And they say that's the case for lots of thoughts, not just episodic memories.

"We all have very similar patterns for a given concept," says Marcel Just, director of the Center for Cognitive Brain Imaging at Carnegie Mellon University in Pittsburgh.

Most brains react in pretty much the same way when they see a face, for example, Just says. And by studying a particular brain in detail, it's often possible to get much more specific information, he says. He pointed to the work of researchers at Carnegie Mellon, who have been asking people to think about the faces of various family members. In many cases, "we can decode which one they're thinking about," Just says.

Volunteers From The Audience No Longer Needed?

So far, mind-reading experiments have relied on the cooperation of the people whose minds are being probed, Just says. Volunteers need to make a concerted effort to think about something over and over so the computer program can detect a pattern.

So, at the moment, it's not possible for anyone to use a brain scanner to forcibly search someone's memories, Just says. But he says the ability of machines to detect what someone is thinking is progressing with remarkable speed. "At the extreme, maybe we could decode somebody's dream while they're dreaming," Just says. "Is that possible? Not this year. Not next year. But I think that's doable."

Just says once the technology reaches that point it's likely to touch off a societal discussion about who is allowed to see what's in our brains.