Accessibility links
No Ink, No Paper: What's The Value Of An E-Book? The electronic publishing revolution is under way, and for consumers, it could mean paying less than ever for books. But some publishers fear lower prices could spell the end of the industry. 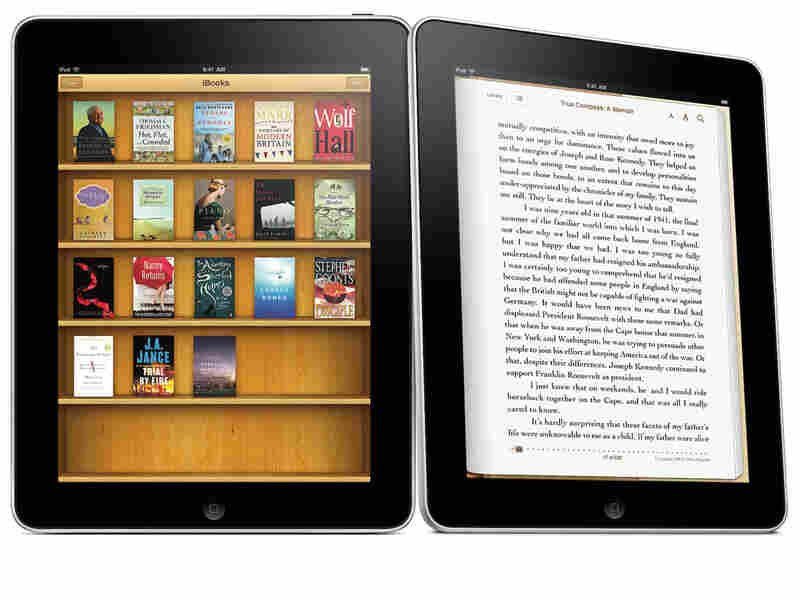 Apple says its iPad will be available April 3. Five of the six major American publishing companies have agreed to deals that will provide Apple's new iBook store with content at a higher price than Amazon's Kindle. Courtesy of Apple hide caption 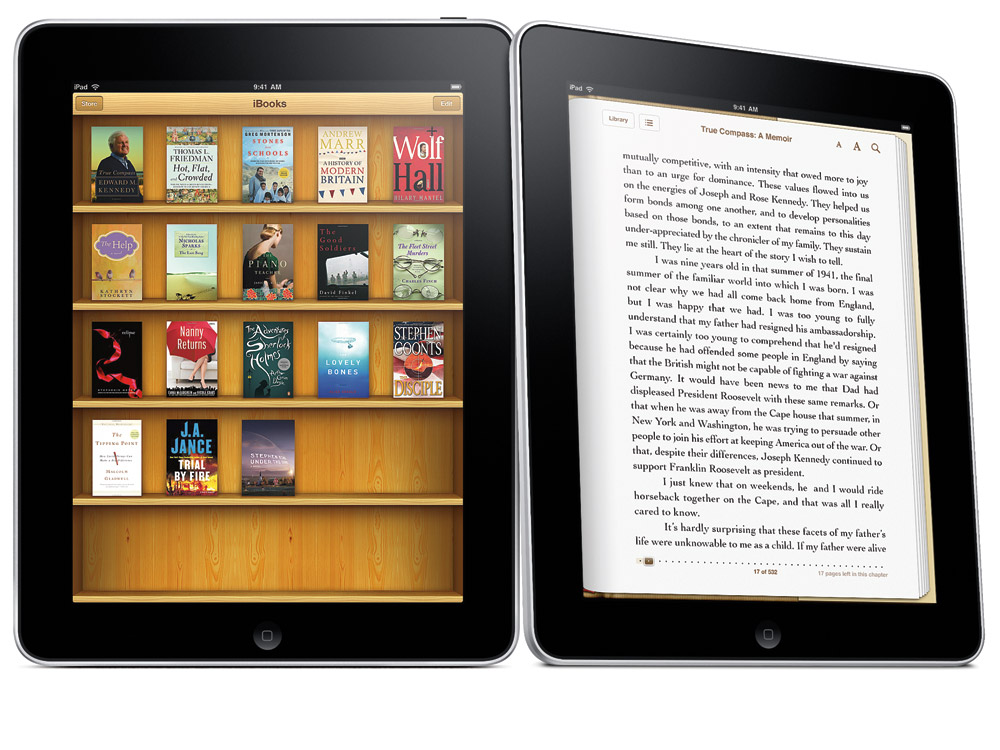 Apple says its iPad will be available April 3. Five of the six major American publishing companies have agreed to deals that will provide Apple's new iBook store with content at a higher price than Amazon's Kindle.

The growing popularity of e-books has raised a difficult question in the publishing marketplace that used to have an easy answer: What's a book worth?

Because they cost less to produce, consumers think e-books should be cheap. But publishers are afraid that if the price goes too low, they may never recover from the diminished expectations.

Some observers wonder if the publishers' pricing strategy is short-sighted. Jason Epstein, a well-known editor, publisher and author who has worked in the business for more than a half-century, says e-books are "the most exciting event, as far as books are concerned, in 500 years."

In a recent article on the future of publishing in The New York Review of Books, Epstein, whose own view is that the technology is on the verge of utterly transforming the industry, wrote that many publishers fear that transformation will make their current model obsolete.

"There will be no inventory. There will simply be digital files, and they'll be available worldwide at the click of a mouse. This makes much of what publishers now do irrelevant: creating inventory, putting it in the warehouse, keeping track of it, selling it, shipping it. All that's going to go," Epstein says.

Each of these elements cost publishers money, which in turn increases the price of a paper book. But despite radical changes to the industry, Epstein says it's a mistake for consumers to assume that e-books should necessarily cost less than their printed counterparts, at least for the time being.

"There's serious misunderstanding there, because the publishing companies do today exist, and they do have all that overhead and they have to pay for it. And so that has to be figured into the cost of an electronic book," Epstein says. "It's not just the cost of transmitting a file. So it's misleading to think that just because there is no physical book that the costs all disappear. They don't."

E-books may be getting all of the attention in publishing these days, but the hype overshadows the cold reality of business: E-books are still just a small fraction of the market. James McQuivey, an analyst with the technology research company Forrester, says that's why publishing is in such a tough place: A revolution may be under way, but it is by no means complete.

"The problem publishers face is that they are organized around analog economics, you know, that are decades, if not centuries old. And so, from their perspective, cheaper books threaten that," McQuivey says.

Publishers may know that they can't stop the revolution, but McQuivey says they're trying to slow it down. Maintaining a higher price for digital books is one way of doing that.

The $9.99 price per e-book, set by Amazon for its Kindle e-reader, was a major source of frustration for publishers. So when Apple unveiled the iPad, which includes an e-book reader and store, they seized the opportunity to make prices more competitive. Most of the major publishing houses have negotiated a higher price for newly released e-books. But McQuivey says the inflation is a mistake.

"The pricing genie is already out of the bottle, because if you go to Costco, you go to Walmart or Amazon.com, you're going to find hardback books that have been available for two weeks that are on sale for $12 and $14," McQuivey says. "How are you going to explain to a customer that they should pay the same price for a digital edition? It just doesn't make sense."

Chris Dannen, a freelance writer who specializes in technology, shares the opinion that higher e-book prices don't make sense. Dannen is sympathetic to the industry's dilemma, but he believes publishers can trim a lot of fat from their budgets right now by cutting back on expenses like marketing.

"They should be pushing for people to convert to the new medium," Dannen says. "They can do whatever they want to support the old medium, the printed medium, but they have to get used to the idea of buying and reading electronically, simply because that's more profitable."

Embracing the e-books might mean leaving their old business model behind, but Dannen says publishers should be finding ways to make it easier, not harder, to buy e-books.

"If you have iTunes selling your books, you have this entire store right on everyone's desktop and you can expose them to a lot more," Dannen says. "You can just get them into the habit of buying books, and more importantly, you make the whole process of buying completely frictionless. I mean, when you buy something at Amazon, you have that one-click purchase power."

No matter what should be, and no matter how exciting the prospect of an electronic future for publishing, Jason Epstein warns that the new and old ways of getting a book to market will just have to compete with each other for the foreseeable future.

If questions of pricing eventually settle, the market for e-books could help young writers like Chris Dannen bring their work to the marketplace quickly and without much interference from management. But Epstein says publishers, even those that know e-books are the future, are not yet in a position to abandon their old ways of doing business altogether.

"One thing that publishers do have to consider in thinking of pricing is that they don't want to liquidate their existing retail structure by making it so inexpensive to get an e-book that people won't go to bookstores at all and then publishers will have no place to sell the 90 percent of the books they do create in the physical form."