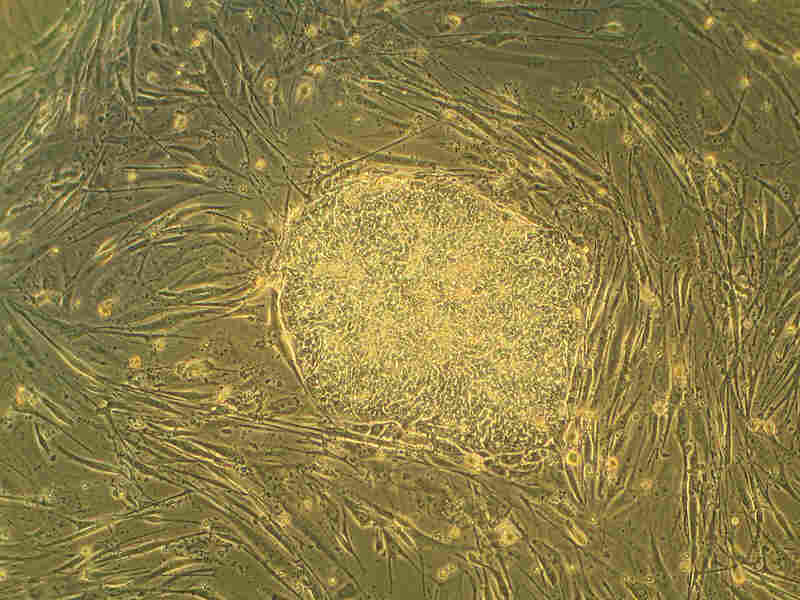 A magnified view of a colony of embryonic stem cells from the H9 stem cell line, one of the few lines approved for federally funded research under the Bush administration. These cells are now off-limits under a new policy set up by President Obama. Public Domain, via Wikimedia hide caption 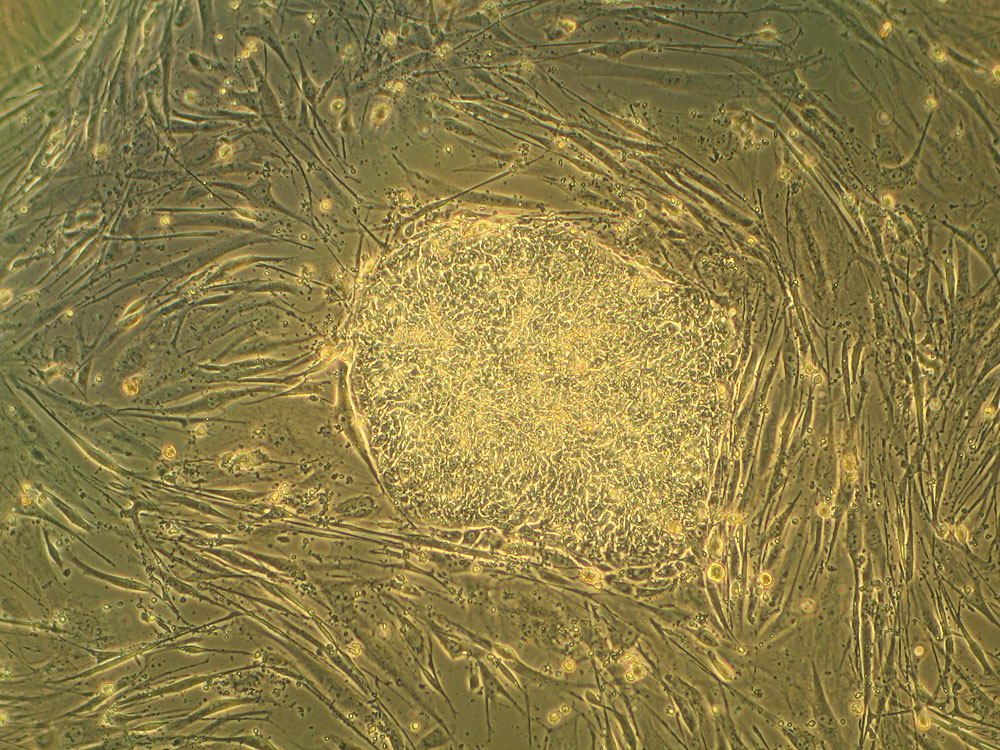 A magnified view of a colony of embryonic stem cells from the H9 stem cell line, one of the few lines approved for federally funded research under the Bush administration. These cells are now off-limits under a new policy set up by President Obama.

A bitter irony has befallen researchers who use federal money to study stem cells from human embryos.

Some of the old, dependable stem cells that were OK to study with federal funds under the Bush administration are off-limits so far under a new policy set up by President Obama.

Scientists welcomed that policy shift, which was announced back in March of 2009. It allowed the National Institutes of Health to set up a new system that has added more stem cell lines to its registry of those that are acceptable for use with federal funds.

But geneticist Julie Baker of Stanford University got a shock when she recently tried to apply for a new NIH grant. The online application kept sending her an error message when she tried to submit her proposal. "So then of course I panicked, and, you know, we had to try and figure out what was going on," Baker recalls.

The problem: Her application said her lab would be using a stem cell line called H9. But, "it looks like the H9 line, which is the line that we use for 99 percent of our work, is no longer on the NIH registry," she says.

Baker set up her lab to use the H9 cell line because it was accepted under the Bush administration. She doesn't understand why it's not on the new registry, and she's worried.

"It's a huge setback because we've spent about six years studying the biology of that particular line," Baker says, explaining that the cell lines all have unique properties and are not interchangeable. Her lab can't switch to a new one overnight. It would take months to get new cells growing, and her team would have to redo experiments.

"I mean, for 10 years, the government told us to use a handful of lines. And now they're telling us we can't use those lines," she says. "So they've just wasted millions of dollars and lots of resources, which just seems outrageous to me."

It's a strange turn of events for researchers who used to bemoan the restrictions of the Bush administration. Back then, they could only use federal funds to study 18 stem cell lines, says Christopher Scott, who directs Stanford University's Program on Stem Cells in Society.

"It's interesting to see that of the original 18 lines, only one has made it onto the new stem cell bank, which we could call the Obama bank," he says.

That's a problem because the whole field of stem cell science has been built upon a few lines from the old list.

For example, Scott and his colleagues recently did one study to see what cell line was used in 534 scientific publications during the period from 1999 to 2008. They found that the H9 line appears in 83.3 percent of the published research. Another line, H1, is in 60.9 percent of research reports, while a third, H7, is in 24.2 percent.

The H1 line is in the new NIH registry, but the other two are not. And if federal money can't be used for this kind of lab workhorse, Scott says, the new stem cell policy will be, in a practical sense, no better than the old one.

"If these lines are not grandfathered and put on the registry, then we'll be back to the Bush years, where researchers will have to be very, very careful about setting up their labs in two pieces," he explains.

One side of the lab would be reserved for cells that can be studied with federal grants, and the other side would be set up to work with cells using money from different sources. That's exactly the kind of unnecessary duplication that the new policy was supposed to fix.

The Need For Review

Francis Collins, the head of the NIH, says the new policy has been successful in expanding the registry and giving federally funded scientists access to many more stem cell lines.

"There are 43 approved lines and there are 115 more that have been submitted that are in the works of being reviewed," Collins says.

The NIH review checks things like whether embryos were donated with proper informed consent. And because the agency wants to be consistent, the old lines also need to get this kind of review.

But Collins says the NIH can't do a review until it receives an application. And applications have only been submitted for a few of the Bush-era lines. "We certainly have done everything we can think of to encourage those who developed those lines to submit the information," he says.

Those folks would be the WiCell Research Institute, a private nonprofit group linked to stem cell science at the University of Wisconsin-Madison. Its executive director, Erik Forsberg, says the only Bush-era line on the new registry, H1, is one of their lines. This popular cell line was made with an embryo from the University of Wisconsin, making it relatively easy to get documents for a new NIH application.

But Forsberg said H9 and some other WiCell lines came from embryos collected elsewhere. "So we have to work with another group to obtain the correct documents, which is what we're doing now," he explained.

He declined to name that group. But a 1998 research paper in the journal Science that described these cell lines makes it clear that the embryos came from the Rambam Medical Center in Haifa, Israel. Joseph Itskovitz-Eldor, a stem cell expert at that center, is the only author on that paper from Israel.

In a brief phone conversation, Itskovitz-Eldor said the lines hadn't been submitted to the NIH for approval yet because "it's a matter of paperwork" that was being gathered together. He said if researchers were worried that they'd no longer be able to use these important cell lines, to tell them that "they will."

Back at Stanford, Baker said her lab was "definitely going to start the process of obtaining some of the other lines just for backup just in case, you know, H9 disappears altogether, which would be tragic, from our point of view."

And in the end, to get that new NIH grant application accepted, she simply stated that the proposed research would be done with one of the stem cell lines on the NIH registry. She just hopes that H9, the one she has used for years, will get on there soon.